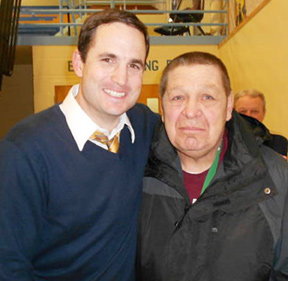 Sometime after the roar of the crowd finally settled down Saturday night at Dillon’s B.W. Lodge Gymnasium, you could probably hear Finny laughing.

Amazingly, Butte Central and Dillon fans alike stormed the court — “Finny’s Court” — after the Beavers upset Stevensville in the championship game of the Southwestern A Divisional girls’ basketball tournament.

The win meant the Maroons, the defending state champions, live to play other day. They they’ll play a challenge game against Stevensville at 7 p.m. Tuesday in Anaconda.

It also means the Beavers get a first-place trophy they will cherish forever.

That’s only part of the story, however.

The Beavers took the court after receiving a special play and some words of encouragement for the incomparable Coach Ron.

It was a page directly out of Finny’s play book.

For the few people who aren’t lucky enough to know Coach Ron Counts, let me back up for a second.

Coach Ron is a jack of all trades on the Butte sports scene.

He also sometimes moonlights as an umpire and director of the Butte High and Montana Tech bands.

Coach Ron also helps in security, and there was a brief time when he worked for the Butte Police Department.

Coach Ron is also a master at finding free food.

I first met him when I was a kid working with my mom in the concession stand at the Stodden Park softball fields.

Of course, Coach Ron’s money was never good there anyway.

Well, sometimes it was. Like when he’d throw a handful of pennies and nickels on the counter and say, “Is this enough for a hot dog and pop?” or “What can I get with this?”

Though I’m not sure he knows my name, Coach Ron knows me. He always knows to ask me about my children or for a ride home.

When the Big Boss had a heart attack and a wreck after work one night in 2002, Coach Ron was concerned. For the next few years, as sports editor Bruce Sayler worked hard at his recovery, Ron would ask “How’s Bruce?” every time I saw him.

Coach Ron definitely he has a heart that is eight times the size of the average heart. There’s not a bigger supporter of Butte, and Ron is the closest thing to complete innocence that you’ll ever find in a man.

Not every coach has appreciated Coach Ron’s help over the years, but all the good ones did.

One of those guys was legendary Dillon coach Craig Finberg.

“Finny always let Ronnie draw up a play,” Dillon boys’ assistant coach Tedd Stanisich says. “He’d know all the players, and he’d draw circles on the board and say ‘You, you, you.’ He’d draw a giant circle and say ‘(Jon) Skinner, that’s you.’”

Every time the Beavers played in Butte, Finny would use his secret weapon.

“They were tight as hell,” Norbeck said of the Beavers, who were about to take on — coincidentally — Stevensville in the state championship game. “Finny pulled Ronnie in the room, and the guys were laughing like crazy. Finny opened the door and said ‘Let’s go,’ and they went out and beat the heck out of Stevensville.”

The Beavers won 57-37 that night, and Coach Ron was the happiest guy in the gym.

Kevin Engellant, a former head coach of the Dillon girls and the Montana Western women, followed Finny’s lead several times with the Beavers and Bulldogs.

Now, Engellant is an assistant with the Dillon girls, and he was frantically searching the nut house that was the B.W. Lodge— the Dillon boys just won the divisional title — a few minutes before the girls’ championship game Saturday.

He found him just in time.

“He comes in and says ‘OK guys, you can do this,’” Engellant said of Coach Ron. “Coach Counts came in and drew up a play that we kind of forgot about in the first half. In the second half we finally went to it. I think he gave us a boost.”

Finny died of cancer three years ago. Before he left, though, he left a legacy of countless Dillon kids who can really shoot the basketball.

One of those kids was Gabe Walker, who is now the head coach of the Dillon girls.

Walker apparently learned more than how to shoot from the master.

“Coach Finberg would have Coach Counts come in and draw up a play for us,” Walker said. “He took it serious, and it kind of got us loosened up. So we thought we’d do it with the girls. It was a good-luck charm.”

The Beavers had eight wins and 10 losses going into the tournament. Stevensville — armed with a future Division I player in 6-foot-4 Alycia Sims — was 14-4.

The Yellowjackets led by 11 points in the first half as Dillon fans and Butte Central players and fans collectively held their breath.

Then the Beavers held Stevensville to just eight points in the second half, and players, coaches and fans from Butte Central and Dillon — two long-time adversaries — hugged each other on Finny’s Court.

Like everybody else, Stanisich, one of Finny’s best friends, walked around stunned. All he could say were things like “Wow” and “Can you believe that?”

Nobody could believe it because it was unbelievable.

It was complete and total Ronsanity.

Tears of joy filled so many eyes, and nobody was happier than Coach Ron.

Well, except maybe the man they called Finny.

— Sportswriter Bill Foley, who copyrighted the term ‘Ronsanity,’ writes a column that runs Tuesdays in the Standard. Follow him on Twitter @Foles74.

The Big Sky Conference is postponing its conference slate of football games to the spring semester because of the coronavirus pandemic, the league announced Friday morning following a vote of the Big Sky Presidents Council.

BILLINGS — Pete Conway was a standout player from a heady era of Montana basketball.

The Big Sky Conference is postponing its conference slate of football games to the spring semester because of the coronavirus pandemic, the league announced Friday morning following a vote of the Big Sky Presidents Council.

BUTTE — After a successful stint in Butte, Derek Selvig has his first head coaching job.

The Montana football team was supposed to kick off fall camp today. Instead, the Griz gathered at Washington-Grizzly Stadium to talk about the Big Sky Conference season being postponed to the spring. A look into what that scene was like:

Tournament is at Dehler Park Wednesday through Sunday.

Bill Speltz: Take it from someone who knows — ex-Griz Dante Olson has daunting hurdle in Philly

Without OTAs and exhibition games, it's even harder for someone like ex-Griz linebacker Dante Olson to make an NFL team in 2020.

Tournament is at Lewistown Thursday through Sunday.