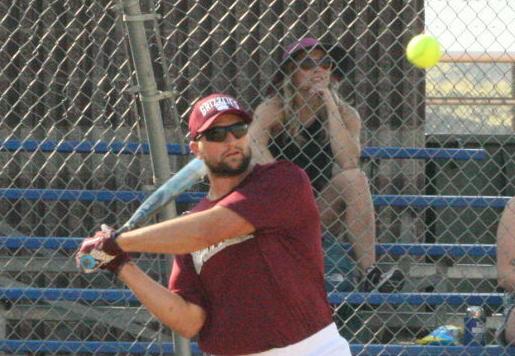 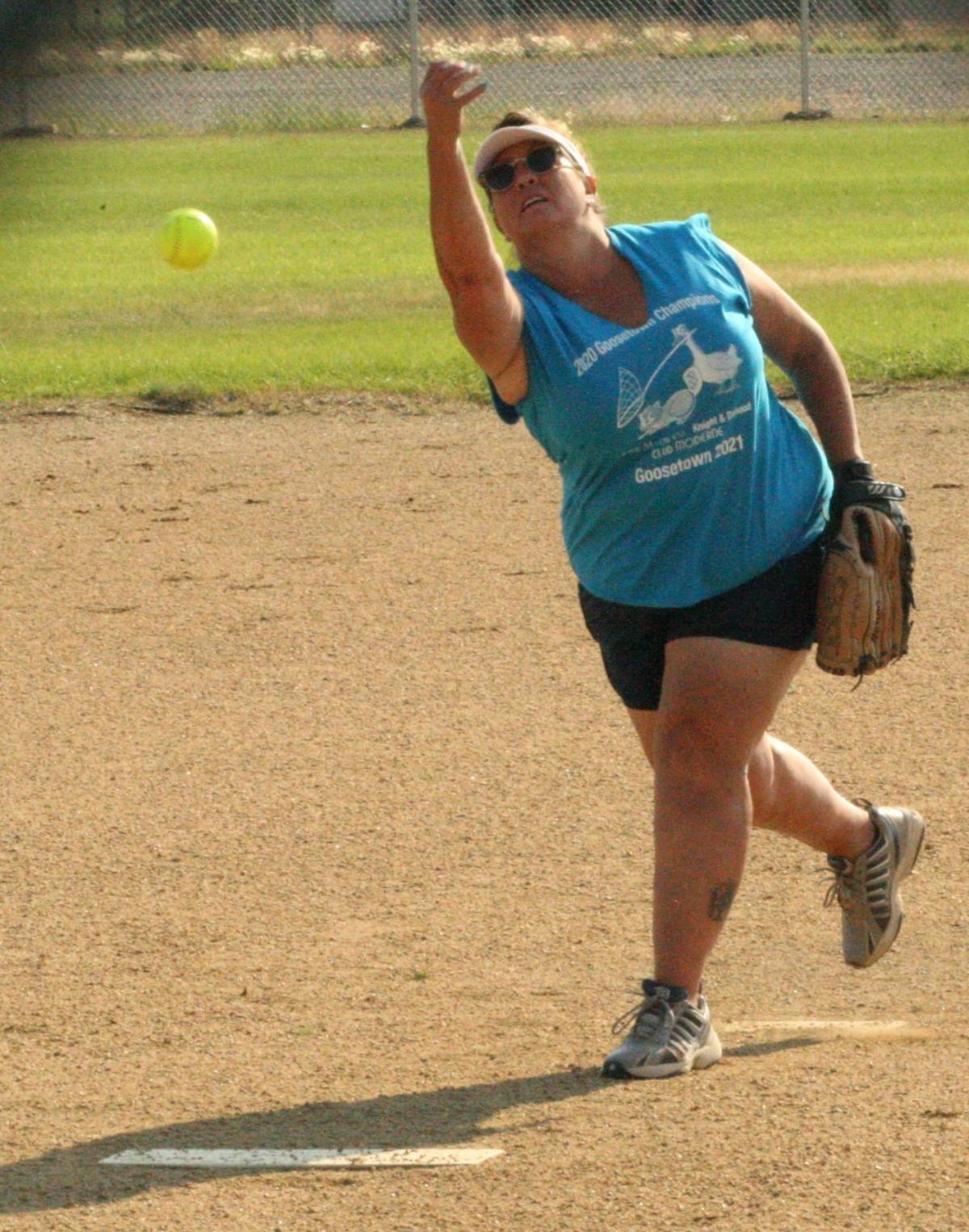 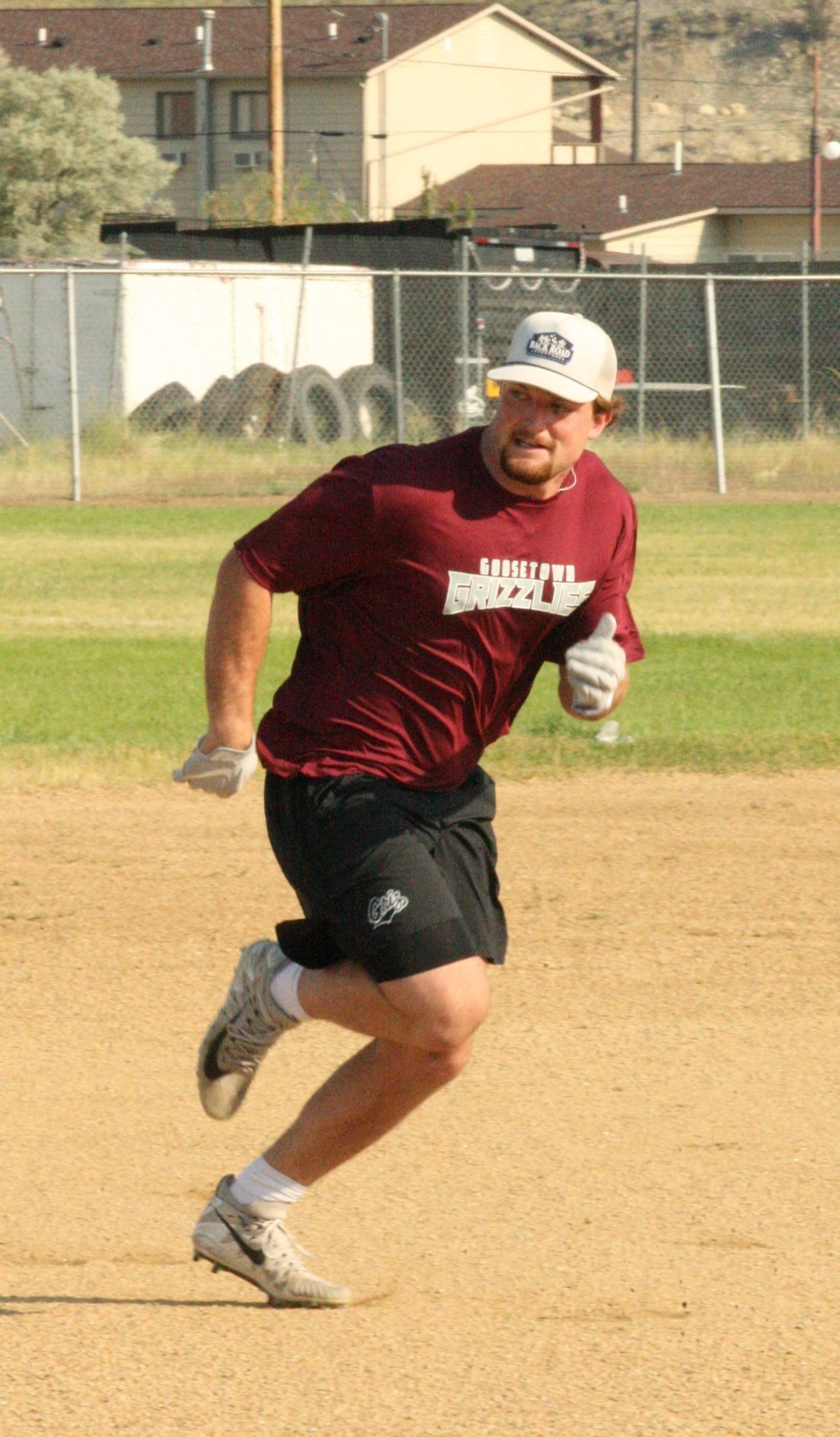 A Griz football player running to third base in Friday's Goosetown tournament.

ANACONDA — After the pandemic canceled the 2020 Goosetown softball tournament, founder Bill Hill was pleased to see teams from across the country gather in Anaconda for the 47th annual event Friday afternoon.

Hill worked diligently to bring the tournament back and was hard at work again Friday. But as he remained busy, slating the tournament bracket and answering questions, he smiled as he watched teams enter the facility to participate in what he had been working toward.

"We've got 50 out-of-state teams from all over the place," Hill said. "It's a huge economic boost for our economy, it's a shot in the arm for Anaconda. When we built this facility this tournament blew up. People just like Anaconda, they like Butte."

According to Hill, the tournament started small and began as a way for him to continue playing softball years ago. But as the tournament grew, he received a grant to build the facility just off of Montana Drive. Since then, the tournament has been a staple in Anaconda each summer.

Lodging has been a problem for tournament-goers in previous years due to the folk festival in Butte. But a new hotel, The Forge, opened in Anaconda on Friday just in time for teams to book a room.

"We have a hotel with 80 rooms that opened today and every room is booked with a waiting list," Hill said. "We have an RV park that opened three days ago and it looks like it's three-quarters full right now."

"I'm just glad to see people coming back," Hill continued. "We've got retailers from Portland and California, teams from Spokane and Boise. It's a big show for them, a big show."

Among those who travelled to Anaconda for "the big show" were a group of Montana Griz football players. Braxton Hill, son of Bill and Griz linebacker, told some of his teammates about his father's tournament and they gladly made the trip from Missoula.

One of those teammates was Trevor Welnel, an offensive lineman. He said that football has typically been his focus, so focusing on having fun through a different sport was an exciting change of pace.

"It takes your mind away, it gives you a little break but keeps you active," Welnel said. "We're here to win and have fun. Braxton's been talking about it for years so I'm glad to finally be here."

Welnel also said some of the Grizzlies played Legion and Little League baseball growing up, which could help them be a contender for winning the tournament this year. But one Anaconda team could pose a threat due to their experience and cohesiveness.

Dotsie Monaco, the Anaconda High School softball coach, has played in the tournament since it began and played with her team on Friday. She crowned her team the 2020 champions, even though the tournament was canceled.

"We're the 2020 champions even though it didn't happen," Monaco said. "We all got together as a team and rented a cabin at Georgetown Lake. We were here as a team."

While this year's event felt like a short trip or an escape for Welnel, it has been treated as a reunion for Monaco and her team. All originally from Anaconda, Monaco's team included players who travelled from California, Texas and Colorado, some of which have done so for more than 20 consecutive years.

Monaco, who has seen the tournament since it began, expressed the overwhelming growth of the tournament just as Hill did. She recalled memories of past tournaments, camping after games and bringing boomboxes to the field, and said the tournament has always been much more than softball.

"I remember we used to have parties down here, it's gotten bigger and better each year," Monaco said. "The bars and the community have just been so great. We come together every year for this time, then we all pile in a van and camp out at my house."

The Goosetown tournament includes more than 300 games over the weekend. The event has been maintained thanks to the work of the 80 people involved, according to Hill.

"We have about 4,000 people who come to this and we have next to no trouble. The Montana teams love it because now they get to play someone new from a new city, there's so much camaraderie in softball."

"It's a lot of hard work and it's stressful, but seeing it come together just makes you smile," Hill continued. "My goal is to get this to 50 years."

What was the craziest story in sports yesterday?

Will we see Max Scherzer traded?

Will we see Max Scherzer traded?

How may players on the Cubs will be traded before the deadline?

How may players on the Cubs will be traded before the deadline?

Butte High junior Max Kluck, 16, became the youngest winner in Butte 100 history on Saturday and did so to honor his best friend

With a victory under her belt, she is now more motivated than ever to see where the sport can take her.

Montana Tech's Becca Richtman followed her NAIA national championship performance with a victory in the Montana Mile on Friday.

After moving to Butte, pastor Victor Cline can now also pursue his interest in martial arts

"Life is tough enough. And it's good to have a place to go where you know you're going to grow and develop." — Victor Cline

A Griz football player running to third base in Friday's Goosetown tournament.