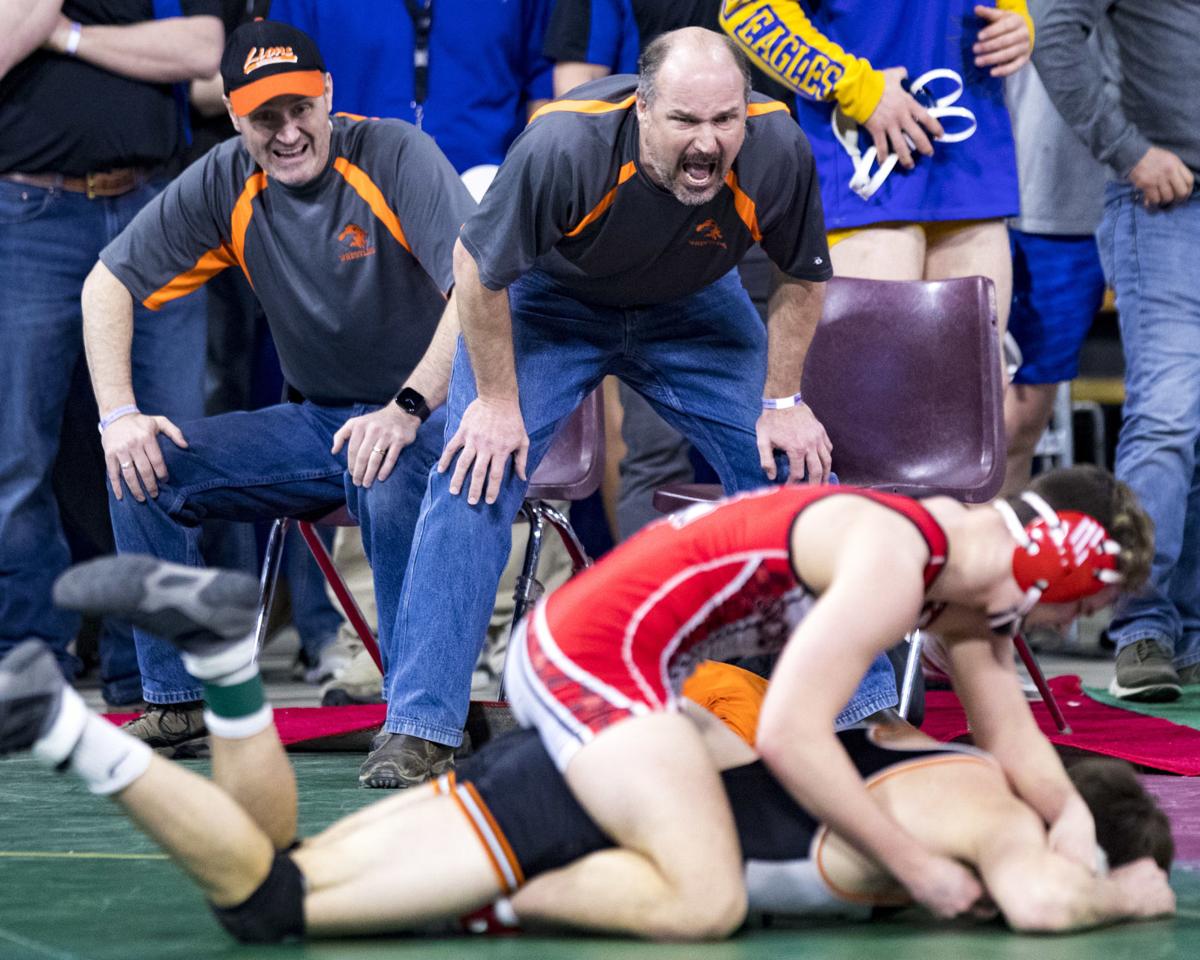 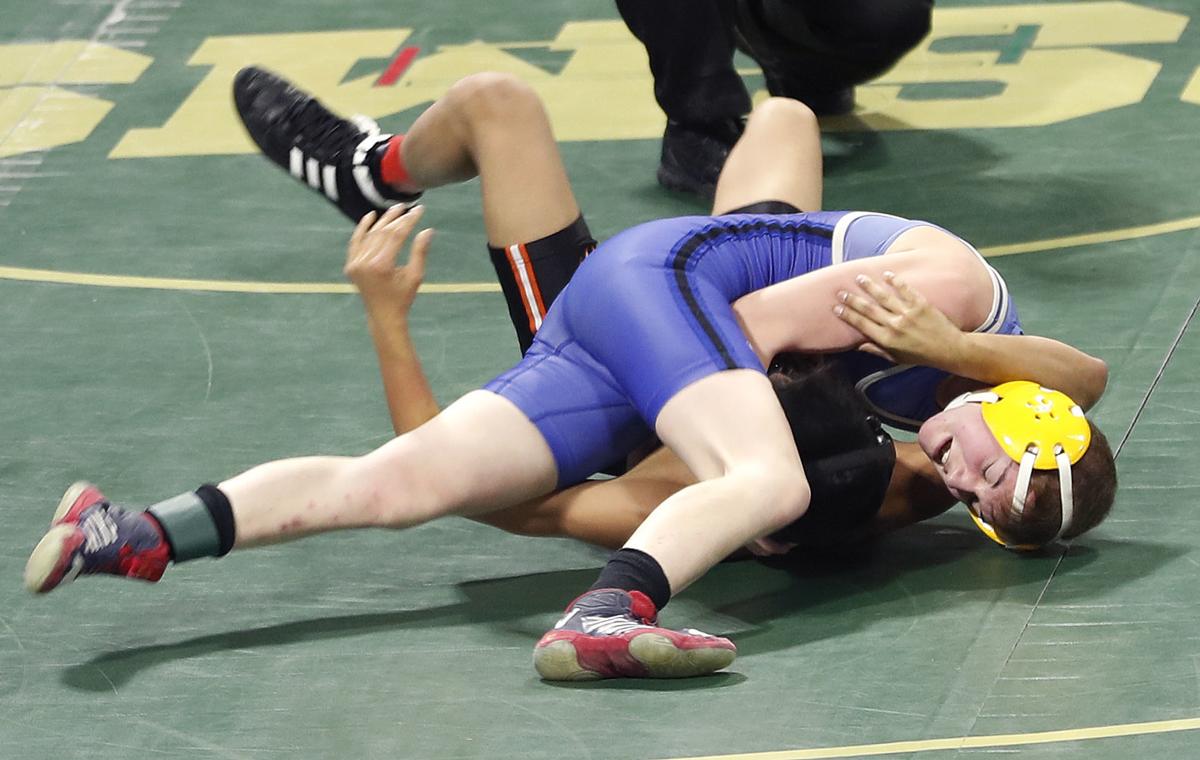 BILLINGS — It’s a heavyweight fight that seems destined for the 12th and final round.

The battle for the State B team championship could very well carry over until the final round on Saturday.

At the conclusion of wrestling on Friday at First Interstate Arena at MetraPark, Huntley Project held a six-point lead, 72-66, over Glasgow. Cut Bank was third at 55.5.

Whitehall was fourth with 55 points and Eureka was fifth with 49. Columbus-Absarokee was sixth with 47.5 points and Circle, the two-time Class C champion, was seventh overall at 46.5. Townsend held down the eighth spot with 45 points, St. Ignatius-Charlo was ninth with 42 and Shepherd was 10th at 34.5.

Colstrip, which had captured the past two State B titles, was tied for 11th with Superior-Alberton with 33 points.

Project has five wrestlers in the semifinals, which are scheduled to start at 9:30 a.m. Saturday morning, and Glasgow has four.

“It’s been back and forth. After the first round they were up and now we’re up,” Project coach Tim Kaczmarek said after the quarterfinal round concluded. “Both of us have lost some matches we’d like to win, but that’s the name of the game. You have to get back up, regroup and get one more win.”

Kaczmarek said he believed the semifinal and consolation quarterfinal round set to start the day Saturday would be crucial.

“It’s kind of going how I thought it would,” Glasgow coach Jory Casterline said. “We have to come up big in the blood rounds in the morning.”

Fast, who is undefeated in Class B-C this year, won the 126-pound state championship last year as a sophomore. After claiming the Eastern Divisional last weekend, he is now a state semifinalist after winning 6-2 in the first round and scoring a fall in 3:04 in the quarterfinals.

“My top work has been great. I have been flat on my feet,” Fast said. “I need to move my feet more and keep moving forward and not think about the past.”

When asked why he wouldn’t want to think about the past, as he’s had plenty of success, Fast replied: “There are some things I still need to work on. No one is perfect.”

Fast said the Scotties are doing what they need to in order to contend for the title.

“We are getting pins and majors. Everything matters,” he said. “Every bonus point counts.”

Selman is excited to be in the semifinals. His dad took him to the meet as a youth and Selman said it was a fun time. Now, he is one match away from wrestling in the finals.

“I love it here,” Selman, who placed sixth at 170 pounds as a freshman last year, said. “I can’t wait for tomorrow. It will be so fun watching the finals. That is my favorite part is watching the three mats go out. I love the experience.”

Selman said the Red Devils are a close team and wrestling well.

“Our team is doing really solid and I’m happy,” he said. “We have a bond with our team. It is great. To do this with these guys is great.

Columbus-Absarokee-Park City brothers Tanner Cook (120) and Cooper Cook (126) are both in the semifinals, something they’ve dreamed about since they were young grapplers.

Tanner Cook, a senior, is 34-0 this year and is 147-5 in his career. Last year, he became the first state champion in the history of the Columbus-Absarokee-Park City program, capturing the 113-pound bracket.

He said this season he has won all but five of his matches by technical fall or pin.

“My goal this year was to dominate and leave no doubt I’m the best 120 pounder in the state,” said Cook, who plans on wrestling at the college level but is undecided upon a school. “That’s been my goal all year.”

Tanner Cook said he and his brother push each other in the wrestling room.

“We’ve been training partners our whole life,” he said. “We push each other to be better wrestlers. He’s a big asset to me and the team. He’s a big point scorer and pushes me to do better.”

Cooper Cook is a sophomore and he placed sixth at state last year at 120.

“It’s an amazing feeling to be in the semifinals with my brother,” he said.

Cooper Cook explained he has a close relationship with his brother.

“Every match we’re just there to support each other,” he said. “Nobody else will be there like your brother. Your brother always has your back.

“Win or lose it’s always fun to be there with your brother, you’ll never get a moment like it.”

Cooper explained that he and Tanner would visualize their semifinal matches before they fell asleep Friday night.

“We know what we have to do,” Cooper said. “We have to eat right, make the weight and go out there and perform. You always have to be hungry. I’m in the semifinals, but I’m not satisfied. You can never be satisfied.”

Eureka senior Hank Dunn bested Kaden Zimmerman of Glasgow 7-2 in the quarterfinals at 152.

Dunn said he improved to 2-0 vs. Zimmerman, having beaten him when they were both freshman in the first round at state.

“It seemed fitting to have another one,” Dunn said of the rematch three years in the making. “It’s cool. Wrestling always has a way to bring things around full circle.”

Dunn was third at state last year and runner-up in 2018. He was fourth as a freshman.

“I only have one spot left on the top four spots on the podium,” he said. “My goal is to take that one. I’ve been on the other ones too many times. Once is enough for me.”

Eureka junior Gunnar Smith, in search of a third state title, won both of his matches by fall and is scheduled to battle Camron Reilly of Forsyth in the semifinals. Reilly, a junior, was third at the state tourney at 120 pounds last year and won the state title at 103 in 2018.

Colstrip's two returning state champions, Rylin Burns (160) and Trey Yates (285), are both in the semifinals.

Yates is scheduled to meet Phipps. On the other side of the heavyweight bracket, Grimsrud will battle Ruebin Swenson of Chester-Joplin-Inverness. All four were state placers last year when Yates was first, Grimsrud second, Phipps third and Swenson sixth.

Shepherd sophomore LeeAnn Hoch — one of seven girls total, including six in the B-C to qualify for state — won her first-round match with a pin in 3:49 over Pancho Ibenez of Eureka. Hoch trailed 11-0 when she registered the pin.

Although Hoch had wrestled many times at the Montana Open, which is a youth tourney held at the Metra, she said she was nervous for her very first state tournament match. She wrestled last year, but did not qualify for state.

"I should have tried harder in the first couple of rounds," she said. I was getting kind of shy, the lights were getting to me."

Hoch fell by fall in the quarterfinals, but bounced back to win a 14-0 majority decision over Harley Wade of Simms, another female competitor, in her second-round consolation match.

The MHSA is sanctioning girls wrestling as a sport next year, and at the state tournament, girls will only wrestle girls. During the regular season, girls will also wrestle boys next season. Hoch said she'd wrestle either way and hopes to continue the sport in college.

"I'm kind of used to wrestling guys," she said. "I've been told by many coaches I'll destroy all the girls. I've been wrestling guys since kindergarten."

Zadick, 80, had served as a youth coach and tournament worker and was the father of Montana legendary wrestlers Bill and Mike Zadick.