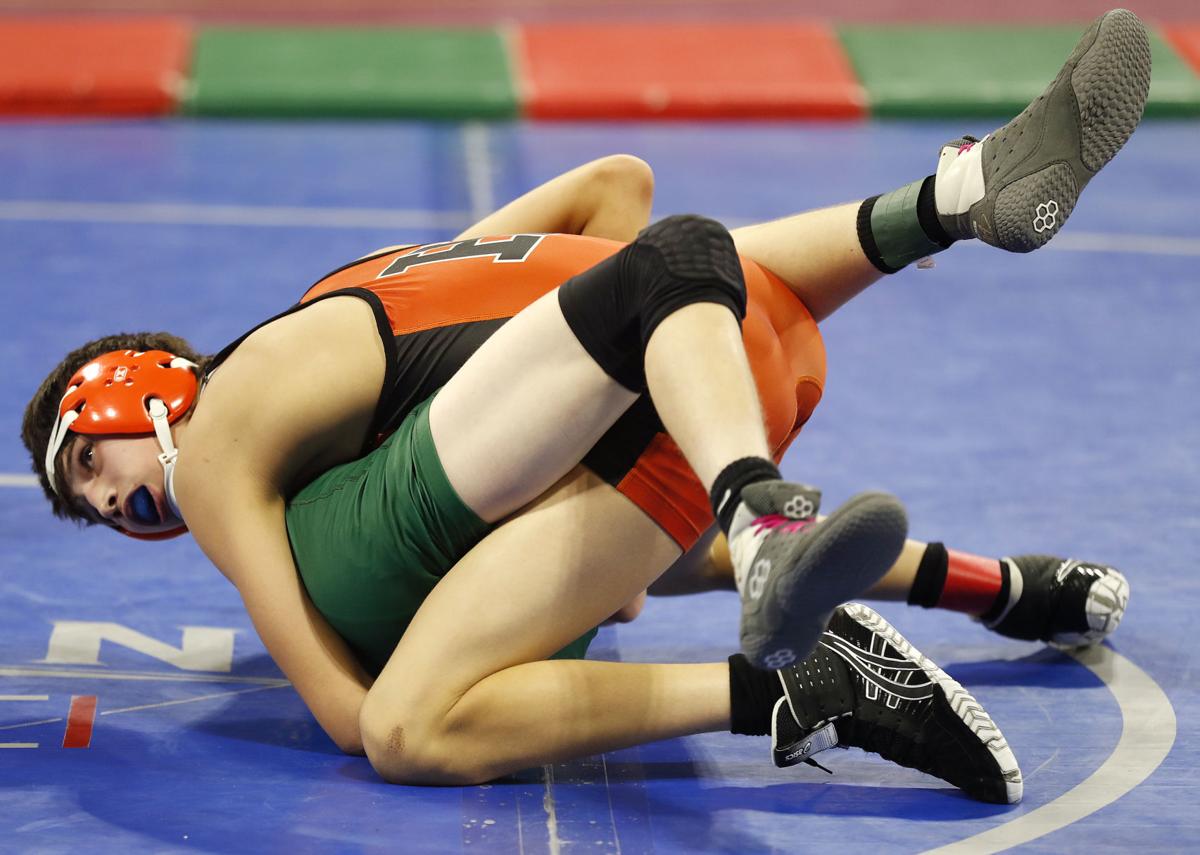 Hardin's Sean Mehling looks up as he wrestles Whitefish's Jackson Carson in a Class A 126-pound match. 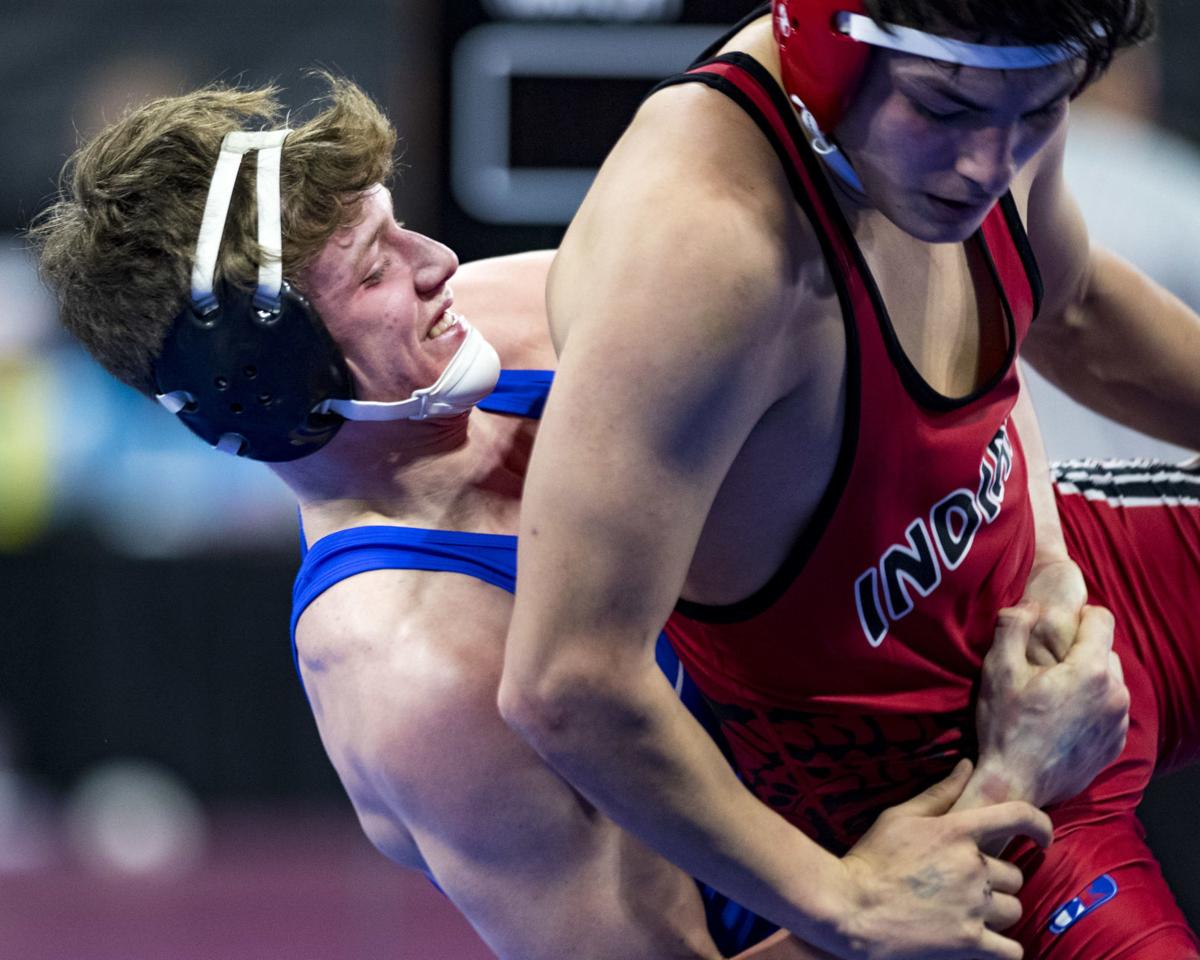 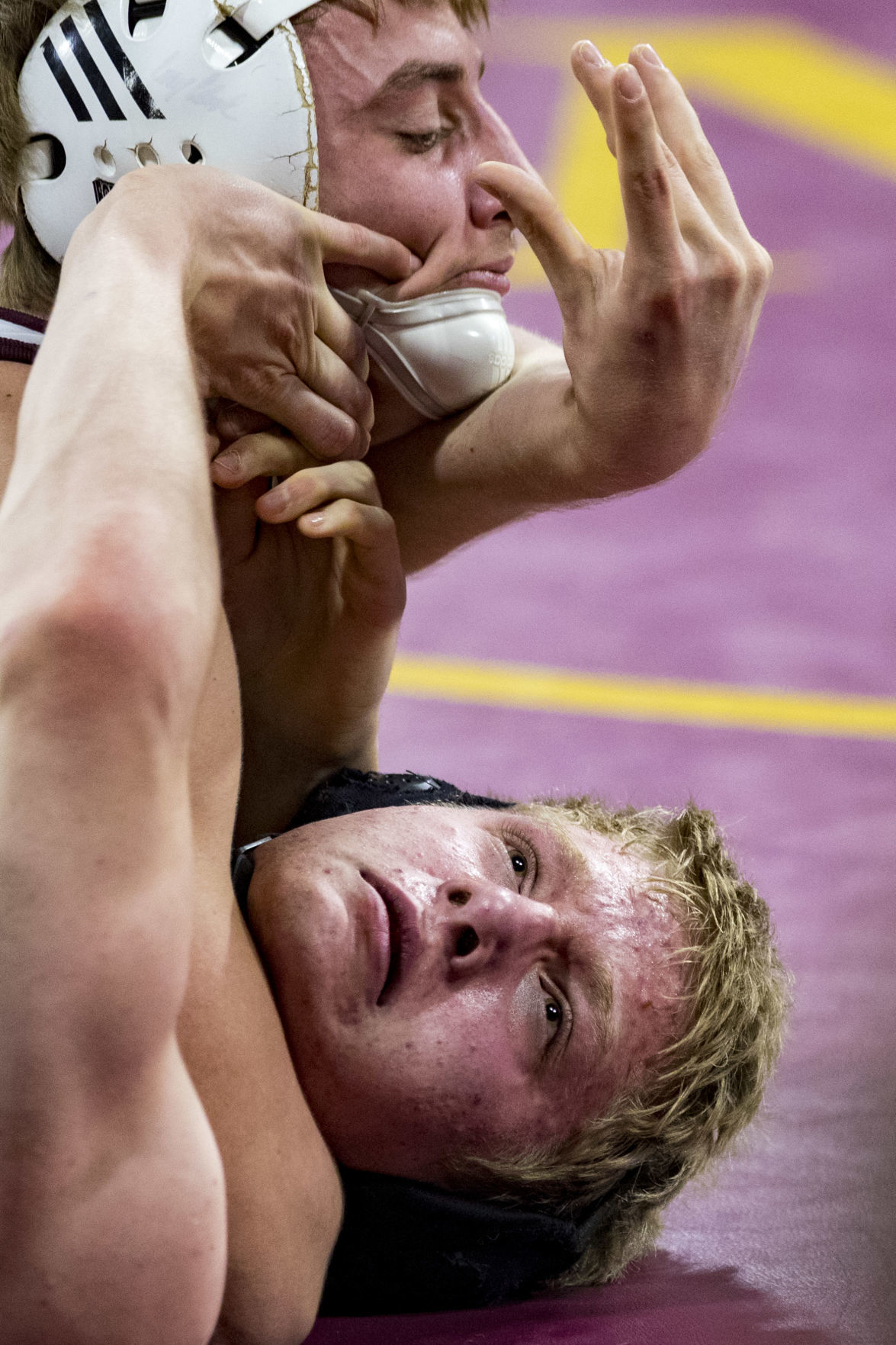 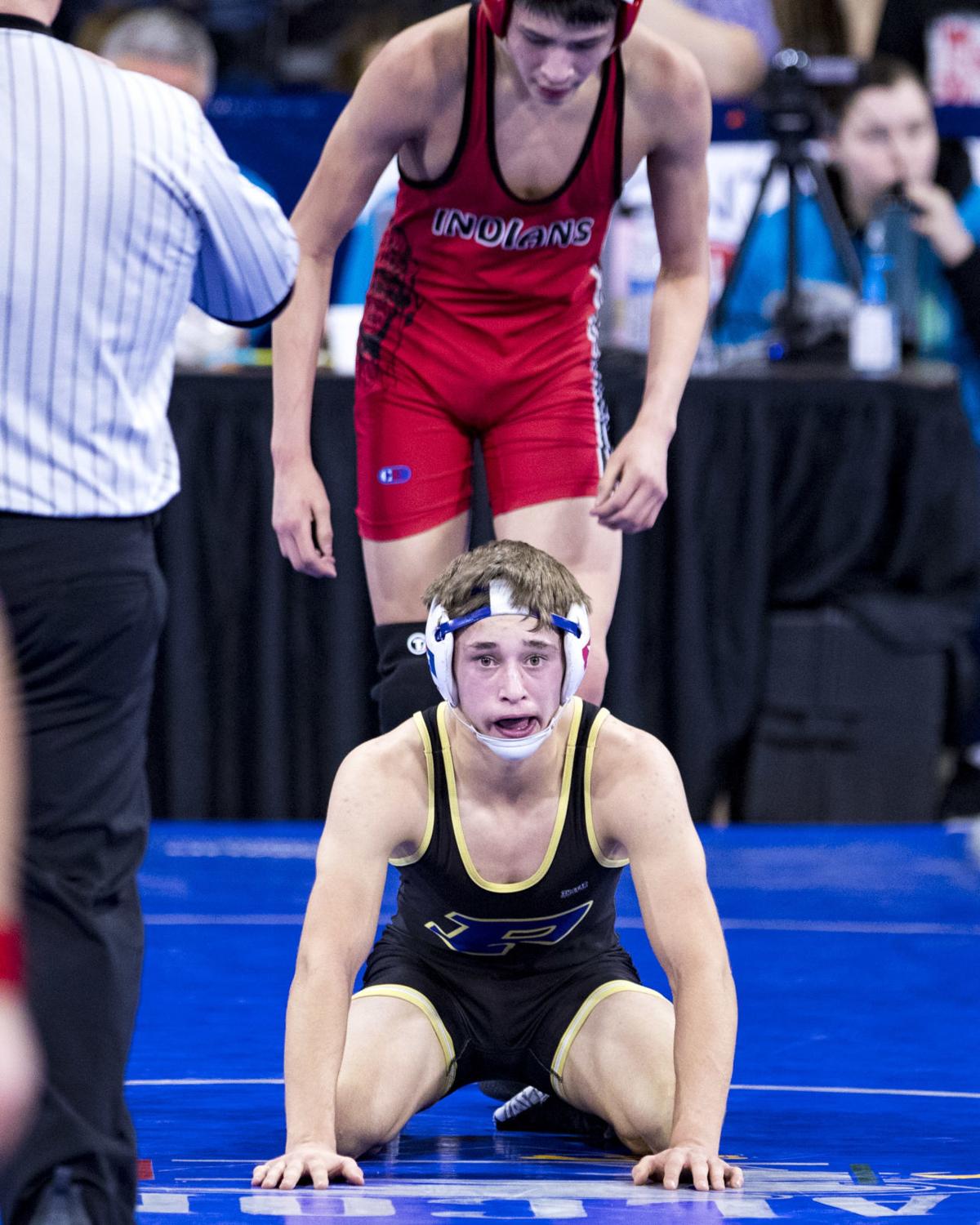 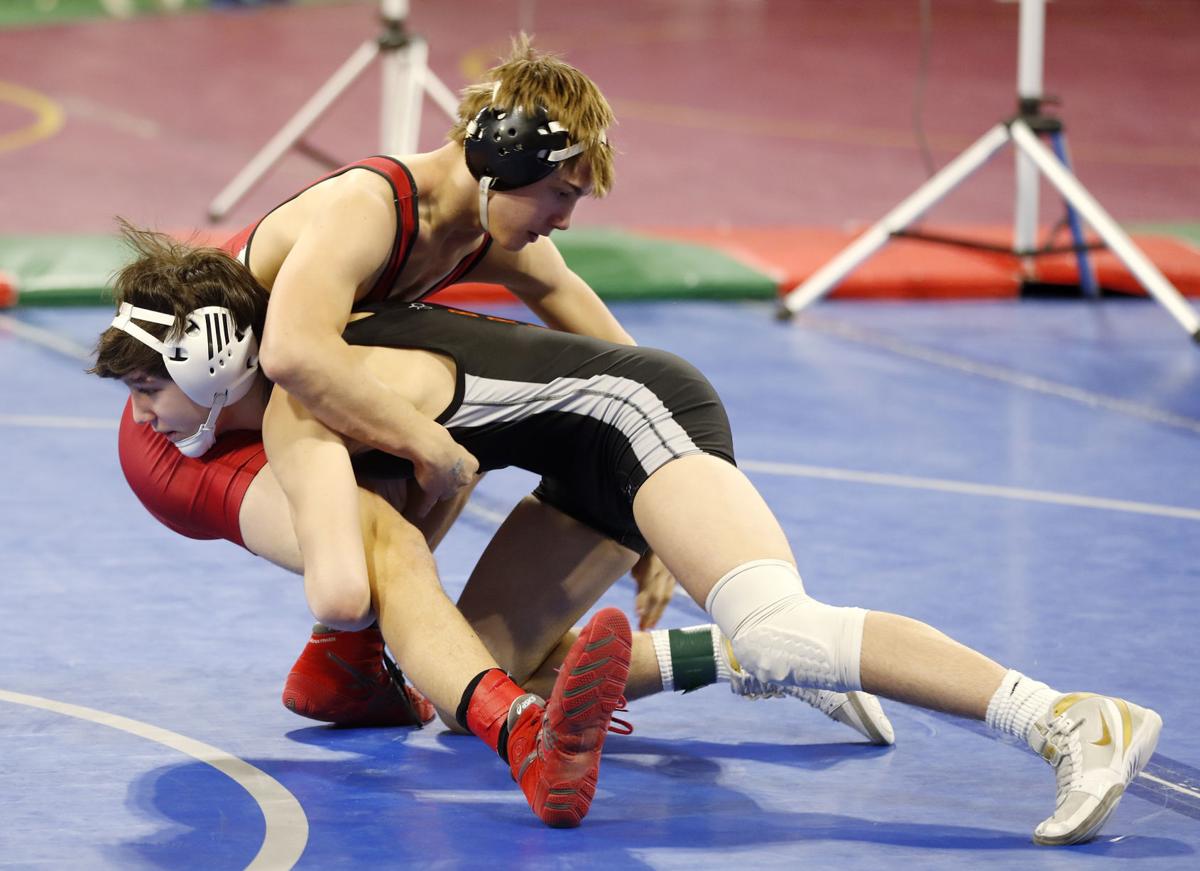 Frenchtown's Zane Schroeder pins Glendive's Jackson Almond in a Class A 132-pound match in the first round of the state wrestling tournament. 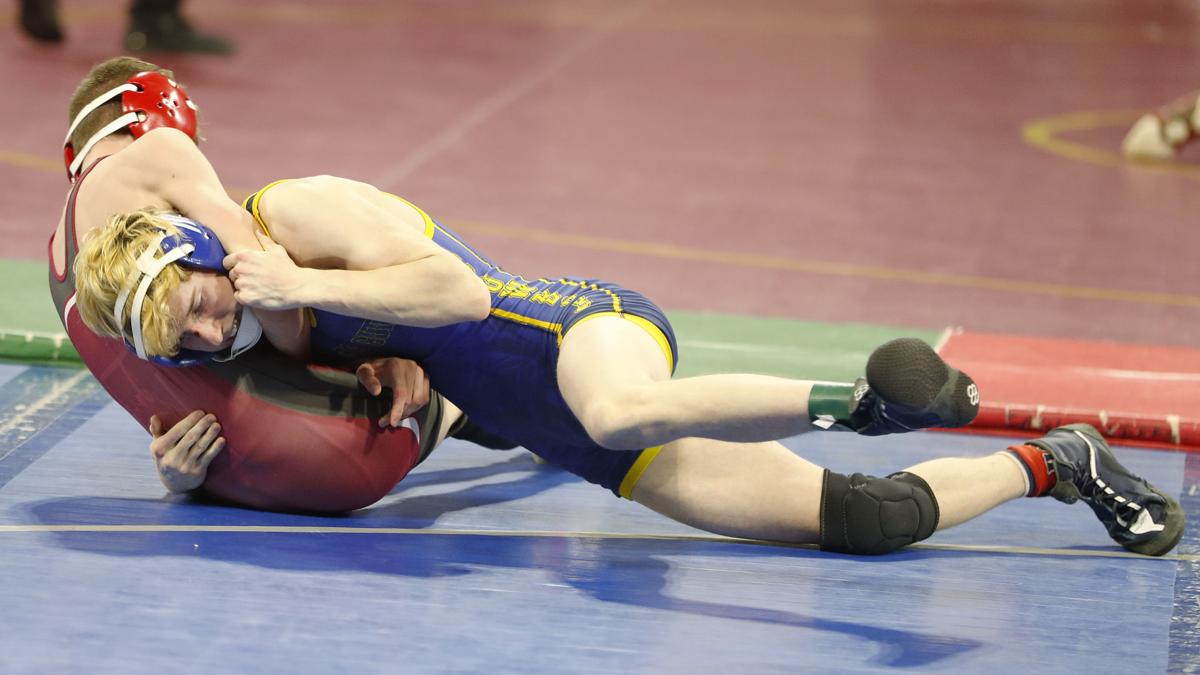 Miles City's Braxton Scheeler wrestles Hamilton's Seth Allen in a Class AA 113-pound match in the first round of the state wrestling tournament.

BILLINGS — The stakes are always high at the state wrestling tournament. So is the tension.

Frenchtown’s Jake Bibler and Lewistown’s Cooper Birdwell, potential 126-pound combatants, made short work of the competition in the Class A bracket on Friday at First Interstate Arena at MetraPark.

Meanwhile, Sidney is steamrolling toward a three-peat in the team race after placing a whopping 12 wrestlers in Saturday’s semifinal round.

“We usually come out pretty fast,” said Sidney coach Guy Melby, whose team has won 10 titles in his 34 years at the helm. “Our kids are wrestling really well. Obviously we’re pleased with that.”

The 126-pound weight division is shaping up to provide some great theater, as Bibler and Birdwell remain on a championship collision course.

What heightens the intrigue is the fact that each is a multi title-winner; Bibler, a senior, is chasing a coveted fourth state crown. Birdwell, a junior, seeks his third.

Both cruised on Friday. Bibler registered two pins in a grand total of 1 minute, 51 seconds of mat time while Birdwell won by pin quickly in the first round and by a dominant, 17-2 technical fall in the second round.

Each must win in the semis Saturday to forge a meeting in the finals, so nothing’s set in stone. But it’s there for the taking. What’s befitting of competitors like Bibler and Birdwell is that neither is ducking the other.

Birdwell, as the pressure grows, is trying to keep his mind clear.

“I’ve thought about it a lot,” said Birdwell, who faces Libby’s Xander Spady in the semifinals, “but you don’t need to think about all the drama.

Bibler will face Miles City’s Currey Brown in the semis.

Sidney piled up 147.5 points to take a commanding lead in the Class A team race. Melby didn’t think the Eagles, a perennial title contender, have ever put as many as 12 in the semifinals.

Of the 17 wrestlers Sidney qualified for this year's tourney, 16 are still alive, including returning champions Aden Graves (145), Riley Waters (182) and Jett Jones (205). Kaiden Cline, who won a title two years ago, is also in the semis at 120 pounds.

The Eagles ran off 10 first-round pins to jump to a big early lead. Entering Saturday, Miles City and Frenchtown are tied for second but well off the pace with 83.5 points each. Laurel is in fourth with 72 points while Lewistown is in fifth place with 71.5.

Hamilton’s Bridger Williams, at 160 pounds, is back in the semifinals for the fourth straight year. Williams seeks his first trip to the finals. He will face Sidney’s Dylan Lutz in his opening bout Saturday.

For Laurel, 138 pounder Keagan Campbell, 145 pounder Keagan Thompson and 182 pounder Cameron Younger are all still alive in the championship bracket as the Locomotives chase a trophy.

Including Birdwell, Lewistown has placed five in the semis.

Melby said it was “absolutely” Sidney’s goal to place all 17 of their state-tournament competitors, which is the maximum number a team can qualify in Class A. But with 16 still in the running for medals after the first day, the Eagles don’t have much to complain about.

Still, the Eagles, on the cusp of another title, won’t change their team-wide disposition.

“We’re still trying to get better and better every match we wrestle, and that’s been our mission all year.”

Saturday’s matches are scheduled to begin at 9:30 a.m. at First Interstate Arena with the semifinal and consolation quarterfinal bouts.

Zadick, 80, had served as a youth coach and tournament worker and was the father of Montana legendary wrestlers Bill and Mike Zadick.

Hardin's Sean Mehling looks up as he wrestles Whitefish's Jackson Carson in a Class A 126-pound match.

Frenchtown's Zane Schroeder pins Glendive's Jackson Almond in a Class A 132-pound match in the first round of the state wrestling tournament.

Miles City's Braxton Scheeler wrestles Hamilton's Seth Allen in a Class AA 113-pound match in the first round of the state wrestling tournament.