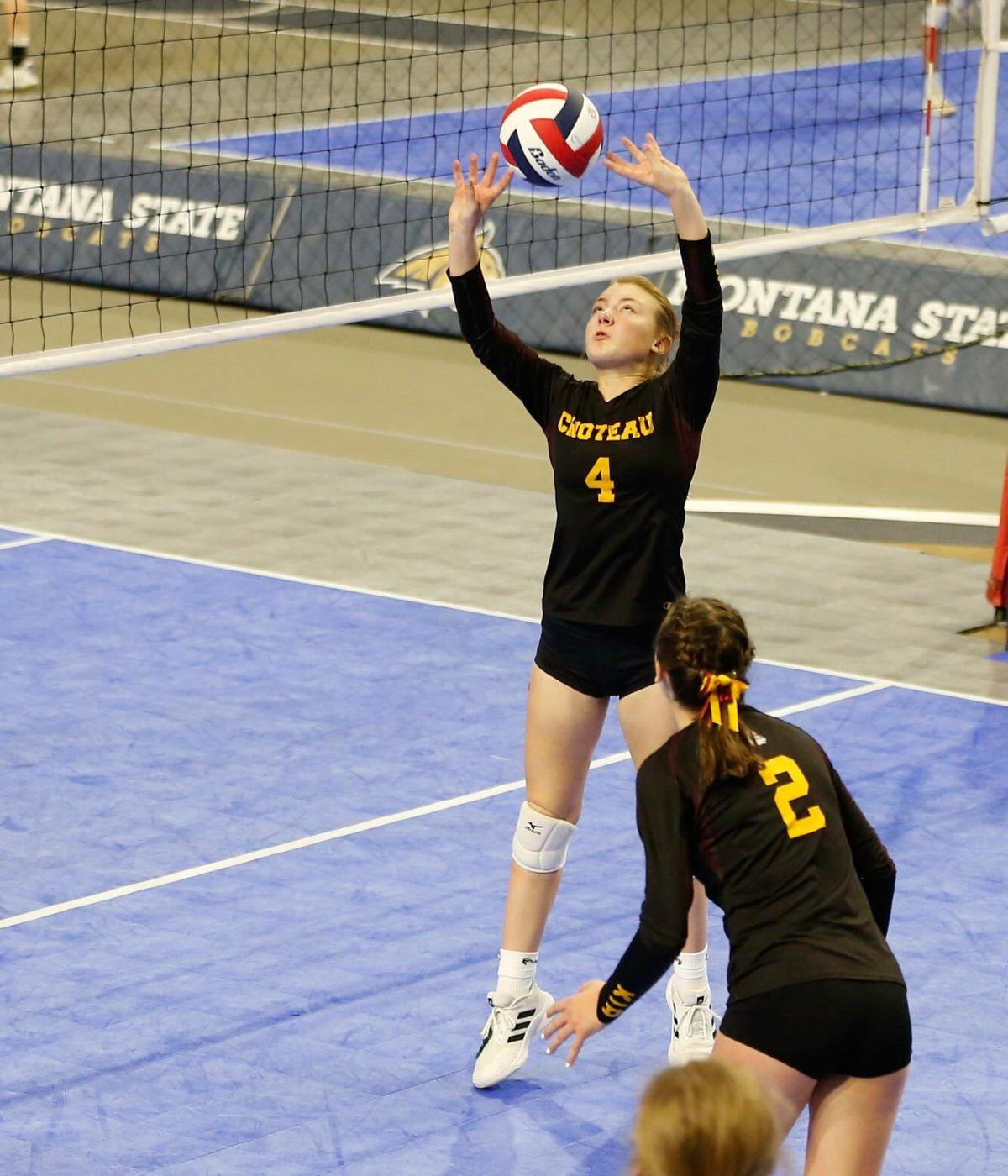 Choteau's Ella Peach sets against Jefferson during Thursday's Class B state volleyball tournament at the Brick Breeden Fieldhouse in Bozeman. 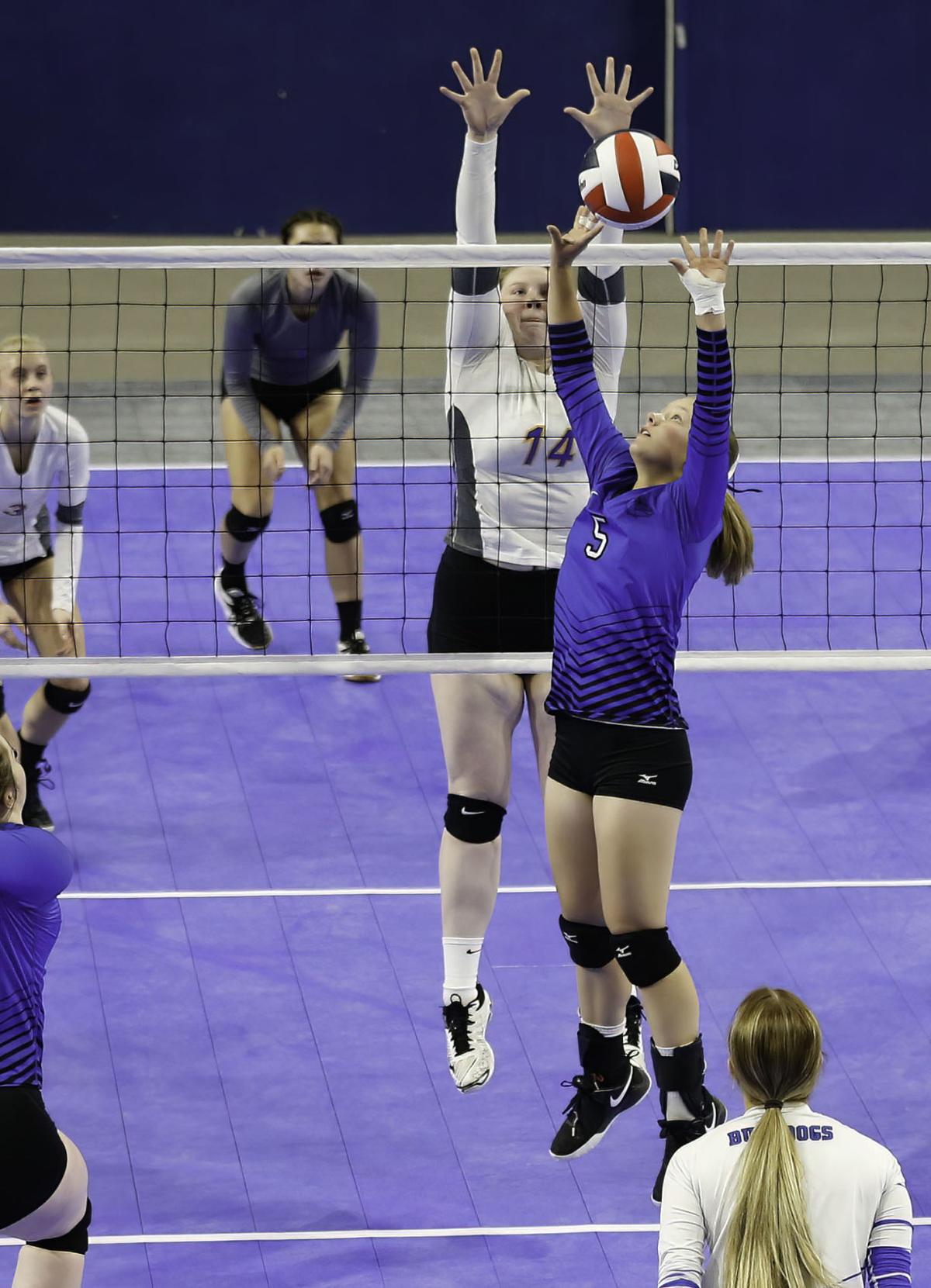 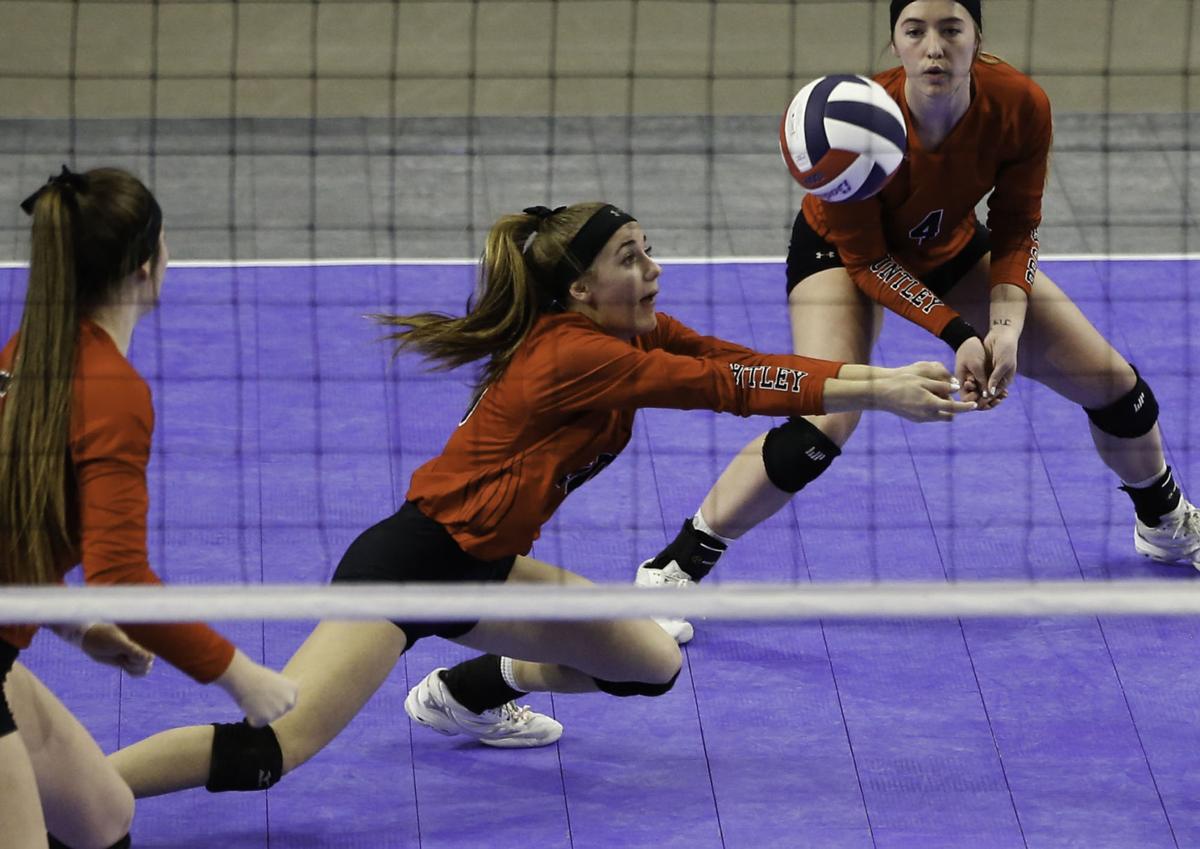 Huntley Project's Delayne Lindeen dives for a dig during Thursday's Class B state volleyball tournament at the Brick Breeden Fieldhouse against Malta. 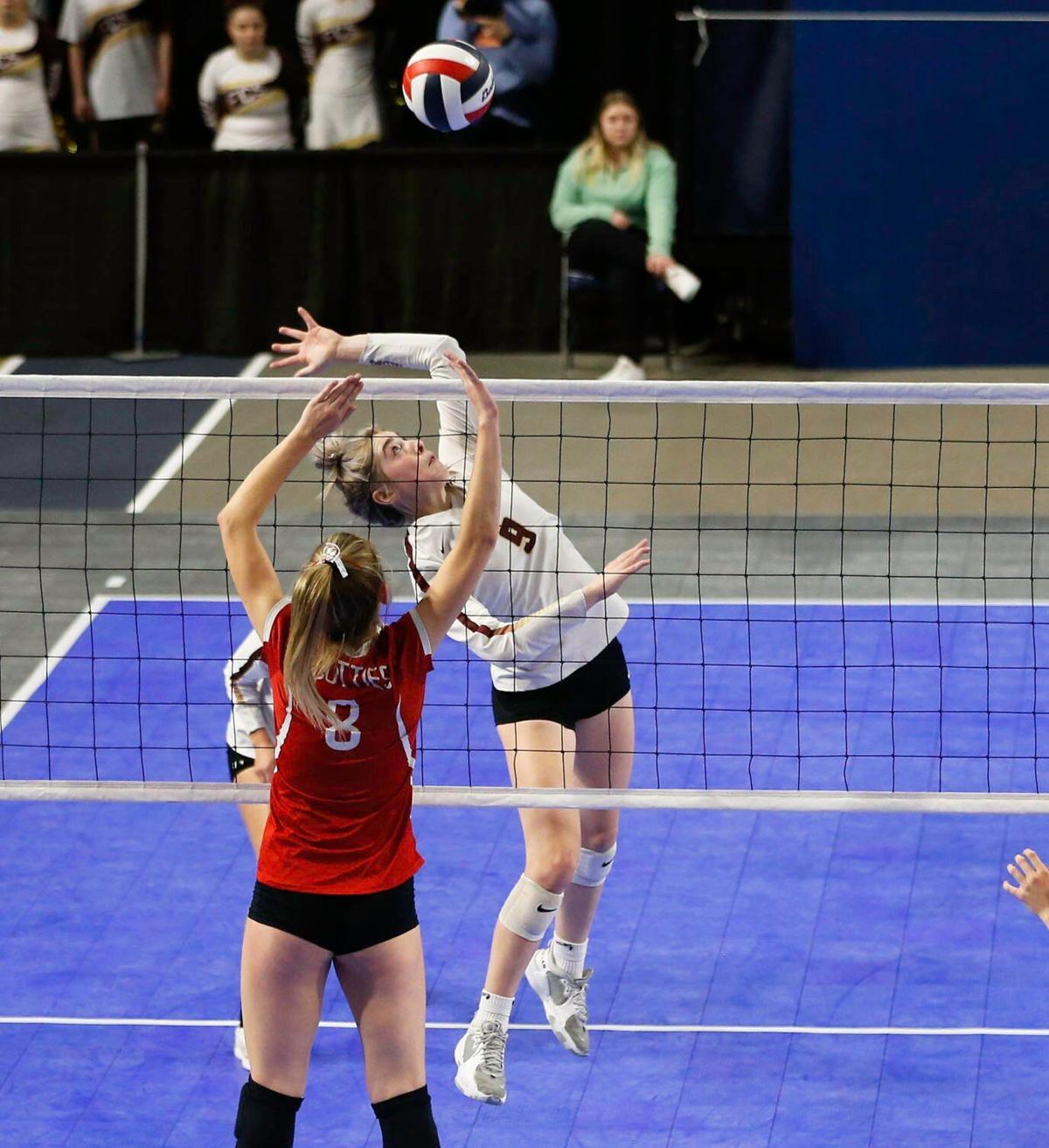 Florence's Kasidy Yeoman goes up for a kill against Glasgow during Thursday's Class B state volleyball tournament at the Brick Breeden Fieldhouse in Bozeman.

BOZEMAN — In danger of dropping the first set to Florence-Carlton, Huntley Project stood its ground.

The Red Devils didn’t get to where they are, a program that’s played for the Class B state title each of the last 12 seasons, by giving in.

So, two points from defeat, the Red Devils turned things around and beat the Falcons 25-23, 25-16, 25-17 in the final match of Thursday’s first day of the state tournament.

Win Friday night’s semifinal unbeaten match against Townsend and the Red Devils will play for the state title once more.

“This is special, it’s a different group of girls every year,” Project coach Iona Stookey said. “It’s just a lot of hard work and effort from all of us, all the way to the assistants and my managers. I just expect a lot out of them.”

Florence-Carlton led 23-21 in the first set. But the Red Devils, who stayed undefeated at 30-0, won the next four points and then went on to take the next two sets in easier fashion.

Cearra Oblander had 16 kills and Greta Peterson and Josie Hasler both added 15 for the Red Devils, who finished with 51 kills to the Falcons’ 30. Macee Murphy had 44 assists and 18 digs and Hasler finished with a match-high 27 digs.

“We just tried to bring as much energy as we could so that we could push through,” Peterson said. “We really don’t like going to more than three sets, so we just kind of push through as much as we can.”

Rylie Morton and Jaidyn Larson had seven kills each for the Falcons. Kobi Wood finished with 25 digs and Kasidy Yeoman had 20 assists.

Trinity Wilson had a hunch. When Townsend won the annual Choteau invitational volleyball tournament this year, by beating the host team no less, that’s when Wilson and the Bulldogs believed good things were in store.

The Bulldogs followed through on that promise in the second round of the state tournament, beating that same Choteau team 25-23, 25-19, 25-18 to advance to the undefeated semifinal.

Townsend has assured itself of at least third place in the tournament. Regardless of what happens over the next two days, the Bulldogs will take home their first trophy since 2008.

It all goes back to that early-season tournament win.

“It wasn’t necessarily a telltale sign,” Wilson said, “but it was a super good insight to what is to come.”

Wilson had 11 kills, 11 blocks and seven digs to lead the way for Townsend. Emily Bird had 25 assists and Alleigh Burdick finished with 19 digs.

Two years ago, when Townsend qualified for state, players and coaches went digging into the archives find out when the last time the Bulldogs hunted down a trophy. It didn’t happen two years ago, but it has now.

“The last time we played Choteau we beat them, so we kind of had the mental edge,” Townsend coach Megan Bleile said. “That’s huge for us when we have the mental toughness to know we can beat a team. We play more relaxed and do our thing.”

Glasgow made Florence-Carlton work for its first-round win and that’s OK by F-C coach Christy Duchien.

“We’ve got three freshmen on my team right now, and this is brand new for them,” Duchien said. “They need to get the feel for what this environment is like and what it takes, what that next level of play is.”

Larson, one of the Falcons’ seniors, had 17 kills and Rylie Morton, another senior, had nine. While Glasgow had 98 digs, the Falcons were credited with 115, led by Kolbi Wood’s 44. Kasidy Yeoman had six blocks and Elise Schneiter, one of those freshmen, had five.

“I keep telling the girls when everybody’s on, we could be a force,” Duchien said. “I wouldn’t say everybody was a force just yet, but we had some girls who needed to be on, (were) on tonight.”

Carly Nelson led Glasgow with 11 kills and nine blocks. Daley Aune had 21 assists and Blaire Westby had 25 digs for the Scotties.

Project, last year’s runner-up to Joliet, kept its unbeaten record intact and improved to 29-0 behind three players in double figures in kills.

Greta Peterson, Josie Hasler and Cearra Oblander all had 10 kills in a match where the Red Devils rarely, if ever, stumbled.

“I was hoping that we were ready,” Project coach Iona Stookey said, “and we jumped on them early. We just didn’t let up. We just kept our foot on the pedal and didn’t let up and kept swinging.”

The Red Devils had a typical strong defensive performance, too, putting up 64 digs and while giving up just the 29 points.

Hasler led the way with 17 digs, while Delayne Lindeen added 14 and Brynn Wandle 11.

Malta was led by Skylie Lefdahl’s four kills. Kennedy Koss had 10 digs for the M’ettes.

“You have to coach your kids to play until that last whistle, no matter what the score is,” Stookey said. “I haven’t found that answer completely, you know, keep going, keep going, that kind of stuff. I thought that was a good first round for us.”

The Townsend Bulldogs brought just one senior to the tournament. Don’t let that roster fool you, though.

“We are young, but I mean, a lot of those young girls played last year,” Bulldogs coach Megan Bleile said after her team defeated Thompson Falls 18-25, 25-13, 25-12, 25-21 in the first round. “So even though a lot of them are sophomores (five), a lot of them saw playing time last year. Then two of my juniors have been playing since they were freshmen. So, we look young, but we’re experienced.”

The Bulldogs relied on some of that experience to eventually pull away from the Blue Hawks. The fourth set was tied at 19-19 before Townsend was able to finally finish things off.

Trinity Wilson had a match-high 18 kills for Townsend, which received 26 digs from Alleigh Burdick and five aces from Luce Horne. Wilson also had 15 blocks and six blocks.

“The middle (of the match) was really good,” Bleile said. “The beginning was a little rough. I think we had a lot of jitters, but I think they worked through a lot of those.”

Choteau and Jefferson continued their season long back-and-forth at the Class B state volleyball tournament. It was Choteau that came out on top.

“We’ve split with them throughout the season,” longtime Choteau coach Ann Funk said about Jefferson, before detailing the program’s wins and losses against each other at regular-season tournaments where they’ve faced off and trade victories. “They’re just a good team.”

Funk’s Bulldogs proved the better team on this day behind a 19-kill, 35-dig effort from Emma Gunderson. Tessa Brownell led Choteau with 14 assists and Taylor Asselstine led with seven blocks.

Choteau finished with 60 kills to Jefferson’s 59.

“Ultimately, it comes down to the kids and what they are determining in themselves,” Funk said. “This group, they battle hard, they fight hard. And that’s a credit to them.”

Photos: First day of the 2021 Class A state volleyball tournament

Photos from the opening rounds of the 2021 state A volleyball tournament Nov. 11, 2021 in Bozeman.

Photos: First day of the 2021 Class B state volleyball tournament

Photos from the opening games of the 2021 Class B state volleyball tournament in Bozeman Nov. 11, 2021.

Choteau's Ella Peach sets against Jefferson during Thursday's Class B state volleyball tournament at the Brick Breeden Fieldhouse in Bozeman.

Huntley Project's Delayne Lindeen dives for a dig during Thursday's Class B state volleyball tournament at the Brick Breeden Fieldhouse against Malta.

Florence's Kasidy Yeoman goes up for a kill against Glasgow during Thursday's Class B state volleyball tournament at the Brick Breeden Fieldhouse in Bozeman.