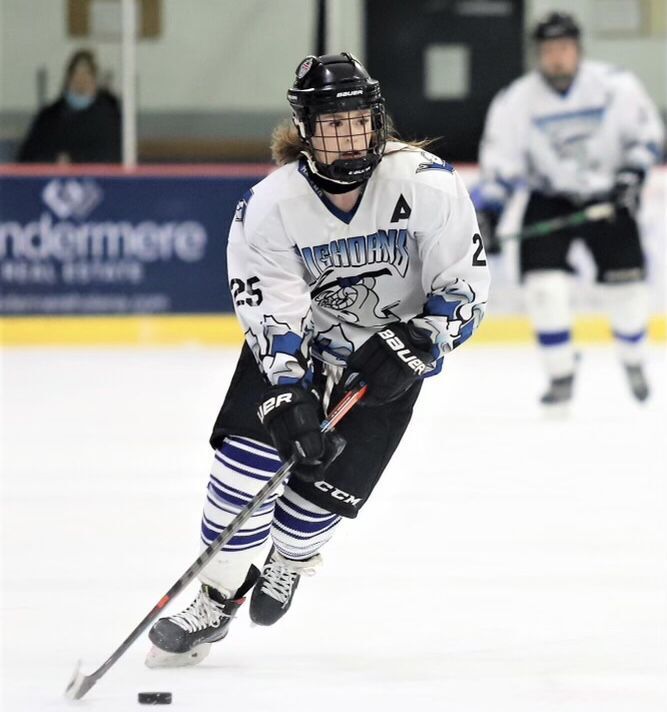 Brooklyn Pancoast skates while handling the puck for the Bighorns during a game in Helena last season. 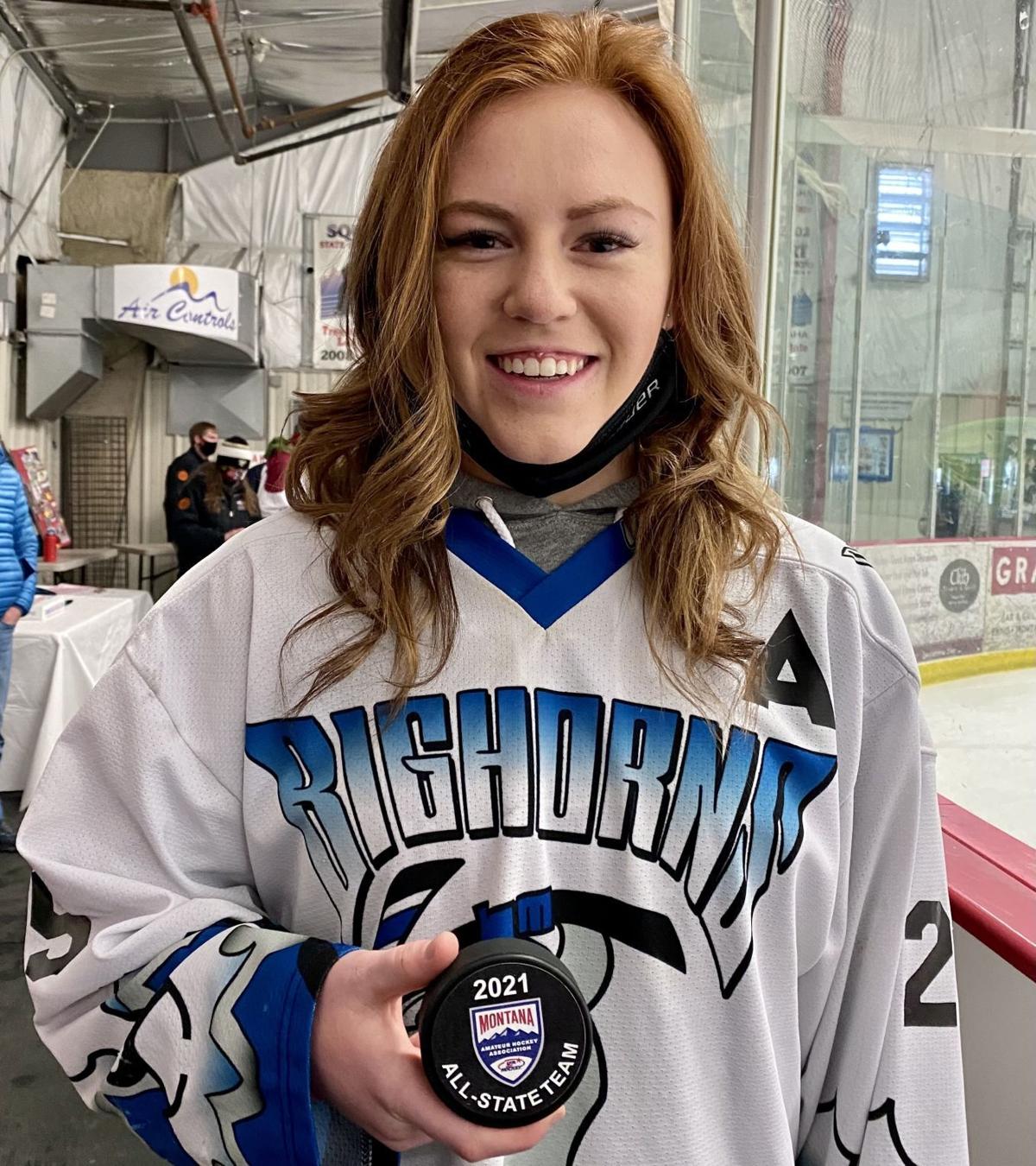 BUTTE — Many high school athletes in Montana must juggle school-affiliated athletics with academics and extracurricular activities outside of school.

She manages this all while maintaining a 3.9 GPA.

Pancoast, 17, and her family grew up in Medicine Hat, Alberta, Canada, which is five hours from Helena. She currently resides in between Montana City and Clancy.

She remembered her and her childhood friends being drawn to hockey as young as 4 years old.

“So pretty much everybody who was born in Canada is born on skates,” Pancoast said. “My family was pretty big into hockey. So we used to go watch a bunch of games and support our community teams.”

Pancoast and her family moved to Montana in August 2016. She had to play with boys growing up because girls’ youth leagues did not exist close to where she has lived.

While attending a development camp after the move, Pancoast stuck out like a sore thumb, and not in a socially awkward way that some might experience after moving to a new country. She stood out because she was so much better at hockey than everyone else in attendance.

“Actually, a former Montana hockey player, her name is Celeste Brown, she also played Division I hockey, came up to me and said, ‘You're not from here. Where are you from?’” Pancoast remembered.

Brown instructed Pancoast to find a girls travel team to play with. That would be the best way to get exposure in front of college scouts.

Pancoast’s mother, Rachelle Schneiderhan promptly went to Facebook, seeing if her social network could help her search for a team.

They were put in contact with the Milwaukee Junior Admirals, and Pancoast was able to join the squad during her sophomore year at age 15.

Playing on a travel team not only allows players to hone their skills against excellent competition, but it helps athletes compete in front of scouts. Sometimes players are noticed by scouts who were originally attending the game to watch another player.

While squaring off against Shattuck St. Mary's, a highly touted youth hockey organization, like she had done at the development camp before joining the Junior Admirals, Pancoast made it impossible for scouts to ignore the way she played.

“It felt pretty good on my end, knowing that even though I wasn't on the best team, that I can still show my talent as much as what I did against girls that compete at a high level, just like I do,” Pancoast said.

She was then asked if she wanted to play for the Detroit Belle Tire, which was a significant step up from the Junior Admirals.

After playing with Detroit for a bit, college coaches were allowed to contact Pancoast personally starting June 15, 2020. She said that she received some interest from schools in Minnesota and Boston, but Saint Anselm felt like home.

“I knew that Saint Anselm is the right fit for me as soon as I stepped on that campus,” Pancoast said. “It's beautiful. It's a small school, and the coach really supports academics and is willing to work with me with going into nursing. It just reminds me a lot of JHS.”

Pancoast finished her first season with Detroit with 64 points in 31 games. The team plays roughly two tournaments per month during their season which spans from September to March.

“My speed has definitely always come natural to me,” she said. “I just have quick feet and I've always had quick feet. I also have a very high hockey IQ. I can read plays before they happen, and I feel like that helps my game out a lot, knowing where the puck is going to be and how I can get the puck away from somebody. My speed also helps with that because I'm also a couple sticks or strides ahead of everyone else.”

When she’s not skating with Belle Tire, Pancoast is still playing with the boys as part of the Helena Bighorns.

In 15 games with the Bighorns, Pancoast racked up 38 points. She said that while her girls’ team could give the boys a run for their money, the main difference in play between the two teams is the physicality.

“Every game I pray to the hockey god that he watches over our girl,” Schneiderhan added. “The boys treat her like another boy out there in every aspect. She wouldn’t want it any other way. She’s a girl in a boys league. She is a threat, and if they need to check her they will.”

As the astounding number of points Pancoast accumulates might indicate, she enjoys being a playmaker. Sometimes she plays center, other times wing depending on the matchup.

“I like to give my teammates the opportunity to put the puck in the back of the net or to be able to make them better as players,” Pancoast said. “I just like to be able to do my thing out there, but also help other girls. I also like to use my speed as an advantage. So if somebody sees me going hard to the net, they know to follow up.”

Whether she’s on or off the ice, helping others seems to be a part of who Pancoast is. When her playing career is finished, she wants to become a nurse. And if there’s any time leftover, she wants to help develop a more robust girls hockey program in the Helena area.

“I'm hoping to come back to Montana in Helena and find a job at the hospital and help with the girls hockey here, get it going more, like become a mentor or a coach,” she said. “I don't even think we have a team here. I think most of the girls just play with the boys because there's not enough girls to make a girls team.

The Montana Amateur Hockey Association does have 19U teams in Missoula, Glasgow, Havre, Bozeman and Flathead, but no representation in Helena.

Did I mention she’s doing all this in addition to playing middle blocker for Jefferson volleyball?

They’re trying to break through in the competitive Class B volleyball world typically ruled by Huntley Project and Joliet.

In order to dethrone the giants, it’ll likely take a well-coached team with experience and desire to do what it takes to get over the hump.

The Panthers believe they have that.

“We are looking very strong,” Pancoast said. “I feel like we have a bond like no other. We have all played together at some point. With there being 10 seniors on the team, we have practiced a lot together.”

Many of the Panthers have played on travel teams together, knew each other before high school or both.

“Ever since we were freshmen we always talked about winning a state title so that’s what we’re striving for this year,” said senior Dakota Edmisten.

“Outside of volleyball, we hang out,” Pancoast added. “So we also have that bond outside of the court and school. So it's nice to be able to have all of us on the same team, and we all have the same goal at the end of the season: to go to state.”

Brooklyn Pancoast skates while handling the puck for the Bighorns during a game in Helena last season.