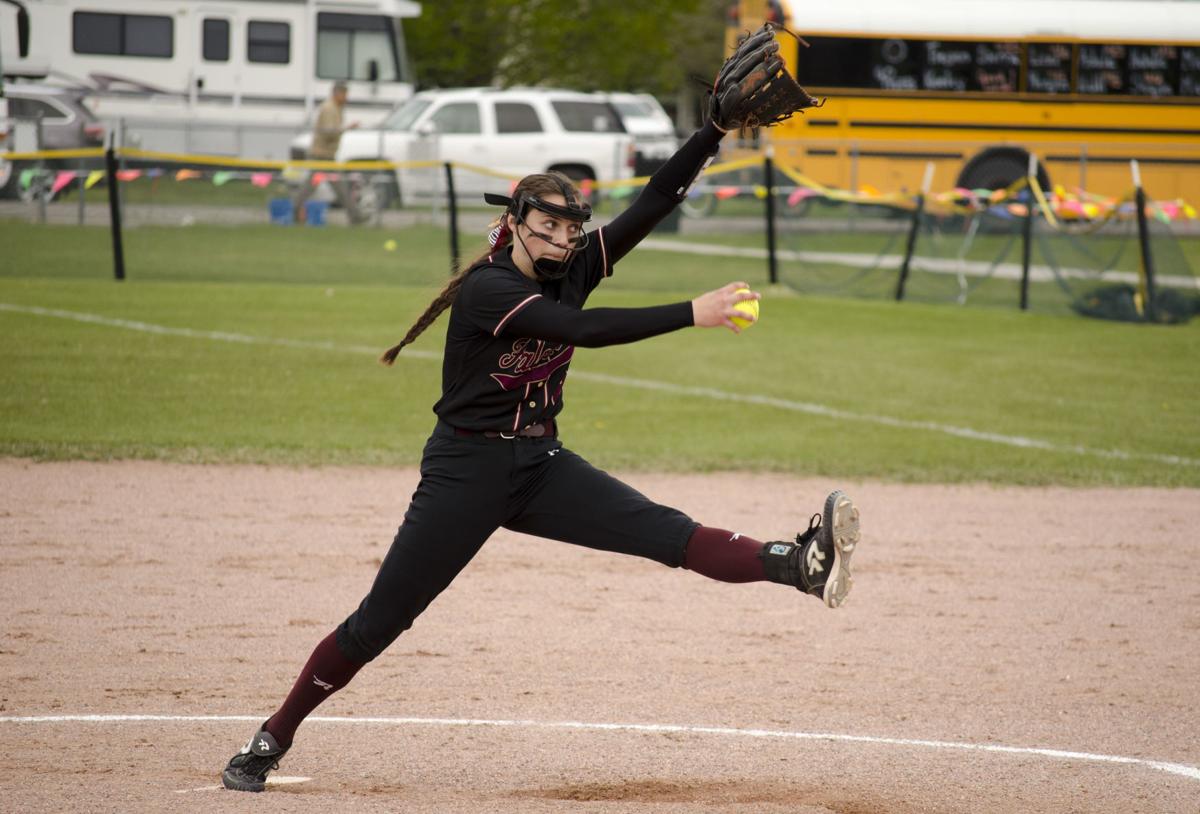 Florence's Shannon Byrne throws at the state softball ltournament May 23, 2019 in Belgrade. 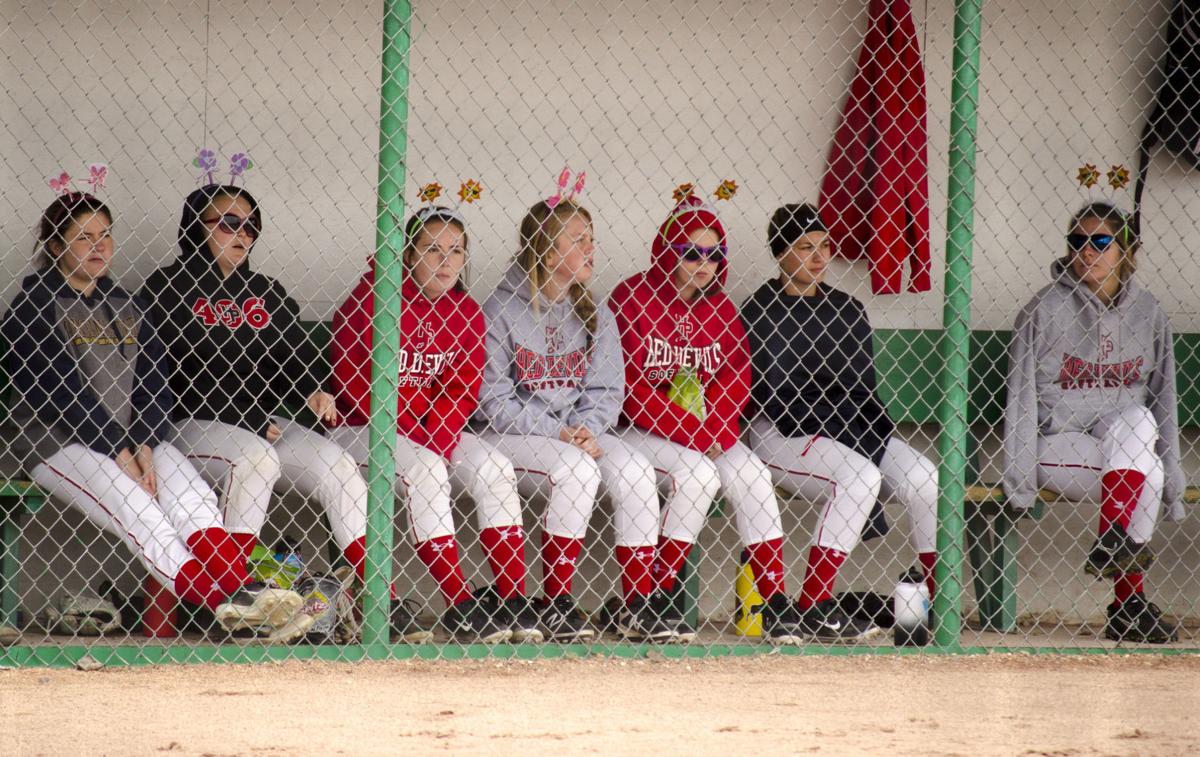 Members of Huntley Project watch the action from the dugout during their first-round game against Manhatttan at the State B-C softball tournament in Belgrade. 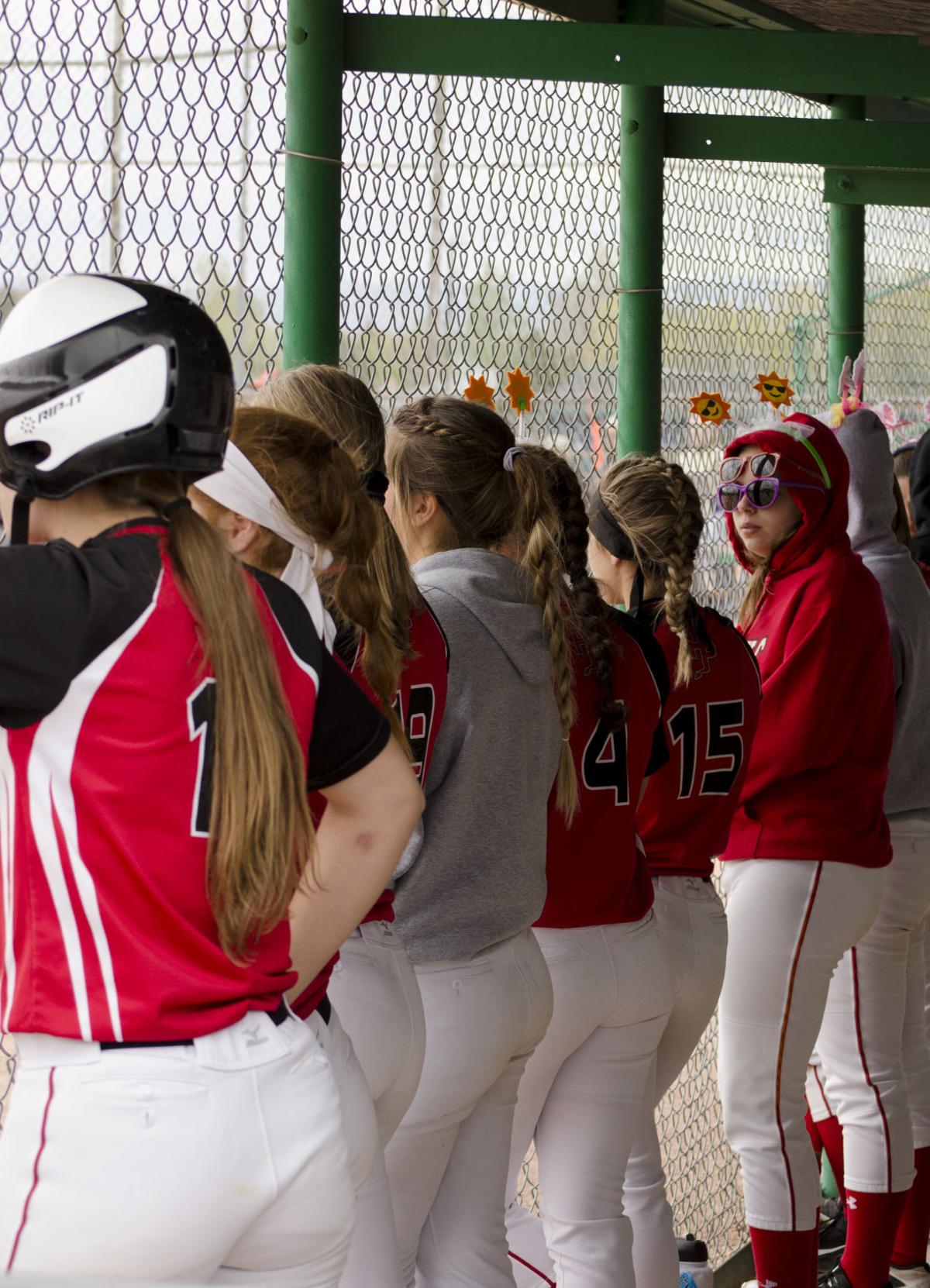 Huntley Project players sport sunglasses and summery headwear during their game against Manhattan May 23, 2019 at the state B-C softball tournament in Belgrade. 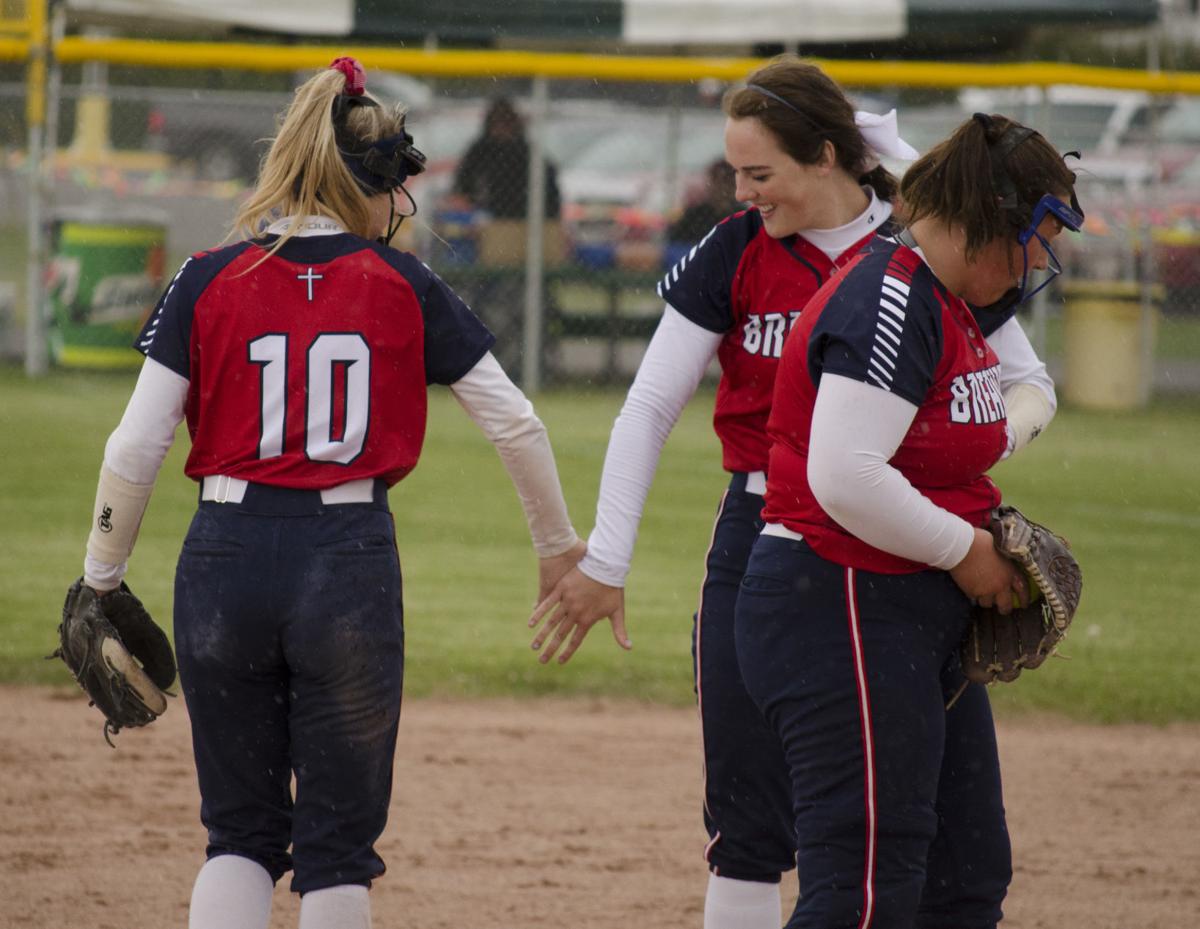 Emily Hermes and McKenna Bessette exchange a handshake after a huddle as Kayla Hickethier prepares to pitch during their game against Shepherd May 23, 2019 during the state B-C softball tournament in Belgrade. 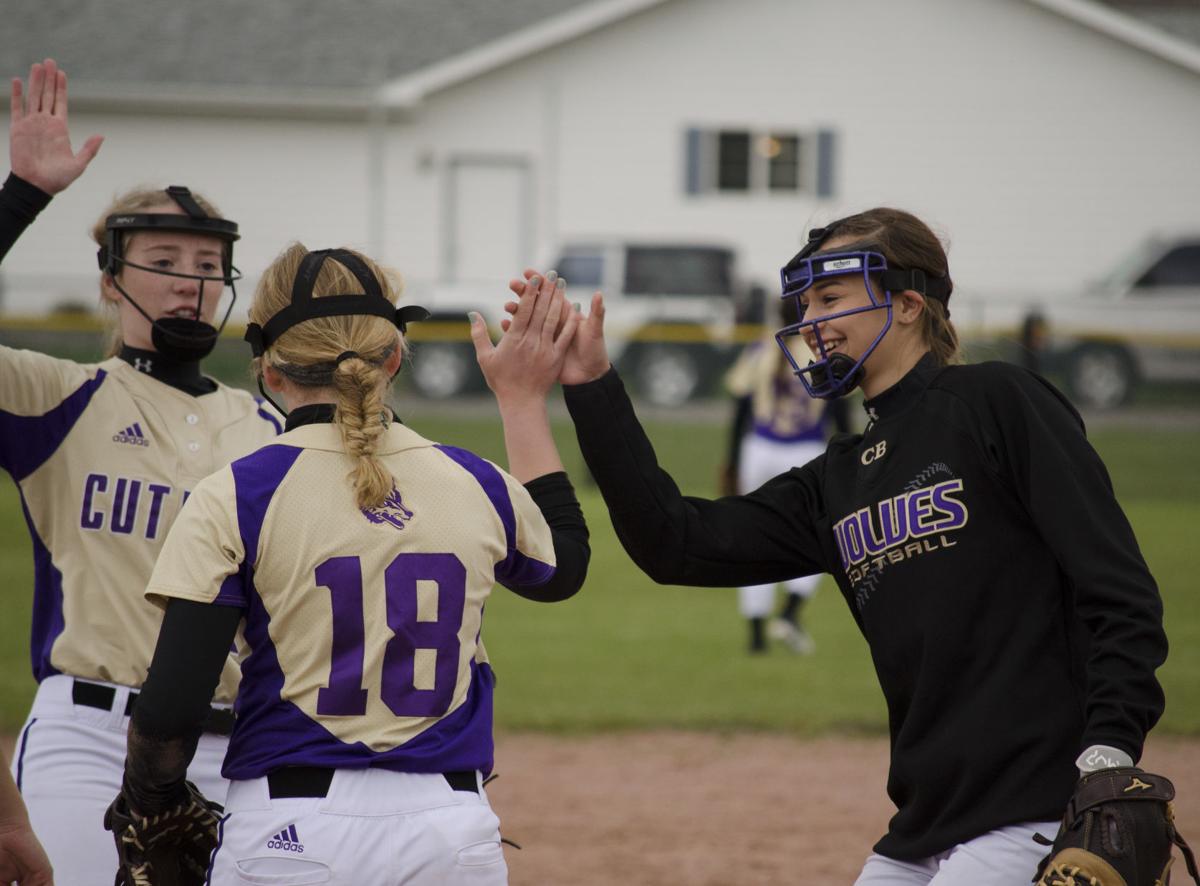 Infielders congratulate Macy Rose after she dove to catch a foul ball along the third base line during the first round of the 2019 state B-C softball tournament May 23, 2019 in Belgrade.

BELGRADE – The Huntley Project Red Devils were sporting sunglasses and festive summer headwear in the dugouts – wishful thinking on a cool day where sprinkles fell periodically as clouds gathered and sunk lower into the Gallatin Valley – during their first round of the 2019 state softball tournament.

The Red Devils were the lone team from the Eastern division to advance to the undefeated second round after both divisions were forced to change their divisional tournaments last weekend. The West played an abridged version and the East was cancelled after one batter due to rain.

It took a little while for pitcher Addy Hultgren to settle in, but she went the distance for the Red Devils with 11 strikeouts.

Kasey Jones hit a home run in the bottom of the fifth to give Huntley Project a two-run advantage which Manhattan promptly erased with Amy Grevious’ own homerun at the top of the inning and then the Tigers worked their way around the bases.

“We know what we can do, it’s just a matter of putting it all together at the right times,” Huntley Project coach Tim Bastian said.

The Red Devils will focus on doing that in a second-round matchup with two-time defending champions Florence-Carlton.

Natalie Scott and Malia Friese each contributed an additional RBI to the Tigers who were making their first trip to state in just the second year of having a program.

“From last year to this year unbelievably different compared to pitching, the defense, all of the above,” Bastian said. “That’s awesome to see for other programs that they’re continuing to get better – it pushes everybody to get better.”

“You can do more every game and they did,” Cygan said. “They have and at the end of the year, they’re starting to believe in themselves.”

Manhattan will face Conrad-Choteau in the next round.

The Falcons jumped out to a hot start early scoring seven runs in the first inning against Conrad-Choteau in their first round game on their quest to defend their state title.

“I’ve always said the first game at state is usually the hardest one to win,” Florence-Carlton coach Rob Ralls said. “Both teams have jitters and just get it out of the way.”

They came into the tournament as the second seed after dropping the divisional championship to Missoula Loyola last weekend, but it didn’t seem to faze the Falcons.

Kasidy Yeoman was 3-for-4 in the leadoff spot with two doubles. Kylie Kovatch had two RBIs to lead Mackenzie Little, Kolbi Wood and Natalie Dulac with one each.

And pitcher Shannon Byrne, who suffered a high ankle sprain five weeks ago, returned to action.

“She came in with bases loaded and one out and got us out of a jam and then pitched three to four quality innings and had some good at bats,” Ralls said. “The whole team as a team stepped up and we did some good things there.”

Florence-Carlton will face Huntley Project in the second round. The two teams have met once this season with slightly different lineups. The Red Devils won.

Conrad-Choteau struggled to get anything on the board in the late innings and the Falcons continued to find success.

“We expected a lot of small ball and them to bunt the ball quite a bit and they did and we just didn’t take care of it,” Conrad-Choteau coach Tyson Anderson said. “We’re not used to seeing that so we just didn’t handle it very well.”

Mary Beth Morse was a bright spot going 3-for-3 with two doubles.

They will face Manhattan in the next round.

“We’re just hoping to play three straight tomorrow and make it to Saturday is our mission right now,” Anderson said. “So we’ll see what we can do.

The Breakers rolled to a short win over Shepherd and capped it off with a six-run fifth inning to end it early due to the 10-run rule.

Kayla Hickethier went 3-for-4 at the plate with four RBIs as well as two innings in the circle.

“She came in and did a great job and she got the finishing touch on the offense too,” Breakers coach Brian Bessette said.

McKenna Bessette was solid after pitching three innings and going 4-for-4 with six RBIs and a home run of her own. Emily Hermes also joined them with her own homer.

“We were hitting the ball really well last weekend. It took us awhile to get the bats going this game and then once they did, it snowballed.” Bessette said. “One of our strengths the last couple of weeks is that everyone in the lineup has been producing and that happened again today.

They will face Plains-Hot Springs in the second round.

Shepherd’s Lexy Dietz hit a home run in the fourth inning. Then Kylee Coates earned an RBI off a double to cap off Shepherd’s most successful inning.

The Fillies were rained out at their divisional last weekend so on top of not playing for two weeks, their field flooded this past week and they were forced to practice inside for all but one day leading up to the state tournament.

“We just came to hopefully have an upset being the four seed coming in, but hopefully better luck tomorrow,” Shepherd coach Lori Goodell said.

They will face Cut Bank in the next round.

The Trotters were out to a 2-0 lead after two innings and had increased that to 5-0 over Cut Bank by the fifth.

“We just came in relaxed. Getting jumped on with our hitting early was really good to see that,” Plains-Hot Springs coach Michele Bangen said. “Our defense was really strong and Kass(idy Kinzie) came up and threw a really good game.

“The one that stepped up huge for us on our hitting was Kelsey Standeford. She had a huge triple for us and then Sage Jackson on defense. She had a double play at short; she played awesome.”

They will face Missoula Loyola in the next round. The two have met three times this season with the Trotters earning two of the three wins, but the Breakers won the divisional meeting.

“We can get them, we just have to go for it,” Bangen said.

The Wolves struggled to find offense and like almost all the rest of their Eastern division counterparts had a tough time getting going after their canceled divisional last weekend.

“We had crappy weather up at Cut Bank so we weren’t getting much practice in outside and stuff like that. It’s just what happens,” Cut Bank coach Mike Pyette said.

“We kind of put them out last year at the state tournament so we had the big X on our back and we just didn’t pull it out. They were ready and we weren’t quite there.”

They will face Shepherd in the next round.

Email Lindsay Rossmiller at lindsay.rossmiller@406mtsports.com or find her on Twitter @LindsayRossmill.

Florence's Shannon Byrne throws at the state softball ltournament May 23, 2019 in Belgrade.

Members of Huntley Project watch the action from the dugout during their first-round game against Manhatttan at the State B-C softball tournament in Belgrade.

Huntley Project players sport sunglasses and summery headwear during their game against Manhattan May 23, 2019 at the state B-C softball tournament in Belgrade.

Emily Hermes and McKenna Bessette exchange a handshake after a huddle as Kayla Hickethier prepares to pitch during their game against Shepherd May 23, 2019 during the state B-C softball tournament in Belgrade.

Infielders congratulate Macy Rose after she dove to catch a foul ball along the third base line during the first round of the 2019 state B-C softball tournament May 23, 2019 in Belgrade.