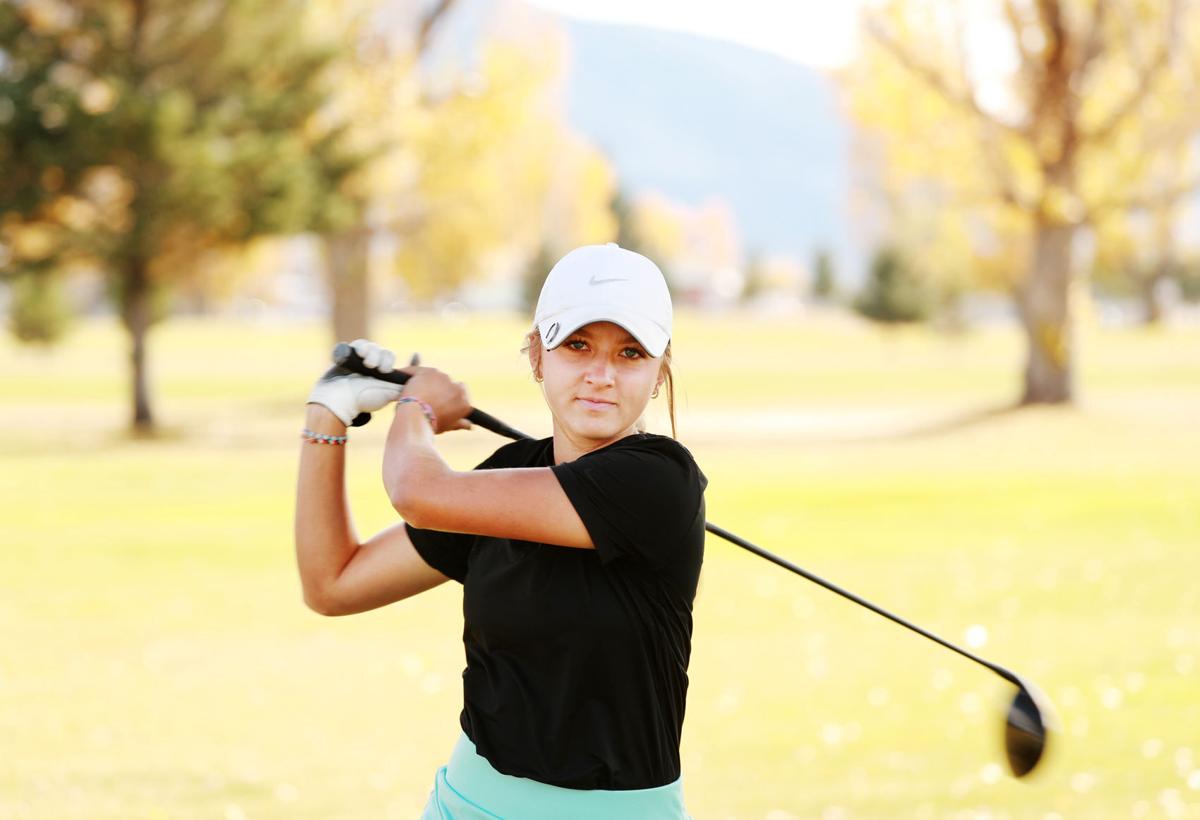 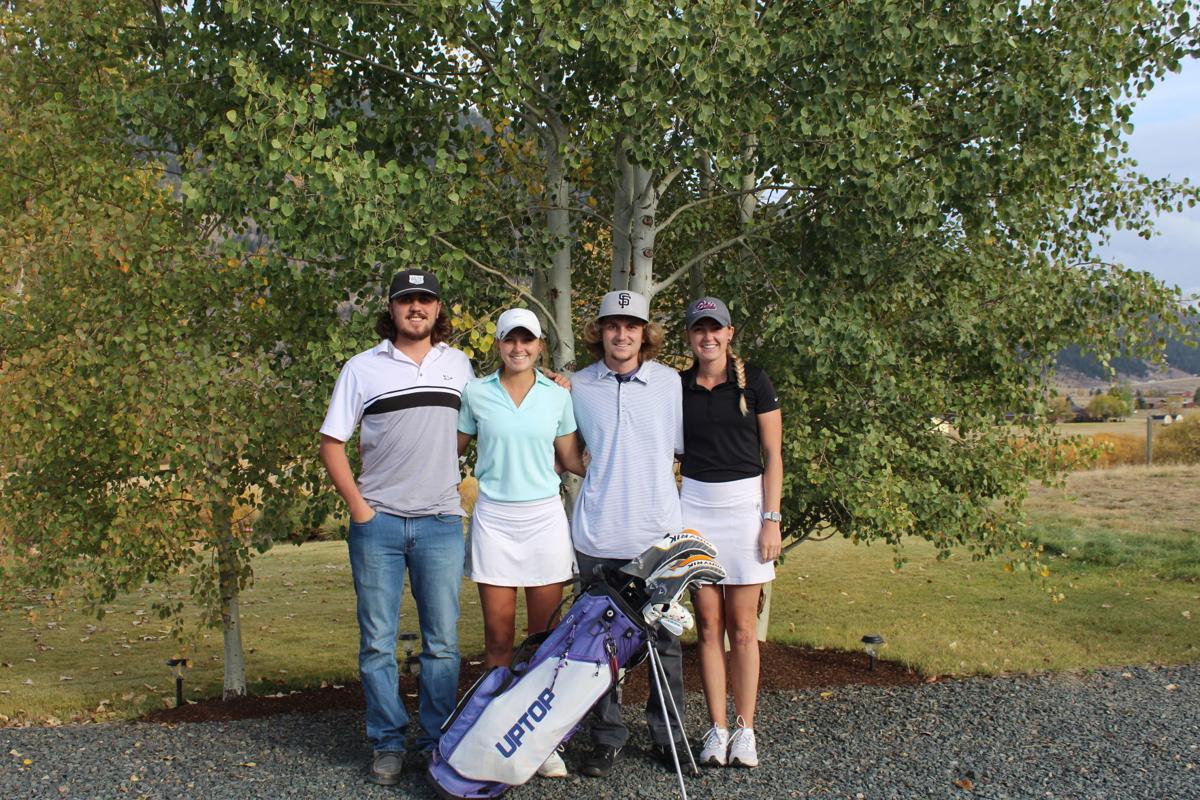 From left, Trey, Kodie, Will, and Hailey Hoagland pose for a photo Thursday in Butte. 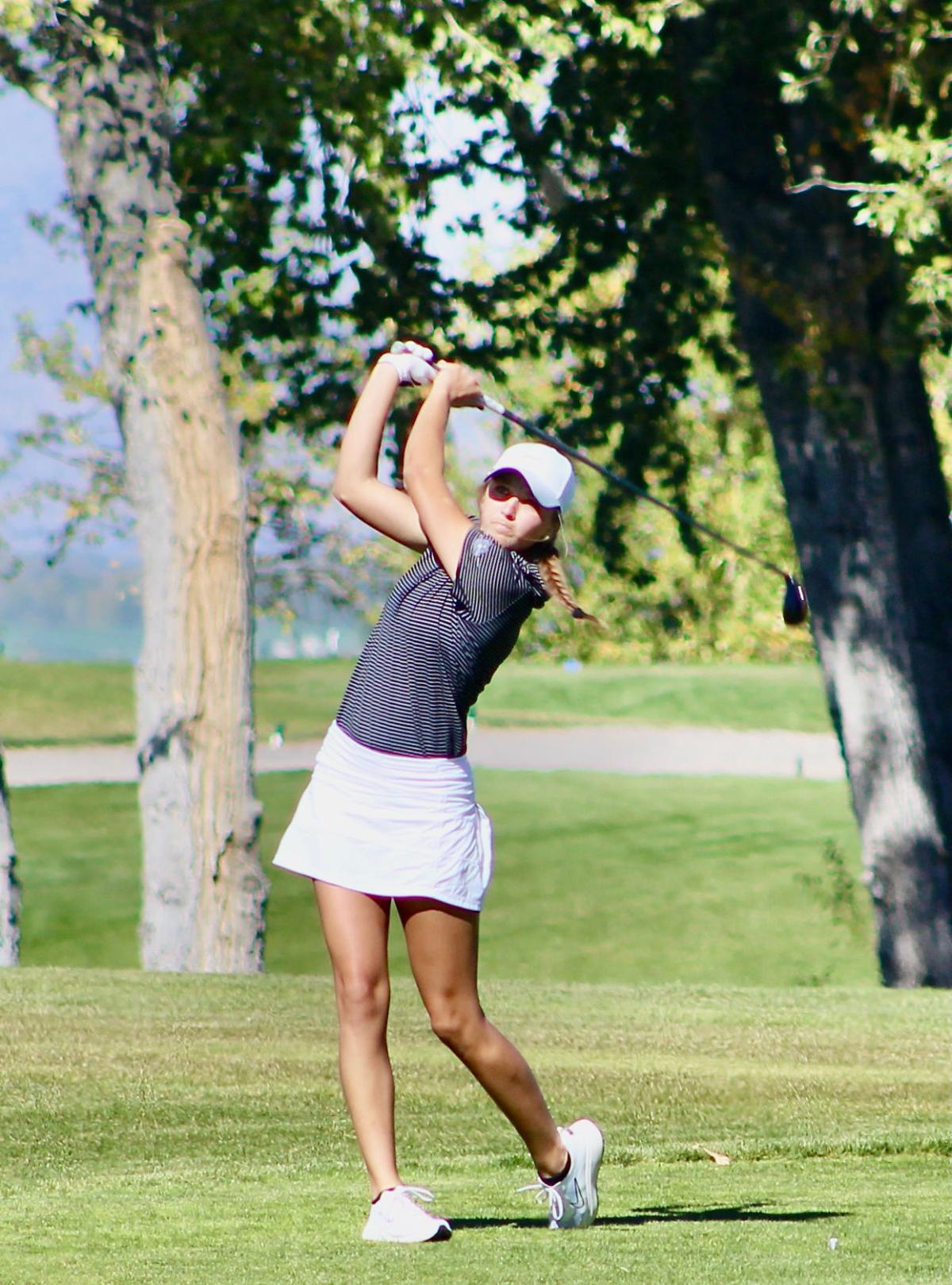 BUTTE — For the last 12 years, at least one member of the Hoagland family has been on the Butte golf team. While MHSA rules made it difficult for Hal Hoagland to watch his children compete, he saw his youngest daughter, Kodie, lead her team to the state tournament last week.

Kodie Hoagland, a graduating senior, finished in second place at the state tournament to conclude the 12-year streak. She began the 2021 season as Butte's only female participant, but finished the season alongside a team of good friends.

"The tournament was awesome, the weather could not have been more perfect," Kodie Hoagland said. "I just wanted to make the most of it because it's my senior season. It was a lot of fun."

As a multi-sport athlete, Kodie is still deciding what she wants to do after high school. But she said the presence of golf in both her family and day-to-day life has created lifelong memories.

Kodie began playing golf with her family when she was 7 years old. She was not able to watch much of her siblings' high school careers but remembers watching her sister, Hailey, play for the Griz.

"I didn't watch much of high school because it wasn't allowed, but I watched my sister play in college, my brother Trey as well," Kodie said. "I never really got to watch Will, but seeing their hard work and where it took them, I think it rubbed off on me and inspired me to do the same."

Hailey Hoagland, the oldest to go through the Butte golf program, played four years with the Bulldogs before graduating in 2014. She went on to play for the Griz where she received Academic All-Big Sky Conference honors in four consecutive seasons.

She started her Butte High career as a freshman on the varsity team. Her father, Hal, said she contributed in her first year but things "really blossomed from there."

"Hailey's first year was the fall of 2010. She contributed pretty well," Hal said. "Then Trey, he graduated in 2016. Will graduated in 2018. And now Kodie, who's a little younger, will graduate this year. It was coach Mankins that said we've had a kid in the program for 12 years and that's just really neat."

Hailey's senior team brought back two second-place trophies to Butte High School. Two other golfers on the 2014 team went on to play college golf as well.

Golf has taught the Hoagland family valuable lessons that were not always related to their performance on the course. Hailey was the first to have these experiences, but her younger siblings would soon enjoy them as well.

"It's such a great game even as you get older. You get to meet so many people," Hal said. "Hailey's first job out of college came from a connection she made through golf."

Trey Hoagland, the 2016 Butte High graduate, also had an impressive run in collegiate golf at Montana Tech. He helped the Orediggers win their first Frontier Conference Tournament in more than ten years at the 2020 University of Providence Invitational.

Hailey, Trey, Will and Kodie have earned a combined 11 all-state awards. But Kodie, the youngest, was the only to earn an all-state in every year of her high school career.

"Kodie has come in to say 'I can do this too'," Hal said. "Kodie played basketball last year for Butte High and played softball last spring. She was second-team all-state at the shortstop position. She loves all sports."

"In fact, today she just left for basketball and I asked her, 'Kodie do you not want to take a break,'" Hal continued. "But hey, that's how our house has been for a while now."

Unlike his four children, Hal did not play competitive golf. As a high school basketball and baseball player though, Hal always enjoyed playing golf with his friends and soon shared the interest with his family.

Hal introduced his children to golf at a young age and enjoyed taking them to the Butte Country Club. He said the country club's programs were very friendly towards younger golfers, and each of his children maintained an interest in the game.

"Once kids get older, when they get to be teenagers, they like to separate and do their own thing," Hal said. "But with golf, we were fortunate. On any given day I could have any of my kids out there for four hours. I think I spent more time with my kids on the golf course that I could have with any other sport.

"I wouldn't trade it for anything, as far as the time with them goes."

While golf has been a fun, family-building experience for the Hoaglands, it became a challenge on its own as the competition level increased. Hailey , for example, had to commit ample time each day during her career with the Griz.

But the time, effort and work required to be successful at the sport helped the Hoaglands understand determination, time-management and other life skills.

"They learned time management. They learned that everything had to be structured. And Hailey for example, I think that helped her graduate in four years," Hal said. "I think that's what golf does, it's really hard to be good at it unless you practice."

Hal credited his children's success to their hard work but also to the Butte High program. Former coach and current chief executive J.P. Gallagher and current coach Eric Mankins have created one of the best programs the city could ask for.

Supporting his children's athletic goals has been a joy for Hal and his wife Missy for a long time, but it has not always been easy. Until 2017, it was against MHSA rules for spectators to attend high school golf events. So the Hoagland parents had to find another way to be supportive.

"Up until four years ago you couldn't watch your kids on the course," Hal said. "So you had to walk around with binoculars, sometimes on a side street to see them play a few holes. It was ridiculous. Luckily we were able to walk with Kodie on the course."

Hal also said it will be odd not to have a high school golfer in the family. He said that if it becomes possible, he hopes to continue his involvement with the Butte High program and with golf in general.

For now, Kodie is preparing for her high school basketball season with an undecided, yet promising collegiate athletic career on the horizon. But it does appear certain that no matter what she chooses to do, Hal, Missy and the rest of her family will be by her side along the way.

"It was neat to have that many years go by that we had someone representing our family up there," Hal said. "It was sad the day she (Kodie) was done, but she played so well her last round. It was a joy to watch that.

"People have asked me, you know, what will I do once Kodie is done. "Missy and I have always enjoyed following the kids around. And when it comes to that well, it's not over."

BUTTE — Jack Prigge, a standout golfer at Butte High School, was formally invited to the 2022 National High School Golf Invitational after his stellar performance at the state tournament last week.

Check out the results through the first day of competition in Bozeman.

Two state golf champions are the honorees for September.

Butte started the year with one female golfer, now Bulldogs will compete for a state title

Kodie Hoagland was the only female golfer on the Butte High School team to begin the season. Now a team of four, the Bulldogs will compete for a state title on Thursday

Results from the 2021 Class A golf tournaments in Polson.

Gallatin's Jordan Verge edged his twin brother, while Bella Johnson and West came up a little short of state records.

From left, Trey, Kodie, Will, and Hailey Hoagland pose for a photo Thursday in Butte.