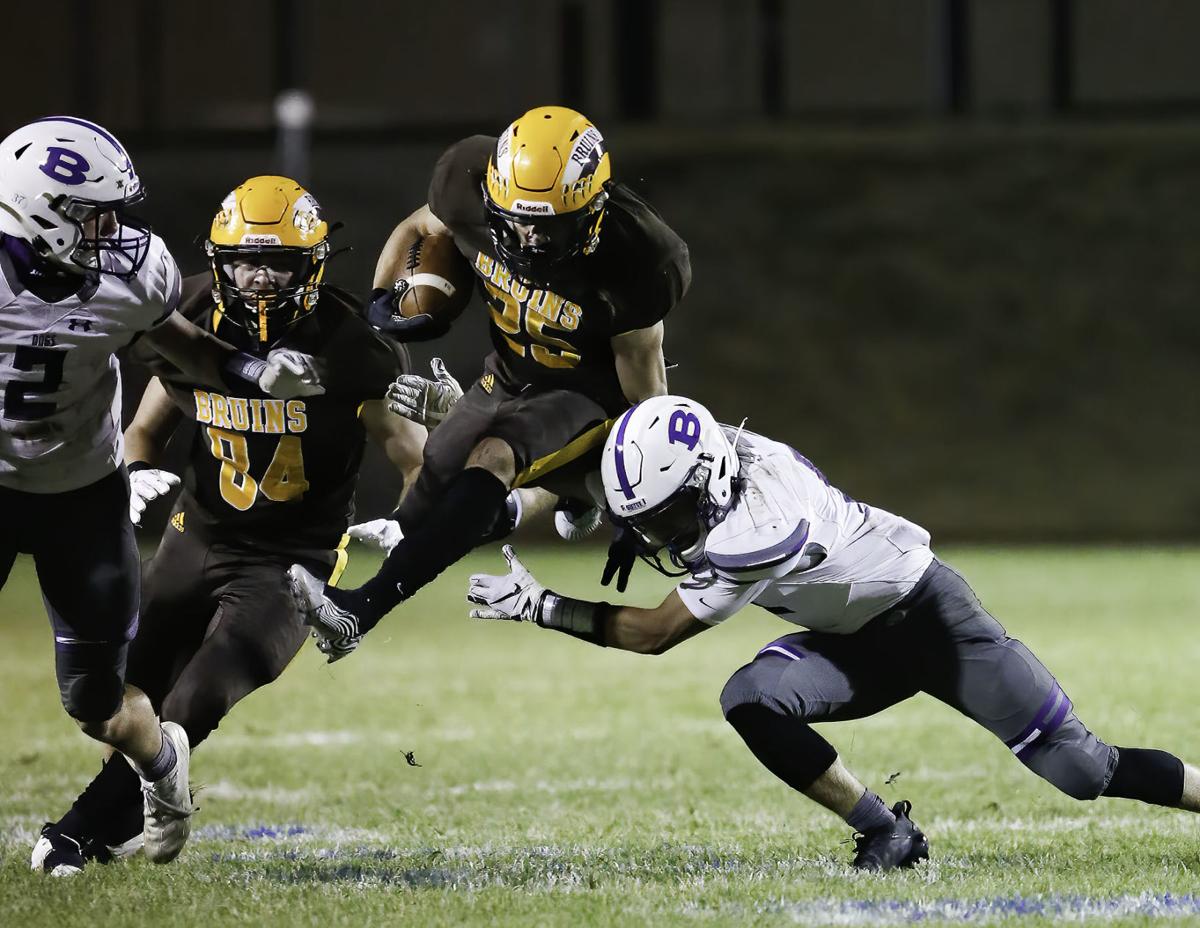 Capital running back Carson DesRosier tries to hurdle a Butte defender while running with the ball during the Bruins 20-13 loss Friday night in Helena. 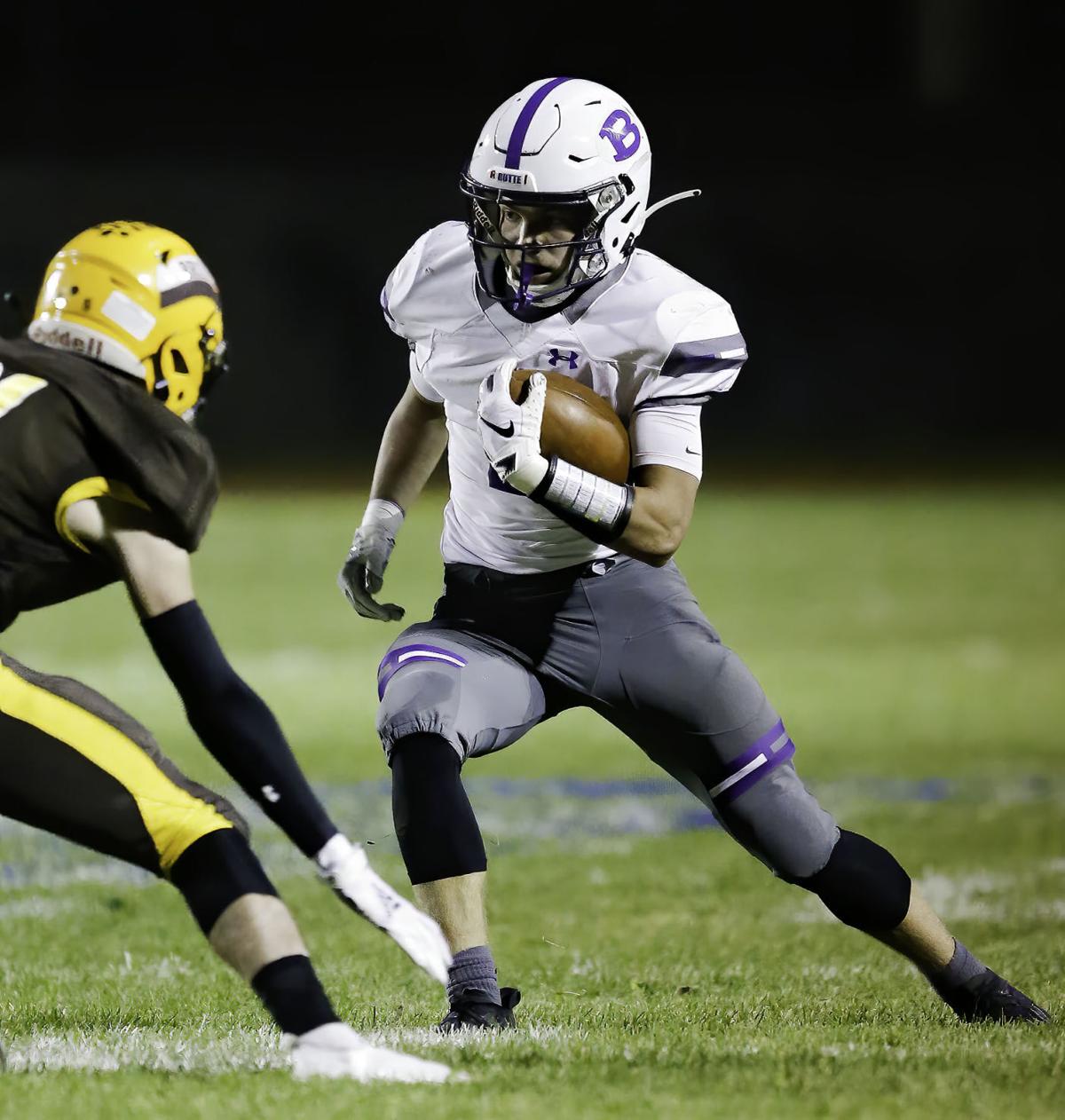 Butte High's Ryan Neil runs the ball against Helena Capital during a 20-13 win for the Bulldogs on Friday night. 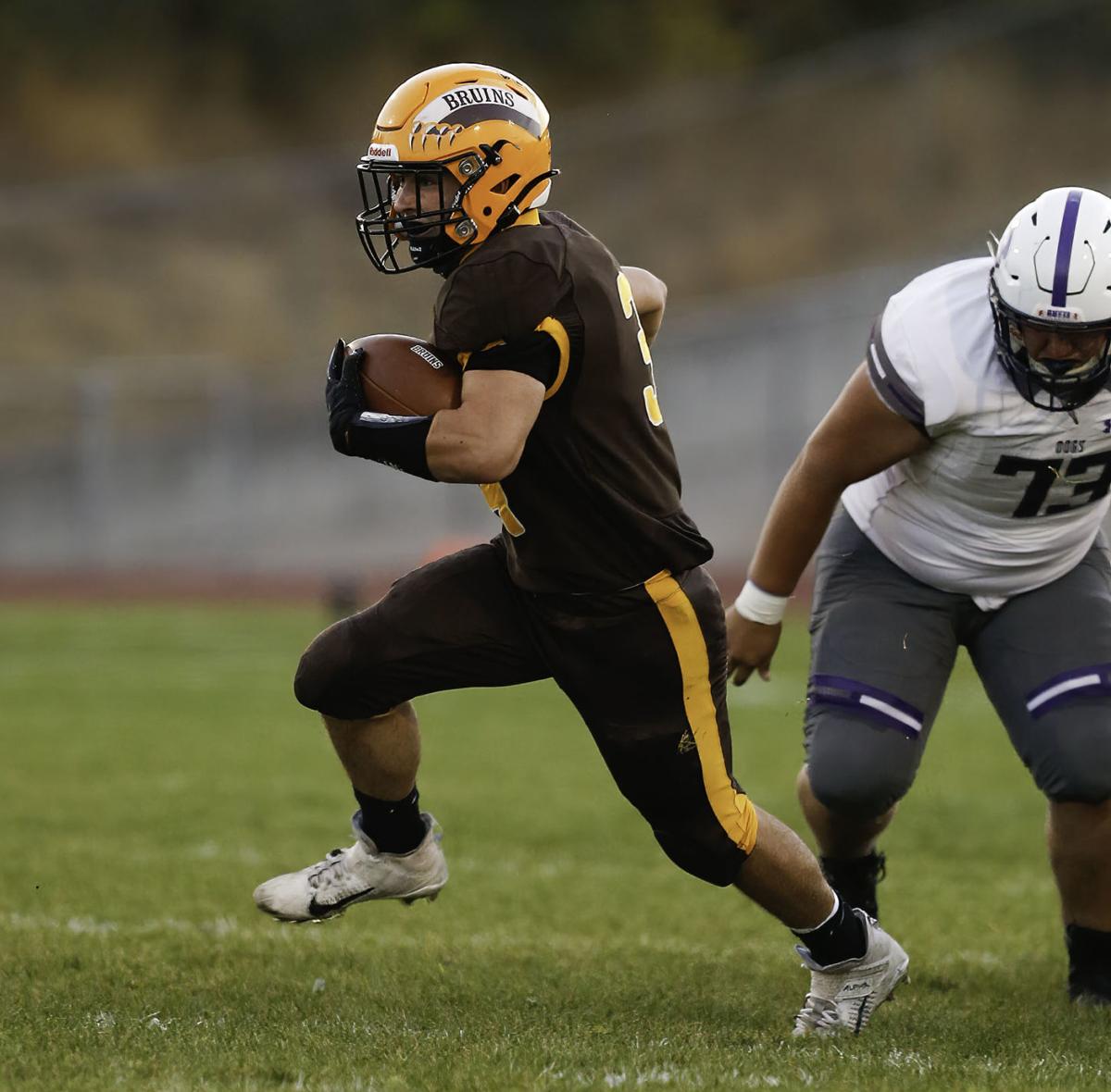 Capital running back Tiegan Cozzie runs the ball against Butte High on Friday night in a 20-13 loss for the Bruins in Helena.

HELENA — After starting the season 0-3 and falling behind 13-0 against Helena Capital, the Butte High football team needed a break.

And finally, the Bulldogs got the break ... or the bounce they needed, when Jake Olson blocked a Capital field goal attempt. The ball hopped right into the arms of Butte defensive back Christian Hansen who then scampered 65 yards for a score.

Wowza, this game just changed, kick blocked and returned about 65 yards for a score. Christian Hansen takes it all the way back. Capital up 13-7, 2:55 2Q #mtscores pic.twitter.com/Uy9rpxj4nF

Suddenly, Capital's 13-0 lead, which was about to be extended to three scores, was down to 13-7. More importantly, the momentum changed and the Bruins never got it back.

Bulldogs quarterback Blake Drakos then tossed two touchdown passes, one in the second quarter and another in the fourth, both to Ryan Neil, to complete the comeback and lead Butte to a 20-13 win.

"All year I just feel like we haven't gotten a break," Butte head coach Arie Gray said. "And then to finally have one go our way and to have the ball bounce like it did. We really just kept pounding the stone and pounding the stone."

After the blocked kick, Capital moved the ball back into Butte territory, but the Bruins were not able to turn it into points. Then, on the ensuing drive, the Bulldogs made their second consequential play of the night.

Drakos faked a run and rolled right, then looked back and found Neil wide open, who then ran into the end zone, capping the 50-yard catch and run, tying the game at 13-13, following a missed PAT.

"We needed a little bit of life," Drakos said. "But we have been running that play all week and we just needed that spark."

At the start of the third quarter, Capital once again moved the ball into Butte territory, but unlike in the first half, when the Bruins finished off two drives with Tiegan Cozzie touchdown runs, they turned it over on downs.

The two teams exchanged punts and with just over 10 minutes left, Drakos and the Bulldogs took over with the ball on their side of the 50.

Twice, Drakos was able to find Cameron Gurnsey for first downs, the second of which advanced the ball to the Capital 13. Two plays later, Drakos rolled right and found Neil for the go-ahead score.

"We just needed to have 11 people on the field doing their jobs," Drakos said. "And that's what we got on that drive."

Down seven, Capital was unable to muster a drive and punted back to Butte. The Bruins did get the ball back a couple times in the last few minutes, but were unable to convert either drive into points and when they turned it over on downs again with 20 seconds left, it was game over.

"This is huge," Drakos said. "If we could win out, we could possibly host a playoff game and that would mean a lot for us seniors."

The Butte senior finished the game 10-of-19 passing for 151 yards and two touchdowns, both going to Neil. Butte finished with 250 total yards compared to 287 for Capital, which got 36 rushing yards and two scores from Cozzie.

CHS opened the game on fire and following a three-and-out by Butte on the opening drive, the Bruins drove down the field for a score to go up 7-0 after one quarter on a Cozzie touchdown run.

In the second quarter, Cozzie found the end zone again and when Capital lined up for a field foal to go ahead 16-0, the Bulldogs still hadn't picked up a first down.

Then, Olson blocked Capital's kick, Hansen scooped and score, changing everything in just a matter of seconds.

"The ball got blocked, Jake (Olson) did a great job of getting a hand up," Hansen said. "And I just happened to be there."

For Capital, the loss could prove costly in the playoff race. A win would have moved the Bruins into fourth place by themselves at 2-2 in the Western AA. Instead, CHS is now tied for fourth with Butte, Missoula Big Sky and Missoula Hellgate.

The Bulldogs (1-3) will travel to winless Kalispell Flathead next week, while Capital (1-3) will pay a visit to Missoula Big Sky, before returning home to take on Missoula Hellgate.

Malta, Park City and White Sulphur Springs were some of the teams that moved up in the latest rankings.

Capital running back Carson DesRosier tries to hurdle a Butte defender while running with the ball during the Bruins 20-13 loss Friday night in Helena.

Butte High's Ryan Neil runs the ball against Helena Capital during a 20-13 win for the Bulldogs on Friday night.

Capital running back Tiegan Cozzie runs the ball against Butte High on Friday night in a 20-13 loss for the Bruins in Helena.