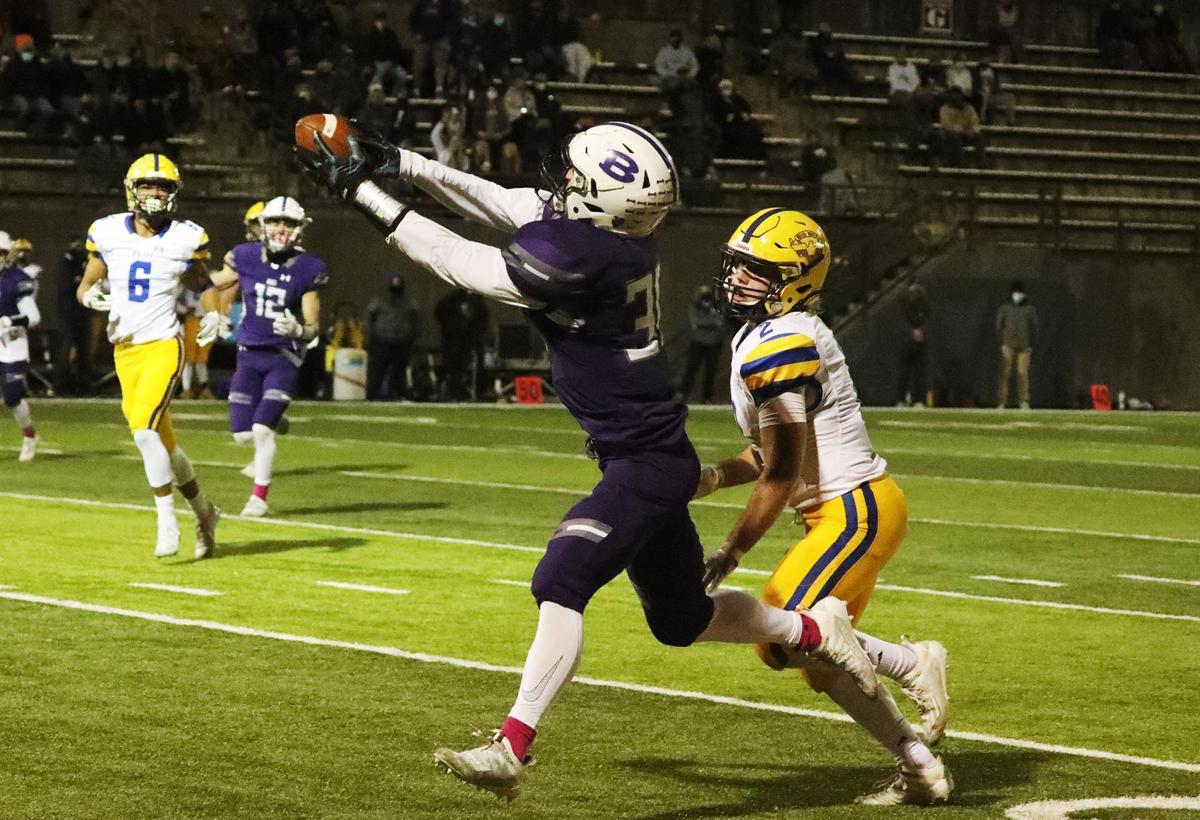 Butte High's Christian Vetter catches a pass near the end zone on Friday evening against the Big Sky Eagles in Butte. 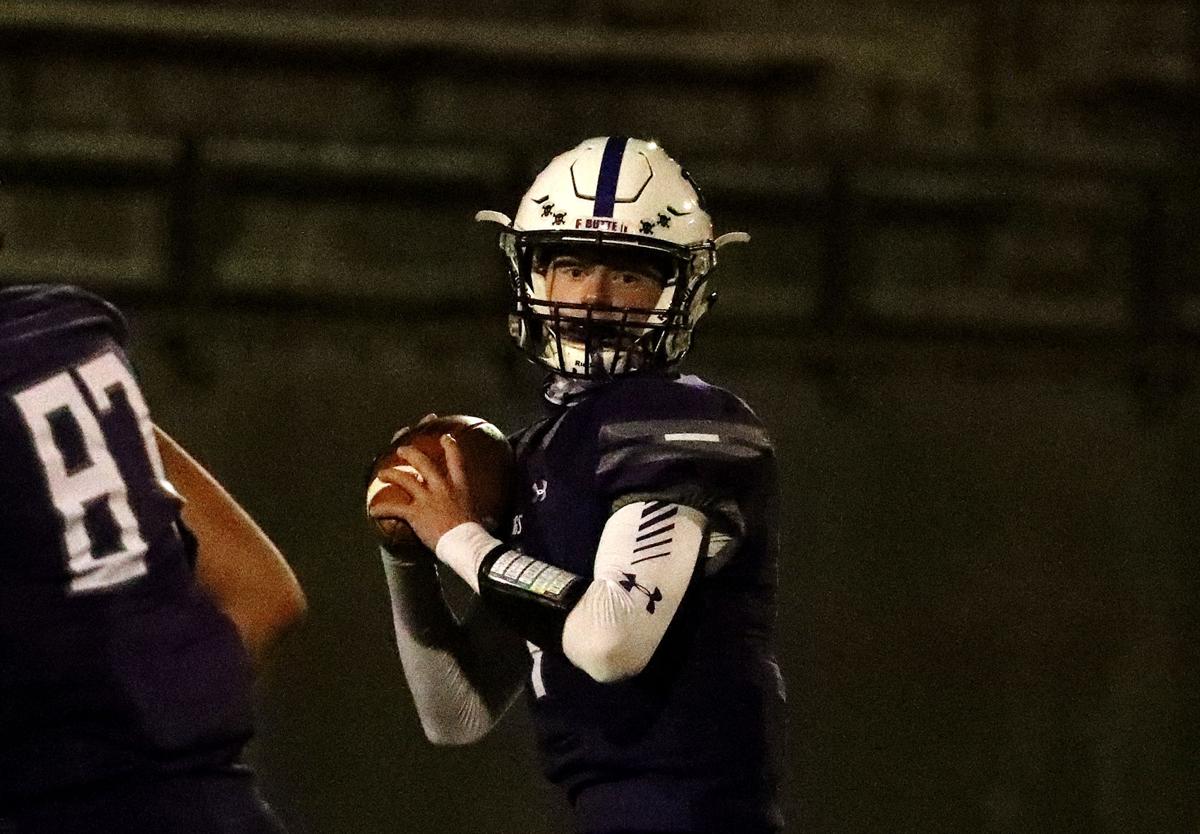 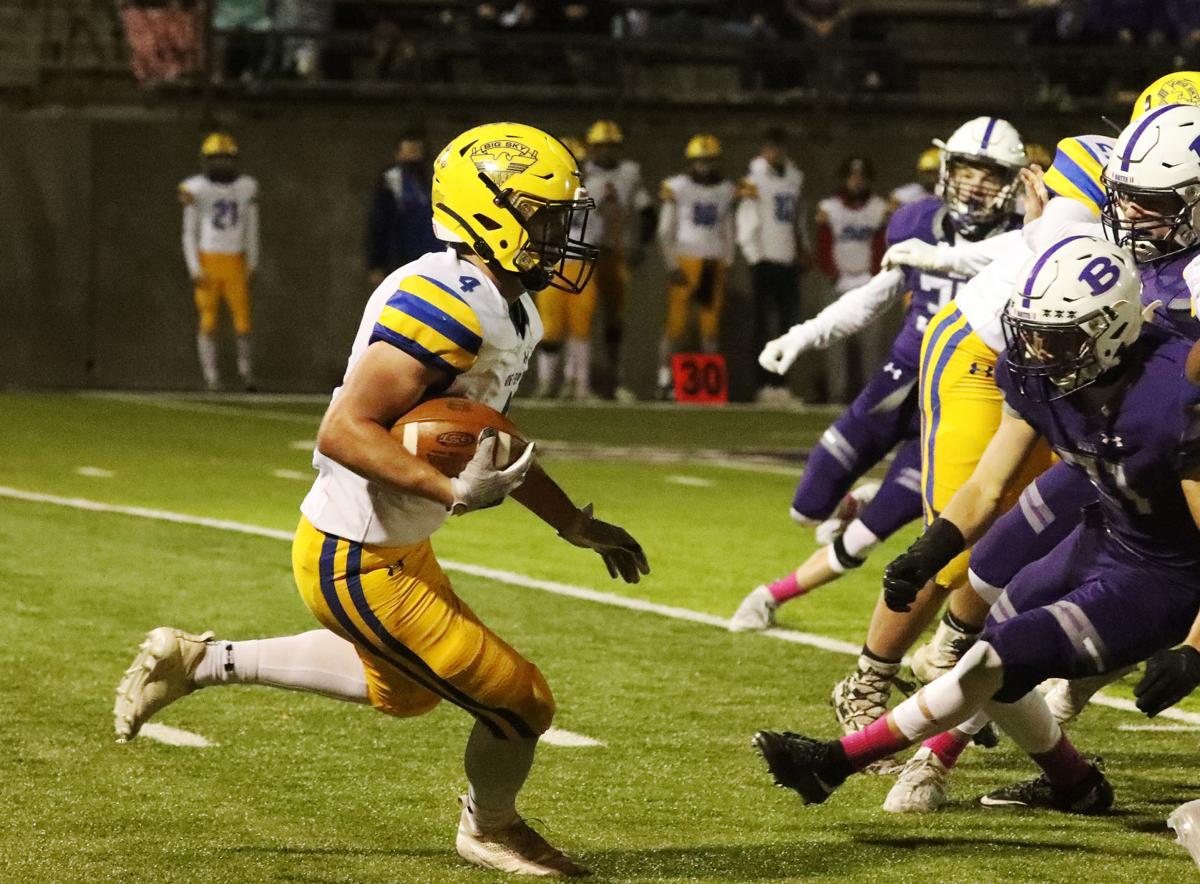 Big Sky's Shawn Huseby carries the ball on a punt return during the first quarter against the Butte High Bulldogs on Friday night in Butte.

Blake Drakos accounted for four touchdowns, Christian Vetter had a receiving and a rushing score and the Bulldogs used a fast start in the first quarter to bolt past Missoula Big Sky 51-33 in Butte’s final home game of the regular season on Friday at Naranche Stadium while clinching a postseason berth in the Class AA playoffs.

The Bulldogs were able to overcome a noteworthy performance from senior Big Sky quarterback Colter Janacaro who rushed for 208 yards and three scores and added another 158 yards and two touchdowns through the air.

With the win, the Bulldogs improved to 3-3 and clinched their third-straight victory in convincing fashion after opening the season with three consecutive losses. The Eagles fell to 1-5.

Butte scored on the first drive of the game on an 11-yard touchdown pass from Drakos to sophomore Cameron Gurnsey. The Eagles responded with a 59-yard scoring run from Janacaro.

Butte kicker Casey Kautzman tacked on a 43-yard field goal later in the quarter. Big Sky got a big return from Shawn Huseby on the next drive before Aidan Lee forced a Janacaro fumble to give the Bulldogs the ball back. Butte capitalized on a 38-yard strike from Drakos to Christian Vetter to put the Bulldogs up 17-7.

Janacaro then scored on a 3-yard run — Butte blocked the ensuing kick — to trim the Bulldogs’ lead to 17-13 to close out the first quarter.

Lee found the endzone midway through the second quarter to expand Butte’s lead to 24-13.

The Eagles responded with Janacaro’s third touchdown of the half, this one from 46 yards out. On Butte’s next drive, Gavin Vetter bolted into the endzone for a 2-yard score to give Butte a 31-19 lead to close out the half.

Neither team scored after the break until midway through the third quarter when Janacaro hit Shawn Huseby for a 16-yard touchdown to cut Butte's lead to a single possession at 31-25.

But Butte pulled away before the third quarter ended on an 8-yard run from Drakos and an 11-yard touchdown pass from Drakos to Gurnsey to make it 45-25 heading into the final quarter.

In the fourth quarter, Janacaro hit Mitch Mutalt for a 12-yard touchdown pass but Big Sky was held scoreless the remainder of the way. Christian Vetter scored his second touchdown of the day on a 27-yard run with 3 seconds remaining to put an exclamation point on Butte's win.

Butte closes out the regular season next week on the road against Missoula Hellgate while Big Sky hosts Kalipsell Flathead.

Look to the Chargers and Seahawks to make the playoffs

"It depends on what kind of person you are and how committed to the task you are. If you have those things you can be anything you want to be." — Colt Anderson

Check out who will be playing and coaching in the contest.

'Keeping a tradition': Michael Hupp to play in Shrine Game 74 years after his grandfather

William Hupp represented Cut Bank on the East team in the inaugural game. Representing the West team this year, Michael Hupp will play safety alongside his cousin, Jace Fitzgerald.

The East jumped ahead 12-0 in the first quarter before the West took the lead for keeps with 15 second-quarter points.

After four days of practice, camaraderie and fun, football players suited up for the 8-man Bob Cleverley All-Star game on a breezy Saturday evening in Butte.

A standout for the Scotties in football and wrestling, the all-star defensive back will be attending MSU to take courses in civil engineering.

Check out the scoring plays.

Butte High's Christian Vetter catches a pass near the end zone on Friday evening against the Big Sky Eagles in Butte.

Big Sky's Shawn Huseby carries the ball on a punt return during the first quarter against the Butte High Bulldogs on Friday night in Butte.