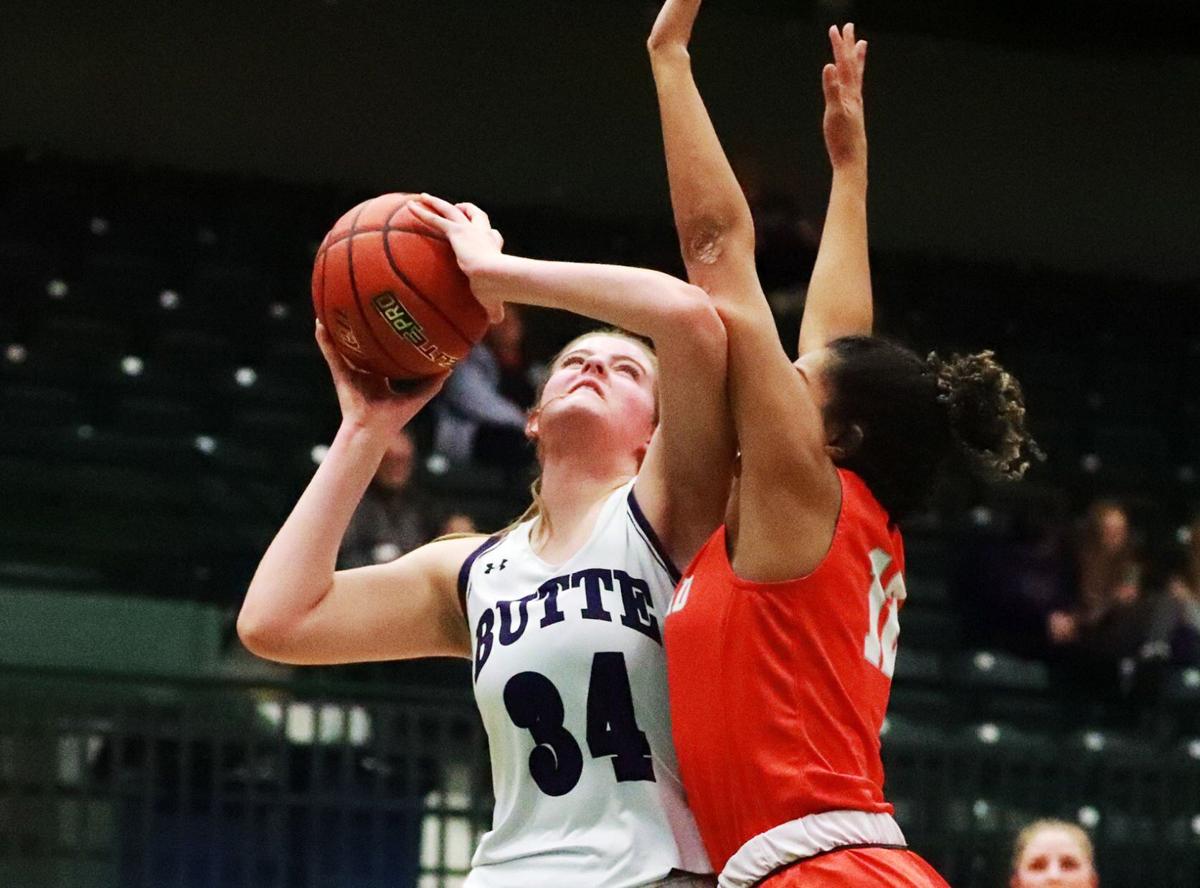 Butte's Ashley Olson takes the ball to the hoop earlier this month during the Bulldogs' home game against Kalispell Flathead. 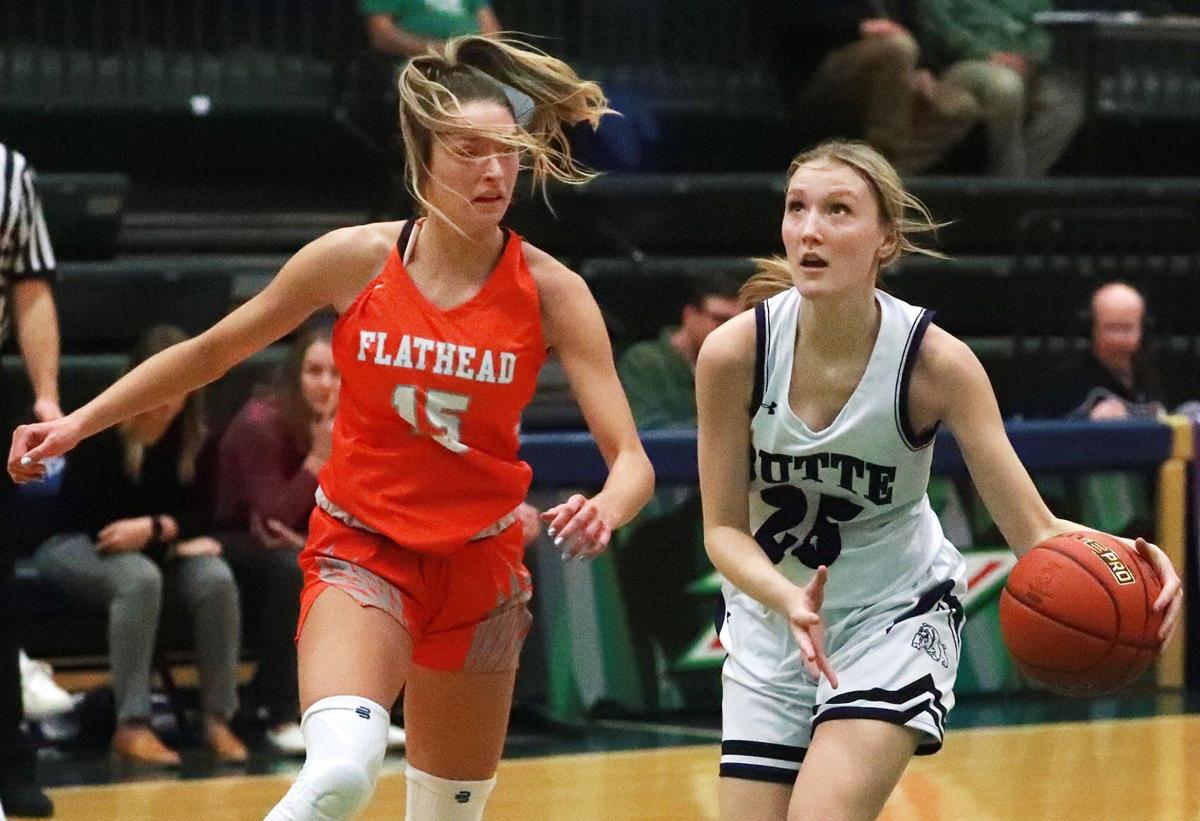 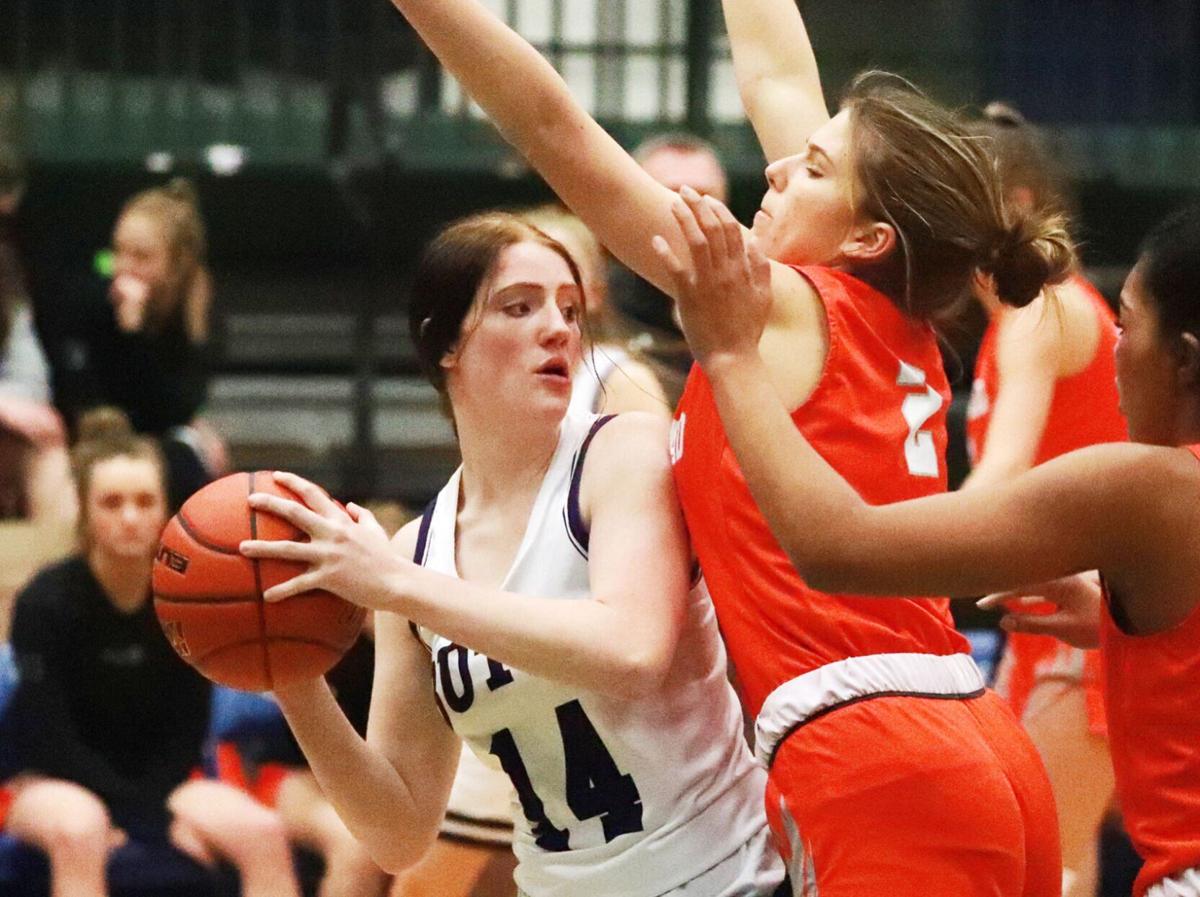 BUTTE — The Bravettes' timely shooting and athleticism were too much for the Bulldogs on Friday night as Kalispell Flathead defeated Butte 50-44 for a Class AA girls basketball road win at the Civic Center.

"They have a good mix of kids; really tall, lanky, athletic," said Butte coach Bryan Arntson. "They do a great job of scoring points in transition and getting some second-chance opportunities."

Flathead's Clare Converse led all scorers with 16 points, which included a pair of 3-pointers that were back-breaking for the Bulldogs.

"She's waking up a little bit," Bravettes coach Micah Hill said. "It's been fun to watch. She's been having some good practices and what she brings is leadership out there, too. She kept her poise. I was proud of Clare's game, for sure."

Flathead was all over the Bulldogs from the jump. The Bravettes' length and quickness around the perimeter and inside made it difficult for Butte to find a rhythm on offense.

The Bulldogs battled, though. Down 16-7 to begin the second quarter they grinded their way back into the game with defense and patience, taking what the Flathead defense gave them.

Emmarie Richards cut the lead to 18-12 with a 3-pointer. A pair of Brooke McGrath free throws and an Ashley Olson free throw made it 18-15, and Tylar Clary got a deuce to fall, making it a one-point game. Converse, as she often did, answered the Bulldogs' run with a made jumper to extend the Bravettes lead back to 20-17.

After Kodie Hoagland knocked down 1 of 2 from the line after she was fouled chasing down a defensive rebound, Butte was able to get the ball back with under 40 seconds to go in the half with a chance to hold for the last shot to tie or take the lead.

The Bulldogs did neither.

A turnover with about 8 seconds left in the half put the ball back in Converse's hands. She took it right down the court and buried a 3-pointer from the right wing as the buzzer went off, giving Flathead a 23-18 halftime advantage. It was a deflating end to an otherwise solid quarter for the Bulldogs.

"That's kind of kind of been our Achilles heel," Arntson said of Butte's turnovers. "This was the first game it really came back to haunt us. We were able to get away with some things in the last few games, but (Kalispell Flathead) is really good, and they're not going to let you get away with stuff like that."

As they did to open the game, the Bravettes came firing out of the break. Flathead started hitting shots again after a cold second quarter, and led 31-21 about halfway through the period.

Back came the Bulldogs once again. McGrath scored five unanswered points with a triple and two free throws, making it 33-26. Butte appeared to have all the momentum by the end of the quarter as Clary hit a two-point jumper at the horn to bring the Bulldogs within five, 33-28. Flathead was also in foul trouble. Multiple starters had three fouls and it had accumulated eight team fouls, so the Bulldogs would be in the bonus for the final eight minutes.

Avery Chouinard doused Butte's fire with a 3-pointer to open the fourth, and Flathead took off on an 11-5 run. The Bravettes led 44-32 about halfway through the period after Converse's second triple of the night. The Bulldogs never let the game get out of hand but they were never quite in control, either. After a litany of free throws by both teams to close out the game, Flathead prevailed 50-44.

Olson led the Bulldogs with 11 points and Clary had 10. McGrath finished with nine points and was 4-for-4 from the charity stripe.

Maddy Moy was also efficient for Flathead, as she put up 14 points.

Butte has a chance to bounce back in fewer than 24 hours. It was host Kalispell Glacier on Saturday at 3 p.m. in the Civic Center. Flathead goes to Missoula Sentinel on Saturday for a 1 p.m. tip.

The Bulldogs are home Friday and tip with Missoula Sentinel at 7 p.m. at Butte High

The Copperheads outscored the Maroons 35-18 in the second half.

50 years of girls basketball: Malta has been Montana's 'crazy hot spot' for championships

Malta has won 10 Class B state championships in the 50 years that girls basketball has been sanctioned in Montana.

Chiefs end up on top in potential game of the year

Butte's Ashley Olson takes the ball to the hoop earlier this month during the Bulldogs' home game against Kalispell Flathead.