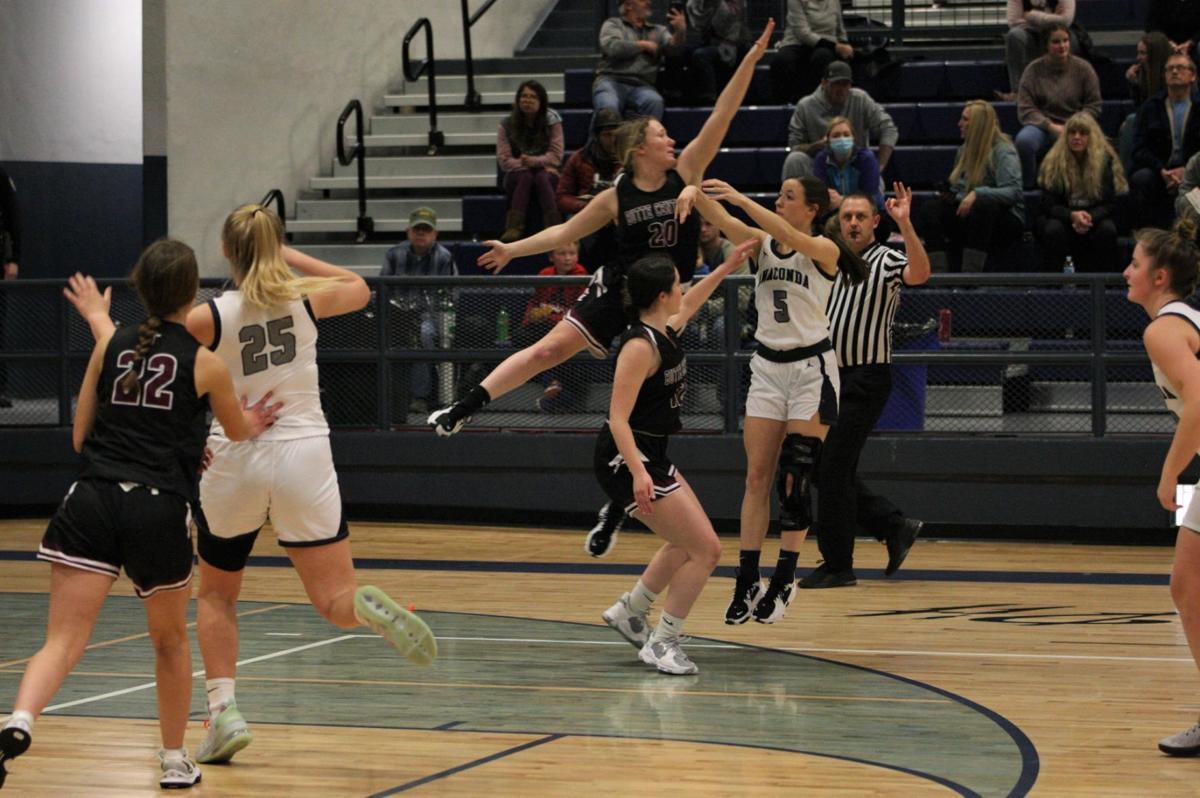 Anaconda's Sami Johnson drains a 3-pointer over Sofee Thatcher, left, and Brenna Foley on Thursday night during a non-conference game at the Snake Pit. 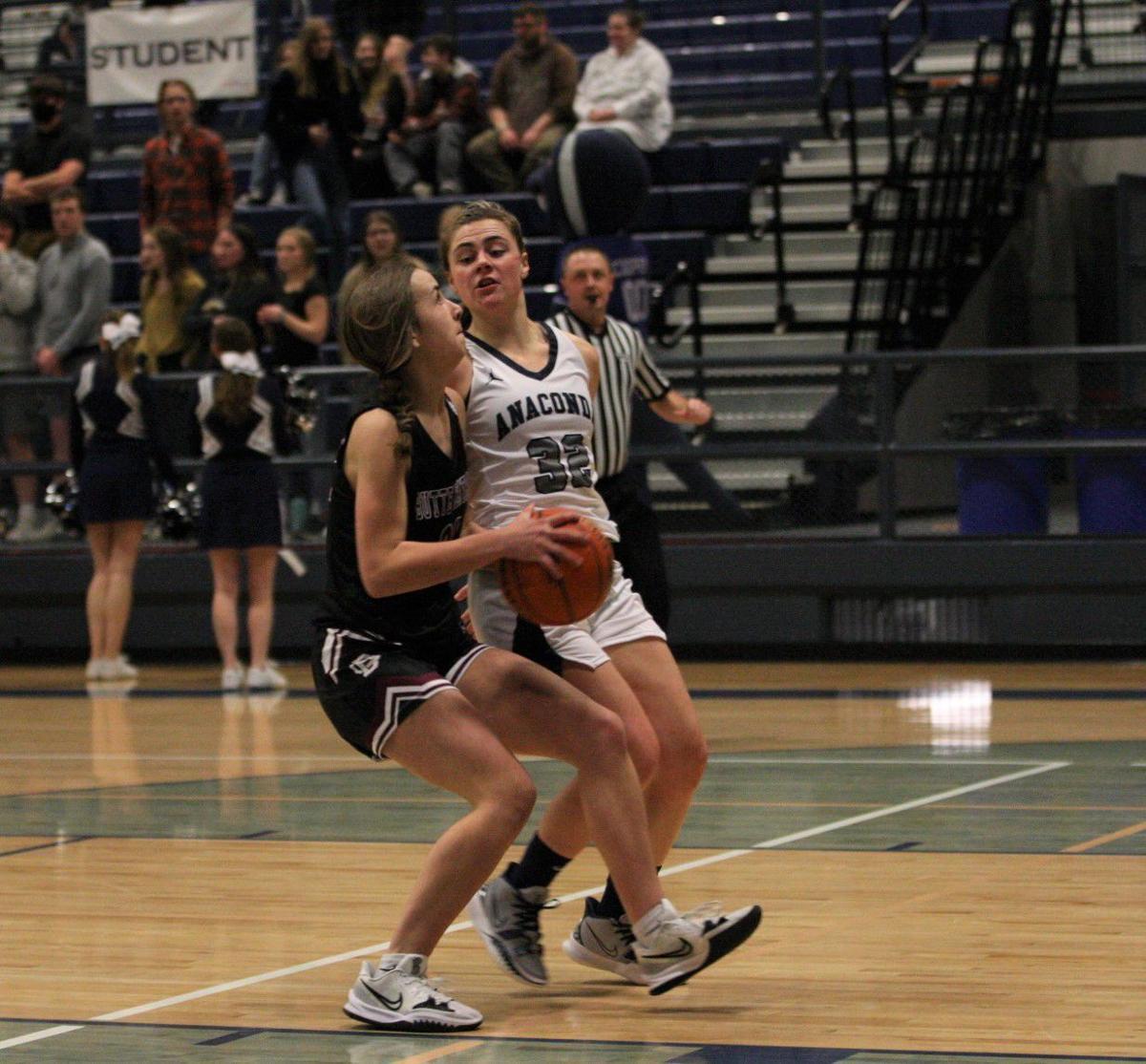 Butte Central's Brooke Badovinac drives to the hoop against Anaconda's Alyssa Peterson during the first quarter of Thursday night's game at the Snake Pit.

ANACONDA — The Copperheads had answers when the Maroons did not.

The Class B Anaconda girls basketball shot lights out in the second half on its way to a 52-39 victory over Class A Butte Central on Thursday night at the Snake Pit.

Trailing 21-16 at the half, the Copperheads came out firing after the break. Their offensive approach didn't change after the first half but there was one fundamental difference: shots were going in.

"We struggled shooting in the first half," said Anaconda coach Andy Saltenberger. "Seems like you always do that after we had a pretty good shooting night the other night. Seems like their next game is always tough to get some to drop to start with. But they definitely shot a lot better in the second half."

Anaconda led 9-8 after the first quarter but after a solid second quarter from the Maroons, Central took a five-point lead into the break. Even though they trailed against a formidable Class A opponent, the Class B Copperheads didn't appear the slightest bit concerned. They kept shooting with confidence and outscored the Maroons 35-18 the rest of the way.

"We've been up and down all year so we didn't even talk about it," Saltenberger said. "We weren't down that much. It really wasn't a conversation. They usually come out and make some pretty good adjustments."

Makena Patrick paced the Copperheads with 18 points and Alyssa Peterson had 10. Maniyah Lunceford, who did a lot of the dirty work down low scrapping for rebounds and put-backs, finished with eight points. Sami Johnson had seven points.

The Maroons, who have had to deal with players rotating in and out of their lineup for games and practices due to COVID protocols, were out of sync. They were fine when the defense created turnovers and the offense could get out in transition, but the lack of continuity showed up in the half court where the Anaconda defense shut them down.

"We struggled in the fourth quarter," said Central coach Meg Murphy. "We had (Sofee Thatcher) come back. It's going to take some time for her to get back in the fold. She's been out 21 days, and playing with six kids, practicing with six kids is never efficient. So getting kids back is really important for us today. Then you learn we have one more positive so we're down another couple kids, so it's a frustrating thing."

Trying to mount a comeback against a team who isn't turning the ball over is tough enough, but missing shots close to the rim doesn't help matters.

"Our issue was how many how many bunnies did we lose and how many shots in the middle of the key did we miss?" Murphy said. "We didn't shoot very well."

Down the stretch during the fourth quarter, every time Central cut into the Copperheads' lead Anaconda answered right back.

Forced to press, the Maroons came away with a steal and a quick bucket to make it 44-37. Right on cue, Anaconda scored on its next two possessions thanks to clutch free throws from Lunceford and Patrick to ice the game.

50 years of girls basketball: From concrete floors to a 3,000-point scorer, girls hoops have come a long way in Montana

Glendive’s victory over Deer Lodge in the first championship was the culmination of a long road toward sanctioning high school girls basketball in Montana after a 64-year hiatus – a milestone marking its 50th anniversary this winter.

50 years of girls basketball: A Montana timeline from 1897 to the present

From the first recorded activity in 1897 to now.

Anaconda's Sami Johnson drains a 3-pointer over Sofee Thatcher, left, and Brenna Foley on Thursday night during a non-conference game at the Snake Pit.

Butte Central's Brooke Badovinac drives to the hoop against Anaconda's Alyssa Peterson during the first quarter of Thursday night's game at the Snake Pit.