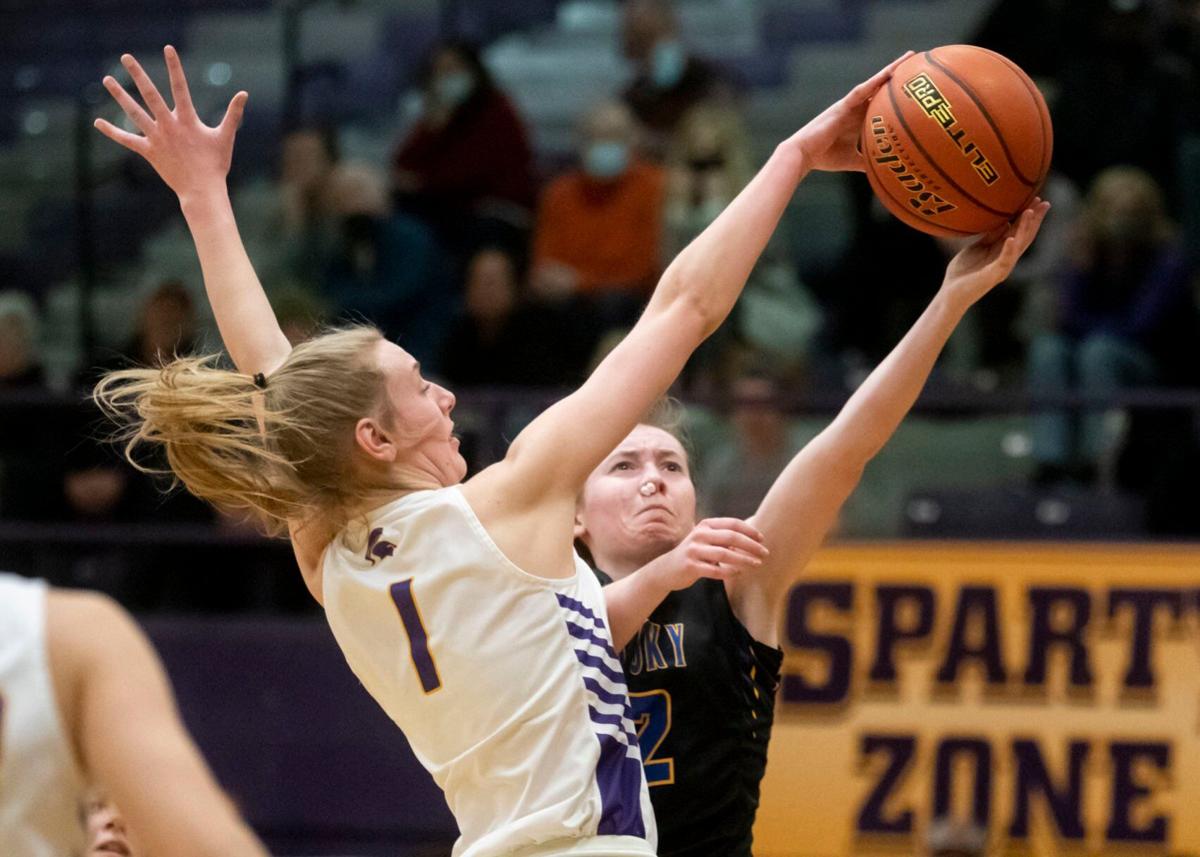 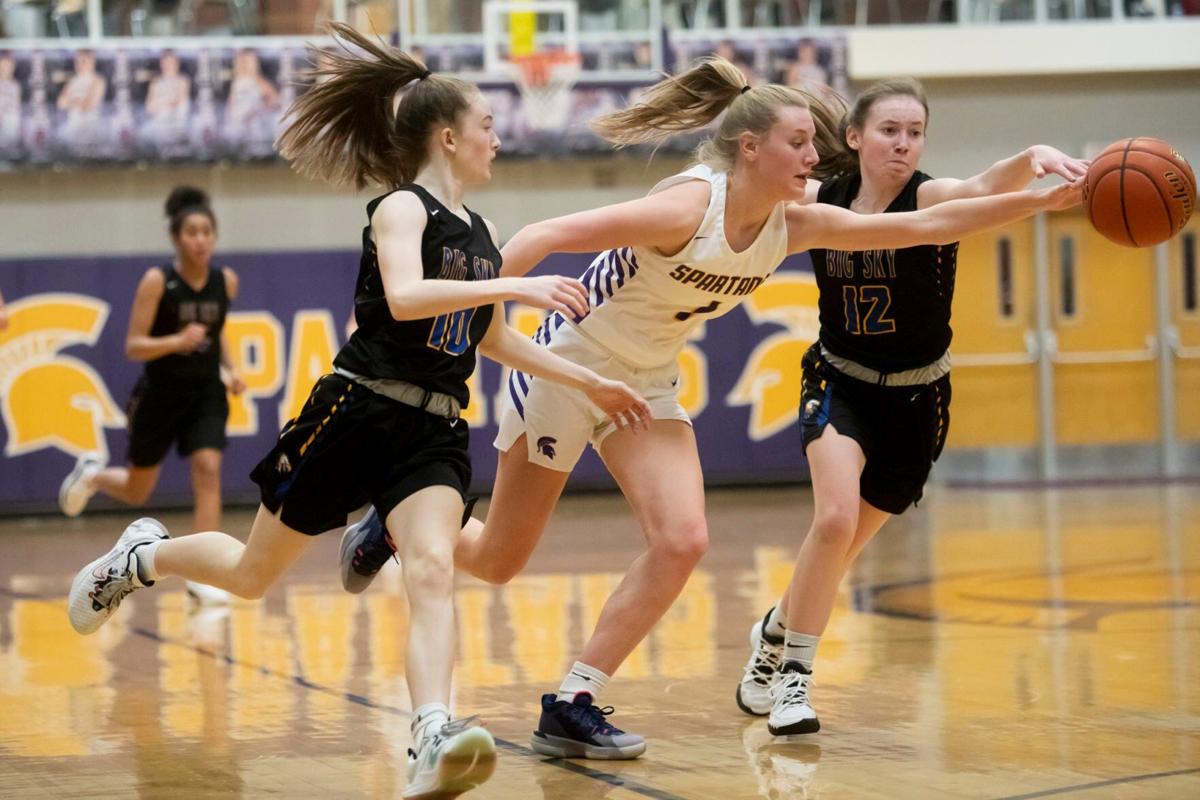 Editor's note: Games will be reported as we receive them.

• Billings Senior 66, Billings West 62: Melo Pine paced three players in double figures with 16 points as the Broncs took a nip-and-tuck crosstown game from the Golden Bears, winning at the Golden Dome for only the third time in school history. The others were in 1965 (66-47) and 2004 (71-57). Chazz Haws scored 14 and DeMarcus Johnson 13 for Senior, which led by five at halftime. Gabe Hatler led all scorers with 23 points and Sam Phillips added 17 for West.

• No. 5 Missoula Sentinel 60, Missoula Big Sky 54: Kaden Sheridan led with 13 points and Riley Allen added 11 as the Spartans opened an eight-point ead after one quarter and maintained it the rest of the way in a crosstown win over the Eagles. Joe Weida added eight for Sentinel. Louis Sanders scored 17, Eamon Higgins 11 and Josiah Cuaresma 10 for Big Sky.

• No. 3 Hamilton 63, East Helena 50: Eli Taylor pumped in 16 points to lead four players in double figures as the Broncs rolled to a 12-0 first-quarter lead and kept the Vigilantes at arm's length the rest of the way. Asher Magness added 13, Liam O'Connell 12 and Tyson Rostad 10 for Hamilton. Kaeden Sager popped in 16 points and Kobe Mergenthaler 13 for East Helena.

• Miles City 78, Sidney 36: Dalton Polesky had the hot hand with 23 points and Zach Welch was right behind with 21 as the Cowboys rolled the Eagles. Ryder Lee backed them with 16 for Miles City, and Logan Muri added nine.

• No. 1 Lodge Grass 92, Huntley Project 40: Damon Gros Ventre poured in a season-high 46 points — topping his previous best of 42 — and DC Stewart backed him with 20 as the Indians raced to a 33-4 lead after one quarter and coasted past the Red Devils. Sean Turns Plenty added nine for the defending state champions. Cade Sorlie led Huntley Project with 15 points.

• No. 5 St. Ignatius 91, Two Eagle River 31: Kellen McClure's 20 points led by players in double figures and the Bulldogs remained unbeaten by crushing the Eagles. Zoran LaFrombois scored 17, Cederick McDonald 16, Jadence Peone 13 and Ross McPherson 10 for Mission, which led by 13 after one quarter and outscored Two Eagle River 32-8 over the next eight minutes for a 37-point lead at intermission.

• No. 6 Florence-Carlton 71, Anaconda 23: Blake Shoupe led a balanced offense with 15 points and Jace Pedersen chipped in with 14 as the Falcons soared to a 19-point lead after one quarter and 39 by halftime. River Hurley scored seven for Anaconda.

• St. Regis 59, Alberton-Superior 36: Kaleb Park and Tanner Day led with 16 points apiece, and John Pruitt and Caleb Ball chipped in with eight each as the Tigers pummeled the Bobcats. Isaac Miller scored 10 and Wyatt Haworth nine for Alberton-Superior.

• Valley Christian 51, Victor 31: Eyan Becker and Asher Beaudin each poured in 13 points for the Eagles, and Riley Reimer added 11 points.

• Missoula Sentinel 46, Missoula Big Sky 36: Brooke Stayner scored 10 points and the Spartans bolted to a 16-4 lead after one quarter, saw the Eagles pull within three at halftime, and then took over with a 14-6 third quarter. Olivia Huntsinger helped with nine for Sentinel. Kadynce Couture scored 16 to lead Big Sky.

• No. 5 Butte 57, No. 4 Dillon 43: Kodie Hoagland led all scorers with 18 points and the Bulldogs built an 11-point halftime lead in handing the Class A Beavers their first loss of the season. Emmarie Richards scored nine and Laura Rosenleaf eight for Butte. Halle Fitzgerald scored 12 and Lauryn Petersen eight for Dillon.

• Hamilton 54, East Helena 33: Layne Kearns had the hot hand with 25 points and Ayda Griffin chipped in with 10 as the Broncs took care of the Vigilantes. Tayrn Searle added eight for Hamilton, which led by 12 at halftime. Dymon Root's nine points led East Helena.

• Frenchtown 60, Polson 30: Sadie Smith scored 15 points, Demi Smith added 12 and Carah Evans 10 as the Broncs rode a 17-4 second-quarter surge past the Pirates. Areanna Burke scored 12 for Polson, which trailed by 23 at intermission.

• No. 9 Eureka 51, Libby 14: Reena Truman paved the way with 14 points and the Lions rolled to an 18-4 first-quarter lead and cruised past the Class A Loggers, scoring all 51 points in the first three quarters on the way to winning the Kootenai Cup. Jadyn Pluid scored nine, and Jimena Sanchez and Ixone Coteron eight each for Eureka. Taylor Munro scored six for Libby.

• No. 2 Colstrip 61, St. Labre 14: Malea Egan scored 14 points to pace four players in double figures as the Fillies coasted past the Braves after opening with a 25-0 first quarter. Baily Egan scored 13, Gracie Bradley 12 and Canzas HisBadHorse 10 for Colstrip.

• No. 8 Anaconda 72, Florence-Carlton 53: Makena Patrick led the way with 21 points and Alyssa Peterson provided 16 as the Copperheads took care of the Falcons. Maniyah Lunceford added 13 and Kora Kelly nine for Anaconda, which led by 10 at halftime and 18 after three quarters. Kolbi Wood scored 15, Kylie Kovatch 12 and Kasidy Yeoman 10 for Florence-Carlton.

• St. Ignatius 78, Two Eagle River 31: Kooper Page pumped in 23 pionts, Madyson Currie added 17 and Kason Page backed them with 15 as the Bulldogs raced past the Eagles.

• No. 3 Bigfork 69, No. 7 Thompson Falls 30: Braeden Gunlock scored 18 points, Ana Davey added 15 and the unbeaten Valkyries made a statement with a trouncing of the Bluehawks. Emma Berreth provided 14 points and Scout Nadeau eight for Bigfork, which led by 17 at halftime and nearly doubled the lead in the third quarter. Roni Hanks scored 11 for Thompson Falls, which suffered its first defeat.

• Absarokee 44, Roberts 36: Tandy Planichek kept up her hot scoring with 23 points and the Huskies rallied from an eight-point first-quarter hole to topple the Rockets. Absarokee pulled within three points at halftime and then opened an eight-point gap with a 17-7 third quarter. Hailey Croft scored 14 and Jozelyn Payovich 12 for the Rockets.

• Wibaux 63, Plevna 41: Rylee Smith had a big night with 20 points and Annika Lunde backed her with 16 as the Longhorns bulled their way past the Cougars. Ashlynn Varner scored 10 and Elorah Amsler nine for Wibaux, which led by nine at halftime but pushed the margin to 17 after three quarters. Chloe Tudor scored 15, Hayden Lane 11 and Sophia Tudor 10 for Plevna.

• Victor 53, Valley Christian 29: Virginia Brown led a balanced Pirates attack with 10 points in a romp over the Eagles. Ten players scored for Victor, which trailed by three after one quarter but used a 23-12 second quarter to pull away.

For all your basketball box scores from around the state, go to 406mtsports.myteamscoop.com.

The top two teams in Class AA keep winning, though there was some shakeup in the Class B 406 Sports' girls rankings and an unbeaten newcomer for the Class C boys.

Check out how the league races are shaping up.