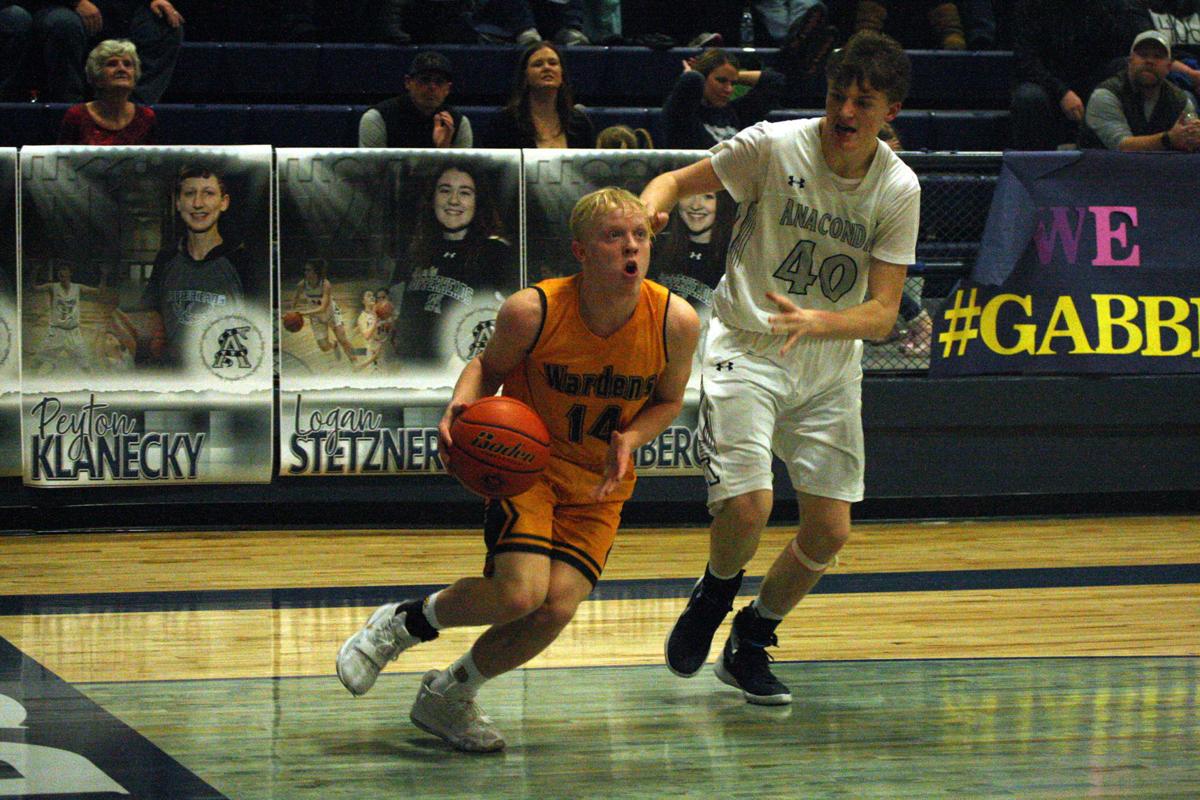 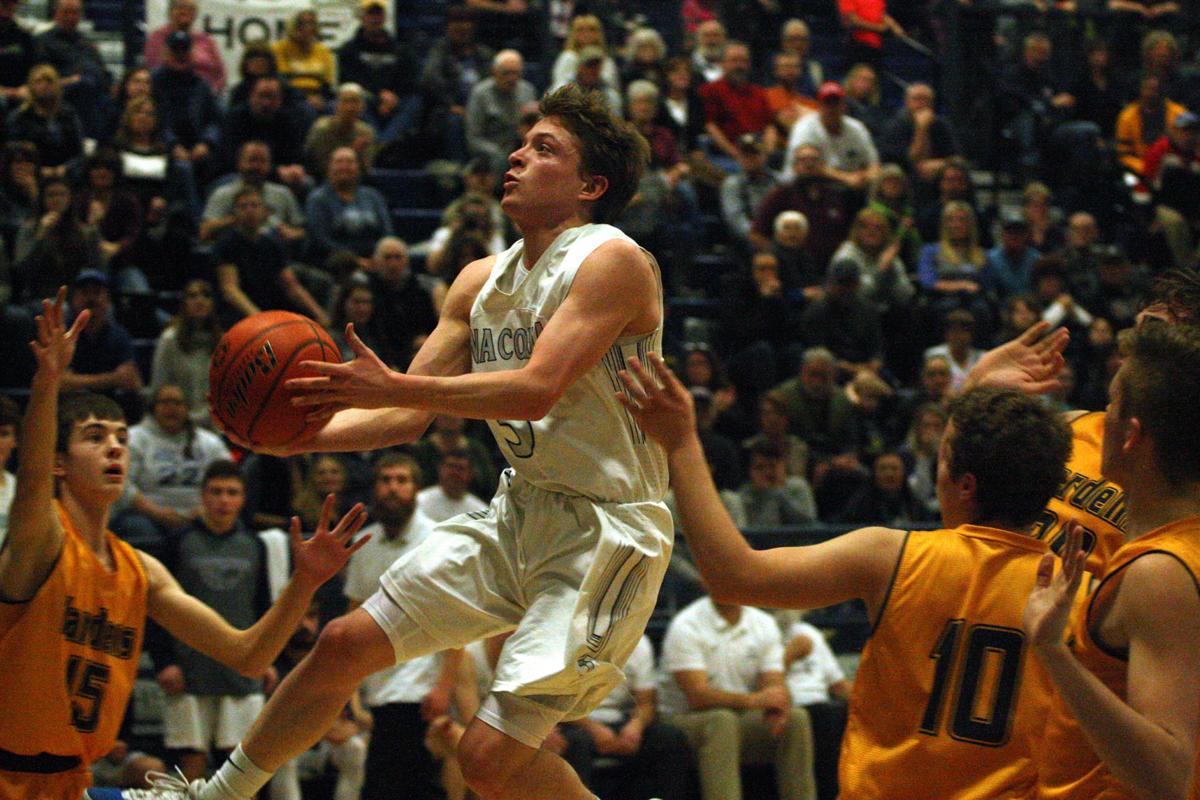 Anaconda's Michael Galle attempts a layup during Deer Lodge's win over the Copperheads in Anaconda Friday.

ANACONDA — Deer Lodge came into Anaconda with the hopes of taking the No. 1 spot in District 6B.

The Wardens defeat the Copperheads 67-53, as Deer Lodge improved to 5-2 while dropping Anaconda to 4-2, taking control of their destiny in terms of winning the district.

Anaconda head coach Rochie Estes said that his team struggled to get going early, and that Deer Lodge capitalized on their slow start.

“We came out kind of flat in the first half,” Estes said. “Seemed like one of those nights where nothing could go our way. Early foul trouble, can’t make a shot and not executing the game strategy. To score 16 points in the first half is not like our team.”

The first half was one to be proud of for the Wardens, but a regrettable start for Anaconda.

While the Copperheads were unable to muster double-digit scoring in either of the first two quarters, Deer Lodge saw several players make shots, but the tandem of sophomore Logan Nicholson and junior Aidan Thompson had especially impressive first halves.

Nicholson made two early three-point efforts for seven points in the opening quarter, which was matched by Anaconda junior Braedon Sawyer.

However, Thompson’s six second quarter points saw him enter the break with 10, while Deer Lodge junior guard Ozzie King complemented Thompson with six of his own in the second quarter, propelling Deer Lodge to a 33-16 lead.

Wardens head coach Dakota Norris said that the amount of players that can make baskets is a key improvement between this year’s squad and previous years’.

“It’s kind of been the difference,” Norris said. “This year’s team versus a couple of last years. We’ve had some studs come through here and we’ve had to rely on them to score, this year we have 12 kids that can put the ball in the hole. It’s the key to winning games.”

Anaconda came out with more intensity in the second half, and the Copperheads’ press defense began to produce results, as Deer Lodge began to turn the ball over and create more scoring opportunities for Estes’ team.

It looked as if Anaconda would have a chance to make it a tight game going into the fourth quarter, but Anderson, Thompson and company consistently matched the Copperheads’ runs with deflating baskets to ensure a big victory for the Wardens.

Norris complimented Anaconda for a strong defensive showing, and that the opposing press was a difficult thing to overcome.

“We knew they would come out in their half-court trap,” Norris said. “[Estes’] defense kicked our butt. We’ve been working on it for a couple weeks, and I’m really proud that the boys executed.”

The Wardens were led by Nicholson’s 16 points, with Thompson backing up with an impressive 14-point performance. Anderson added 12 points, and senior Ethan Bossert and junior Ozzie King each contributed seven points.

For Anaconda, senior guard Mike Galle put up 17 on senior night, scoring 12 points in the second half. Sawyer made two treys, finishing with 14 points. Sophomore Eli Saltenberger tacked on nine points for the Copperheads.

Estes said that the loss comes at a better time than in the postseason, and that playing a big game against a rival was a positive lesson going forward.

“I am a believer in wake-up calls,” Estes said. “We need to do something better and learn from our mistakes. It was a big game, big performance and a lot of pressure on the kids, like tournament time. I think it was a good experience.”

The Copperheads head to Missoula to take on Missoula Loyola Tuesday, while Deer Lodge heads to Three Forks on Valentine’s Day.

Games will be played June 12 at Sheridan College and June 13 at Rocky Mountain College.

TWIN BRIDGES — Coming up to the Class C tournament, Twin Bridges’ Bryce Nye and Charlie Kruer were asked about their path to Missoula.

Help us pick the 406 MT Sports Athletes of the Month

Who do you think should be our March honorees?

DEER LODGE — Dakota Norris balances many titles at Powell County High School, but the most difficult one to manage over the past week has been “coach.”

MISSOULA — After a seven-year drought, the Butte High boys basketball team is finally making its return to the State AA tournament.

BUTTE — A season, perhaps a lifetime of work evaporated at state tournaments across Montana on Friday evening for hundreds of high school athletes.

Anaconda's Michael Galle attempts a layup during Deer Lodge's win over the Copperheads in Anaconda Friday.