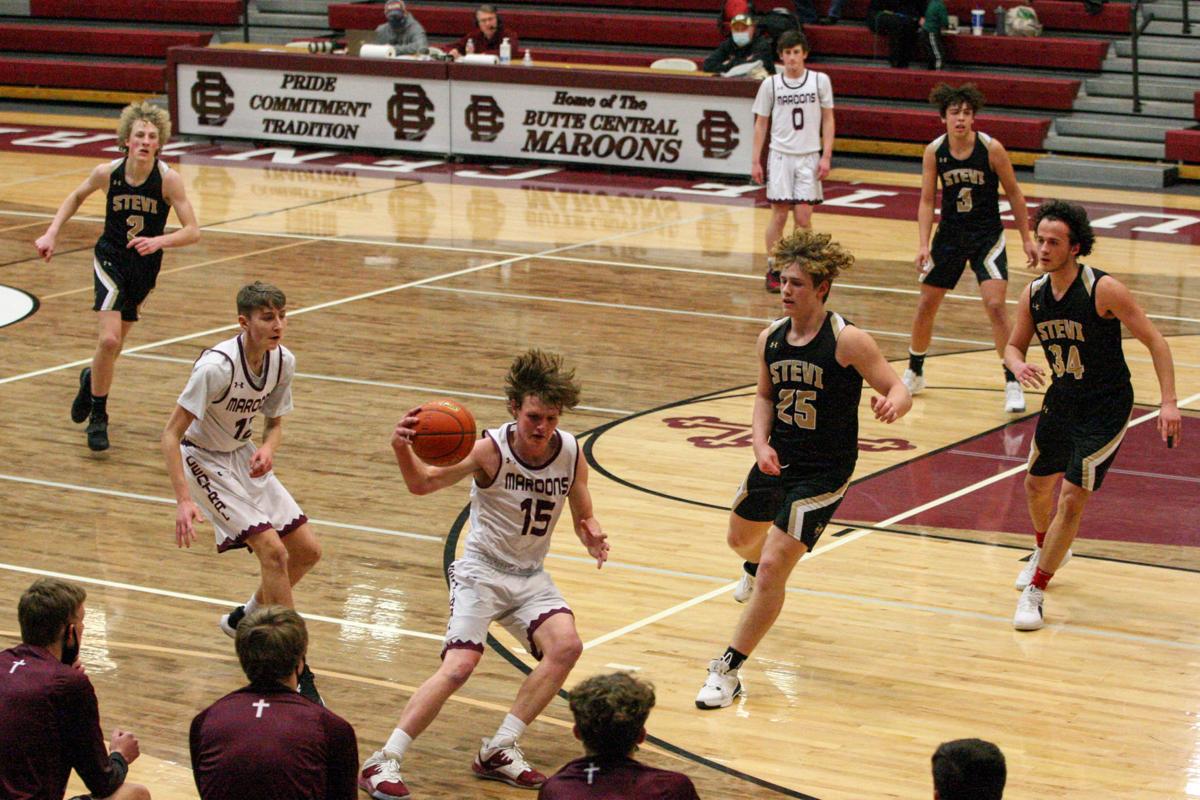 Egan Lester corrals the ball near the sideline Monday night during Butte Central's victory over Stevensville at the Maroon Activity Center. 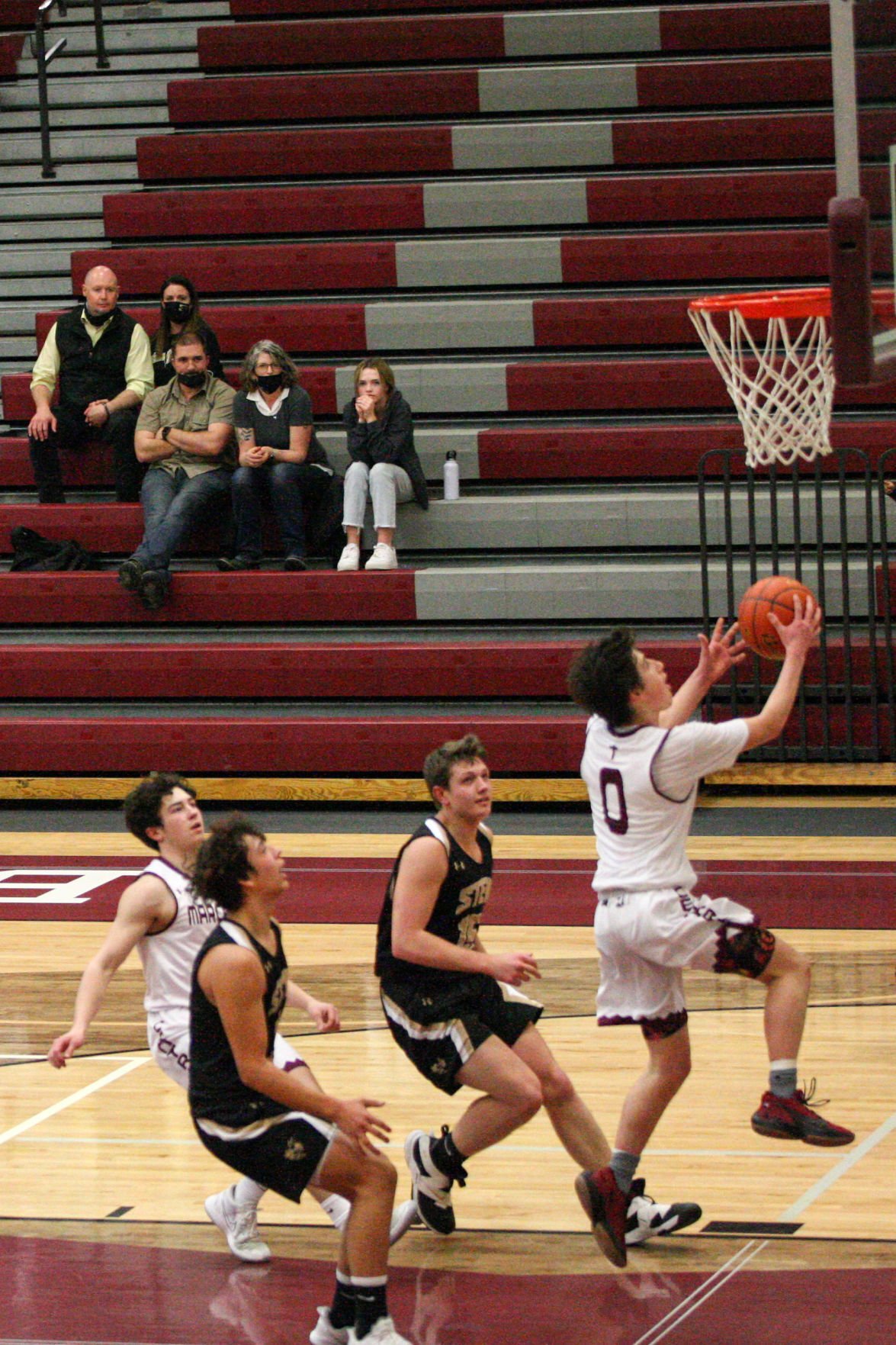 Bryson Sestrich drives to the hoop for a layup Monday night in Butte. 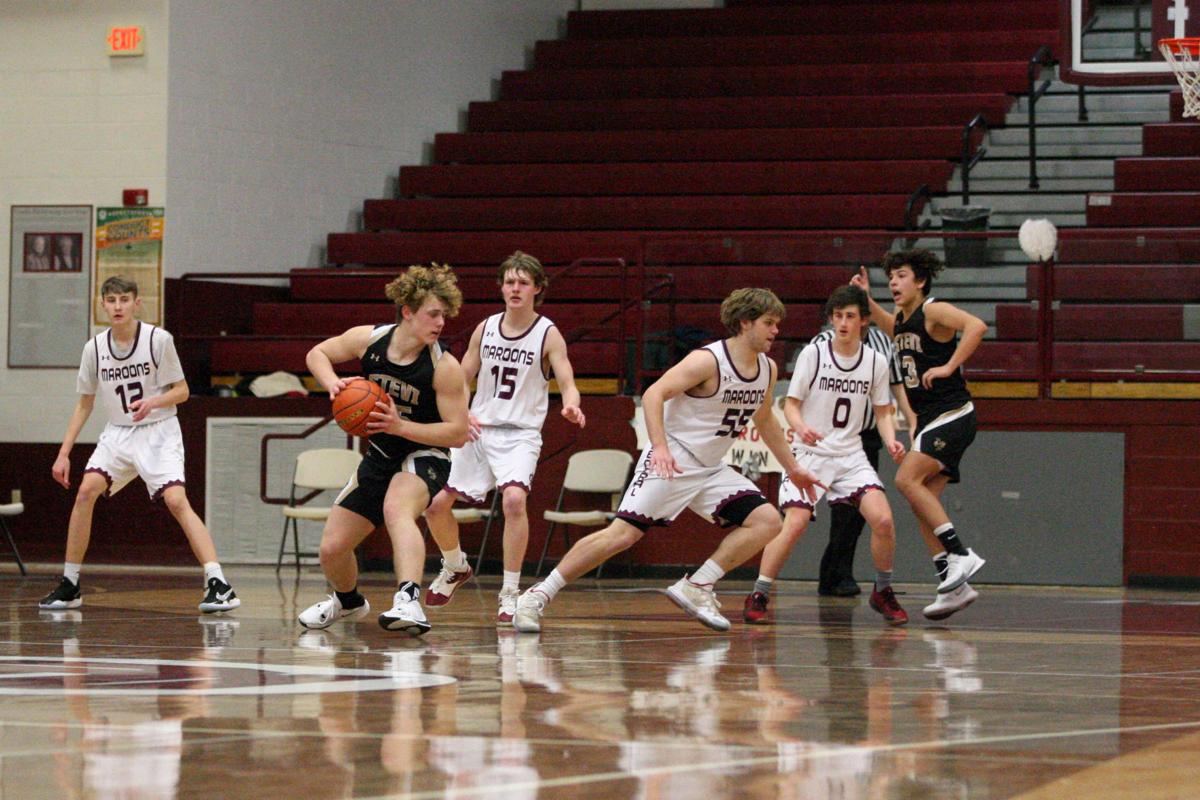 BUTTE – Nothing came easy for the Yellowjackets at the Maroon Activity Center. Butte Central made sure of that.

In Monday night’s Western A play-in game, the Maroons leaned on their signature relentless man-to-man defense and a huge third quarter run to rout Stevensville 72-23.

“We were much better at generating our own enthusiasm in the second half,” said Butte Central coach Brodie Kelly. “With this lack of crowd, it’s dead in here. It’s hard to get any outside energy.”

The third quarter proved to be the fatal blow at the hands of Central, but the Maroons laid the groundwork during the first half. Suffocating defense resulted in 17 turnovers by the Yellowjackets before the intermission, and Butte Central took a 33-14 lead into the break.

“We had to adjust our principles a little bit,” Kelly said. “We anticipated they’d want to have long possessions. So we tried to be more active on the ball than we typically are, and I think that led to some turnovers”

At the beginning of the third quarter, Stevensville was running on fumes and a 22-2 run by Central put the game on ice.

“We play the same principles all the time,” Kelly said. “And because we don’t mix up defenses a lot, sometimes we get a feel for what the other team is doing early in the game, and then we start to anticipate a little better.”

Bryan Holland and Dougie Peoples paced the Maroons offense with 13 points apiece. Bryson Sestrich and Kyle Holter added 11 apiece. Kellan Beller was the only Yellowjacket in double figures with 11.

“For us, it’s about consistency,” Kelly added. “We played our best basketball against Hamilton and we took a step back against Frenchtown. In tournament time, you don’t have room for those errors.”

The Yellowjackets are one of the Southwestern A’s younger teams, and coach Clayton Curley was proud of his team’s improvement over the course of the season.

BUTTE — The Butte Central Maroons lost a hard-fought game to the Dillon Beavers on Friday night 58-48, which sent the Beavers to the divisional tournament final, and secured the Beavers a spot in the state tournament.

Results from around the state on Thursday.

Both the Beavers and the Pirates will appear in the state tournament, but Saturday's victory entitled the Beavers to a number one seed.

Check out how the teams did in the regular season.

The contests start with a single game Tuesday, and another game will be played on Wednesday. On Thursday, 13 games are scheduled, and one is on Friday.

Egan Lester corrals the ball near the sideline Monday night during Butte Central's victory over Stevensville at the Maroon Activity Center.

Bryson Sestrich drives to the hoop for a layup Monday night in Butte.