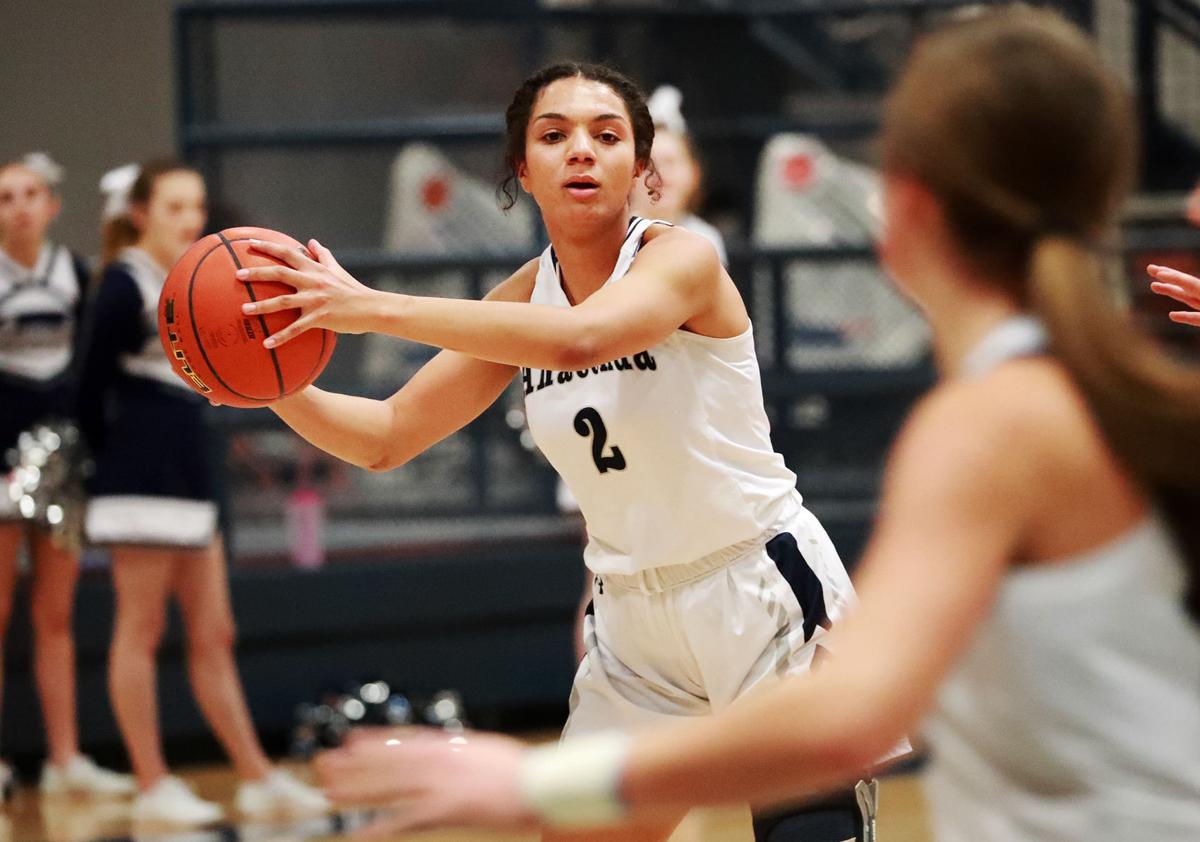 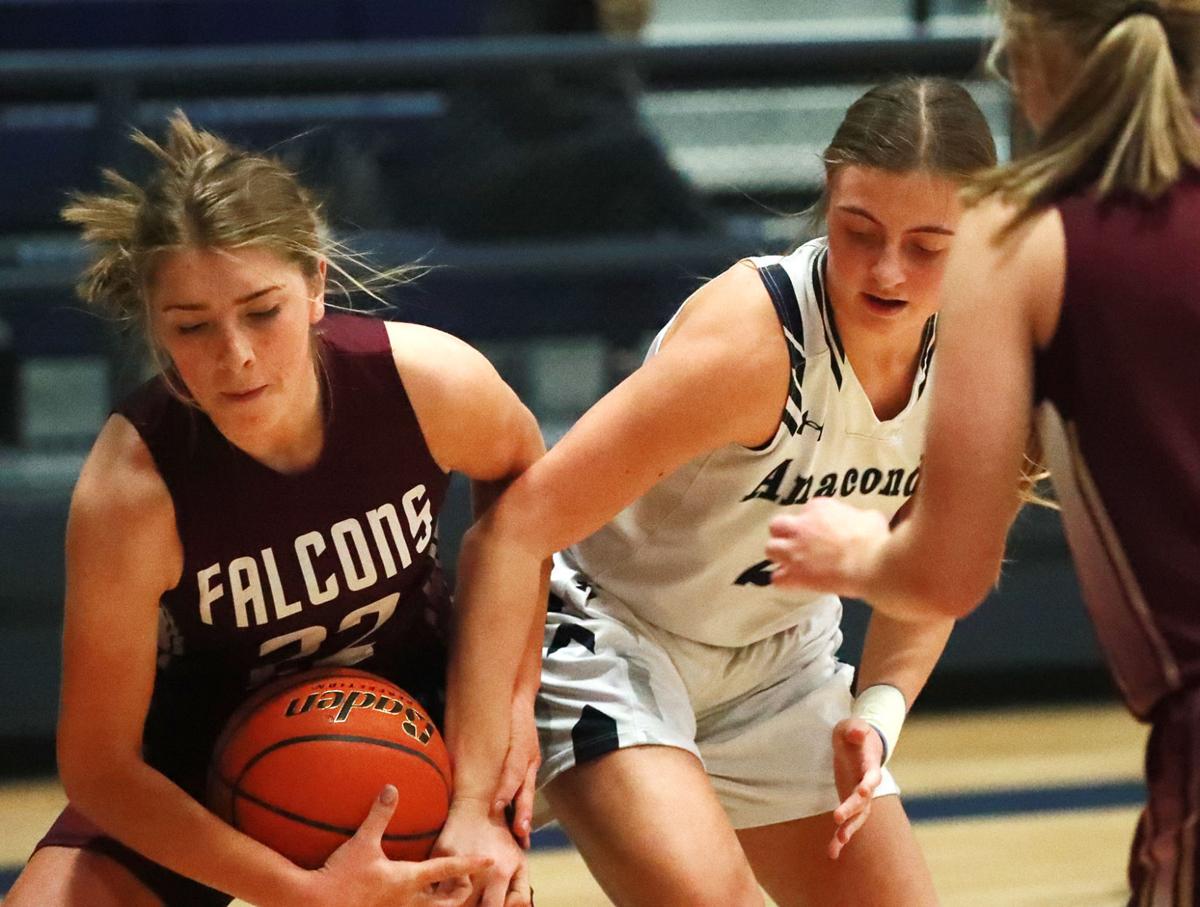 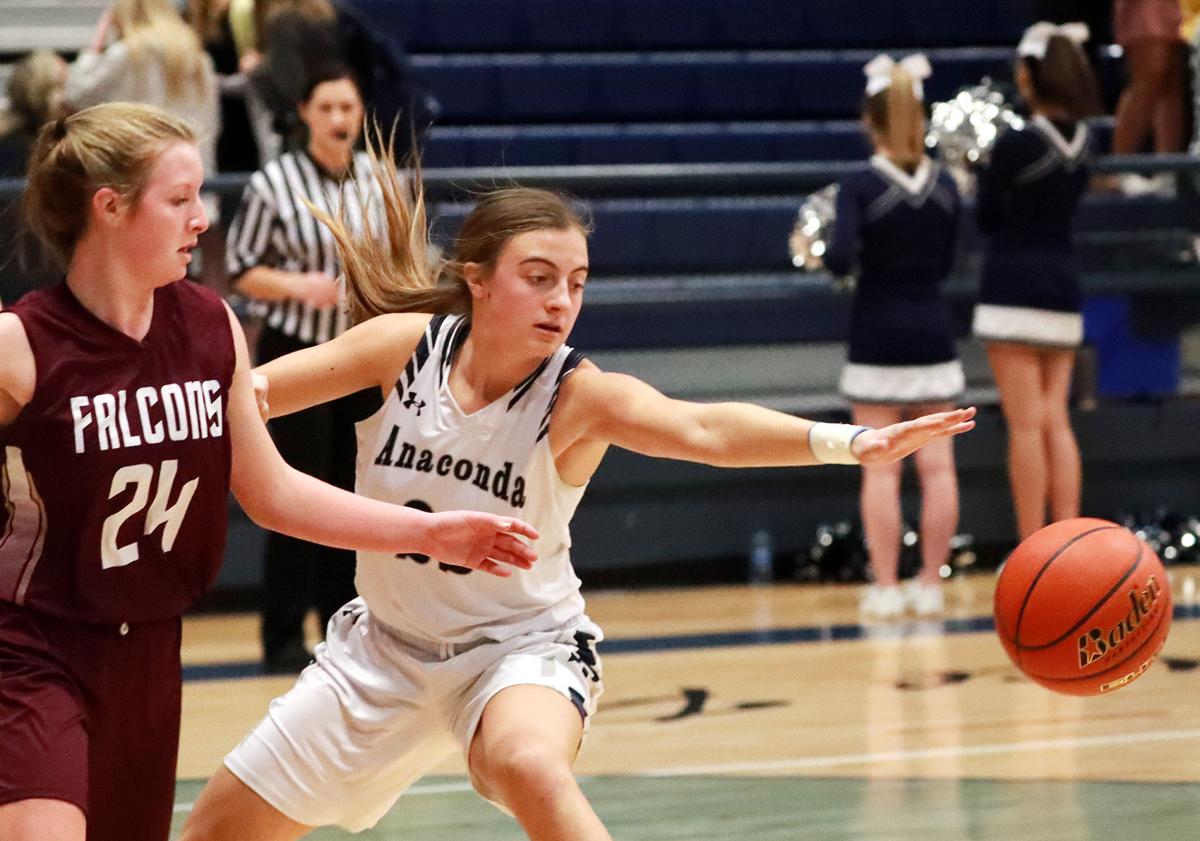 Anaconda's Makena Patrick and Florence's Josie Lewis scramble for a loose ball on Tuesday in Anaconda. 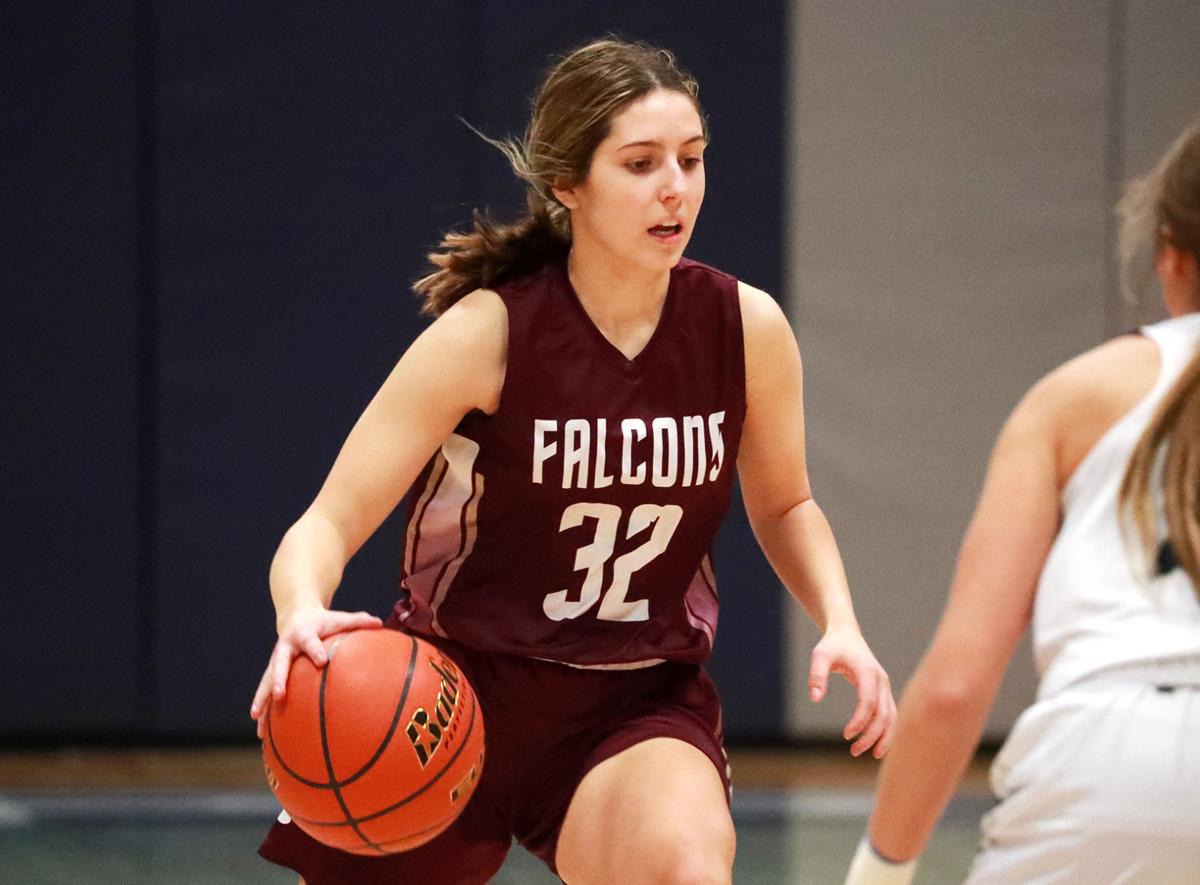 Florence's Kelsen Zahn dribbles during the Tuesday night game against the Anaconda Copperheads in Anaconda.

ANACONDA — The Florence Falcons traveled to Anaconda on Tuesday where they lost to the Copperheads 64-37. While the final result was only pleasant for Copperheads fans, Tuesday's game hosted an array of off-court adrenaline, including a special moment for Anaconda senior Mia Sullivan-Sanders.

As the lights dimmed and the socially-distanced crowd rose to their feet, Sullivan-Sanders sang the national anthem before her team hit the floor. She then got into early foul trouble in the first quarter, but would go on to score eight points for the Copperheads.

"It was really nerve-wracking because I was nervous about both the game and the anthem," Sullivan-Sanders said. "When people are watching, you got to put on a show. But at some point you have to let it drop and do your best."

Sullivan-Sanders said she was asked to sing the anthem during her orchestra class and was hesitant at first. After the successful anthem and play on the floor, said she was proud of her team because it has felt like family.

Anaconda started the game in rhythm and held an 18-9 lead after one quarter. The Falcons were able to keep it close in the first quarter, as they got to the free throw line frequently. But their poor percentage from the line proved detrimental.

The Falcons were not entirely to blame for their free throw woes, though. Each trip to the line was met with an obnoxious screech from an Anaconda student in the otherwise heckle-free crowd. This visibly altered at least six free throw attempts for the Falcons.

"It's always good to play a game in The Snake Pit, there's always an advantage of playing in this building," Anaconda head coach Andy Saltenberger said. "Our crowd is always good and our girls seem to work harder here. With this year it's been unique, and at this point we're going to work on a few things."

The Copperheads entered the third quarter with a comfortable 17-point lead over the Falcons. But Kasidy Yeoman (Florence) did not allow her team to go down without a valiant effort, scoring 14 points in the game.

As ball security and defensive patience improved for the Copperheads, the scoring differential increased as well. This was do to halftime adjustments, according to Saltenberger.

"Well we were just sloppy in the first quarter and the first half, we weren't taking care of the ball so we slowed things down," Saltenberger said. "We had to clean things up and the girls started having more patience. Our rebounding and defense are keys to our stuff, it's all work ethic."

In the closing seconds of the game, The Snake Pit went silent after Falcons' freshman Lexi Perez hit the floor hard after jumping for a rebound. She held her head and remained motionless for about five minutes. She then walked off the court with a neck brace to a resounding applause.

Yeoman was the only Falcon to score in double figures, but had help from Trista Williams and Kylie Kovatch who both finished with six. Josie Lewis finished with five and Kolbi Wood added four to the Falcons' total. Florence will travel to Corvallis on Thursday for a game set to tip-off at 7 p.m..

Megan Reich was the leading scorer for the Copperheads and finished with 14 points. Alyssa Peterson also contributed with nine points, and Sami Johnson had eight. Anaconda's next game will be against Philipsburg next Tuesday, as the Copperheads look to remain undefeated.

"We're just keeping a good mindset and a good attitude," said Sullivan-Sanders. "All my friends who play and all the fans, we're such a close community and everybody's just their for each other, it just makes you feel welcomed."

A look at the scoring from around the state in boys and girls high school basketball.

Anaconda's Makena Patrick and Florence's Josie Lewis scramble for a loose ball on Tuesday in Anaconda.

Florence's Kelsen Zahn dribbles during the Tuesday night game against the Anaconda Copperheads in Anaconda.