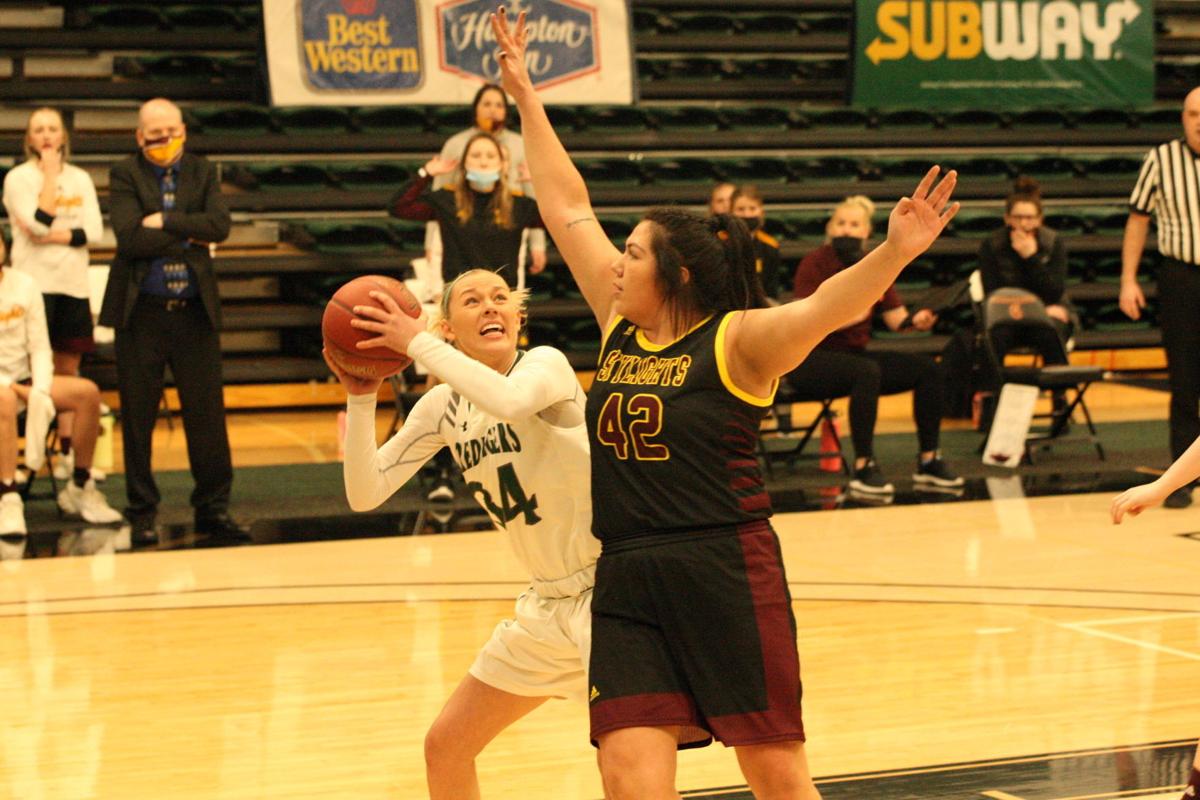 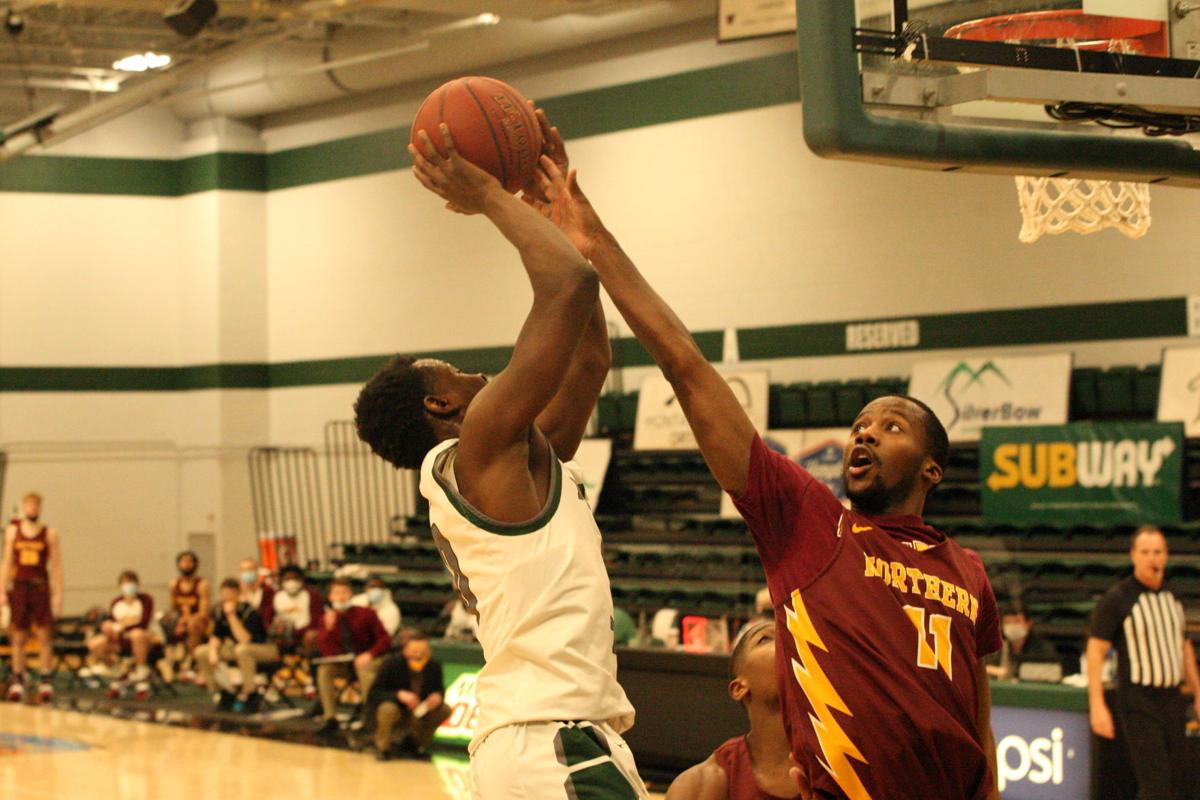 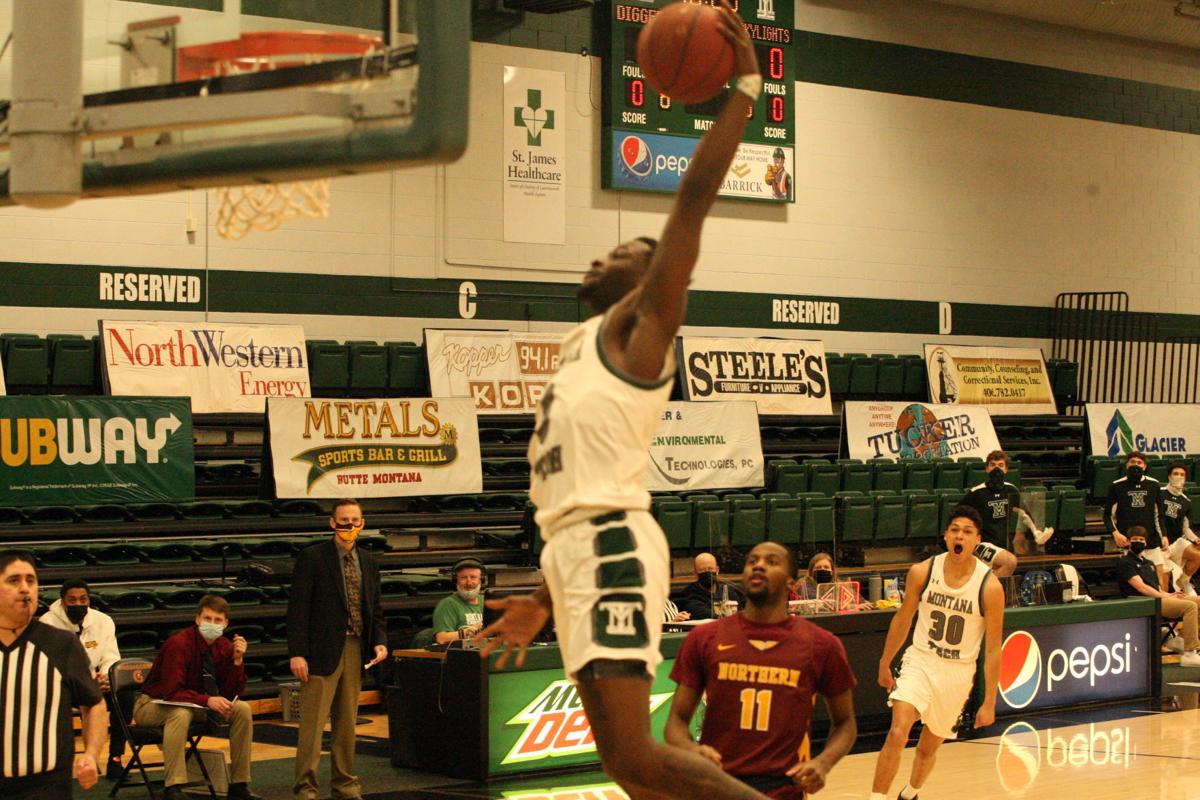 Sindou Diallo dunks against MSU Northern on Feb. 20 in Butte. 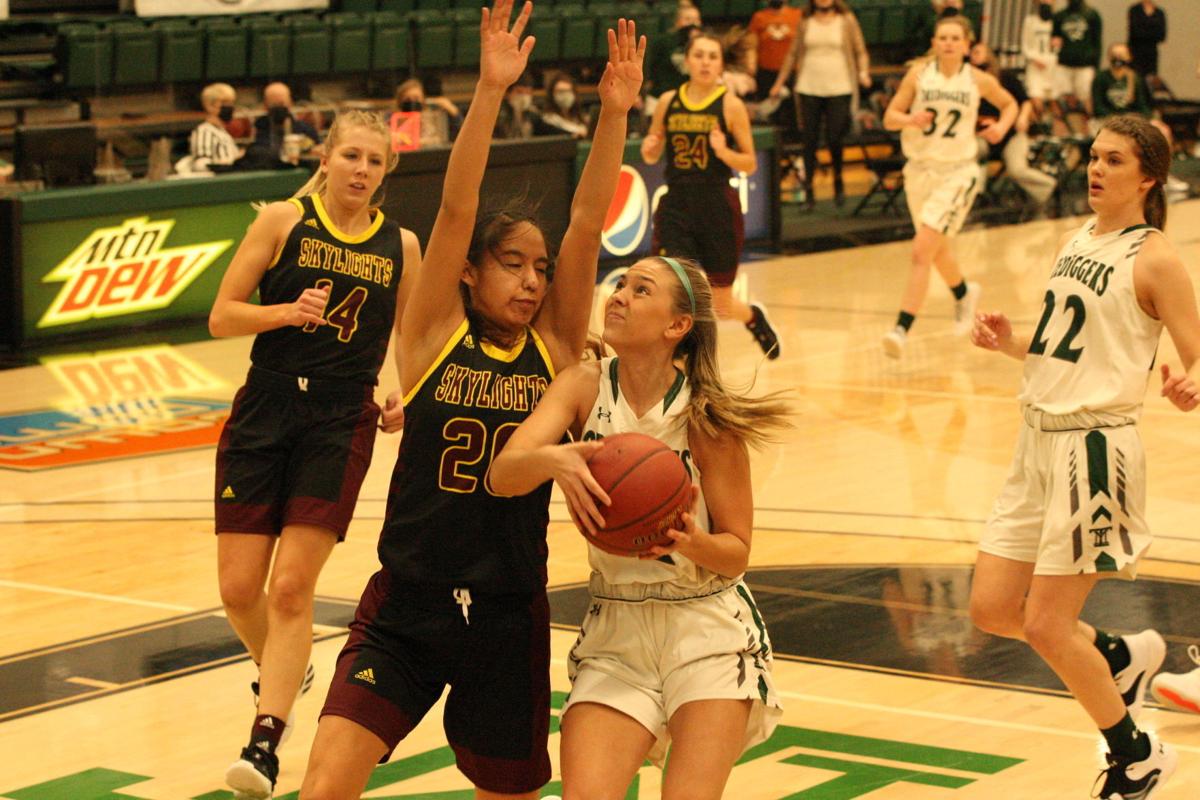 BUTTE — Kelvin Sampson Court was a busy venue Saturday, where both Montana Tech basketball teams took the floor after the volleyball team’s 3-2 win over Montana Western earlier in the day.

With two games slated against MSU Northern this weekend, the women’s team looked to snap a seven-game losing streak to close out the regular season. The Orediggers and Skylights have been scheduled to meet in the first round of the Frontier Conference tournament, with this weekend’s results determining home-court advantage.

"It's been such a weird year with COVID, it's emotional with our two seniors," Montana tech women's basketball coach Carly Sanon said. "It's been a tough year and at times we've been fatigued, but sometimes there's not much you can do."

The Orediggers men’s team also had two games against MSU Northern scheduled to close their season, which has been more fruitful than the women’s. The Orediggers would have to win both games this weekend and rely on two losses by second-seed Carroll College to receive a first-round bye in the conference tournament.

Despite a valiant comeback effort, the Orediggers women fell to the MSU Northern Skylights 64-57 and surrendered home-court advantage in the Frontier Conference tournament with the loss.

After two weeks of quarantine precautions, Montana Tech women’s basketball coach Carly Sanon said the team only had two practices before Saturday’s game, which could have played part in their loss.

The back-and-fourth game saw the Skylights and Orediggers tied at 16 after one quarter. Neither team held more than a four-point lead in the first quarter, until the Skylights’ Allix Goldhahn drained a three-pointer in the second quarter, giving the Skylights a six-point lead.

Both teams ran a zone defense in the first half. The Skylights had a size advantage in the paint through Cameron Mooney and Tiara Gilham. While Madison Allen, Dani Urick and Mesa Williams all hit three-pointers, the Orediggers shot a meager 25% from range in the first half.

The Skylights pulled away in the second quarter, where they led 39-28 at halftime. MSU Northern’s Peyton Kehr was proved hard to stop, scoring 14 points in the first half.

"We need to work on not fouling and letting them get to the rim, we have to find some momentum," said Sanon.

As the Skylights stretched their lead to as much as 18 in the third quarter, the Orediggers brought a full-court press in hopes to force turnovers. The pressure defense proved worthwhile, as the Orediggers trimmed the Skylights’ lead to 12 going into the fourth quarter.

Williams led the Orediggers in scoring with 18 points. Urick also had a solid outing with 12 and Aubrie Rademacher scored eight points.

After trailing for almost the entire game, the Montana Tech men beat the MSU Northern Skylights 65-64 after making a clutch stop in the game's final seconds on Saturday.

Much like the women’s game, the Orediggers and Skylights struggled to get separation on the scoreboard early on. A close game did not deter Sindou Diallo from making a highlight play just as the game began, though.

Trailing by two in the opening two minutes, the Orediggers came up with a steal that led to an outlet pass to Diallo. While an MSU Northern defender was close by, he chose not to contest as Diallo finished the play with a one-handed dunk.

"Getting to the rim and playing for the better shot really helped us down the stretch, it put a little game pressure on them and we got some stops," said Hiatt.

The highlight dunk may have ignited Diallo on offense, but the Orediggers struggled to score otherwise and gave up five first half three-pointers. Both teams got into foul trouble early, with the Orediggers entering the bonus halfway through the first half.

The Orediggers trailed 31-27 at halftime and shot 0% from three-point range in the first half. The rebounding numbers were identical between both teams going into the second period.

"This team gives us more problems than anyone else in the league," said Hiatt. "They suppress possessions and walk it up the floor, they want to minimize our attempts at the basket."

The game remained tight to begin the second half, but the Skylights held a slight edge through most of the half. The Orediggers got to the line more often in the second, and their scoring was diversified when Derrius Collins began making plays at the ten-minute mark.

With just under ten minutes remaining, a Sindou Diallo layup in traffic gave the Orediggers a 46-45 lead. It was their first lead since early in the first half.

A glaring difference between halves was the Orediggers’ determination to take the ball inside. After shooting 47% from the field in the first half, the Orediggers shot an improved 58% in the second and got to the free throw line 11 times, compared to eight times in the first.

"We can't beat a team with one or two guys, everybody has to step up," Hiatt said. "We got frustrated and took some rushed shots which plays into their hands, but we did a better job getting good shots in the second half."

Just before the three-minute mark, Taylor England converted an and-one to give the Orediggers a 61-60 lead. This was a relief for England, as he had missed a pair of free throws earlier in the second half.

The Orediggers held a one-point lead with six seconds remaining in the game. Thanks to a tremendous defensive play by Derrius Collins, MSU Northern was unable to make their last shot to win the game.

"Derrius Collins made that big play down the stretch, I believe he is defensive player of the year in our league," Hiatt said. "He's got great hands, he makes steals and he's just a phenomenal talent. There's no greater example of his influence on our team than that final possession tonight."

The Orediggers are now 12-9, 12-7 in the Frontier Conference. The men's team will play at home against MSU Northern again on Sunday at 4 p.m. The women's teams will play at 2 p.m.

Watch Now: A tour of the Montana Pro Rodeo Hall & Wall of Fame

The Orediggers star has big plans for next season and beyond

Sindou Diallo dunks against MSU Northern on Feb. 20 in Butte.