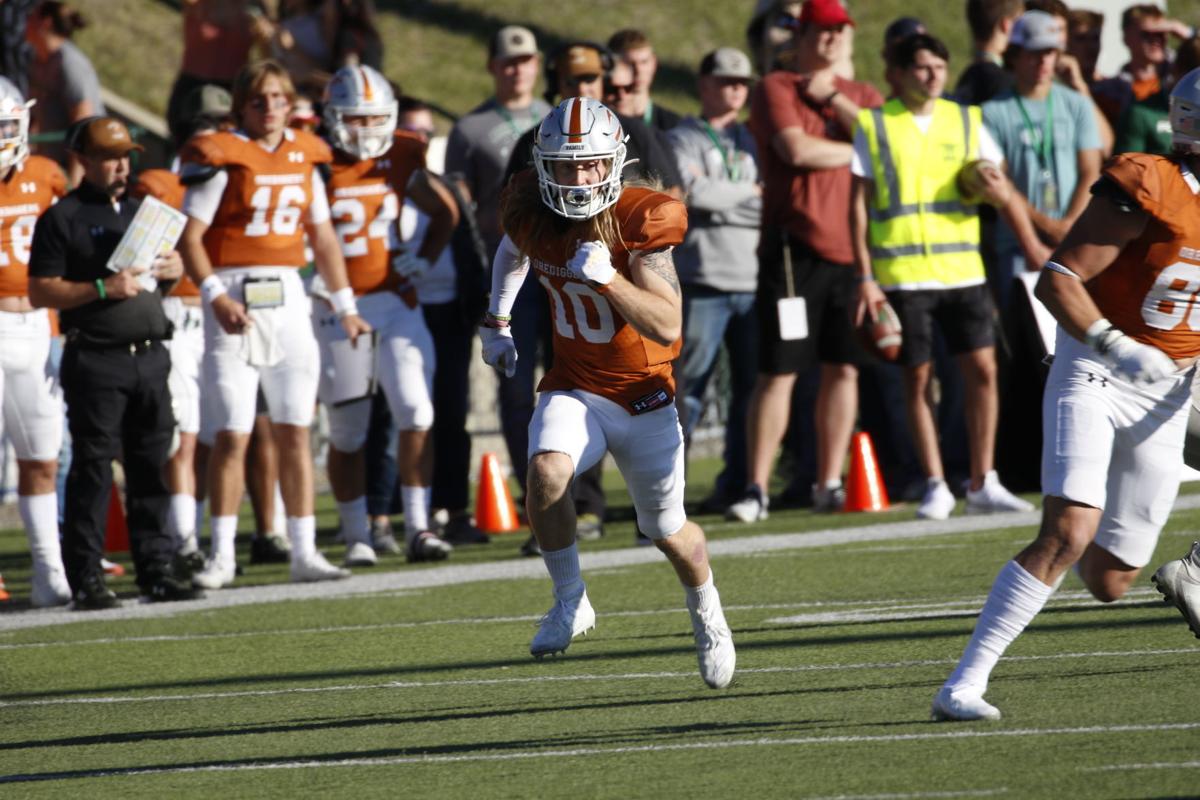 Kiley Caprara running a route in the game against Eastern Oregon this season. 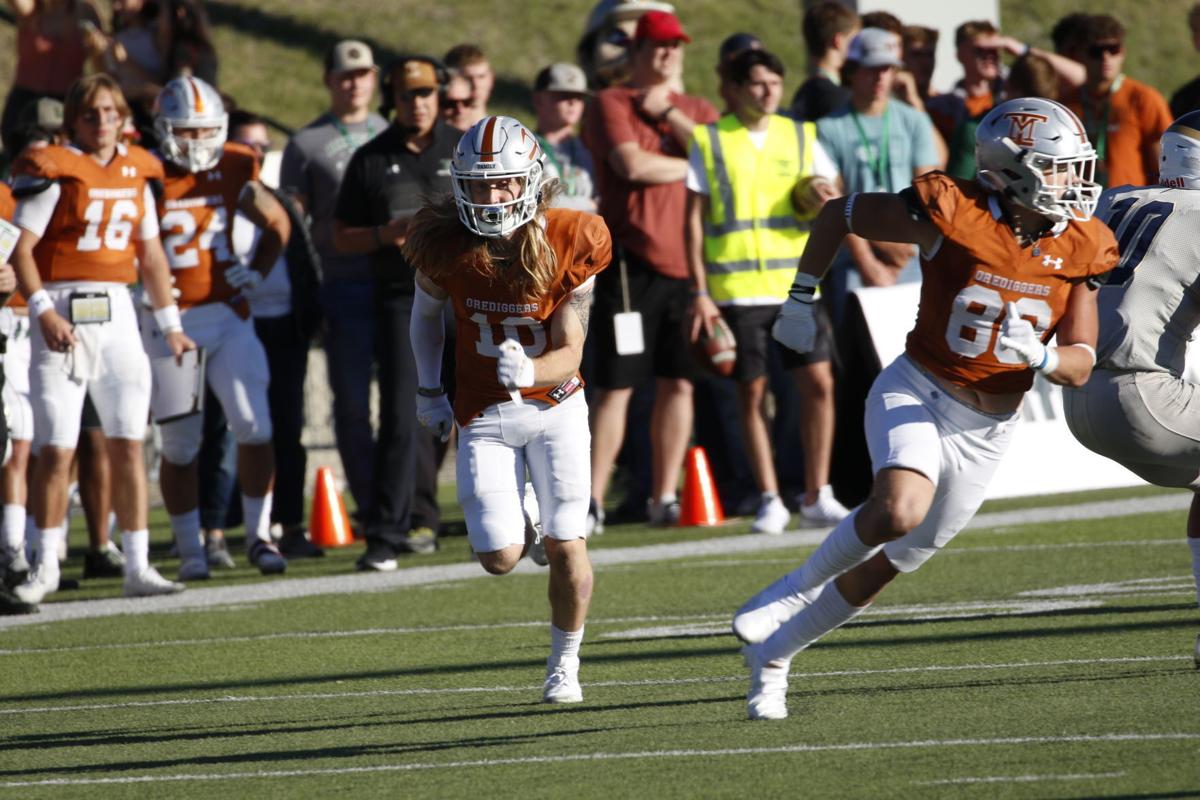 Kiley Caprara running a route in a game against Eastern Oregon this season. 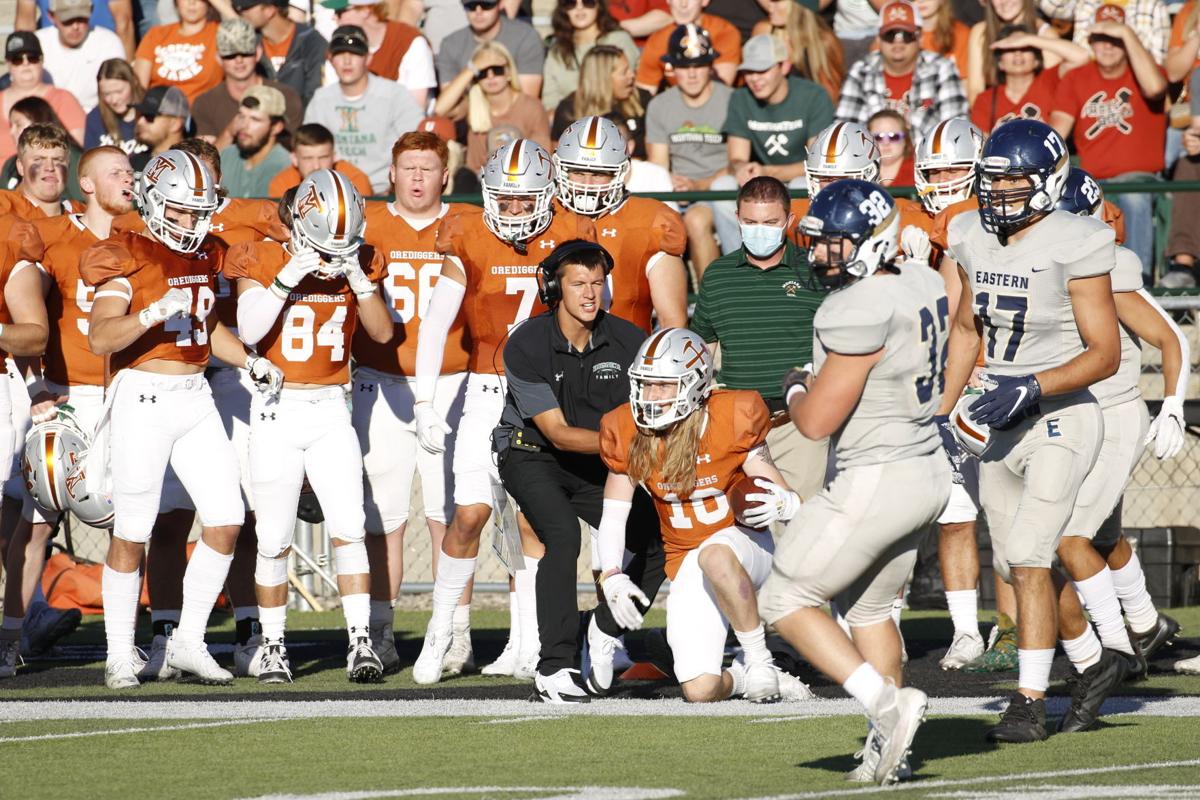 Kiley Caprara kneeling during this year's game against Eastern Oregon.

BUTTE — Listed at 5-foot-10 and 175 pounds, Butte native Kiley Caprara often wondered if his size would deter his football dreams. Now a redshirt junior, Caprara will be a key receiver for Montana Tech this Saturday.

Caprara and the Orediggers will travel to Billings for Saturday's game against Rocky Mountain College at 1 p.m. Rocky (2-0) will look to remain undefeated while Montana Tech (0-2) is still searching for its first win of the season.

"The past bye week really helped us focus on getting better before our game against Rocky," Montana Tech coach Kyle Samson said. "Rocky is a talented team that starts with their quarterback. We have to take care of the football and win the turnover battle, we have to start faster."

For Caprara, Saturday will be another challenge he has been determined to conquer. But his determination to succeed on the football field began as a teenager in Butte, long before his Montana Tech career.

Caprara realized he wanted to play college football in seventh grade. He then played receiver at Butte High, where he earned first-team All-State honors as a senior and tied the school record for receptions (76).

"Playing in Butte was honestly something I loved, it was a lot different than playing in any other place in Montana," Caprara said. "It always felt like what we were doing on Friday night was the biggest thing going, everyone was tuned in."

Despite his high school accolades though, Caprara struggled to find a collegiate home. Weighing just 135 pounds as a 5-foot-7 wide receiver, Caprara did not receive any offers to play college football once he graduated from Butte High.

Yet he remained determined to continue his football career. He received a call one day from former Montana Tech coach Chuck Morrell, which was the same day he signed to play football with the Orediggers.

"Tech asked me to come in one day and coach Morrell convinced me," Caprara said. "No scholarship, no money but I committed that day. I just wanted to play for my hometown."

After redshirting his first season, Caprara saw very little playing time in 2018 under Morrell. In 2019 though, he gained more than 40 pounds and started nine games for the Orediggers.

He grabbed 23 passes for 357 yards in 2019 and was recognized by the Frontier Conference as academic all-conference. His success continued and his future looked bright as Samson took over head coaching duties after the 2019 season.

"The coaching change didn't effect me that much, outside of me and coach Samson finding a really good connection," Caprara said. "He was one of those guys who didn't look down on guys with smaller builds. He gives them the opportunity and I proved myself."

Samson, who could have once been seen as an undersized player himself, was an all-state quarterback at Helena Capital and was named the Frontier Conference Offensive Player of the Year in 2006 during his time at MSU-Northern.

Caprara was signed before Samson became head coach, but Samson has noticed the skill, work and focus Caprara put into his game.

"He's not the biggest kid but he's extremely tough," Samson said. "Having a local kid from Butte on our team has made a huge impact, he's just an absolute pleasure to coach."

As the pandemic created uncertainty regarding when the Orediggers would return to the field, Caprara continued to train for the upcoming season, no matter when that season's kickoff would be determined.

Weeks before Caprara learned that Montana Tech would not participate in the spring season, he ran into one of the biggest obstacles of his career; a broken collarbone.

"We finally got to do some football activities but then I snapped my collarbone and had to get surgery," Caprara said. "But I had to push through it just like everyone else in football. It was nothing someone can't overcome."

Caprara had worked to gain weight since coming to Montana Tech, but lost roughly 15 pounds during the first month of his injury recovery. The loss of weight was the first concern he noticed during the grueling recovery process.

After surgery and months of rehabilitation, Caprara returned to football activities before the 2021 season. He regained weight and was near 100% for the season-opener against Eastern Oregon, where he caught five passes for 46 yards.

"My motivation to come back was my love for the game. A lot of people don't love the game like I do, I never want to stop playing," Caprara said. "I want to play for the rest of my life, I want to go even farther than college. When I look at everyday life, I just want to play football."

While personal goals have driven Caprara to the level he has reached, his goal for the season is for the team to improve in all areas. Despite the rough 0-2 start, he believes Montana Tech could turn the season around and compete for a Frontier Conference championship.

Having a team-based goal comes naturally within the Montana Tech program according to Caprara. Samson's family approach to team chemistry has built an experience Caprara said he will always remember.

"The culture is pure family, we bleed it," Caprara said. "We lost the first two games but we lost them as a family. The family aspect of our team is the biggest aspect, I'm best friends with the whole team. It's just a family."

Caprara said he wants to continue playing football after college. He said his size may be a challenge, but not one he is not willing to take on.

"Really I just want to continue having a happy life and doing whatever it takes to get there," Caprara said.

Heartbreaker in Butte: Montana Tech football falls to College of Idaho in Hall of Fame Game

Montana Tech lost to College of Idaho 28-23 on Saturday in the annual Hall of Fame Game.

Montana Tech Orediggers bounce back with win over MSU-Northern

BUTTE — The Orediggers came back from a tough rivalry game loss to Montana Western last week with a 23-13 win over MSU-Northern in Havre on Saturday.

Kiley Caprara running a route in the game against Eastern Oregon this season.

Kiley Caprara running a route in a game against Eastern Oregon this season.

Kiley Caprara kneeling during this year's game against Eastern Oregon.