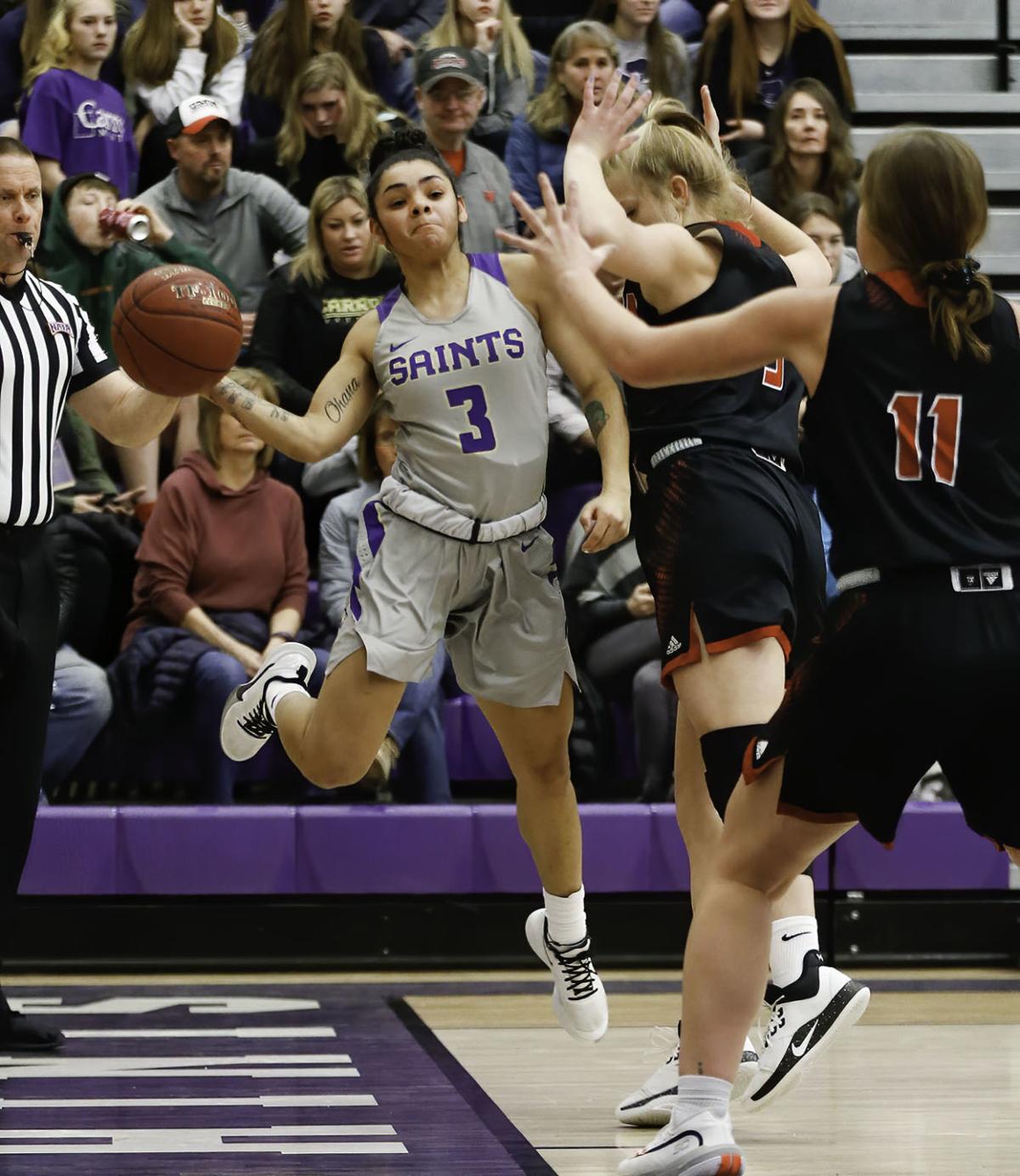 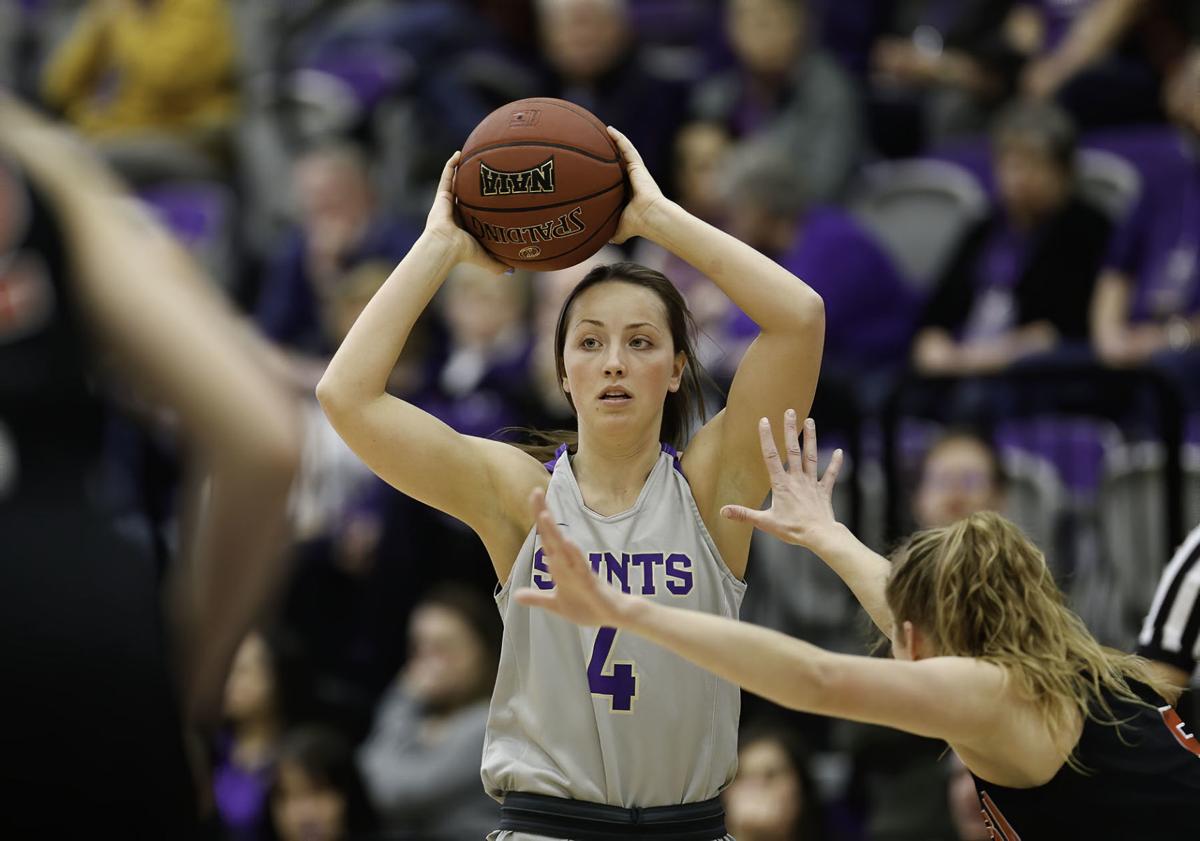 Carroll’s Danielle Wagner looks for an open lane during the first quarter of Friday night's game against Western in Helena.

Before Friday night against Montana Western, the Saints only had four games with ten or more 3-pointers.

Her team showed why as they made a season-high 14 3-pointers and came away with an 80-77 win over the Bulldogs at the PE Center.

“We have great shooters, and I think we are a little bit contagious,” Sayers said. “When we get rolling it can be a very positive outcome.”

Carroll didn’t come into the game shooting great behind the 3-point arc.

The Saints were near the bottom of the Frontier Conference, making just 30 percent of their shots.

But that didn’t stop them from letting it fly from distance.

The Saints saw themselves down early after the Bulldogs scored their first three baskets, but junior forward Christine Denny pulled up from the top of the key and banked in the team’s first 3-pointer.

Danielle Wagner also got involved with a 3-point make from the wing, but Montana Western answered right away.

Carroll kept fighting and putting up 3-pointers, finally taking the lead when Taylor Salonen hit a 3-pointer in the corner.

Salonen has been more of an inside threat in her career, but has found the ability to shoot from the perimeter when needed.

“I used to be a guard in high school,” said Salonen, who finished with 10 points that included a pair of 3-pointers. “I have always liked to shoot it.”

Though the Saints took the lead, Montana Western stayed in the game, making eight of its first 10 shots from the field.

Despite what Carroll could muster, the game was tied 19-19 at the end of the first quarter.

The 3-point barrage continued from both teams in the second quarter.

Whether it was Helena native Savanna Bignell hitting a shot, or point guard Shannon Worster driving to the basket, the Saints lead never got higher than four points.

Carroll made a season-high eight 3-pointers in the half, but was looking at a 36-34 halftime lead after Montana Western was shooting a scorching 70 percent from the field.

“We had to battle, but we have learned that is what we have to do,” Sayers said.

The Saints were coming off a struggle in Billings, where they squeaked out a two-point win over Rocky Mountain. In the game prior, they fought back to overcome a 15-point deficit against Providence.

“Our rebounding and hustle plays really help us get us over the hump,” Sayers said.

During the second half, Montana Western’s hot shooting became to cool down.

But so did Carroll’s.

The Saints finally reignited their offense with a trio of 3-pointers led by Kamden Hilborn.

“We didn’t do a good job covering their shooters,” Wooley said. “If you leave good shooters open, they are going to make them.”

Carroll finally started to create some distance from the Bulldogs after Salonen hit her second 3-pointer midway through the second half.

Right on cue, Montana Western rallied, but the combination of Wagner and Christine Denny was too much to overcome.

Carroll receives a much needed break after playing a pair of games in three days and will travel to Montana State Northern next Wednesday.

Montana Western continues the funky Frontier Conference schedule as it has to race back to Dillon to face Rocky Mountain Saturday night.

Ryan Kuhn covers Carroll College athletics for the Independent Record and 406mtsports.com. Email him at ryan.kuhn@406mtsports.com or follow him on Twitter at @rskuhn

BUTTE — Carroll head coach Rachelle Sayers said that Maddie Geritz’s mom is riding the bus for the rest of the season.

Montana Tech breaks away in second half to fend off Carroll

Montana Tech put it together in the final ten minutes Tuesday.

BUTTE — Carroll head coach Rachelle Sayers said that Maddie Geritz’s mom is riding the bus for the rest of the season.

The Carroll College women’s basketball team’s shooting woes are over. It just needed a game at home against Montana Tech.

Carroll’s Danielle Wagner looks for an open lane during the first quarter of Friday night's game against Western in Helena.