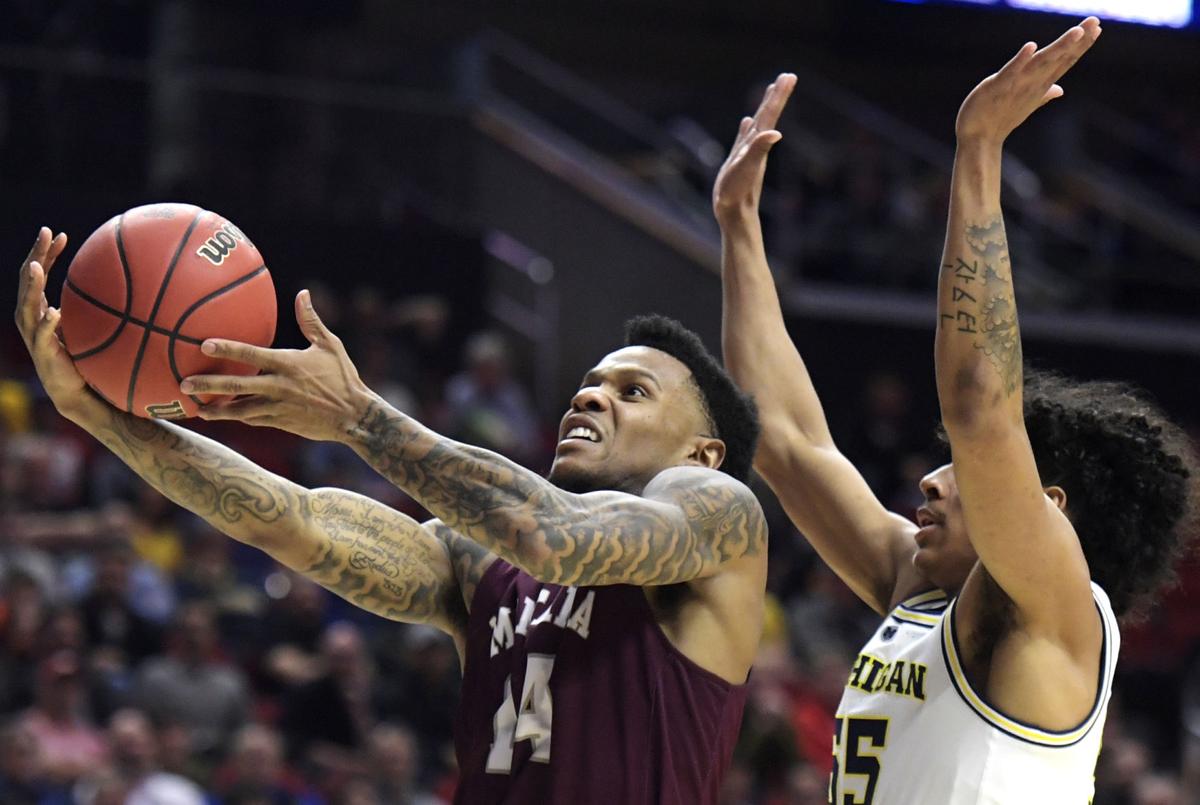 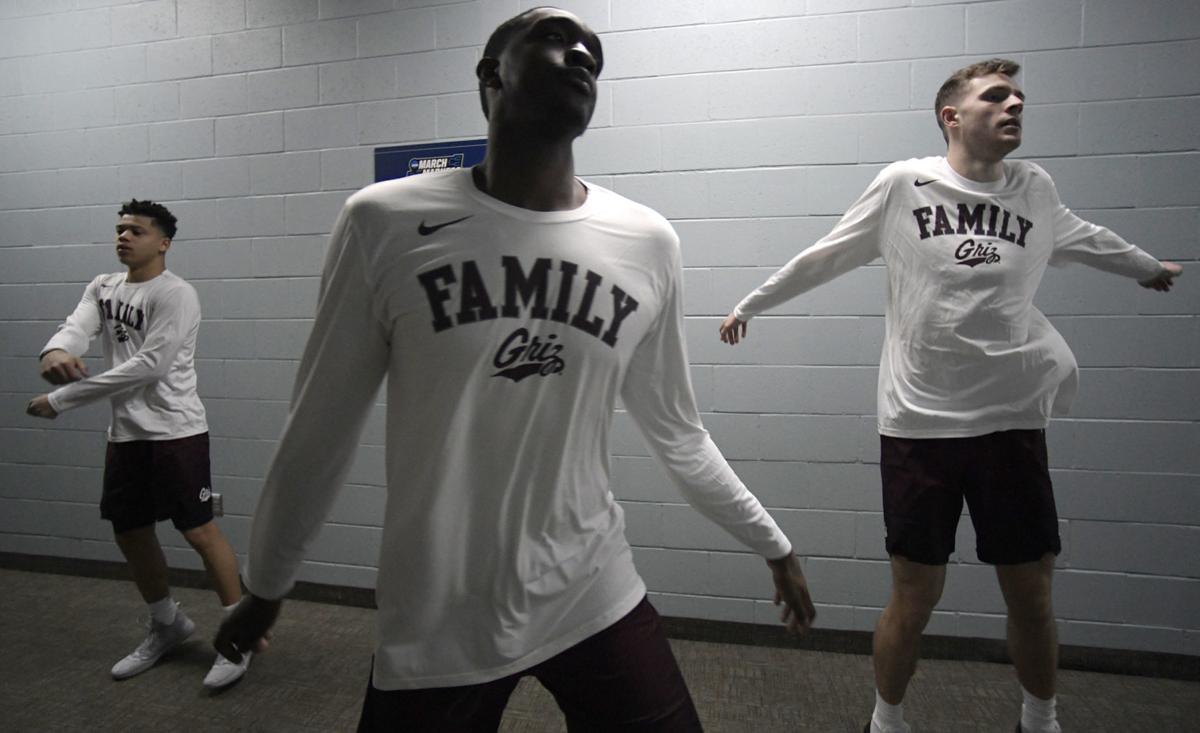 Montana's Donaven Dorsey, center, warms up with Mack Anderson, right, and Freddy Brown III, left, in the hallway near the Montana locker room at the Wells Fargo Arena in Des Moines, Iowa, on Thursday. 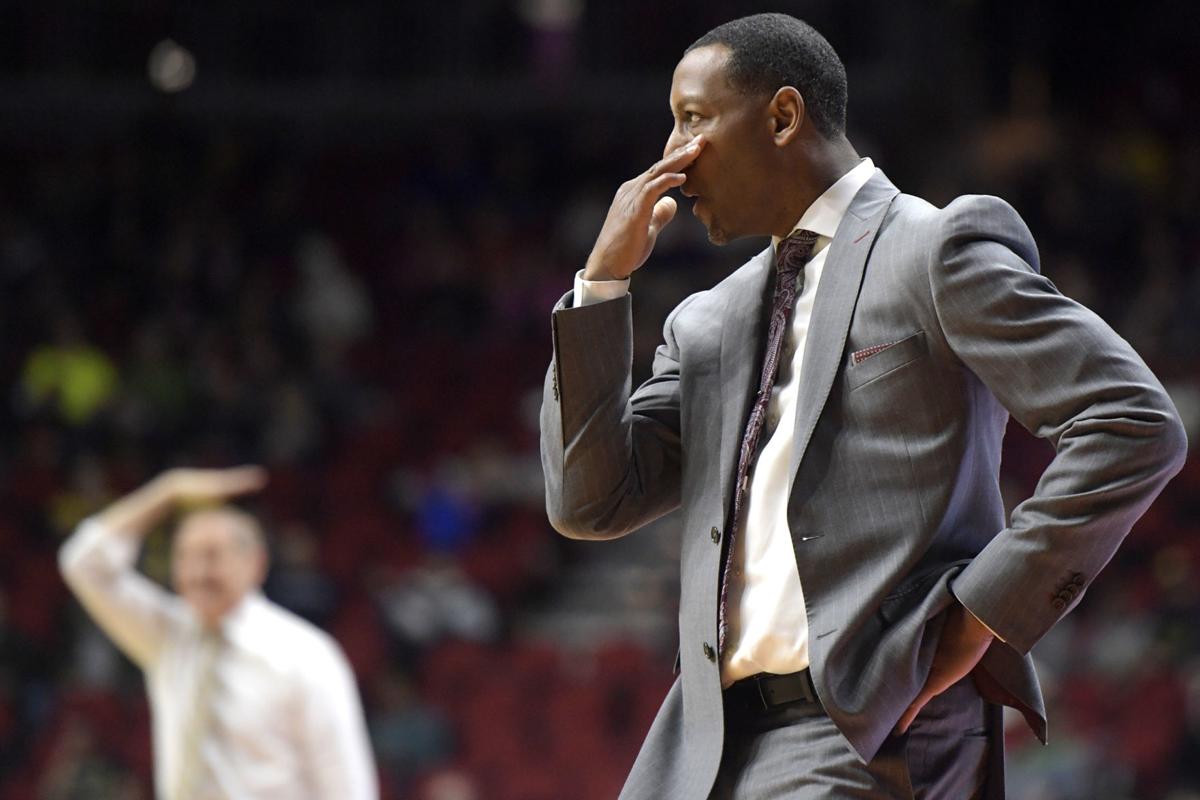 Montana head coach Travis DeCuire looks on in the second half against Michigan in the first round of the NCAA Tournament at the Wells Fargo Arena in Des Moines, Iowa, on Thursday.

DES MOINES, Iowa — You see it every year in March Madness.

One team has the game well in hand in the waning minutes of a game so both coaches begin to empty the benches. The winner does so to preserve energy for the next round of the NCAA Tournament, the loser as a way to send its starters and seniors off into the sunset with one more ovation from the fans.

When Ahmaad Rorie, Michael Oguine and Bobby Moorehead were subbed out for the final time as Grizzlies on Thursday night at the Wells Fargo Arena in a 74-55 loss to Michigan, emotions were high and the embraces long as Montana bid farewell to three seniors who rewrote the record books and put UM back in the Big Dance in back-to-back seasons for the first time since 2012 and 2013.

There’s Rorie, who found a home at Montana after one year at Oregon, and will end his career as the sixth-leading scorer in Montana history with 1,654 points, and the only player to reach 1,500 in three seasons. Thursday's game was his 100th as a Griz.

There’s Oguine, Montana’s fearless 6-foot-2 guard who jumped at the tip against Michigan’s 7-1 Jon Teske. A star almost since the minute he stepped on campus, Oguine ranks just behind Rorie at No. 7 on the scoring list with 1,647 points. He has started in 123 of the 127 games he has played in.

There’s Moorehead, the headband-wearing defensive specialist who broke the school record for career games as a Grizzly with 134 once he stepped on the court Thursday evening.

All three started in every game they played over the last two seasons as Montana racked up 52 wins, a program-best over a two-year span. Attendance at home games averaged 4,234, the highest it has been since 2012-2013.

“When I came here I was complacent,” an emotional Rorie said when asked how he wanted to be remembered. “I didn’t have good study habits, basketball habits, and Trav (DeCuire), all I can do is thank him, honestly. He pulled me in when I was a sophomore and told me from the jump it’s all about your reputation.

“I was kind of a guy that didn’t care about reputation. Just wanted to play basketball. Didn’t care about school, but I think I’ve improved in that regard. Graduated, got a degree and working on another one in media arts. The kind of guy who improved off the court and now basketball-wise I feel like I’ve grown as a leader.”

They will be the first to tell you they didn’t want the season to end this way. But they’re leaving the program better than they found it and have thrust Montana right back into the discussion to win the Big Sky Conference every year.

“I’m especially proud of these last two years, but my four years have been probably the best four years of my life,” Moorehead said. “Getting to know everybody in this town and the community is just amazing and winning a lot of games was awesome.

“I’m super proud of this program. I’m a better kid than I was when I got here and that’s because of this coaching staff and the people around me. It’s just been an unbelievable experience.”

Expectations were through the roof for Montana this year and the road was far from easy and smooth. Injuries plagued Montana more often than a year ago. The non-conference slate was difficult with the Grizzlies playing less than 100 percent each time.

After beginning the conference season with surprising losses to Portland State at home and at Eastern Washington, the sky appeared to be falling. But the Grizzlies responded by winning 10 in a row, ended up winning the regular-season title and the conference tournament, despite missing redshirt senior Jamar Akoh for 20 total games this season, a player who was well on his way to the conference player of the year award had he stayed healthy. He was lost for good when he injured his knee against Idaho on Feb. 7.

But through all of the adversity of injuries, lineup changes, etc., Montana emerged once again as the face of the Big Sky in March.

In his fifth year at the helm, this might be DeCuire’s finest season of coaching in guiding Montana back to the tournament after losing a player of Akoh’s impact for so long.

DeCuire’s name has swirled as a possible candidate among many larger colleges over the past two seasons, but those whispers will undoubtedly become louder this offseason, especially when you consider that a Pac-12 school just four hours to the west in Pullman, Washington, is now looking for a new head coach and a revitalization of a program that hasn’t been to the NCAA Tournament since 2008.

But for now, despite the disappointing end, DeCuire’s words were of the highest praise for the seniors who played for him one final time.

“There have been a lot of good senior classes, so if you compare them basketball-wise, it’s argumentative,” DeCuire began. “But for my group, we were about more than just basketball. We’ve been fortunate to have a 100 percent graduation rate. None of our guys have gotten in trouble off the court. You don’t read negative things about our team, our guys.”

He continued, “So with the consistency that these guys have had for four, five years as seniors in this program, I think their legacy is that they’re the best senior class in the history of Montana basketball because of what they represent and how they represent it.”

Montana undoubtedly loses a lot of talent from this year’s squad but the Grizzlies won’t go anywhere and will return plenty of experience for the 2019-2020 campaign.

Here is a way-too-early look at what next year’s team will look like:

Breakdown: The Grizzlies return a strong core of veterans with experience next season who will be tasked with sliding into the starting roles left behind by the seniors who firmly held those spots over the past two seasons.

The status of Dorsey is the most intriguing aspect to Montana’s roster. Though listed as a redshirt senior, Dorsey has played only three seasons. He spent two years at Washington before transferring to Montana. He sat out one year due to transfer rules then missed a second year due to surgery. He gradually worked his way into the lineup but began thriving down the stretch as a deep threat with size. If he is granted a sixth year of eligibility, a full offseason of good health could have Dorsey firing right out of the gates next year.

Dorsey told 406mtsports.com at the beginning of the year his plan was to try for a medical waiver after the season is over to try and get a sixth year of eligibility. And when asked after Thursday’s loss about his future, Dorsey said, “Whatever happens, happens, to be honest. We’ll figure it out.”

Retaining him would be a boost for the Griz and would keep them in the preseason favorite competition alongside Eastern Washington and Weber State.

Pridgett will be a conference player of the year candidate next season. He broke out this year after cracking the starting lineup and was named first-team All-Big Sky. Pridgett played in every game and led the Griz in scoring with 15.1 points per game on 60.5 percent shooting.

The backcourt of Falls and Manuel is intriguing. Falls played some of the best basketball of his career of late and helped propel Montana to the regular-season title as a starter down the stretch. With him running the point, watching him create for one of the team's most consistent deep threats in Manuel, as well as for Pridgett and more, could make for a scary offensive attack next season.

“When I first came here, (the seniors) really helped me a lot with everything,” Falls said. “I think we’ll just use what they taught us. I’m going to be a leader next year so I have to take what they gave me and use it for my other teammates.”

Anderson has shown flashes of what he’s capable of doing in the post for Montana during his true freshman season. Miller and Egun have looked the part in practice and should be ready to slide right into heavy rotation minutes next season. Kramer continues to steadily improve and gives the Grizzlies size down low and Selcuk is newer, but the coaching staff has high hopes for him.

Plus, there is a lot of buzz around Montana’s incoming freshman class of Vazquez, Owens and Carter-Hollinger.

Assuming no one transfers in or out of the program, Dorsey is back and the three incoming freshmen redshirt, here is a best-guess assumption of next year’s rotation, subject to change and criticism, of course.

Next season starts now. Is it October yet?

Kyle Hansen covers Griz men's basketball and more for the Missoulian and 406mtsports.com. Email him at kyle.hansen@406mtsports.com or follow him on Twitter at @khansen406

MISSOULA — In the leadup to Montana's home-opener win over Western Illinois last week, football coach Bobby Hauck reminded his players that many of them hadn't yet experienced the full power of a capacity crowd in Washington-Grizzly Stadium.

MISSOULA — Despite moving to 2-0 with a 35-point win over Western Illinois Saturday, the Montana football team held steady at No. 4 in this week's Stats Perform media poll and No. 5 in the AFCA coaches poll, both released Monday.

Montana Lady Griz get commit from Colorado for 2022-23 season

MISSOULA — Alex Pirog of Colorado announced on Twitter Tuesday that she has verbally committed to play for the Montana women's basketball team starting in the fall of 2022.

BOZEMAN — It didn't take long for the Twitter-verse to react to Montana's stunning 13-7 victory over FBS No. 20 Washington in Seattle.

Montana's defense has shut out opposing offenses for over 115 minutes and hasn't allowed any points since the opening drive of the season.

Conlan Beaver had one thought he couldn’t shake after he came to Montana to visit Yellowstone National Park when he was 10 years old.

The Montana Grizzlies host Western Illinois in their home opener in Missoula.

Montana's running back group took another hit, likely leaving the Griz with true freshmen carrying the bulk of the load Saturday.

Montana's Donaven Dorsey, center, warms up with Mack Anderson, right, and Freddy Brown III, left, in the hallway near the Montana locker room at the Wells Fargo Arena in Des Moines, Iowa, on Thursday.

Montana head coach Travis DeCuire looks on in the second half against Michigan in the first round of the NCAA Tournament at the Wells Fargo Arena in Des Moines, Iowa, on Thursday.