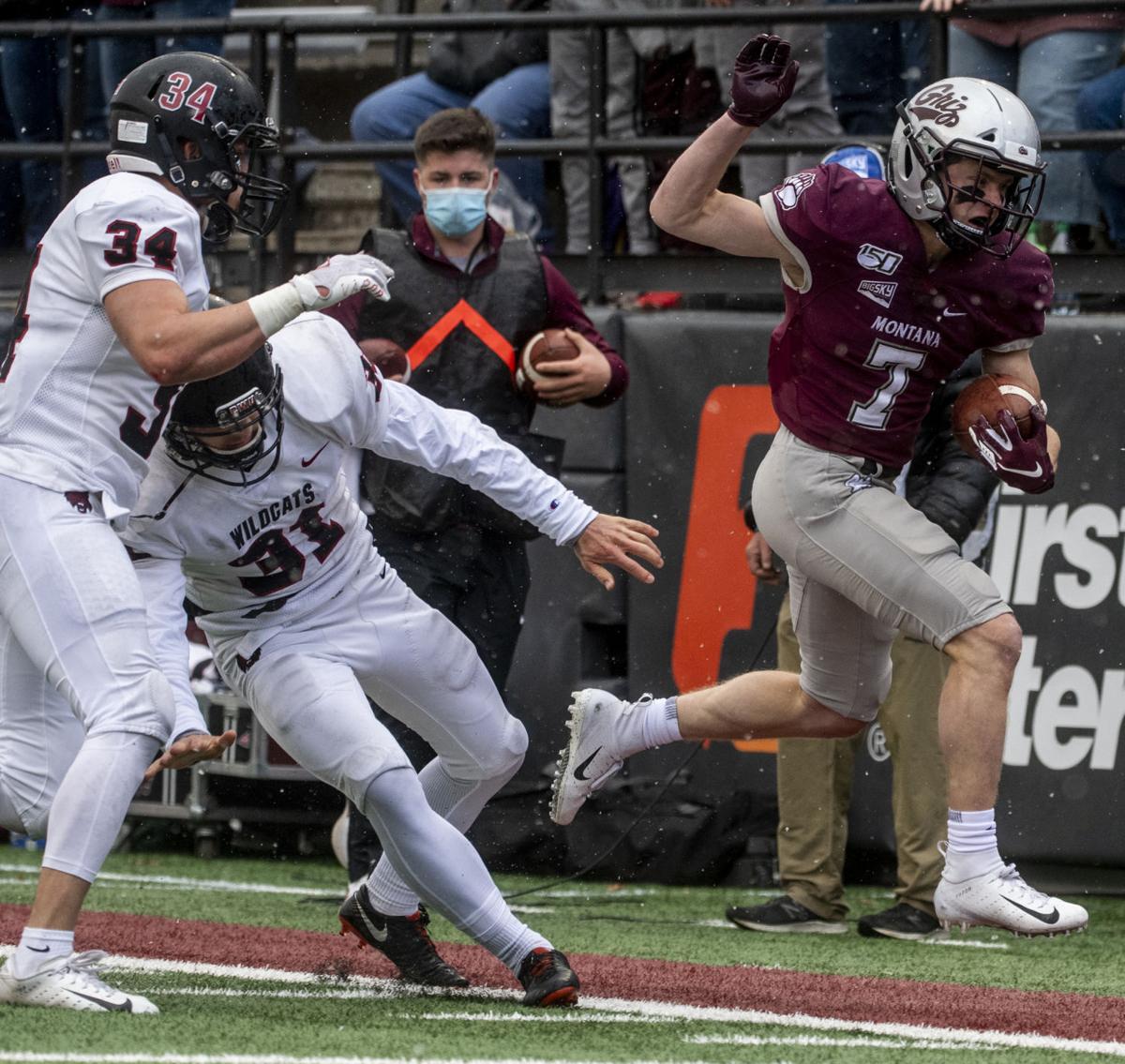 Montana wide receiver Gabe Sulser (7) gets funneled out of bounds after making a 46-yard punt return to the Central Washington 8-yard line during the Grizzlies' 59-3 win at Washington-Grizzly Stadium Saturday. 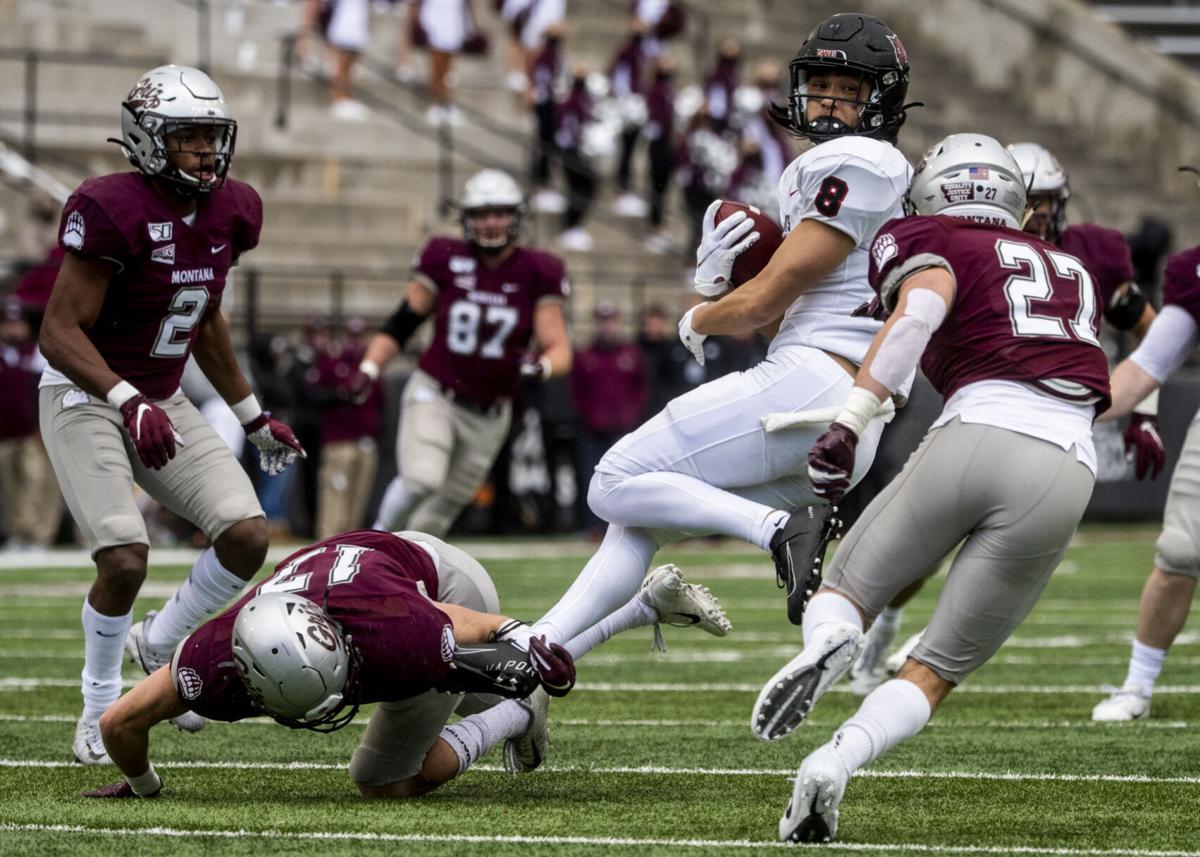 MISSOULA — It’s not too surprising that a Bobby Hauck-coached team would excel in the special teams game.

What was surprising about the strong play from that group in the Grizzlies’ 59-3 win over Central Washington Saturday was that three of the five spark plugs were new to starting at their position on the college level. Yet, the special teams still came up big, even if it was against a Division II team.

The most visible impact came in the return and coverage aspects. The Griz outgained CWU 182-56 on kickoff and punt returns despite having just six returns compared to the Wildcats’ five.

“The special teams were dominant, I would say,” Hauck said. “When you don’t have a guy who’s kicked off, punted or punt returned going into a game, it’s a little unsettling, and our guys did a really nice job.”

Junior Gabe Sulser had a team-high 162 all-purpose yards as he had 62 yards on four receptions and one score, 54 on a kick return and 46 on a punt return while taking on an increased special teams role. It was his first live action since a leg injury ended his 2019 season about midway through the year, and he flashed the potential he showed coming out of high school at Billings Senior.

"It’s been so long, and my body isn’t quite used to this," Sulser said. "It’s been a long time since I've been actually sore from a game, so it feels good to be back. Believe it or not, I love that part about it."

After not fielding his first punt return attempt, Sulser scooped up a bouncing ball from the rugby-style punt and returned it 46 yards to the CWU 8-yard line, getting tackled by the final defender. UM failed to convert that into a score, turning the ball over on downs.

Sulser then impacted the kickoff return game as CWU kicked away from veteran return man Malik Flowers, ripping off a 54-yard return to the Wildcats’ 26-yard line before he got squeezed out of bounds. That set up a drive that conclude with Cam Humphrey finding Sulser for a TD pass, starting a 49-0 run.

“I’m a little green at the punt returning, so Coach had to get on me for that, like he should,” said Sulser, who has big shoes to fill taking over for record-holding return man Jerry Louie-McGee. “But yeah, it was just a quick, simple adjustment that we kind of could take advantage, really. It’s kind of odd seeing those types of punts. But it’s a pretty easy fix once we kind of get it down there. That was on me for not having my head in it.”

Malik Flowers nearly had his fourth career kickoff return touchdown when he took the game’s opening kickoff 50 yards to the CWU 45-yard line, getting tackled by the last player. That began a drive that was extended with a third-down bullet from Humphrey to Sammy Akem and that ended with Nick Ostmo punching in the ball from 1 yard out to go up 7-0.

New kicker Jack Cooper, a former Ole Miss walk-on, hit a line drive from 47 yards out through the wind and snow. He later missed wide left from 25 yards but hit all of his extra point attempts.

“That was a major factor in the game,” CWU head coach Chris Fisk said of special teams. “I think when you look at where we were deficient, special teams was glaring today. I think we gave them four or five short fields on special teams coverage and just really couldn’t get off any blocking on special teams and really struggled with that.”

Montana’s defense did exactly what it should do to a D-II team.

The Griz kept the Wildcats out of the end zone and nearly kept them off the scoreboard, giving up just a 37-yard field goal in the first quarter. But that doesn’t mean they’re entirely happy.

“We only gave up three points, but that’s still three too many, so we got to work on that,” said junior linebacker Patrick O’Connell, a Kalispell Glacier grad who had three tackles.

The Griz held CWU to 178 total yards of offense on 57 plays while gaining 529 yards on 81 plays themselves. The extra plays came as UM extended drives by converting 10 of 17 third downs and limiting CWU to 2 of 15.

“Especially early on, I think that was a big difference in the game because we controlled third down on both sides of the ball,” Hauck said. “When you’re doing that and you’re able to keep the chains moving and you’re able to get them off the field, it can happen where it kind of steamrolls on whichever team is not having success. That’s the way it played out.”

The Griz forced three turnovers as Gavin Robertson got his third career interception on a pass floated into double coverage. Jacob McGourin, who impressed in 2019 as a true freshman, recovered a quarterback fumble. And Missoula Loyola grad David Koppang got his first interception as he looked like a center fielder by hauling in an errant toss through over the middle of the field while wearing a club on his right hand.

Despite not having a sack, Montana tallied six tackles for loss and three pass breakups. Louisville transfer Justin Ford, a cornerback, had 2.5 of those TFLs as he and Robby Hauck led with five tackles apiece.

“I know one of our goals going into the game was to physically overwhelm them, and I could see that towards the end of the third quarter at least,” O’Connell said. “I think we did what we wanted to do to them.”

One big turning point for the defense came on the first drive of the second half. With UM up 24-3, the Griz made a stand on 4th-and-1 as Justin Belknap and Joe Babros took down Tyler Flanagan for no gain at the CWU 46-yard line. UM allowed just 10 first downs in the game and didn’t give up one the entire first quarter.

“I took two guys on, on that play, and I think Justin Belknap and Joe Babros came and pinched and made that crucial play for us,” O’Connell said. “But, obviously, like I said, that’s a crucial down and a crucial play in a game like that, especially with field position.”

It wasn’t too surprising that UM’s defense dominated, especially when CWU was missing All-American running back Michael Roots, who entered the transfer portal on Friday. CWU rushed for just 57 yards on 25 carries.

“I think any time you have an All-American leave, it’s tough to deal with,” Fisk said. “There’s a guy that has a lot of production that’s not there, not just in offensive production but in special teams. He’s a returner for us. It was tough for our team, but I don’t know that that was an emotional factor for us today.”

It didn’t help that CWU was starting Arizona State transfer Jack Smith after feeling that 2019 starter Christian Moore wasn’t ready yet after offseason shoulder surgery. Smith was 13 of 21 for 113 yards.

With All-American running back Marcus Knight sidelined with injury, sophomore Nick Ostmo and true freshman Xavier Harris got their chance to show what they’re capable of.

Ostmo, a backup last year, ran for 47 yards and one score on 17 carries and caught four passes for 43 yards and one TD. Harris came on during the second half, running 10 times for 37 yards and one TD and tallying 24 yards on two catches. They each scored on a 1-yard run and helped UM accrue 197 yards on 40 carries for an average of 4.9 per rush, although 49 of those came on a wide receiver jet sweep by Flowers.

Montana’s O-line with four returning starters didn’t appear as dominant as expected against a D-II team. CWU’s D-line held up well enough to limit big runs up the middle, which played into UM struggling with converting short fields into points.

“Central made plays on the ball in the pass game. They beat guys up front and tackled us in the run game,” Hauck said. “We just didn’t win. We didn’t execute. They did. Good by them, and we got to be better.”

The dismissal of five Lady Griz players — four from Montana — signals the end of not only an era but a formula that Robin Selvig used to build the program into one of the greatest in women's collegiate basketball history.

MISSOULA — Sisters Jordyn and Shelby Schweyen are no longer members of the Montana women's basketball team.

The Montana men's basketball team added DePaul transfer Oscar Lopez Jr. to the roster. Lopez is the fourth scholarship player to join the Grizzlies this offseason.

Montana is one of 42 states that does not use a shot clock for high school hoops.

Montana Grizzlies will be No. 6 seed at Big Sky Conference softball tournament

MISSOULA — Montana couldn't carry over the momentum from its series-opening upset victory over Weber State and will now face an uphill climb at the Big Sky Conference softball tournament.

How to stream Montana vs. South Carolina in 1st round of NCAA women's soccer tournament

Here's how to stream Montana's first-round game in the NCAA women's soccer tournament.

The Montana Grizzlies men's basketball team adds needed size, depth at center, and some versatility on the perimeter with a trio of newcomers.

Montana wide receiver Gabe Sulser (7) gets funneled out of bounds after making a 46-yard punt return to the Central Washington 8-yard line during the Grizzlies' 59-3 win at Washington-Grizzly Stadium Saturday.