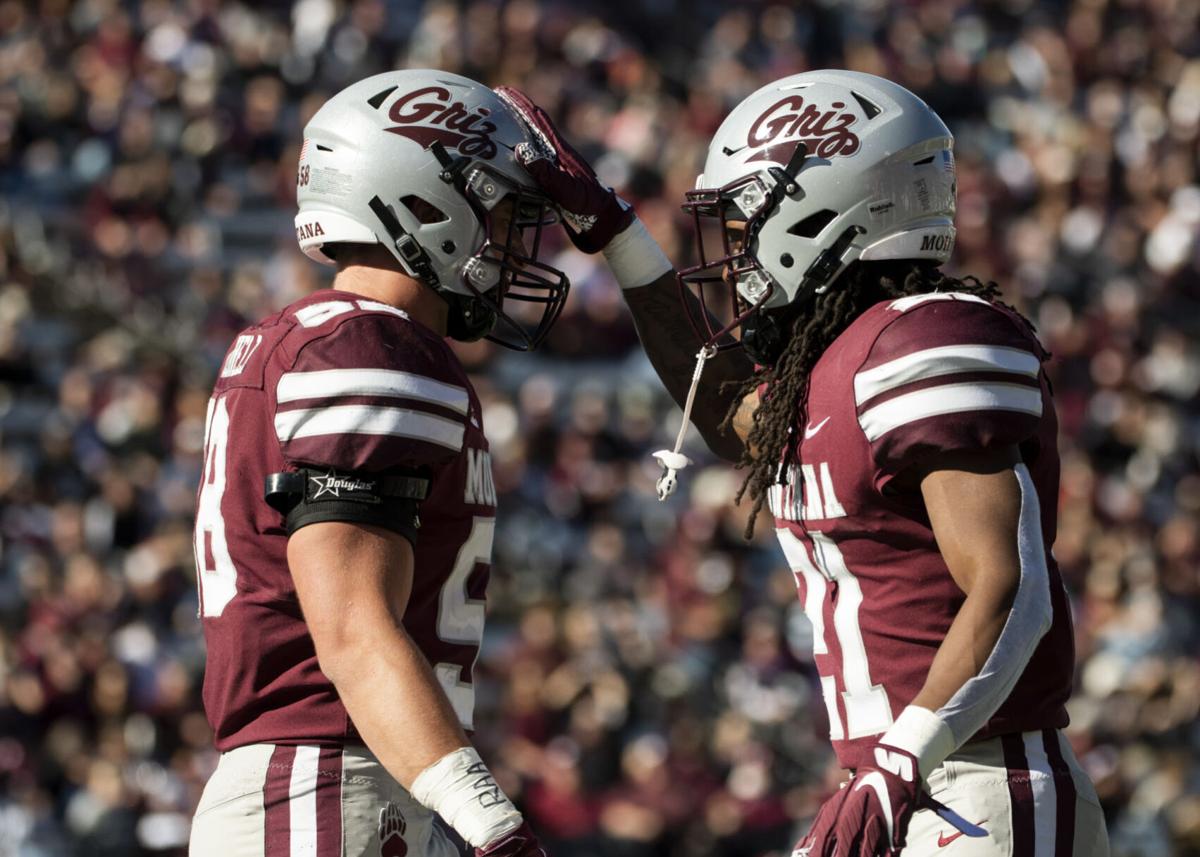 Montana’s Justin Ford (right) and Patrick O’Connell (58) celebrate after O’Connell made a stop during the Grizzlies' 31-14 win over Dixie State on Saturday at Washington-Grizzly Stadium. Ford had an interception, forced fumble and fumble recovery in his third career start for UM. 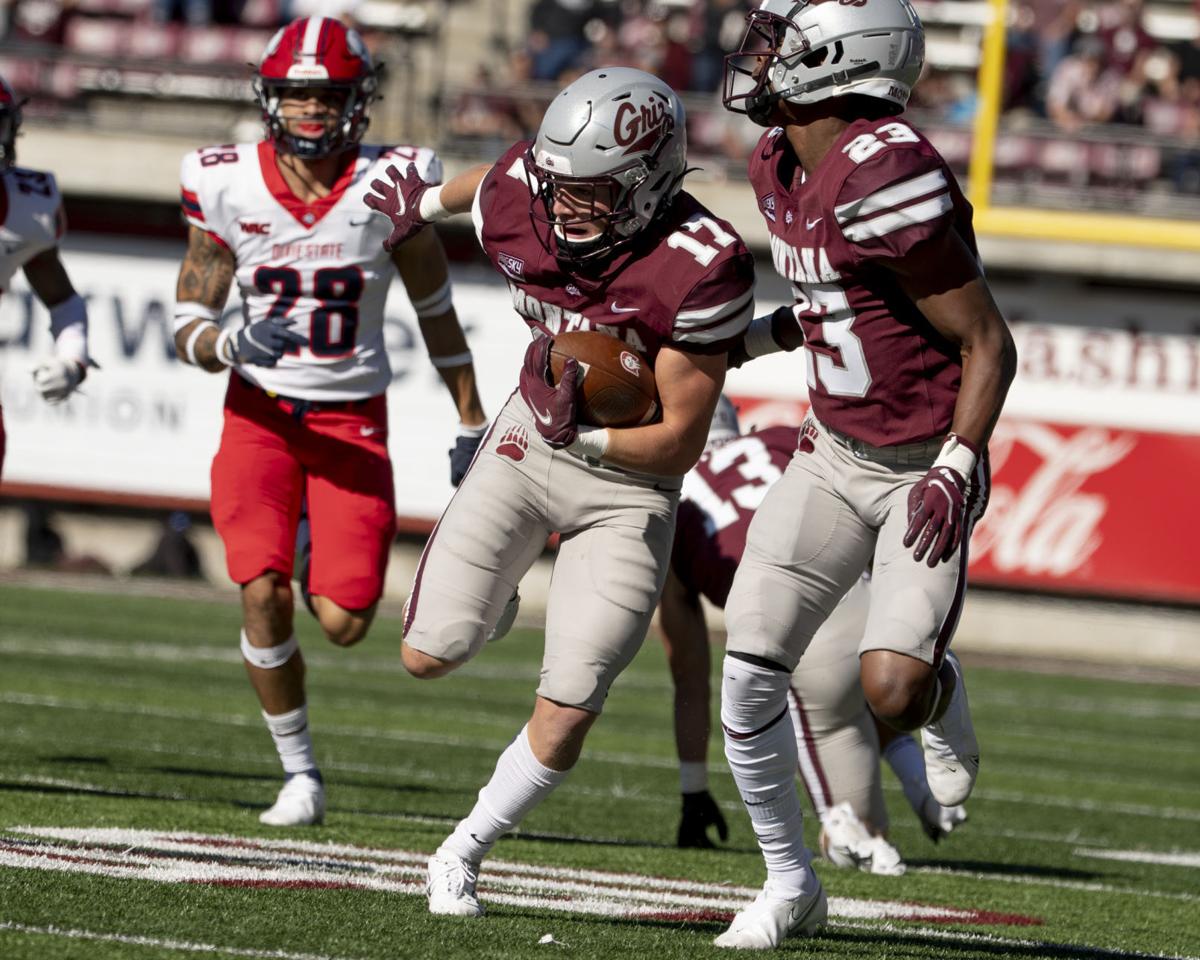 Montana’s Robby Hauck returns a punt during the Grizzlies' 31-14 win over Dixie State on Saturday.

MISSOULA — Justin Ford got a chance at redemption and came through in a big way in Montana’s 31-14 win Saturday.

The Montana cornerback intercepted a slant pass in the end zone to keep Dixie State off the board in the first quarter. Just four plays earlier, he appeared to slip in one-on-one coverage, but quarterback Kenyon Oblad overthrew a wide-open Keith Davis in the end zone.

Ford’s interception was his third of the season, tying him for the Big Sky Conference lead and tying him for seventh in the FCS. It was also his third consecutive game with an interception, making him the first Griz to pull off that feat since Trumaine Johnson in 2010.

“Our defense tries to stay even-keel,” said Ford, whose other interceptions have come deep in UM territory at the 9-yard line and 11-yard line. “Every down is just as important. Just because they’re in the red zone, we try to stop them from getting there, so now that they are there, we hold our head high on not allowing points.

"It’s just that much important. We really go into everything with the same mindset no matter who we’re playing. That’s just how we play.”

Ford, who made his third start in five games after playing behind sophomore Corbin Walker in camp, has been an important part of the revamped cornerback group that prides itself on playing fast and physical. He’s showing why he was so highly rated coming out of junior college, having received 20 Division I offers before choosing Louisville in 2019.

Ford transferred to Montana in 2020 and played in both spring games, showing his crushing hits as a defender. He feels it helped him prepare for this fall, his first extended playing time since the 2018 season after he missed 2019 with an injury sustained in fall camp.

“I kind of knew the defense already, but you really don’t know until you go play a game with a group of guys,” he said. “I felt like I was comfortable in those two (spring) games, and then now I think we’re just rolling as a team and just really like sticking together as a group.”

With Dixie State threatening to score in the fourth quarter, Ford forced a fumble on fourth-and-goal from the 1-yard line. He had a strip-sack of Oblad and then recovered the ball.

“That’s just kind of how we play: Go get the football at any chance,” he said.

Ford stumbled in trying to pick up the ball. When he did, he ran eight yards before trying to lateral the ball to linebacker Jace Lewis, which turned out to be an illegal forward pass. The lateral attempt drew a serious moment on the sideline that drew a laugh from Montana coach Bobby Hauck after the game.

“I remember what I said to him. Here’s what I said, ‘The fans love it, and I hate it. You decide who you want the good favor from,’" Hauck said as Ford, sitting to Hauck’s left, pointed to him.

UM’s defense was depleted on the line and in the secondary but showed its depth in holding Dixie State to 261 yards, 2 of 13 on third downs and 1 of 3 in the red zone. The Griz collected four sacks and didn’t allow DSU’s offense to score until there were only 92 seconds left in the game.

The Griz played without defensive ends Joe Babros and DeAri Todd and safety Gavin Robertson. Babros has been in a walking boot since getting hurt early in the Cal Poly game, but he went through warmups. Robertson, who had been reportedly sick, also went through warmups. Todd wasn’t seen in uniform after an injury late in the first half in the Eastern Washington game.

Freshman Henry Nuce, a Kalispell Glacier grad, and junior RJ Nelson started at the defensive end positions. Regular starter Justin Belknap and second-stringer Jacob McGourin both came off the bench early on and each had one of the Grizzlies’ five tackles for loss. Sophomore safety Garrett Graves, a Eureka grad, got his third straight start and had five tackles.

The linebacker group has been solid all year, and junior Marcus Welnel led the Griz with eight tackles. Fellow junior Patrick O’Connell, who appeared to injure his right hand in the Eastern Washington game, added seven tackles

“It was an interesting week to say the least in terms of figuring out who was going to plug in where and how much guys were going to be available to play and how much practice they got,” Hauck said. “It was a rough week in that regard.”

Montana cornerback Robby Hauck looked as if he was going to return a punt for a touchdown, but he got tripped up by one of his own teammates, cornerback Autjoe Soe.

“When he made the one guy miss in front of us, I thought he was going to score,” Bobby Hauck said. “Then Soe tripped him, our guy tripped him, which is too bad, but that’s the way it goes.”

Freshman Keelan White had started at punt returner in place of Gabe Sulser, who didn’t dress after being injured last week. He bobbled his first two returns, leading to Robby Hauck going in.

Robby Hauck’s big return of 34 yards put the Griz at the 25-yard line late in the second half as they tried to build on their 3-0 lead. They got down to the 4-yard line but settled for field goal, which turned out to be a fake. Holder Mitch Roberts flipped the ball to kicker Kevin Macias, who ran right and tried to cut back inside, only to be dropped for no gain.

“They sniffed it out,” Bobby Hauck said. “Good play by them.”

Senior wide receiver Sammy Akem had four receptions Saturday, giving him 157 for his career to move into 12th place in UM history. He passed Ryan Bagley and Samori Toure. Jerry Louie-McGee holds the record at 230.

Akem also had 57 receiving yards, giving him 2,264 in his career and moving him into 14th place in UM history. He passed Jimmy Farris and Bill Cockhill. Jamaal Jones holds the record of 3,021.

Robby Hauck had six tackles, giving him 282 in his career to move into 18th place in UM history. He passes Kendrick Van Ackeren in the win. Dante Olson had the record of 397.

Members of Montana's 2001 national championship team have raised nearly $300,000 for the athletic department ahead of this weekend's 20th-anniversay celebration.

Montana Grizzlies still 'a work in progress' despite 4-1 record, No. 5 national ranking

Facing a team that uses two quarterbacks is becoming a trend for Montana this season. But Sacramento State's pair of QBs is unique from the previous ones the Griz have faced.

Bill Speltz: Montana Grizzlies save face after sluggish half against Dixie State

MISSOULA — The anxiety and concern were uniform across the board for Griz Nation at halftime of Saturday's home football game.

Eureka grad Garrett Graves is finding his home at safety after he began his Montana career at quarterback and also played some running back and wide receiver.

Montana’s Justin Ford (right) and Patrick O’Connell (58) celebrate after O’Connell made a stop during the Grizzlies' 31-14 win over Dixie State on Saturday at Washington-Grizzly Stadium. Ford had an interception, forced fumble and fumble recovery in his third career start for UM.

Montana’s Robby Hauck returns a punt during the Grizzlies' 31-14 win over Dixie State on Saturday. 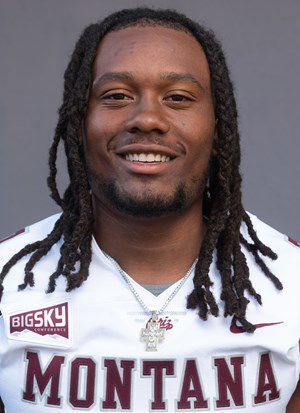