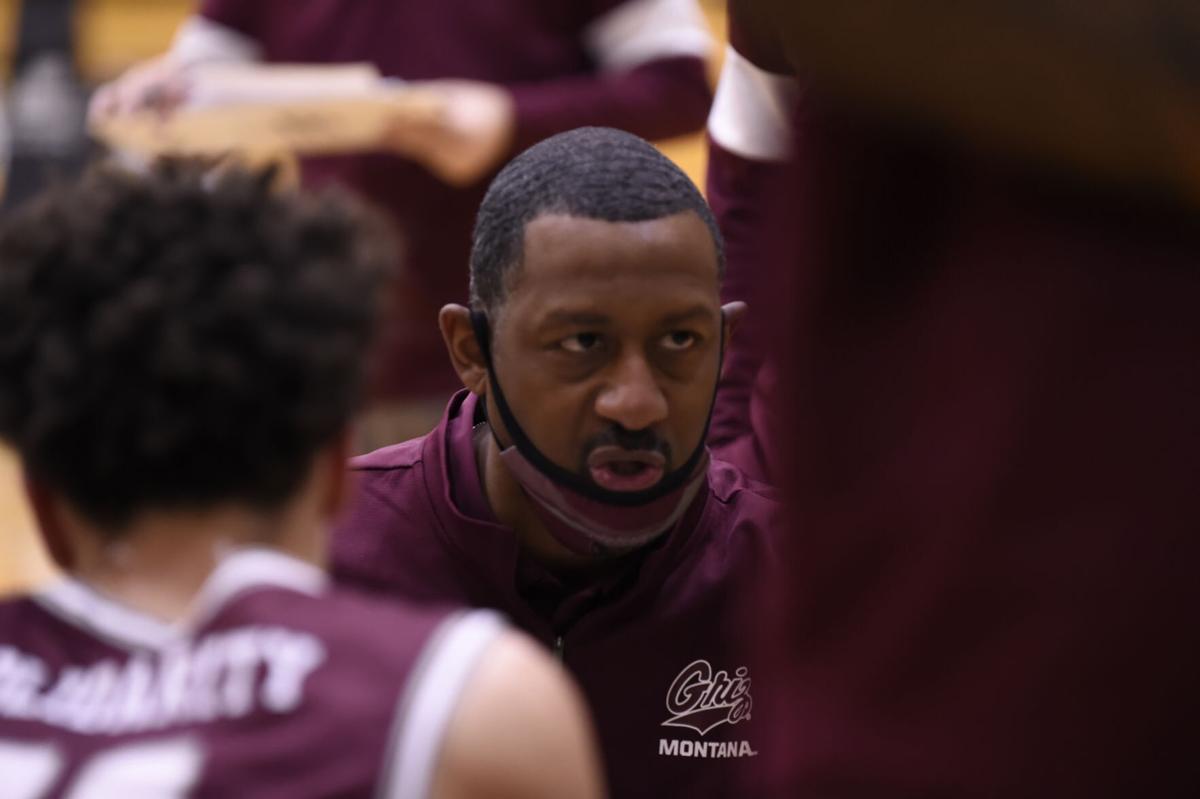 Montana head coach Travis DeCuire talks to his team during a break in the action against Eastern Washington on Thursday in Cheney, Washington. The Griz suffered a 90-76 loss to the Big Sky-leading Eagles, the largest margin of defeat in DeCuire's seven seasons in Missoula. 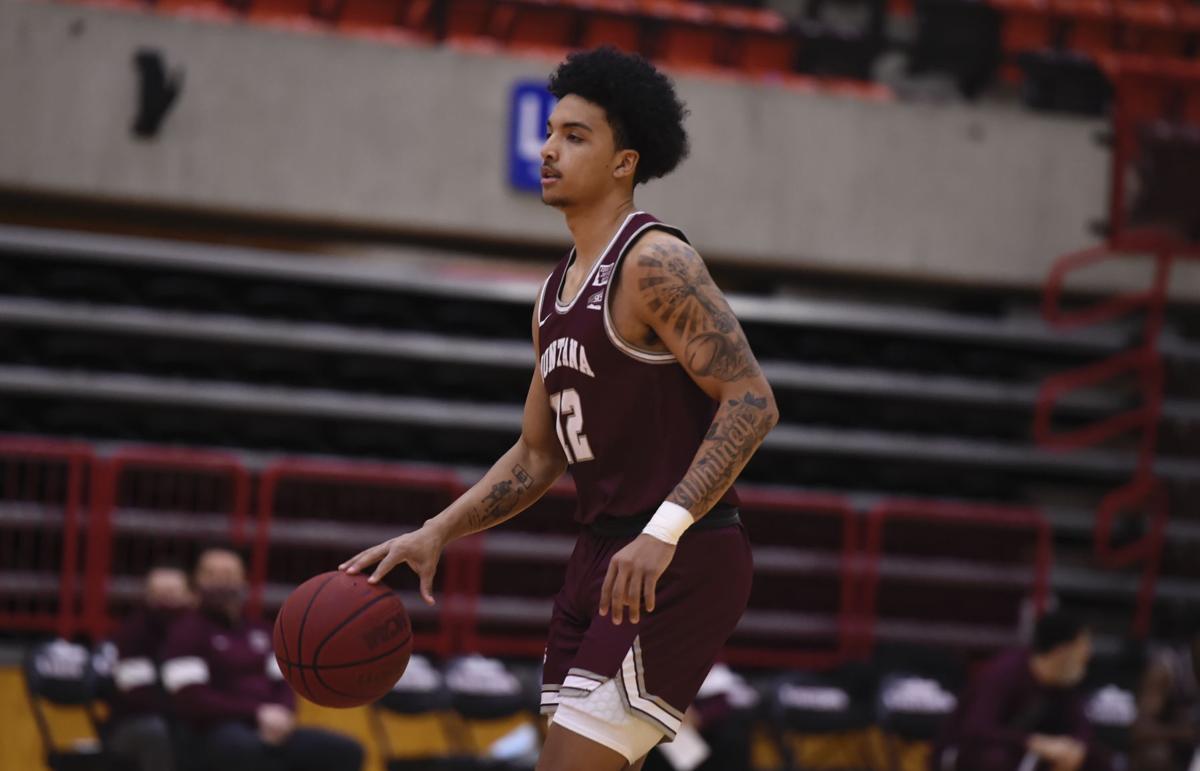 Montana freshman guard Brandon Whitney dribbles the ball against Eastern Washington on Thursday in Cheney, Washington. Montana lost 90-76, the second game in a row the Griz have allowed 90 or more points.

An early deficit was just too big of a mountain to climb for the Montana men's basketball team in a 90-76 loss to Big Sky-leading Eastern Washington on Thursday night in Cheney, Washington.

The 14-point loss was the largest margin of defeat in Griz coach Travis DeCuire's tenure in Big Sky play and was just the third time UM has lost by double digits in league play since he took over the program seven years ago.

"I thought we would be more ready to play and compete," DeCuire said to KGVO radio after the game. "Sometimes when you've got guys who haven't played against this team before, they don't have a true understanding for what is different about them."

The Eagles led by as many as 27 points in the first half. Montana cut the lead to 14 points five different times, 13 points once and 12 points late in the game, but each time the Griz looked to get within reasonable striking distance, Eastern Washington managed to hit a shot and stretch the lead.

Montana will host the Eagles on Saturday at noon in Dahlberg Arena. Thursday's loss was the second game in a row UM has allowed 90 points.

Eastern Washington hit 19 of its first 22 shots and made nine 3-pointers in the first half. Montana came into the game ranked near the top of the NCAA in opponent 3-point percentage, but the Eagles had good looks throughout the game.

Montana trailed 47-20 in the first half but managed to rip off a 12-0 run thanks in part to a Robby Beasley 3-pointer and four free throws in a row from DJ Carter-Hollinger.

The Grizzlies played good defense during that stretch and only had six first-half turnovers. But Eastern Washington looked untouchable offensively in the opening 15 minutes, especially Eagles forward Kim Aiken Jr., who scored 16 of his 21 points in the first half.

Beasley was a bright spot for Montana, scoring a career-high 25 points and hitting three 3-pointers.

"Once he sees one go through the basket, he feels like he's on fire," DeCuire said. "It was good to see him get going early."

Sophomore Eddy Egun, who has had his playing time fluctuate greatly this year, was plus-4 in seven first-half minutes and played well defensively. Egun has been used in games against big guards this season and provided a spark during the 12-0 first-half run. He scored 16 points, the second time this season he has been in double figures, setting a career high in scoring.

Montana has just 11 players on its roster after Michael Steadman left the team at the beginning of the week, and 10 of them played in the first half.

UMass Lowell transfer Darius Henderson saw two first-half minutes, picking up a foul and missing his only shot attempt. It was his first appearance since Dec. 18, 2020, when he played three minutes against NAIA Dickinson State.

Mack Anderson started the game for the Grizzlies at center but only played 13 minutes and fouled out, scoring just two points. Kyle Owens struggled from the field, hitting just 1 of 7 shots and never seemed to find a comfortable rhythm offensively in 18 minutes.

Montana shot 41.5% for the game and was 7 of 18 from behind the 3-point line. UM, one of the best free throw shooting teams in the nation, was 15 of 16 from the foul line. The Grizzlies have shot 80.7% from the foul line this season, the third best mark in the NCAA.

Eastern Washington did seem to relax a bit in the second half, but UM was not able to string enough good offensive possessions together to mount any sort of serious run. The Eagles shot 54.4% for the game, though they hit just 10 of 26 shots in the second half.

"I thought we responded to their fight as opposed to being the aggressor," DeCuire said. "We have to find out aggression in the next 36 hours."

The Montana Grizzlies are hosting Portland State at Washington-Grizzly Stadium for the second of two spring football games after playing no games in 2020.

'We’re on the clock': Montana turns focus toward offseason, preparing for fall after 2-0 spring season

With the spring football season now over, Montana turns its focus toward the offseason and preparing for a championship run in the fall.

Take a dive into some funny tales from the growing friendship between Montana coach Bobby Hauck and Portland State coach Bruce Barnum ahead of their spring football game Saturday.

Montana's ground game was challenged by coach Bobby Hauck last week. They responded in a big way on Saturday.

Stars of the game, report card from Montana's win over Portland State.

An FBS dropdown player who was a 3-star recruit coming out of high school commits to Montana.

Montana women's soccer is heading back to the NCAA tournament.

Montana head coach Travis DeCuire talks to his team during a break in the action against Eastern Washington on Thursday in Cheney, Washington. The Griz suffered a 90-76 loss to the Big Sky-leading Eagles, the largest margin of defeat in DeCuire's seven seasons in Missoula.

Montana freshman guard Brandon Whitney dribbles the ball against Eastern Washington on Thursday in Cheney, Washington. Montana lost 90-76, the second game in a row the Griz have allowed 90 or more points.