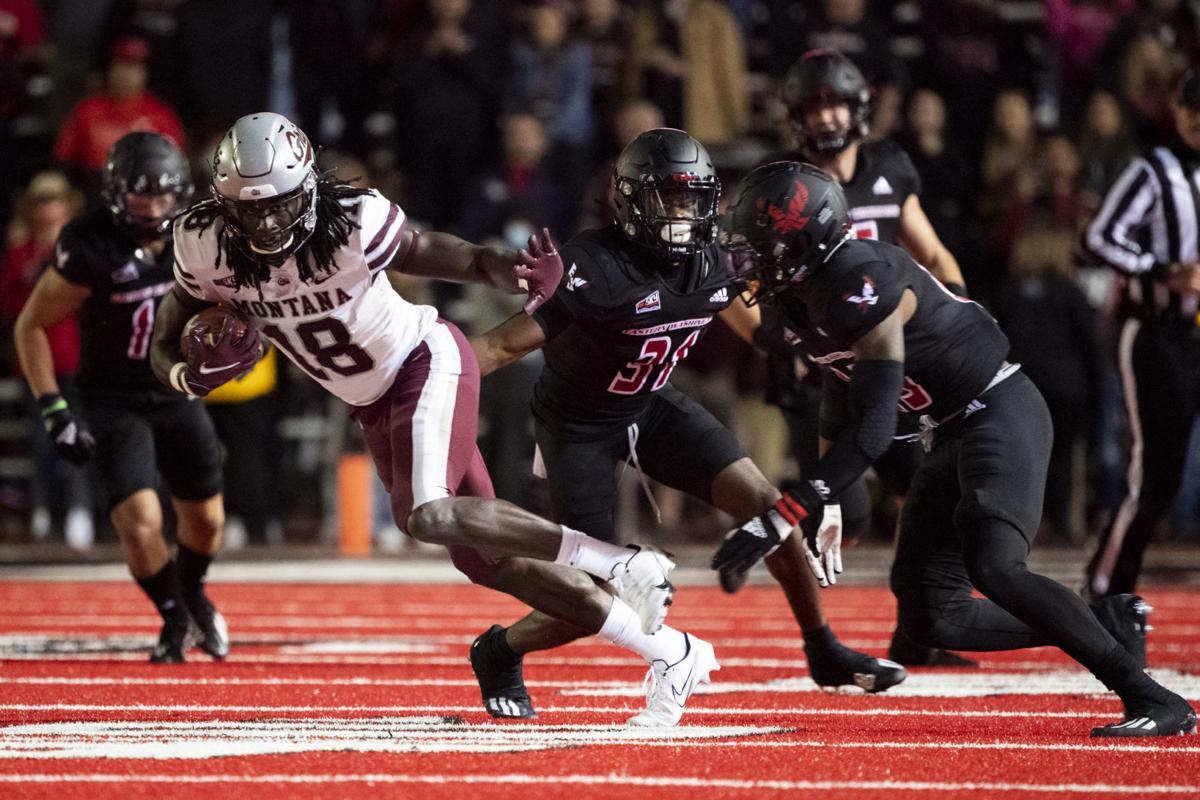 Montana wide receiver Samuel Akem runs the ball during Saturday's game at Eastern Washington. The Grizzlies suffered their first loss of the season, 34-28. 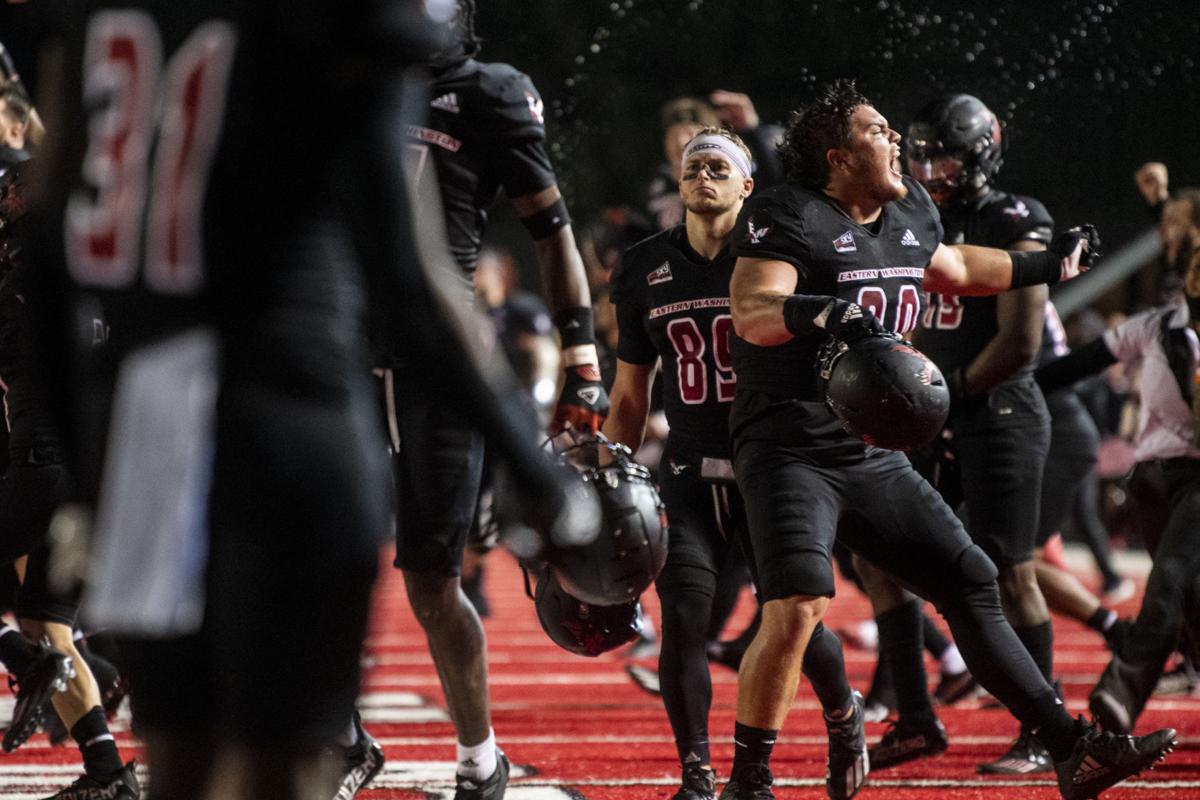 The Eagles celebrate their victory over the Griz Saturday at Roos Field in Cheney, Wash. 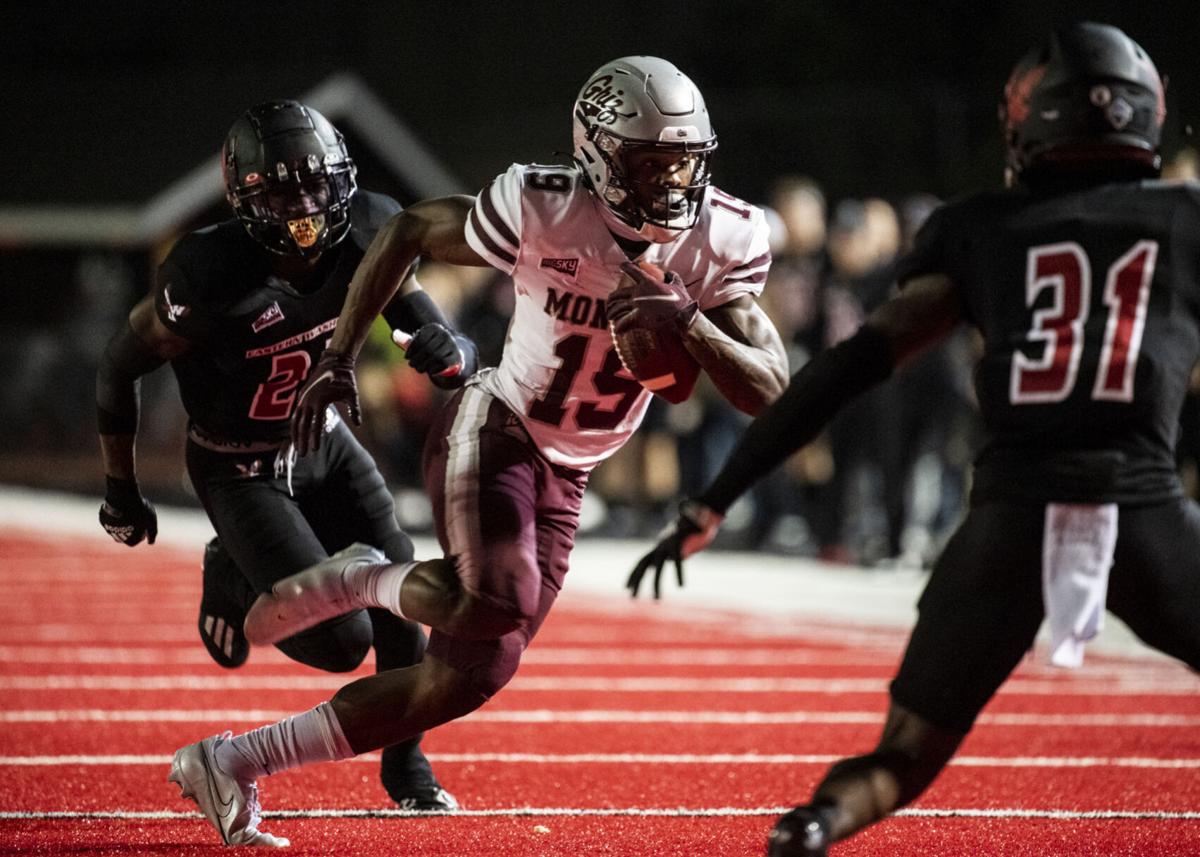 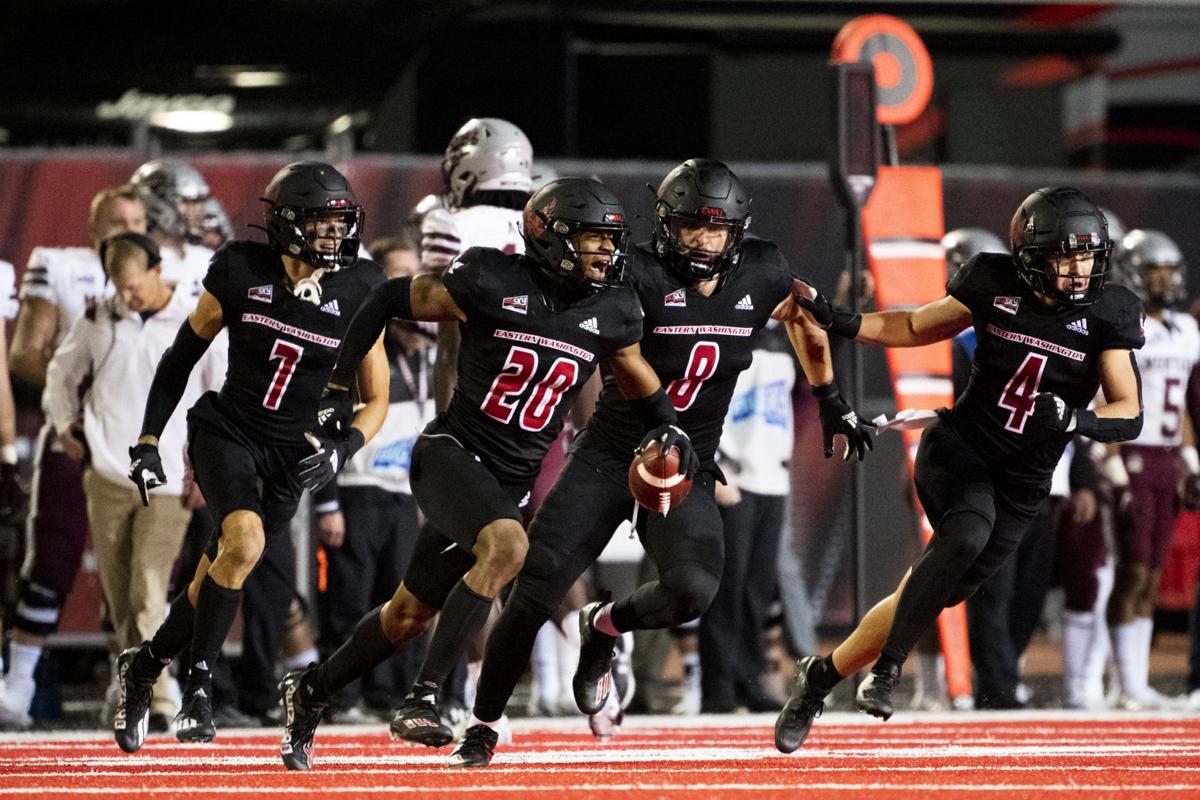 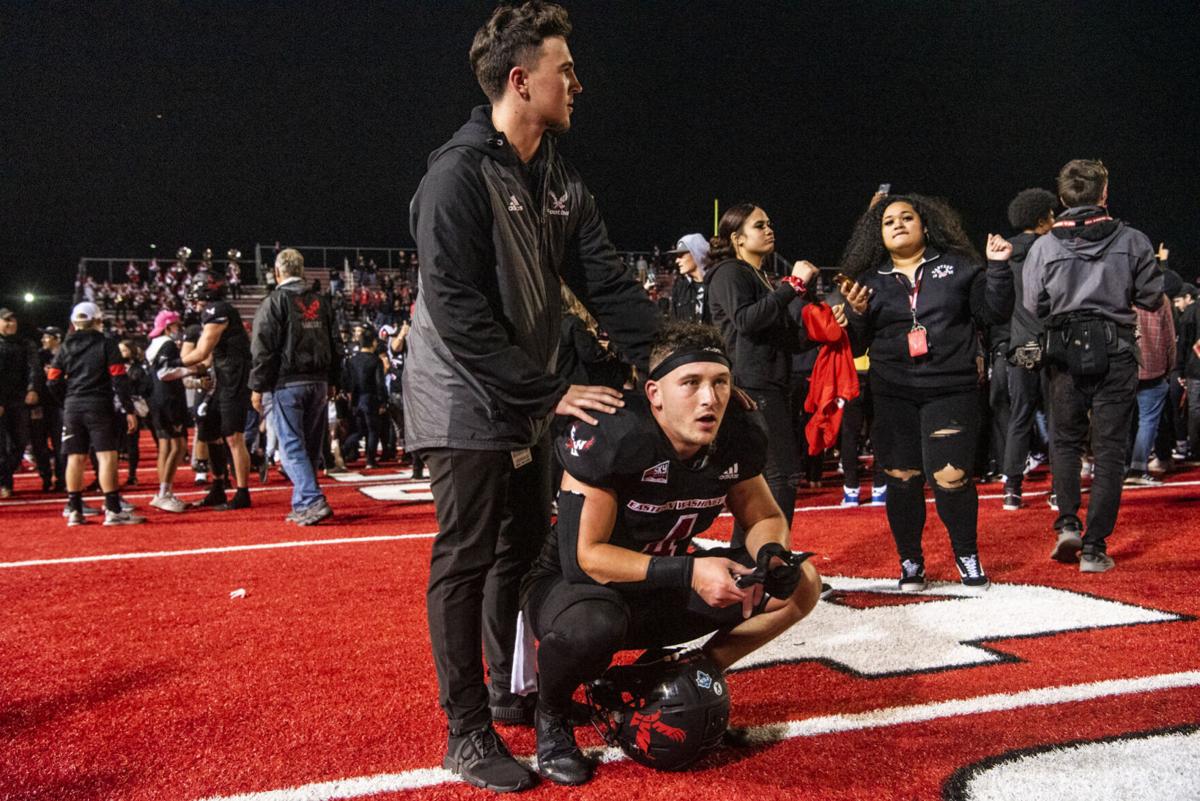 Eastern Washington’s Calin Criner looks on after the Eagles defeated the Griz Saturday. 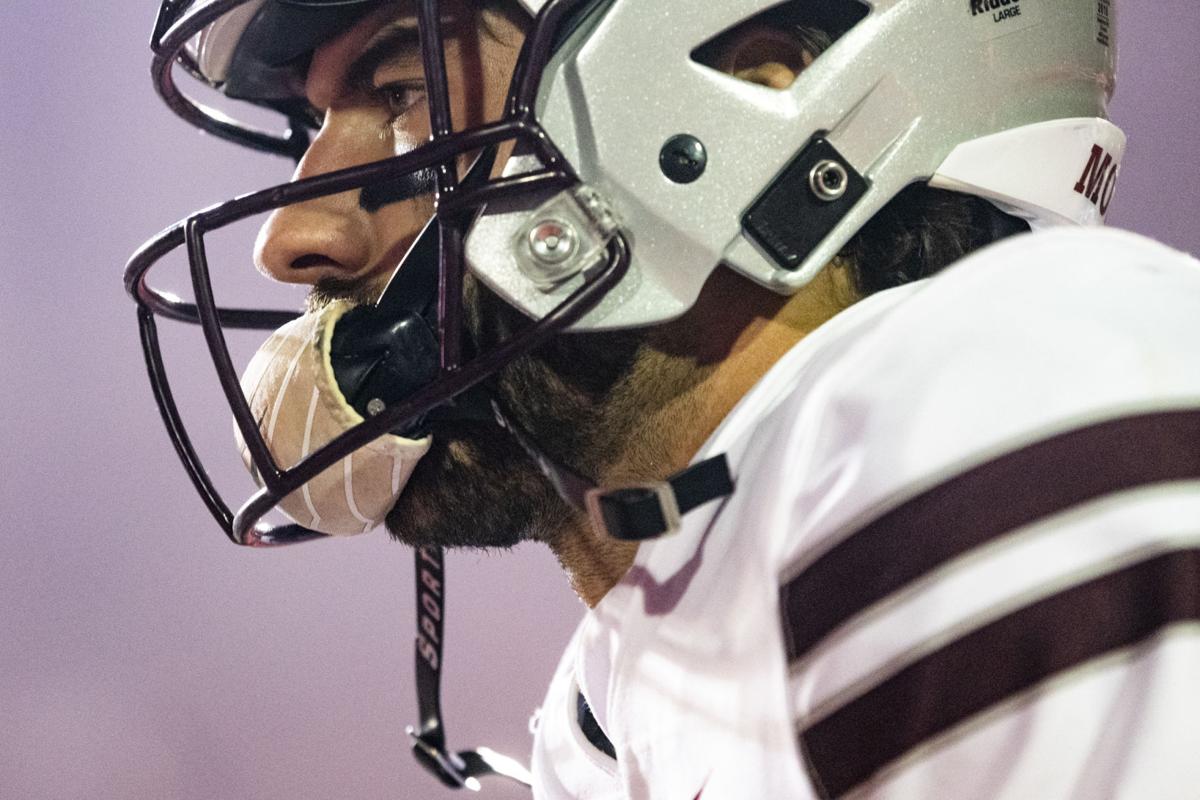 Montana quarterback Cam Humphrey looks on during the coin toss Saturday. Humphrey suffered a right leg injury late in the game and his status for this week is a question mark. 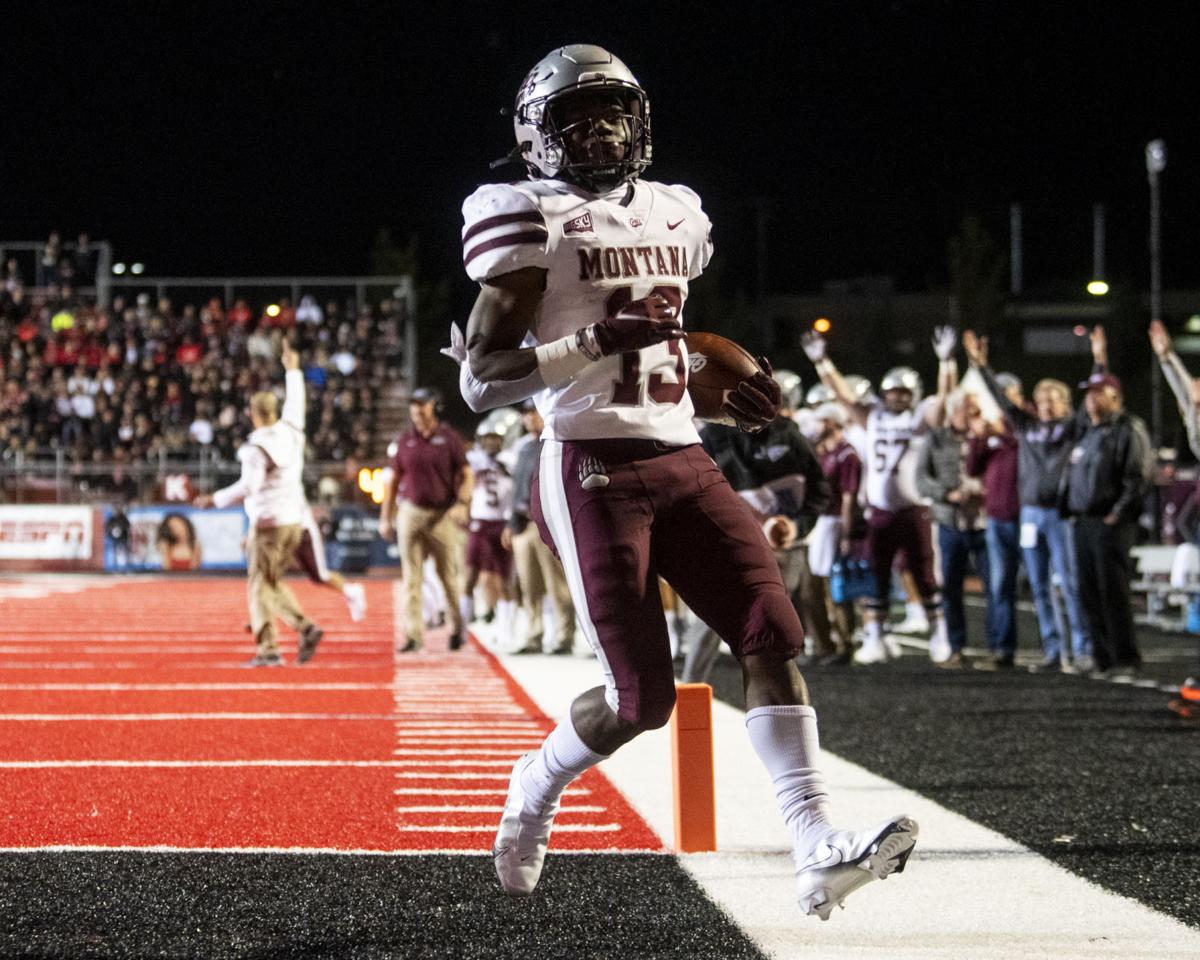 Montana’s Xavier Harris (13) runs the ball into the end zone for a touchdown during Saturday's game. 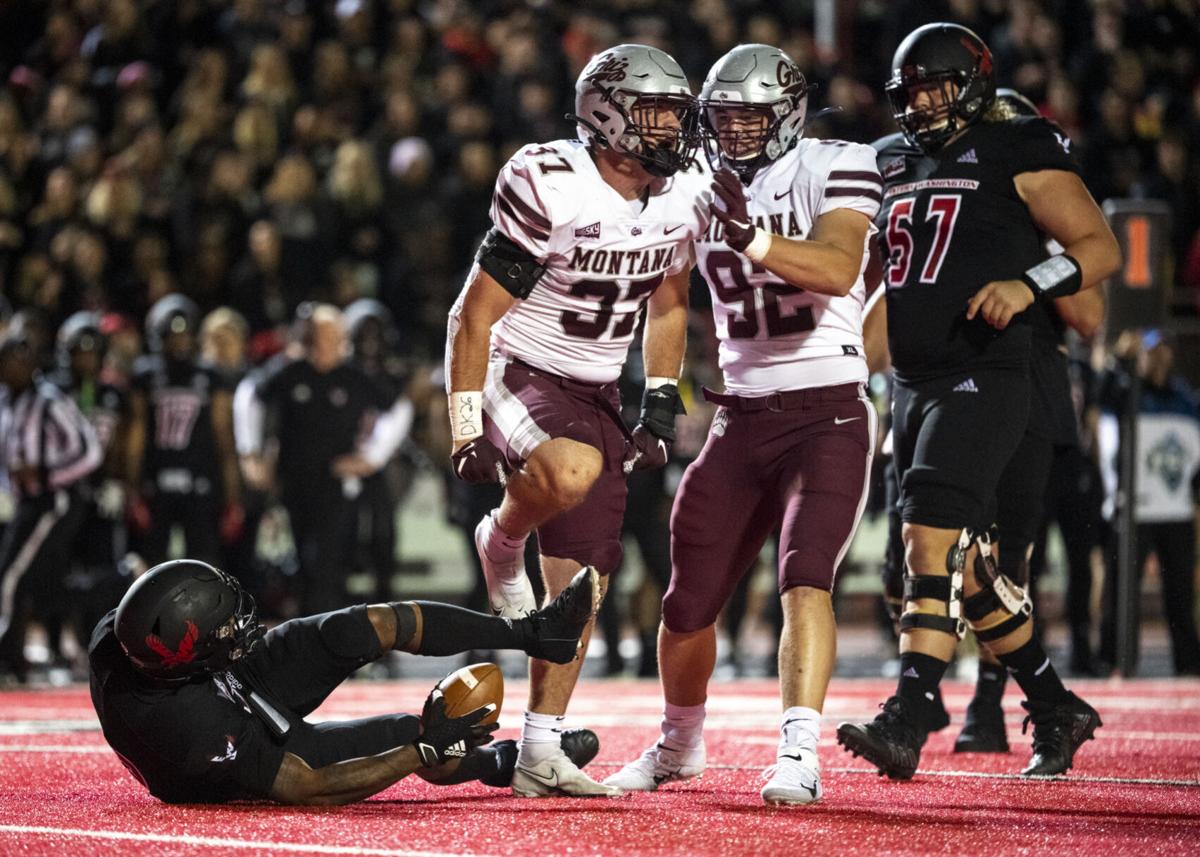 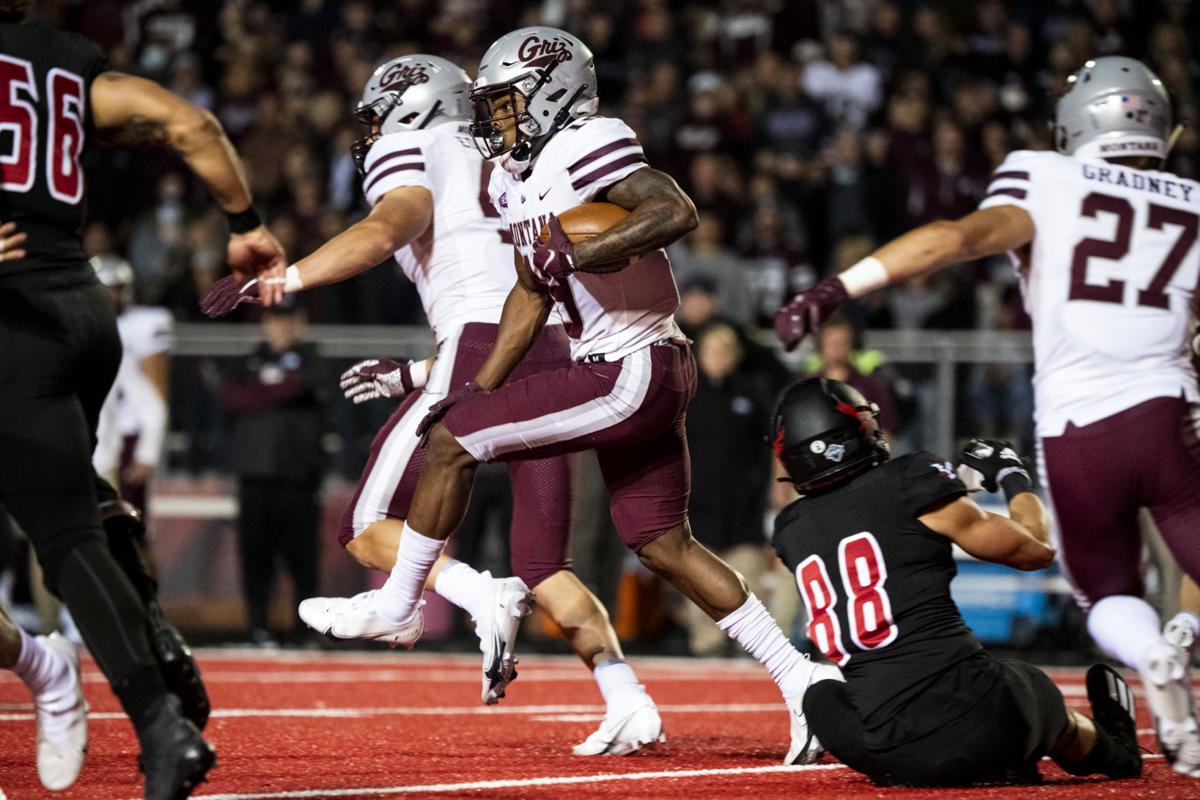 Montana’s Malik Flowers, middle, runs back a kick return for a touchdown during Saturday's game. 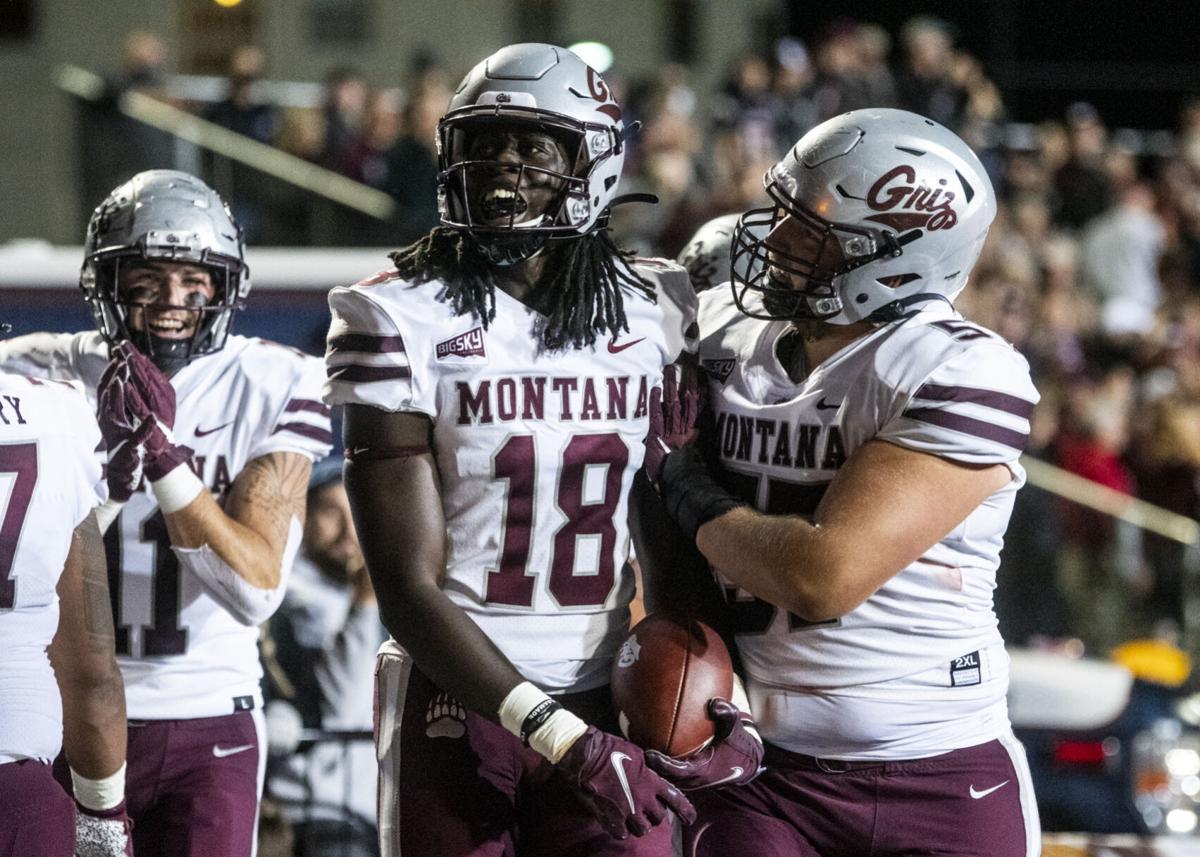 CHENEY, Wash. — As Kris Brown’s final-second heave cut through the dark sky, all that hung in the balance was the outcome of the game between two of the top six teams in the country.

What more could you ask for from the Big Sky’s first regular-season game on ESPN2? What more could you want from the clash of titans as No. 4 Montana and its dominant defense invaded the red turf of No. 6 Eastern Washington and its electric offense?

The showdown of heavyweights had everything needed for a made-for-TV drama. There were huge plays, timely turnovers, an electric kickoff return touchdown, teams continuing to trade blows despite injuries, a fourth-quarter rally by arguably the best player in the FCS and a freshman thrown into the fire seemingly poised to create the origin story of how a legend was born.

Alas, the pass from Brown, the redshirt freshman from Bozeman, was incomplete as it bounced around a group of players in the north end zone. The outcome was set to create pandemonium either way in a matter of seconds, and it was Eastern Washington (5-0) that had fans storm the field Saturday as the Griz (3-1) suffered their first loss of the season, 34-28.

It was an absolute thriller in front of an announced crowd of 7,944 and many more watching on national television.

“I really think that the game came down to, at certain crucial times, both sides had a chance to make plays, and they made more than we did,” UM coach Bobby Hauck said following the loss, which prevented the Griz from making their first 4-0 start to a season since 2009 and dropped them to 0-6 on the red turf since it was installed in 2010.

Eastern Washington matched its best start in program history at 5-0 and improved its home winning streak to 19-0. The competitive rivalry continued as the Griz lost to EWU for the seventh time in nine games and fell to 20-14 in the series since the Eagles joined the Big Sky, their most losses to any opponent in that stretch.

"It seems like we always need to play ‘til the last play of the game — good, bad or indifferent," EWU coach Aaron Best said of the series against UM going back to when he played for the Eagles in the late 1990s. "But it keeps people in the stands, on the edge of their seat, doesn’t allow us to breath easy as coaches. But the players I think enjoy the moment, I think they thrive in the those adverse moments."

Um had built a 21-10 lead, but the game shifted when it had a field goal blocked late in the third quarter. From there, it was a sprint to the finish as the teams combined for 31 points in the final 15 minutes after totaling 31 in the opening 45 minutes.

The Griz, who had allowed just 24 points on defense through the first 15 quarters of the season, were shown to be mortal as they were outscored 24-7 in the fourth quarter. The 24 points that quarter are the most UM has allowed in the final frame since Oct. 27, 2018, against UC Davis, when it gave up 36.

"Our team is resilient," Best said. "We’ve got a ton of leaders. They’re not scared of anything. We’re not going to get bullied, especially on our home field."

EWU quarterback Eric Barriere rose to the role of hero — or villian, depending on who you were rooting for — as he improved to 15-0 on his home turf. He led three consecutive touchdown drives in the fourth quarter and threw for 422 yards, two touchdowns and two picks on 26-of-46 passing. He had been sacked four times in the first half but just once after halftime as the Eagles changed up and improved their protection to handle UM’s pressure despite missing one of their starting offensive linemen.

Barriere had more high-quality targets than anyone Montana had faced. His favorite was Talolo Limu-Jones, who caught 11 passes for a career-high 231 yards and could've had more if he didn't drop a 50-yard touchdown pass in the first half as the Eagles were poised to go up 14-0. Limu-Jones left with an injury after a 58-yard catch that set up a 2-yard touchdown run by Micah Smith, which put Montana in a 24-21 deficit in the fourth quarter.

That score came one drive after Andrew Boston caught a 9-yard pass to trim UM's lead to 21-16 and one drive before Boston caught a 35-yard pass to start EWU's third straight touchdown drive as he collected six catches for 80 yards and two scores. Running back Dennis Merritt had his two longest runs, for 17 and 18 yards, on that third straight scoring drive and punched in a 1-yard touchdown to put UM down 31-21 as he finished with 103 yards on 23 carries.

The Griz allowed those three consecutive touchdowns on drives of 13, two and five plays across just 5:09 in the fourth quarter. Barriere did it mostly with his arm but showed how fleet of foot he was on EWU’s final possession after UM pulled within 31-28.

He converted a third-and-8 and fourth-and-7 with runs of 19 and 11 yards to help set up a field goal that put UM down 34-28 with 1:21 to play and forced the Griz to aim for the end zone on their final drive. UM allowed three fourth-down conversions on the four fourth-quarter scoring drives as the Eagles picked up four of five throughout the game.

“He made more plays with his feet than he has,” Hauck said of Barriere. “Good job by him. He showed some real toughness running the ball.”

“He’s the best player in America at this level bar none,” Best added.

Saturday was a day that top teams around the country were challenged. No. 1 Sam Houston rallied for a 21-20 win over Stephen F. Austin. No. 3 James Madison needed a rally for a 23-21 win over New Hampshire. No. 5 North Dakota State toughed out a 16-10 win over North Dakota. And No. 7 Southern Illinois survived for a 31-30 overtime win against Western Illinois.

The exception was No. 2 South Dakota State, which rolled to a 55-7 win over Dixie State. Montana, which will host Dixie State on Saturday, looked like it might join the list with SDSU by rushing out to a 21-10 lead after an opening-drive touchdown in the third quarter.

Griz linebacker Marcus Welnel then picked off Barriere, setting up a short field, but UM settled for a field goal, which was blocked because Hauck said not every player knew the correct play call. It was a turning point because the Griz offense wouldn’t find the scoreboard again.

UM has been riding running back Xavier Harris, who had a career-high 124 rushing yards and one score. But with the offense stalled, Malik Flowers provided a spark with a 99-yard kickoff return touchdown just when it looked like UM was out of the game trailing 31-21 with 9:24 to play.

Quarterback Cam Humphrey had a chance to rewrite the ending as he had the Griz marching down the field trailing 34-28. He had thrown touchdown passes to Sammy Akem in the second quarter and to Joey Elwell in the third quarter but went three-and-out, interception in the end zone and interception near midfield on his first three fourth-quarter drives.

With one final shot, he completed passes of 14 and 16 yards on his way to 14-of-26 passing for 150 yards and two touchdowns. He ran 12 times for 39 yards, but his final run, a 13-yard gain, led to a punishing hit deep in EWU territory that knocked him out of the game.

Enter Brown, who completed two passes for 21 yards to the EWU 13-yard line. As he lined up with four seconds left, he was flushed out of the pocket to his left and aired the ball from the 35-yard line into the end zone, where tight end Cole Grossman nearly caught it.

The emotions of many swung on a matter of inches.

Photos from the college football game between the Griz and Eastern Washington at Roos Field in Cheney, Wash., Saturday, Oct. 2, 2021.

Montana wide receiver Samuel Akem runs the ball during Saturday's game at Eastern Washington. The Grizzlies suffered their first loss of the season, 34-28.

The Eagles celebrate their victory over the Griz Saturday at Roos Field in Cheney, Wash.

Eastern Washington’s Calin Criner looks on after the Eagles defeated the Griz Saturday.

Montana quarterback Cam Humphrey looks on during the coin toss Saturday. Humphrey suffered a right leg injury late in the game and his status for this week is a question mark.

Montana’s Xavier Harris (13) runs the ball into the end zone for a touchdown during Saturday's game.

Montana’s Malik Flowers, middle, runs back a kick return for a touchdown during Saturday's game.