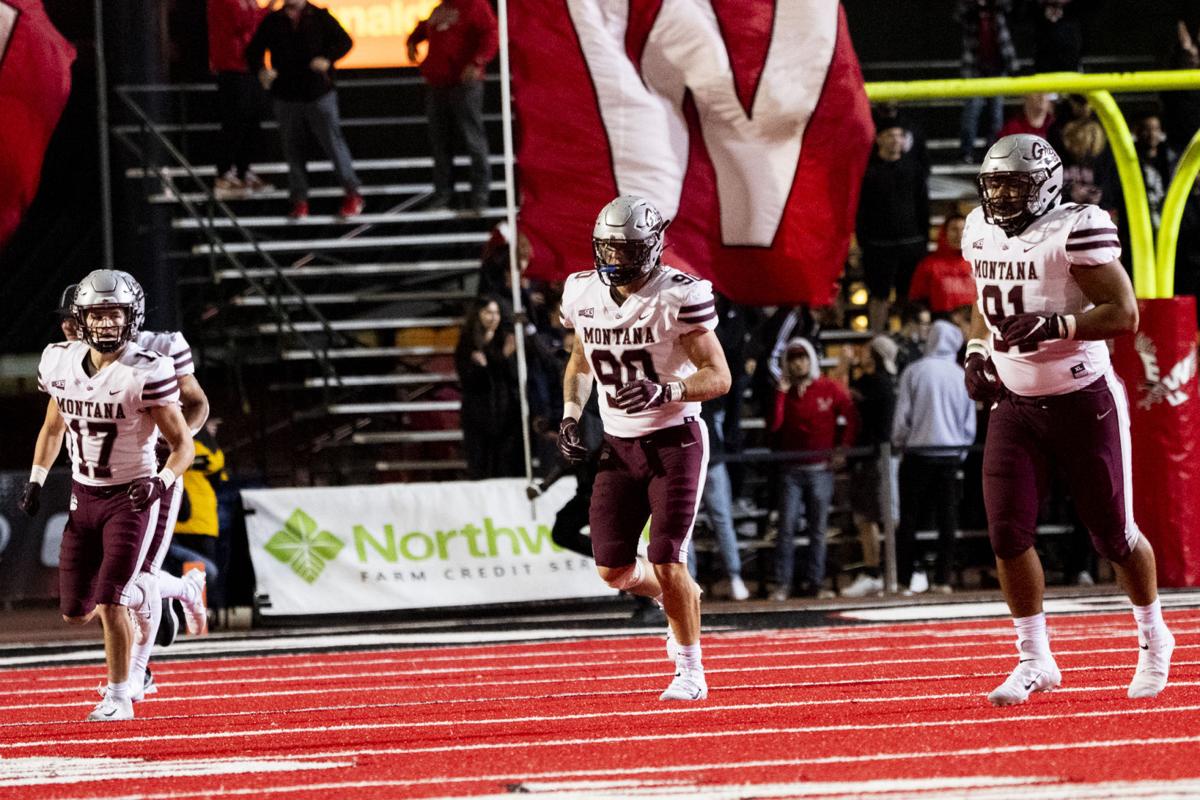 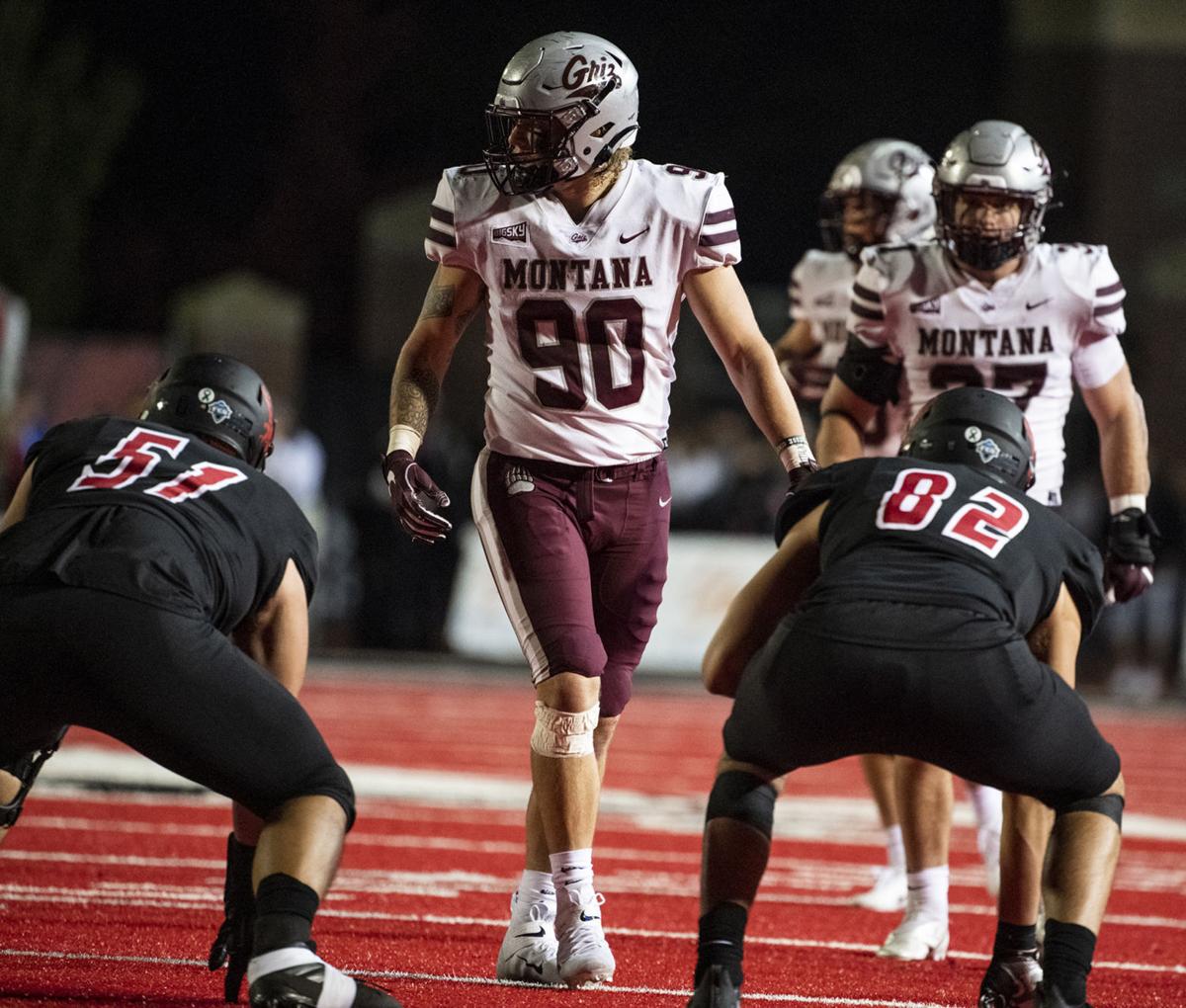 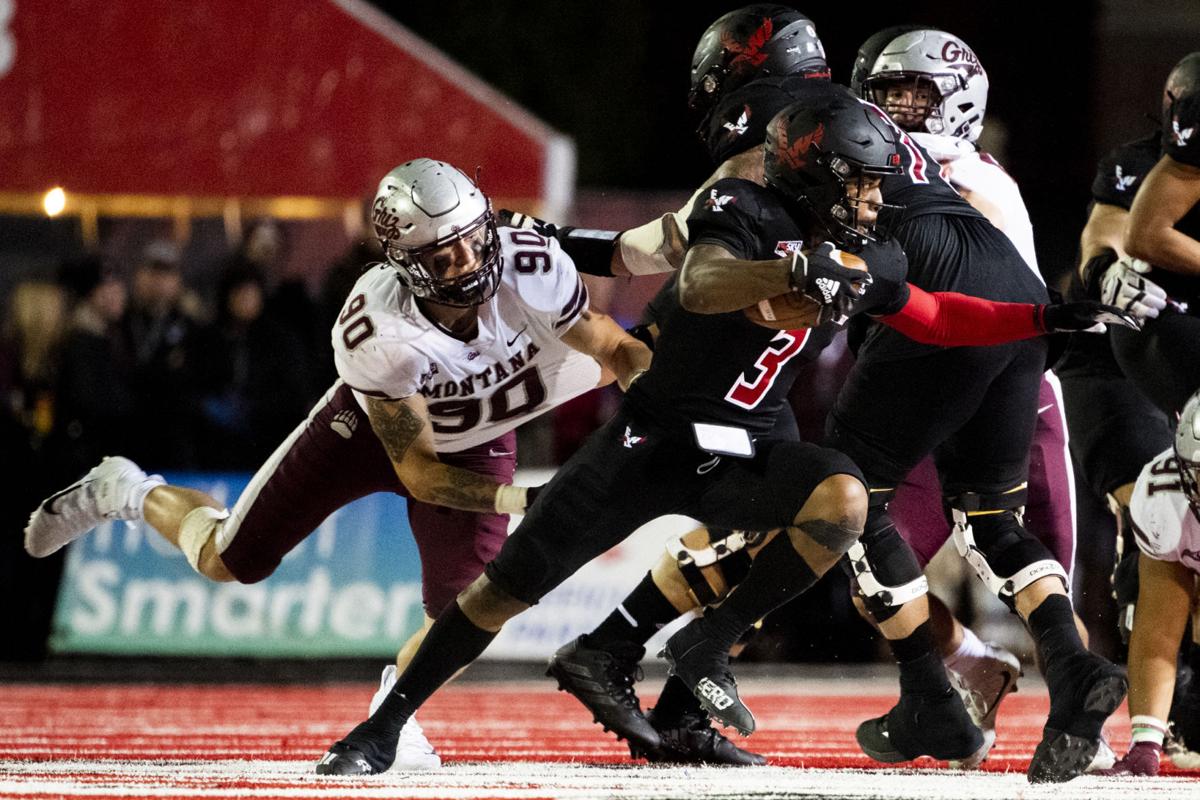 MISSOULA — Justin Belknap was going through a six-month stretch looking for a new football team when a thought went through his head.

“I don’t have to do this,” the Montana defensive end recalled.

Belknap had already gone from a walk-on to a starter at a Pac-12 school at that point. No one would blame him if he hung up his cleats for good.

Yet, Belknap had wanted to play a sixth season, but he found out his scholarship at Arizona wouldn’t be renewed after an injury derailed his junior and senior years. So, he went home and began looking around to see if other schools wanted him, but the interest was initially minimal.

Belknap had long wanted to be a firefighter in his hometown of Henderson, Nevada. Maybe this was his chance to begin that career.

“I was enjoying life after college,” he said. “But I just felt like some part of me was missing.”

Belknap had known something was off, but he wasn’t entirely sure it was the absence of football. He didn’t realize that until he found himself talking with one of his friend’s fathers.

Belknap reflected on those words. He again contemplated the idea of giving it one more go.

Not that long afterward, he heard back from Montana, a school where he had multiple connections. He was offered a scholarship and couldn’t pass it up, turning down FBS Charlotte.

“It was very serendipitous,” he said. “Everything just fell into place and felt right.”

Belknap had gotten in contact with UM coaches through former Griz quarterback Dalton Sneed, who shares a mutual friend in Christian Lopez, a Las Vegas native and former North Alabama quarterback. He also had been teammates with current Griz safety Gavin Robertson at Arizona.

Belknap even knew Griz coach Bobby Hauck because he went to high school with Hauck’s two oldest daughters and played there with Hauck’s son and current UM safety Robby Hauck. Bobby had looked into recruiting Belknap to UNLV when he was the head coach there but passed on him before leaving for San Diego State to be an assistant coach.

“We ended up not going on him, which I see now was a mistake,” Bobby Hauck said. “I always loved his personality, his energy, how he played. That in and of itself made it a mistake to not recruit him. It’s nice to get a second chance.”

Belknap wanted to return for that sixth year of football because he suffered an injury his junior season in 2018, missed all but two games that year and was limited in his production in 2019.

He had fractured his fifth metatarsal, the bone in the middle of his foot connected to the pinky toe. The surgery left him using a scooter and crutches for nine weeks after all the hard work he had put in before the season.

“I was down in the dumps,” he said. “You get depressed when you can’t do the thing you love.”

Not highly recruited out of high school, Belknap walked on and redshirted at Arizona in 2015 under coach Rich Rodriguez, earned a starting spot in 2016 and received a full-ride scholarship before starting again in 2017. That helped keep him at Arizona because he didn’t think it’d be possible to pay about $40,000 in tuition while doing all the required football activities throughout the year.

Belknap became a team captain when Kevin Sumlin was hired in 2018. After two years, he wanted to come back but wouldn’t have a scholarship. He had to look elsewhere, applied for a medical redshirt to get back the year of eligibility he missed and landed at UM.

“I became stronger because of that adversity,” he said. “It caused that fire and that spark to want to get back and prove I could still play.”

Belknap found motivation over the years from his family, specifically his father, mother, brother and grandmother. They had moved to Las Vegas from Spokane when he was about 2 years old, putting them on an island from their extended family.

Belknap learned how to be tough from his brother Jeff, who never took it easy on him when they played sports. His father and mother got him started in sports when he was a kid, although he never considered college football until a growth spurt before his junior year of high school.

His tattoos of Thor’s Hammer and a world tree pay homage to his family’s Norwegian and Swedish heritage. His mid-length blonde hair even makes him look like Thor. It’s the nickname his high school coach at Coronado, Brad Talich, said he heard other coaches use when Belknap played there from 2011-14.

Talich is more apt to describe Belknap as “country strong” despite being from the city. One instance of that strength that stands out to Talich was when Belknap moved from defensive end to defensive tackle against rival Green Valley and dominated the offensive linemen like he was playing a position he had known all his life.

“He had that reputation for being a real tough kid,” Talich said. “Just a no-nonsense, get-after-it type of player.”

No wonder he was able to attack his rehab from that 2018 injury with such ferocity. And no wonder he fits in with the toughness and style of play Bobby Hauck wants from his defenders.

Talich is glad to see Belknap finally land with Hauck.

“I don’t want to say it’s a marriage, but Montana is the perfect match for him,” he said. “It’s a place he’s going to thrive.”

Belknap came to Montana anticipating being in Missoula for only six months.

When he transferred, the Big Sky hadn’t yet delayed its fall 2020 season to the spring because of the pandemic. The NCAA granted all athletes an extra year of eligibility, so Belknap had to decide again if he wanted to lengthen his college career.

He already had friends getting married and having kids. But he realized that free school and football wouldn’t be around forever.

Then he came to another realization as he spent 2020 in Missoula.

“I’ve been around a lot of players, and I realized these guys are special because of how seriously they take everything and how they play for each other,” he said. “They were guys I wanted to be around and were willing to stick out a whole year for just to play with them.”

Belknap started out as a third-string linebacker but was moved to defensive end to help fill depth. He’s never left, having earned a starting spot heading into this season.

His highlight so far has been an interception returned for a touchdown against Cal Poly. It was telling how excited his teammates were for him to make that play and how much Bobby Hauck beamed when talking about it.

“He’s a guy that it feels like he’s been part of our team forever just because he fits in so well,” Robby Hauck said. “He’s our kind of guy: a hard worker, a tough guy, willing to put his body on the line.”

He's even recognized by those on the other side of the ball. Montana quarterback Cam Humphrey has appreciated Belknap for his genuine nature.

“He’s really aggressive and passionate about the game on the field, but off the field, he is one of the best people you could ever meet,” Humphrey said. “He’s always starting conversations, always happy, always lively, in a good mood, always seeing how you’re doing. I don’t think he’s ever walked past me without saying hello.”

It’s not surprising Belknap has maturity because he’s already 24 years old. He also brings knowledge and wants to help the younger guys along.

Belknap knows this is his last year in college, so he’s learned to play with a reckless abandon because every play could be his last.

“He loves to play, and it shows,” Bobby Hauck said. “He’s not afraid to exhibit that. His teammates love him. His coaches love him. Like anybody with a lot of energy, their personality is infectious.”

That Belknap still has the love for football after seven years is recognized by UM defensive tackle Eli Alford.

“He’s always happy to be out here,” Alford said. “You can tell he loves the sport. So much so that it fires not just him up but the rest of us up. That he’s still got the energy and intensity he has, it’s impressive.”

It sure seems like Belknap found just what he needed when he spent all those months at home.

“As of right now, I can look back and say it was already worth it,” Belknap said. “Just to create the relationships with the coaches and guys even off the field, it’s something that if I didn’t play another game, god forbid I broke my leg, it was still worth it just to be around these guys.”

Members of Montana's 2001 national championship team have raised nearly $300,000 for the athletic department ahead of this weekend's 20th-anniversay celebration.

Montana cornerback Justin Ford etched his name alongside Griz great Trumaine Johnson Saturday, showing why he was so highly sought after coming out of junior college.

Facing a team that uses two quarterbacks is becoming a trend for Montana this season. But Sacramento State's pair of QBs is unique from the previous ones the Griz have faced.

Montana Grizzlies still 'a work in progress' despite 4-1 record, No. 5 national ranking

Bill Speltz: Montana Grizzlies save face after sluggish half against Dixie State

MISSOULA — The anxiety and concern were uniform across the board for Griz Nation at halftime of Saturday's home football game.

Eureka grad Garrett Graves is finding his home at safety after he began his Montana career at quarterback and also played some running back and wide receiver. 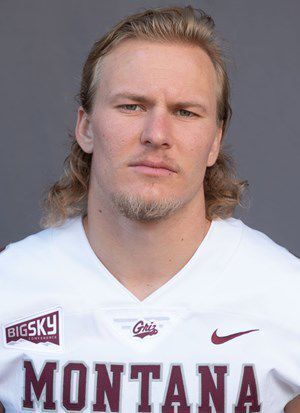