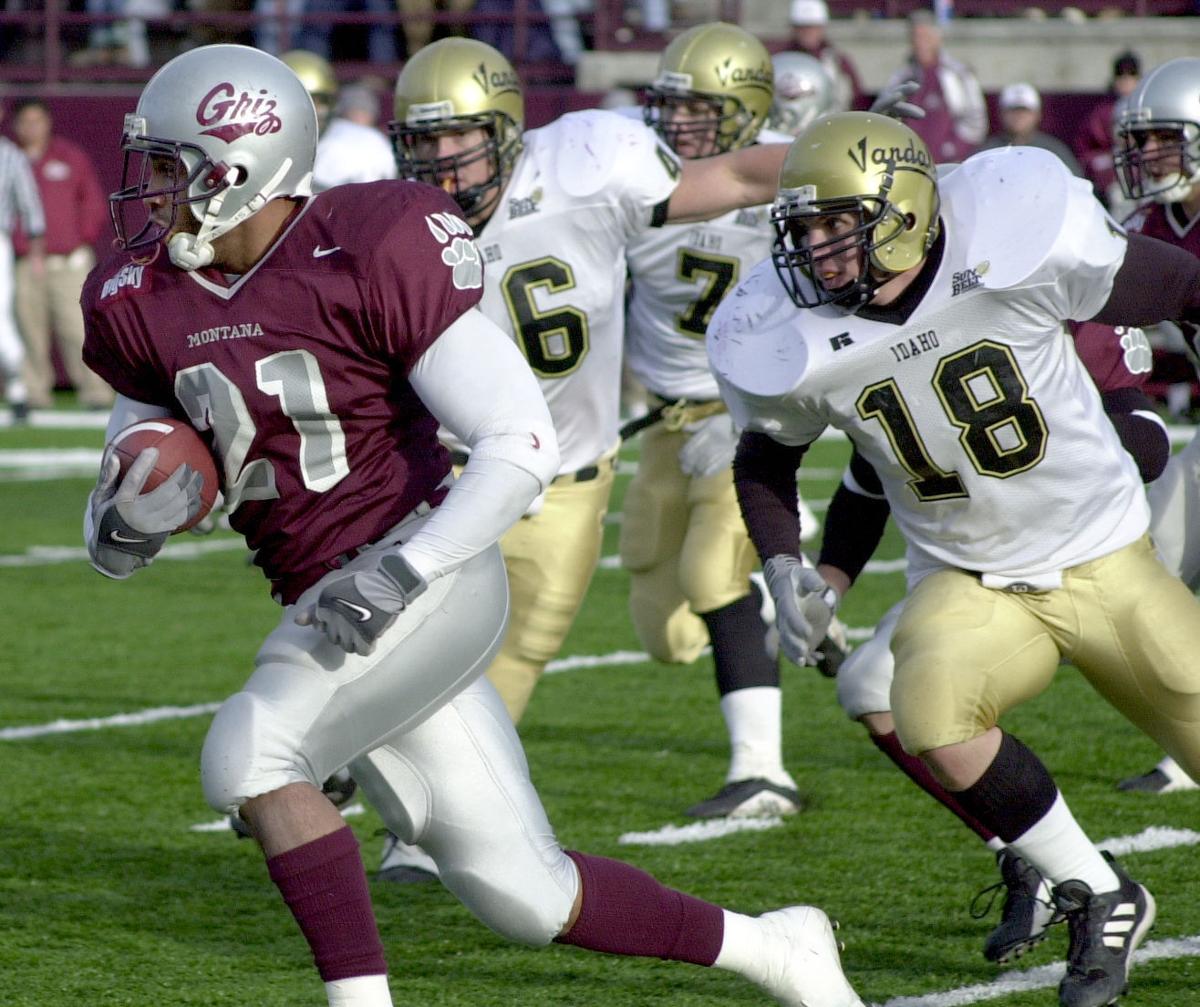 Montana running back Yohance Humphery breaks away from a band of Idaho pursuers in a 33-27 double-overtime win in 2001. The 2001 national championship team will be celebrated for its 20th anniversary at the Grizzlies' game against Sacramento State on Saturday at Washington-Grizzly Stadium. 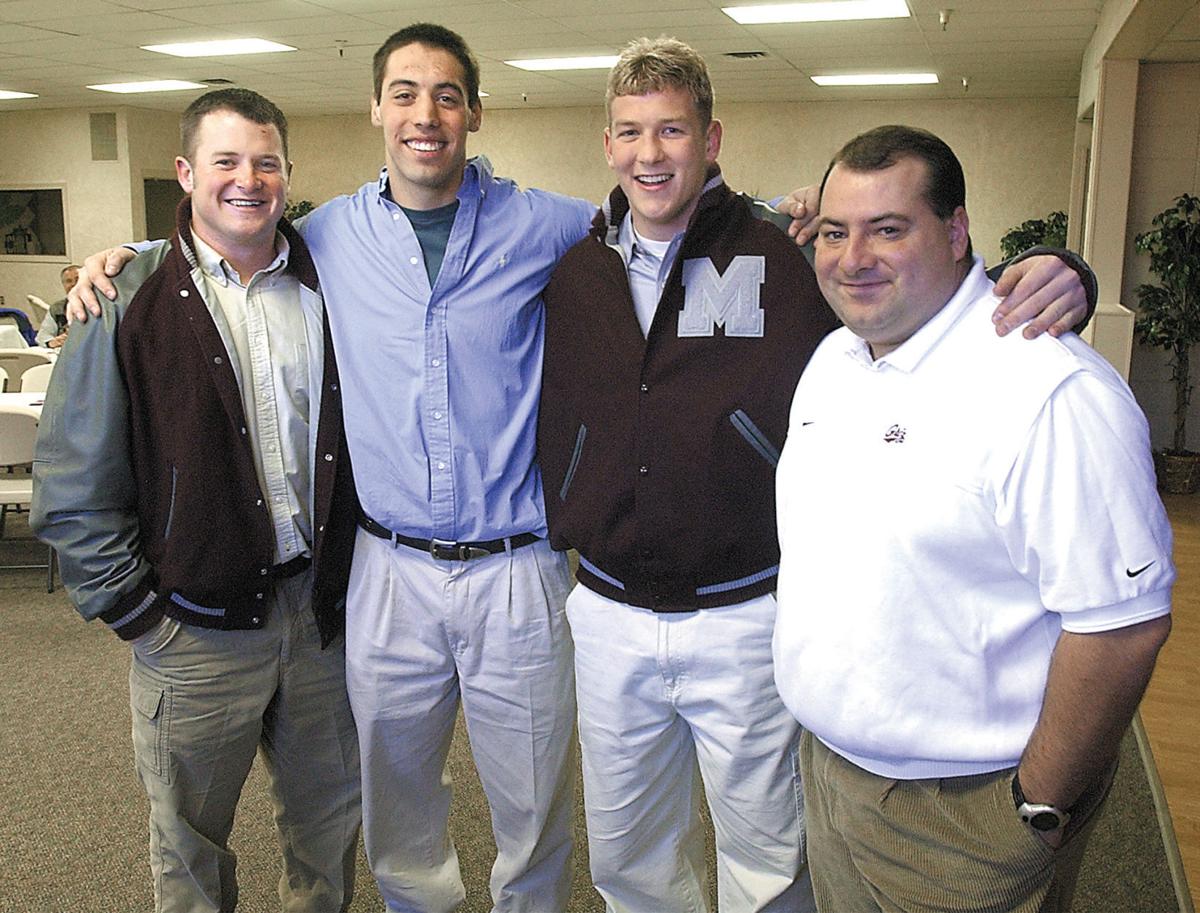 These four young men from the University of Montana were members of the 2001 NCAA Division I-AA championship football team. From left are Dan Orizotti, Ciche Pitcher, Chris Connors and Lance Robinson, who was the team’s defensive line coach. Orizotti was a Butte Central graduate, Connors and Robinson both attended Butte High, and Pitcher graduated from Anaconda Senior High School. 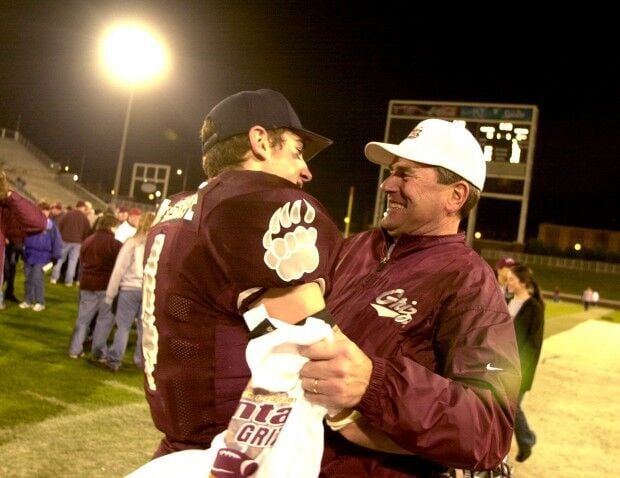 Montana head coach Joe Glenn celebrates with free safety Dave DeCoite after Montana won the national championship in 2001. Glenn returns to Missoula on Saturday, when he and the 2001 team will be recognized at the Grizzlies' game against Sacramento State.

The 2001 FCS champions have raised nearly $300,000 to endow a scholarship and help with initial funding for an indoor practice facility. They’re nearing that goal as they prepare for their 20-year anniversary celebration this weekend when the Griz host Sacramento State.

An indoor football facility helps put the Griz on a more even playing field with FCS powers such as North Dakota State, South Dakota State and North Dakota, which all also deal with severe winter weather conditions. SDSU opened its facility in 2014 at a cost of $32 million, UND in 2015 and NDSU has been working on its since 2018 at a reported cost of $35 to $40 million.

Unlike those permanent buildings, UM’s is expected to be a temporary bubble structure, which NDSU has had since November 2014. An indoor facility has been part of the master plan on campus, and facilities were one of the items Hauck highlighted at the 2020 Big Sky Football Kickoff as being needed to overtake NDSU, which won eight FCS titles in the 2010s.

“We need to fund our programs like they’re funding theirs,” he said. “They’re building facilities. They’re paying full cost of attendance. They’ve got their guys there, and they’ve got staffing, they’ve got nutrition. They’ve got all the things that all the big-time football programs have. So, it starts with that. Then you’ve got to keep recruiting and developing your players. You don’t overcome something like that overnight.”

UM is in the early planning stages. Haslam said the athletic department identified a location on the Riverbowl fields, talked that through with campus officials and started work to see how the facility would look and fit. They need to continue increasing funding so they can have a better plan before going to the Board of Regents for approval on the expenditure.

The bubble would cover an artificial-turf field and can be taken down when the weather is nice, Haslam said. A permanent structure is required in the form of a support building for electrical, restrooms, an entryway and a way to keep the bubble pressurized. It’ll be used primarily by football but for other sports and by the community as well.

Ideally, Haslam is hoping to have the indoor facility done around this time next year. That’ll be driven by how quickly the required money from donors is raised. They’re still fine-tuning a final price tag before making that number public, but the gift from the 2001 team will help with the ongoing initial planning work with engineering and architecture.

“Might cause a little jealousy they never had one and were out practicing in the snow,” Haslam lightheartedly said of the 2001 team. “But they seemed to do OK with that.”

The 2001 team will also be endowing a scholarship to be presented to a current member of the football team annually. The scholarship is in memory of Tim Bush, Curt Colter and Herb Fernandez, a trio of sophomores on that championship team who died young.

Bush died in a mining accident in 2010. Colter passed of heart disease in 2012 at 33 years old. Fernandez had an autoimmune disease and lung inflammation in 2020 at 40.

“The biggest thing for me was their passion,” said Dan Orizotti, a linebacker on the 2001 team. “They had such a great excitement and energy about them. It just radiated off them. Even though they were young, they were sophomores when we were playing, but all three of them had big impacts. That’s both on and off the field.”

Orizotti has spearheaded the fundraising and reunion efforts. He’s worked alongside a core group of his teammates from that 2001 squad: John Edwards, T.J. Oelkers, Jason Francis, Vince Huntsberger, Trey Young and Dylan McFarland.

Orizotti said Tuesday the fundraiser was at about $285,000 as of a few days ago but more donations are still being finalized. While they were aiming for $300,000, he’s hoping they could get closer to $350,000 before Saturday’s game.

“It’s a great honor to represent the university,” he said. “To be asked back and get that recognition, so many guys are very excited about it. It’s just going to be fun to catch up and tell stories. We’re excited about coming back together.

“We also appreciate the platform to also give back to future generations. I know people were very excited to pitch in and do that, just giving back to the school that has given us so much both personally and then helped with our professional careers.”

The 2001 team got the idea to raise $300,000 because that’s what UM’s first national title team did. The 1995 team made a $300,000 donation toward the state-of-the-art Champions Center, which opened in 2017 as another critical piece in helping the Griz once again be competitive on the national stage.

The locker room will be named in honor of the 2001 team, similar to how the 1995 team has a meeting room in the Champions Center named in its honor. They’ll have a get-together for players Friday and then be honored at the game Saturday.

“I think it’s critical to remember our past,” Haslam said. “I just think it’s a critical part of what makes college athletics so much fun. Honor the past and use that to help you focus on the future. These are men that had a great impact on this university, and they deserve to be recognized, deserve to get back together.”

UM holding its celebration against Sacramento State means Andy Thompson, a linebacker on the 2001 national champion team, will get to attend. He’s been the Hornets’ defensive coordinator since 2019 after he spent 13 years at Northern Arizona under former Griz assistant coach Jerome Souers.

Over 50 formers players, then-head coach Joe Glenn and then-athletic director Wayne Hogan are expected to attend, Orizotti noted. Players who were sophomores or younger on that team would’ve still been in the program when Hauck took over in 2003.

Sacramento State’s coaching staff also includes two other former Grizzlies. Kraig Paulson, the defensive line coach, played fullback from 1983-86, started the tradition of passing on the No. 37 legacy jersey and was roommates with Hauck at UM. Jeremy LaPan, the special teams coordinator and tight ends coach, was on the 2011 Griz team that made the semifinals.

The Griz will be wearing throwback jerseys for the game. They are in a similar style of the ones worn during that championship run. They also have a patch in the shape of the state of Montana, with the Griz logo and words “2001 national champions” within the state’s border.

“So a lot of people have been asking me and making assumptions as to why I’ve decided to hang up my cleats from football and just want to make some things clear: For starters I will not be entering the transfer portal and have retired from football as a whole, I ‘ve always told my self that I do not want to go to another school besides UM to play football and have stuck by that,” he wrote in a note attached to his tweet.

“Secondly, it was a decision made by me and I still love the football program and have a huge amount of respect for the coaching staff and my old teammates who are all still my very good friends. Everyone has to walk away from the game of football at some point in their life and it was my turn to hand in the jersey.

“After playing this game for 17+ years, all the way through elementary school until almost my senior year in college I will say that I wouldn’t change anything. Football has taught me so much and will carry those lessons throughout what ever journey is in the next chapter of my life. I was able to either play in, be around, and or experience some of the best games of my life and I won’t forget that one bit. With that being said – Go griz.”

The 4-1 Montana Grizzlies are hosting 3-2 Sacramento State who come into Washington-Grizzly on a two-game win streak.

Montana's banged-up football team suffered a humbling loss Saturday. The team needs to get better on both sides of the ball to get back in the win column.

Montana hits the road for three of its next four games as it looks to rebound from two losses in its past three games.

Montana's defense has hit a rough patch after a dominant start to the season.

Just several months after flipping from Montana State to Montana, Billings Senior grad Junior Bergen is making an instant impact for the Griz as a true freshman.

MISSOULA — If the name Tyler Hobbs sounds familiar to you as a western Montanan, you're not alone.

MISSOULA — Montana was just about to squish the Hornets.

Montana running back Yohance Humphery breaks away from a band of Idaho pursuers in a 33-27 double-overtime win in 2001. The 2001 national championship team will be celebrated for its 20th anniversary at the Grizzlies' game against Sacramento State on Saturday at Washington-Grizzly Stadium.

These four young men from the University of Montana were members of the 2001 NCAA Division I-AA championship football team. From left are Dan Orizotti, Ciche Pitcher, Chris Connors and Lance Robinson, who was the team’s defensive line coach. Orizotti was a Butte Central graduate, Connors and Robinson both attended Butte High, and Pitcher graduated from Anaconda Senior High School.

Montana head coach Joe Glenn celebrates with free safety Dave DeCoite after Montana won the national championship in 2001. Glenn returns to Missoula on Saturday, when he and the 2001 team will be recognized at the Grizzlies' game against Sacramento State. 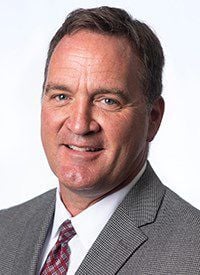