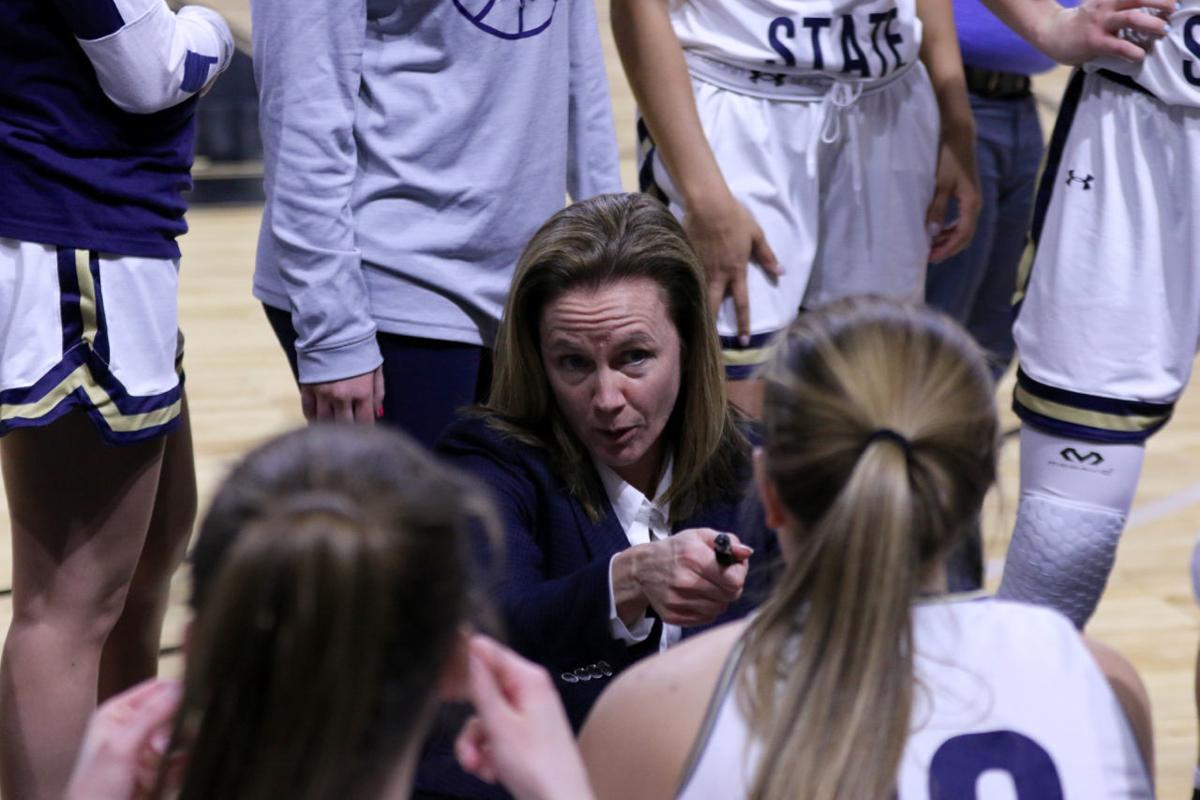 Montana State head coach Tricia Binford talks to her team during a timeout in the Big Sky Tournament semifinals against Northern Arizona on March 11, 2020, in Boise, Idaho. 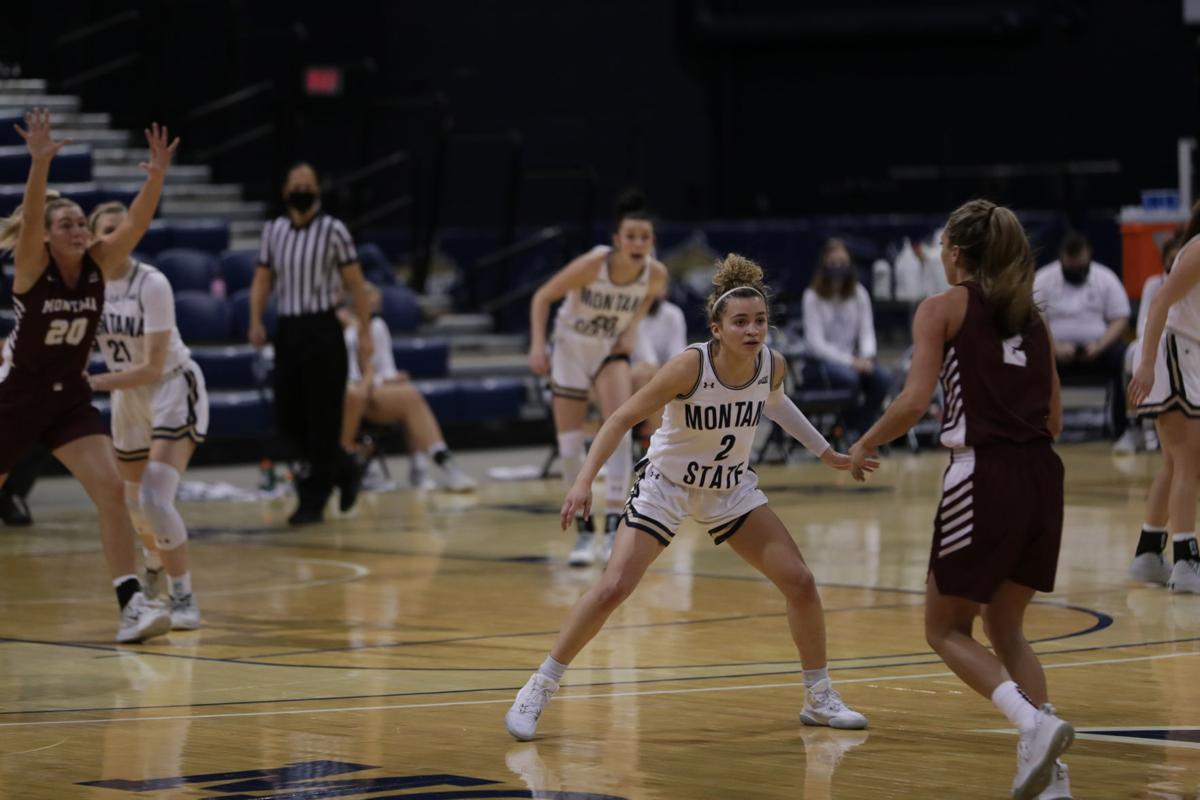 Montana State had one of the youngest teams in the country last season.

Despite that, MSU went 17-7 overall and 13-3 in the Big Sky a year ago en route to the third seed and a trip to the conference semifinals. It is head coach Tricia Binford’s hope that with a season of experience, the Bobcats are ready to take the next step in their development.

MSU released its full 2021-22 schedule on Monday, and the 11 nonconference games featured on it are sure to challenge the Bobcats as that progression continues.

“There’s not an off night for us to not come out of the gate ready to go,” Binford said.

The schedule includes four NCAA Tournament teams from a season ago — Gonzaga on Nov. 11, South Dakota State on Nov. 18, Utah Valley on Dec. 11 and BYU on Dec. 21. The latter two will be home games at Worthington Arena. Including Big Sky tournament champion Idaho State, the Bobcats will face five teams that played in the sport’s most prestigious postseason.

MSU’s season will also feature road games at UNLV (Nov. 13) and North Dakota (Nov. 20), along with an appearance at Cal Poly’s post-Thanksgiving tournament in San Luis Obispo, California. There, the Bobcats will face North Texas (Nov. 26) and the host Mustangs (Nov. 27).

The out-of-conference schedule consists of five home games and six road or neutral games against what Binford believes will be the best competition to prepare the team for the rigors of Big Sky Conference play.

“BYU and Gonzaga, obviously they’re both regional, they’re both fairly easy to get to and they’re both super respected opponents that are typically playing in the postseason,” Binford said. “That’s a great level of competition for us to be challenging ourselves against on a consistent basis.”

The games against SDSU, Gonzaga, North Dakota, Utah Valley and BYU are all continuations of home-and-home agreements in recent seasons. Similarly, Seattle was scheduled to be in Bozeman last season, but the COVID-19 pandemic pushed the contest to this year.

Binford said the Big Sky has an agreement with the Big West Conference to arrange matchups with some of its teams. That is how UC Davis came to play in Bozeman two seasons ago and how MSU ended up at Cal Poly this year.

Binford said her team has played in the Mustangs’ Thanksgiving tournament in previous years, and it is lucky to do so again this season because it allowed the Bobcats to pick up another game without much travel. Montana State has never faced North Texas in women’s basketball.

MSU is 0-2 all-time against UNLV, with the most recent of those games coming in 1988. UNLV went 15-9 overall last year and welcomed in former Stanford assistant Lindy La Rocque as head coach in March. Binford said she reached out to the school in hopes of finding another opponent in a quality conference (Mountain West) to play in the same week as Gonzaga.

“We now have a little bit more season under us,” Binford said of her youthful team. “We need to feel we can beat these teams.”

She highlighted South Dakota State and North Dakota as tough opponents that will likely create loud atmospheres on the road. MSU split against those teams — winning against UND but losing to SDSU — at home last year.

Binford said MSU had some trouble scheduling its home opener against Carroll because MSU’s Worthington Arena will be hosting the state high school volleyball championships that week. But the schools ultimately agreed to a weekday game, and Binford said she’s looking forward to facing an experienced Saints squad that is returning several players from last season’s team that went 21-3, won the Frontier Conference and made the NAIA national tournament.

MSU will also host an exhibition against South Dakota Mines, a Division II school, on Nov. 6.

All of it is building toward Big Sky play. After a year of weekend doubleheaders against the same opponent to cut down on travel and COVID-19 concerns, the league schedule returns to normal this year with two different opponents each weekend.

Binford is hopeful that arrangement excites fans, who will also be welcomed back into Worthington Arena and surely other venues across the conference.

The Bobcats have home games against Big Sky foes Northern Colorado and Sacramento State on Dec. 2 and 4, respectively, and then have five nonconference games through the rest of December. Conference play begins again with a trip to Weber State on Dec. 30 and Idaho State on Jan. 1.

Though the Big Sky slate will present its own challenges, Binford said she’s not getting ahead of herself.

“My eyes go to making sure that we’re ready for every game,” she said. “I still feel like our team is somewhat young, and I need to keep them in the present and not look any further ahead of that. Because with all the changes in this conference, if you’re not ready to go every single night someone is going to surprise you.”

Montana State head coach Tricia Binford talks to her team during a timeout in the Big Sky Tournament semifinals against Northern Arizona on March 11, 2020, in Boise, Idaho.