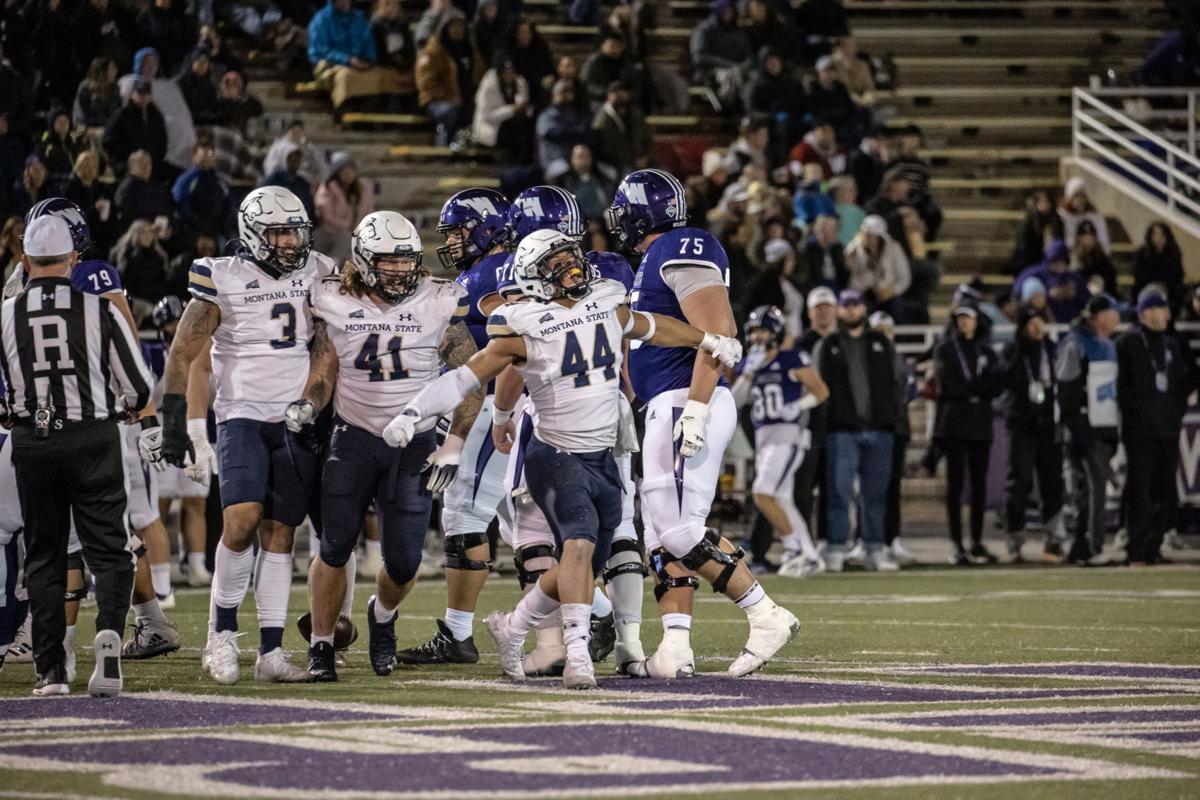 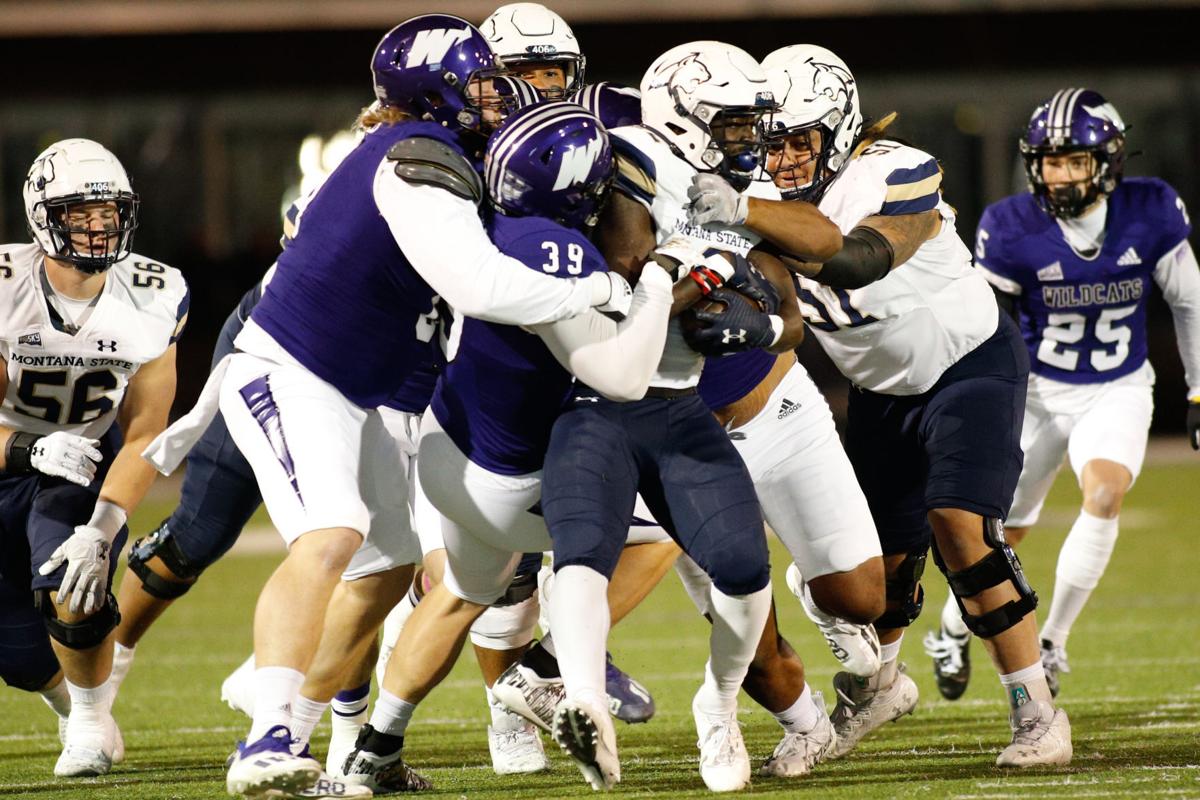 Montana State running back Isaiah Ifanse is stopped by multiple Weber State players during their game at Stewart Stadium in Ogden, Utah, on Friday, Oct. 15.

OGDEN, Utah — A game at Valley Catholic High School (Oregon) was Daniel Hardy’s best ever, at least in his estimation. No. 2 was his performance in Montana State’s 13-7 win over Weber State on Friday night, the senior defensive end said after the game.

It’s hard to imagine Hardy being more impactful than he was in the No. 9-ranked Bobcats’ road victory over the No. 19 Wildcats. In a season full of huge hits and quarterback pressure, Hardy outdid himself.

“As a back end player it makes your job easy when you know the quarterback has about two seconds back there, and that’s max, or else he’s getting hit in the face by Daniel Hardy,” said MSU nickelback Ty Okada.

Hardy’s numbers from Friday are eye-popping, yet they almost understate what he accomplished.

He finished with eight tackles, three sacks and a forced fumble that was recovered by Troy Andersen. Two of those sacks were solo, and Hardy was credited for a half sack on two others.

The fumble Hardy forced led to a 46-yard field goal from Blake Glessner that put the Bobcats ahead 10-7 with 7:42 left in the third quarter.

On the fumble, WSU quarterback Bronson Barron escaped the pocket and rushed for three yards. Hardy caught him from behind, delivered an uppercut to the ball and sent it fluttering. Hardy thanked MSU assistant defensive backs coach Kyle Risinger.

“All I could hear was coach Risinger in my head saying, ‘Takeaway week,’” Hardy said. “We talk about that all the time. When you tackle, throw the hammers and try and pop that thing out. That’s just practice taking over.”

This guy is all over the place!

Hardy strips the ball and the Bobcat defense forces the turnover!

The Wildcats scored their only points on a game-opening 97-yard drive. They weren’t stonewalled after that, finishing with 269 total yards. But seemingly every time they gained some momentum, Barron was hounded in the backfield, and MSU got the ball back.

WSU punted seven times, went 2 for 13 on third downs and failed to convert any of its three fourth-down attempts.

“There were times we had stuff wide open and didn’t have time to get the ball off,” Wildcats coach Jay Hill told reporters. “We had receivers twice tonight for wide-open touchdowns and get sacked.”

Seemingly every time Barron was pressured, Hardy was in the middle of it, as he’s been all fall. He now has eight sacks, 33 tackles and 13 ½ tackles for loss in seven games.

“We’ve got some dogs. Chase, Amandre, Sea Bass, those guys were all over the quarterback today,” Hardy said. “I finished a few of them, but they were making his life hell today. So all props to them. I can’t do my job if they don’t do theirs.”

But Hardy’s job is hardly easy. Many pass rushers have complementary teammates. Few look as fearsome as Hardy did on Friday.

The Weber State game was the first MSU has played on a Friday all season, so the Bobcats had one fewer day of rest than normal. It was on the road. WSU was coming off a bye.

None of that seemed to affect MSU’s defense. In fact, it looked better as the game progressed.

As they’ve done all year, the Bobcats continued to use many reserves, mainly on the defensive line. It’s not a coincidence that Hardy and his fellow D-linemen were the biggest stars of the game.

“When we can keep guys fresh and they can be running Mach 1 in the fourth quarter, that makes a big difference,” Vigen said. “Their same five O-linemen were probably out there the whole game, and our guys were coming on and off the field. So credit to our coaches for building depth, trusting guys, and obviously it played out big for us in the second half.”

Hardy and Williams start at defensive end, with Benson at nose tackle and Blake Hehl at the other tackle spot in MSU’s 4-2-5 scheme. By the fifth play of Friday’s game, all four had been subbed out.

Brody Grebe, who has been the right D-end on almost every third down this season, got several first and second down reps on Friday. He was joined by the usual cast of backups: Valdez, David Alston, Byron Rollins, Blake Schmidt and Ben Seymour.

Grebe and Seymour each recorded a tackle for loss on Friday, and Grebe finished with three total tackles. Valdez had a half sack.

“We tell those guys, ‘You’re not backups. You’re starters. You’re going in and you’re taking real reps,’” Hardy said. “There was one play where Ben set up the whole defense for that first sack I had because they were in third and long and they couldn’t get their run game going.

“Couldn’t appreciate those guys more, love them to death and I’m happy to see their improvement and progression.”

The D-line rotation would be even bigger if Kyle Rygg, the preseason starting D-tackle, was healthy. He’s been out since suffering an injury in the season opener.

On Friday, the Bobcats lost another starter: sophomore cornerback Eric Zambrano (Vigen said he didn’t know the extent of the injury). The other starting corner, James Campbell, missed his third straight game with his own injury.

MSU’s strong pass rush has certainly aided the ailing secondary, but true freshman Simeon Woodard has been solid all season, including Friday. Zambrano’s replacement was Tyrel Thomas, who returned from a fall camp knee injury last week against Cal Poly. Thomas, a senior, started games at corner in his first three seasons at MSU and was slated to be the starting nickelback before his injury.

Even at corner, perhaps MSU’s shallowest position, MSU entered Friday’s game with a proven starter on its bench.

“Tyrel got enough reps last week where he was game ready, he was ready to go the long haul, and he did that tonight,” Vigen said. “Proud of him coming back through this.”

MSU rushed the ball 20 times and attempted nine passes in the first half. The Bobcats were solid on the ground, tallying 95 yards in the half, although 64 came on three rushes: a 26-yarder from Elijah Elliott, a 20-yarder from Tommy Mellott and an 18-yarder from Isaiah Ifanse.

That 18-yard run was up the middle, and it was an outlier. Of Ifanse’s 23 other runs up the middle, none reached 10 yards, per WSU’s play-by-play log. Only two of those rushes topped four yards.

Ifanse finished with 82 yards on 25 carries (3.2 ypc). His one non-middle rush was to the right, and it went for eight yards.

McKay completed 12 of 19 passes for 76 yards and several off-target throws, including one that was nearly intercepted in MSU territory with 10:30 left and the score 13-7.

Considering the listless passing game and poor field position (four drives started within the MSU 10-yard line), it made sense to give the ball to the reliable Ifanse, not try to force passes that weren’t there and let Hardy and Co. go to work. WSU has one of the toughest defenses MSU will face all season.

“We’re more capable on offense, production-wise, than we showed,” Vigen said. “But that’s a good team, too. That’s a good defense. As the game went on, they were able to put more pressure on us up front.”

But maybe WSU’s defense could have been punctured if the Bobcats didn’t opt to run the ball up the middle on more than half of their plays.

“We certainly want to be balanced. It wasn’t in the cards for us tonight to have that explosive night,” Vigen said. “We’ve got to keep improving offensively, there’s no question about it, but I know we’re a team that can win by leaning on its defense, too, and that was evident tonight.”

Montana natives come up clutch as No. 7 Griz ride defense, special teams to win over No. 3 Montana State

Montana rides its defense and special teams to a 19-point win over Montana State, snapping a four-game skid in the rivalry.

Snyder will join a roster with two other players from Butte.

The Bobcats received a first-round bye and will host their first playoff game.

The senior from Dillon came back from an injury.

MISSOULA — As Troy Andersen dove to intercept a pass, Montana State suddenly appeared to have a chance to keep its winning streak against its rival alive.

Vigen is the son of MSU's first-year head coach.

Live coverage: No. 7 Montana hosts No. 3 Montana State in the 120th Brawl of the Wild

The Montana freshman had a long TD catch and several long punt returns against MSU, the program he originally signed with.

A Big Sky team hasn't won a national title since 2010.

Andersen has earned all-American honors on offense and defense.

Montana State running back Isaiah Ifanse is stopped by multiple Weber State players during their game at Stewart Stadium in Ogden, Utah, on Friday, Oct. 15.