Montana State's Tori Martell jokes with the other team before a game Feb. 4 at Worthington Arena. 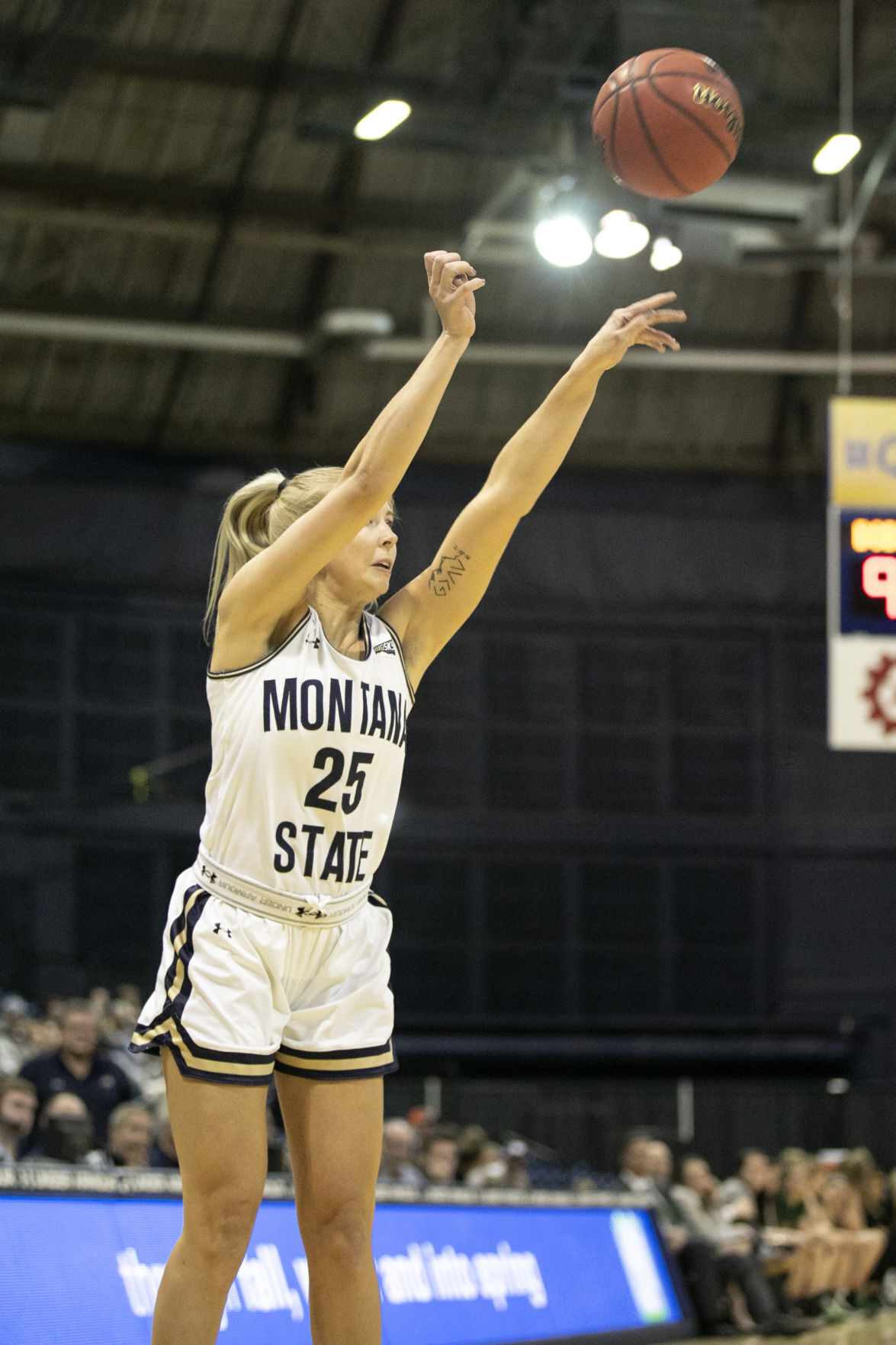 BOZEMAN — Tori Martell has made 195 3-pointers at Montana State. Her and teammate Sidney Zieske, who's considered a sophomore on MSU's roster, will graduate from Montana State this spring having enjoyed some of the greatest moments in program history.

But when Idaho was forced to cancel this week's series at Montana State, Martell and Zieske faced the possibility losing senior day to celebrate their accomplishments.

“Cole,” Jones said when asked where the idea of incorporating the MSU women’s basketball senior day into the weekend volleyball schedule originated.

“He texted me as (MSU’s weekly) head coaches meeting was starting and asked me to call him afterward,” Binford said of her first interaction with Jones, “so he’d already thought about it. My first reaction was how extremely thoughtful to include our team in your event, and he responded that we’re an athletic department and a family. They were feeling devastated for our kids not to have that moment, so they were thinking of ways to support our team.”

The MSU-Idaho women’s basketball series set up as a crucial weekend. Both teams are locked in a race for the Big Sky regular-season championship with Idaho State (13-2 against Big Sky teams after Thursday’s win at Montana). The Bobcats stand 11-3 in conference play, percentage points behind Idaho (13-3). The lost games could prove costly in the conference standings.

But it won’t cost Martell and Zieske and their families and teammates a moment of recognition. On Saturday, the Bobcats volleyball team, also locked in a chase for the Big Sky regular-season crown, hosted Portland State. During the match, Martell and Zieske received their moment.

“We had already been processing what our backup plans were as far as trying to get parents into practice and doing something on the video board after that,” Binford said. “When this option (was presented), we just thought, 'Let’s run with this.' This sounded like the best option to be able to recognize Tori and Sid and have some people see it as well.”

Jones said there was no hesitation in welcoming the women’s basketball program into the fold.

“To me, women’s basketball sets the tone of excellence for the athletic department in our building,” he said. “Kids like Tori and Sidney have poured their heart and soul into that program, so to me it’s like the athletic department honoring them as much as the women’s basketball program. It’s a privilege to be able to say, 'Let’s make sure we recognize them.' It’s a great thing.”

Martell and Zieske have traveled different paths during their Bobcats careers, and Binford appreciates that every athlete’s journey is unique.

“Every kid has a different story that you’re extremely proud of,” Binford said.

A 5-foot-8 sharpshooter from Somerset, Wisconsin, Martell contributed early in her Bobcats career. She shot 40% from 3-point range as a freshman, playing in 30 of the team’s 31 games, and a season later averaged 7.2 points while playing in all 29 games.

Last year, her role expanded on one of the greatest Bobcats teams of all time, as she averaged 8.1 points a game and earned Big Sky top reserve honors. As a senior, Martell is second on the team with 12.3 points a game and her 53 3-pointers leads the Big Sky.

“Tori just finished her last game (at Worthington Arena) with one of the most memorable shots in program history,” Binford said of Martell’s game-tying 3-pointer that sent the Bobcats into overtime against league-leading Idaho State in a contest MSU eventually won. “She’s one of the best shooters in program history, is potentially an all-conference performer.”

Zieske’s journey has spent less time in the spotlight. The 5-9 guard from Waconia, Minnesota, redshirted in 2018-19, then played in 18 games as a reserve in 2019-20. This season, she has played in six games.

Academically, Zieske has shined. The exercise science major is graduating a year ahead of schedule this May.

“Sidney is that kid that’s maybe gone under the radar in shining moments in the papers,” Binford said, “but not for the shining moments with her peers. She’s been a tremendous teammate. She’s selfless in doing her job on a daily basis. She’s gotten ahead and finished her degree in three and a half years, which is phenomenal.

"These two are great examples of what it means to be excellent on the court, in the classroom and out in the community.”

A week ago in a sweep for MSU volleyball against Idaho State, Jones and his program honored departing seniors Alexis Gorski and Hailey Merkes. Those athletes have been part and parcel of MSU volleyball’s rise to Big Sky contender.

“Whenever you have a senior leaving the program, they’ve put their heart and soul into it for the period of time they’ve been here,” Jones said. “Having the opportunity for their families to celebrate them, having the opportunity for the department and the fans and their team to celebrate them, is an important part of the collegiate athletic experience. When we were able to do it last week, it was emotional. It was a really special experience."

Binford was grateful for the opportunity to honor Martell and Zieske and thankful that her program produces memorable players.

“I think the culture (of the program) looks the same every year," she said, "even though every story is different.”

Jeff Welsch: Anti-trans legislators went searching for a problem, and now they’ve got one

The NCAA announced Monday it "supports transgender student-athletes" and will only allow states that are "free of discrimination" to host championships.

Reinalda is in the midst of a post-graduate year refining his play at Donar academy in Groningen, Netherlands.

Montana State might be closer to choosing its next starting quarterback.

“When we’re all on the same page and we’re all working together, I think great things can happen. I think this is the first step in many.” Montana State AD Leon Costello

Montana State football expecting to lean on depth at running back

Montana State appears to be loaded at running back heading into the fall.

Montana State had two all-around winners at its spring rodeo.

Battle was a top-100 recruit when he signed with Washington.

Hamilton and Schneider moved into the top 10 in the West Region.

Tickets to the annual spring scrimmage can be claimed beginning April 16.

Montana State's Tori Martell jokes with the other team before a game Feb. 4 at Worthington Arena.