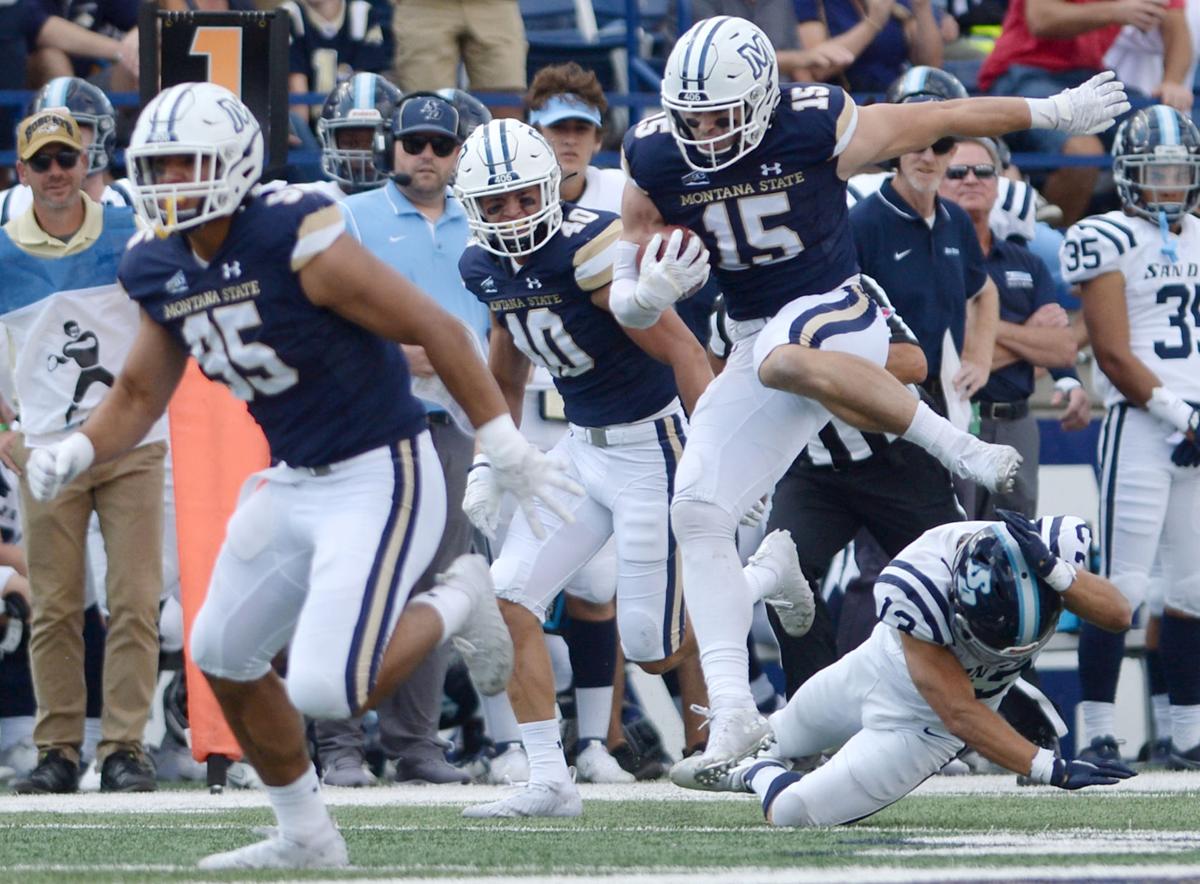 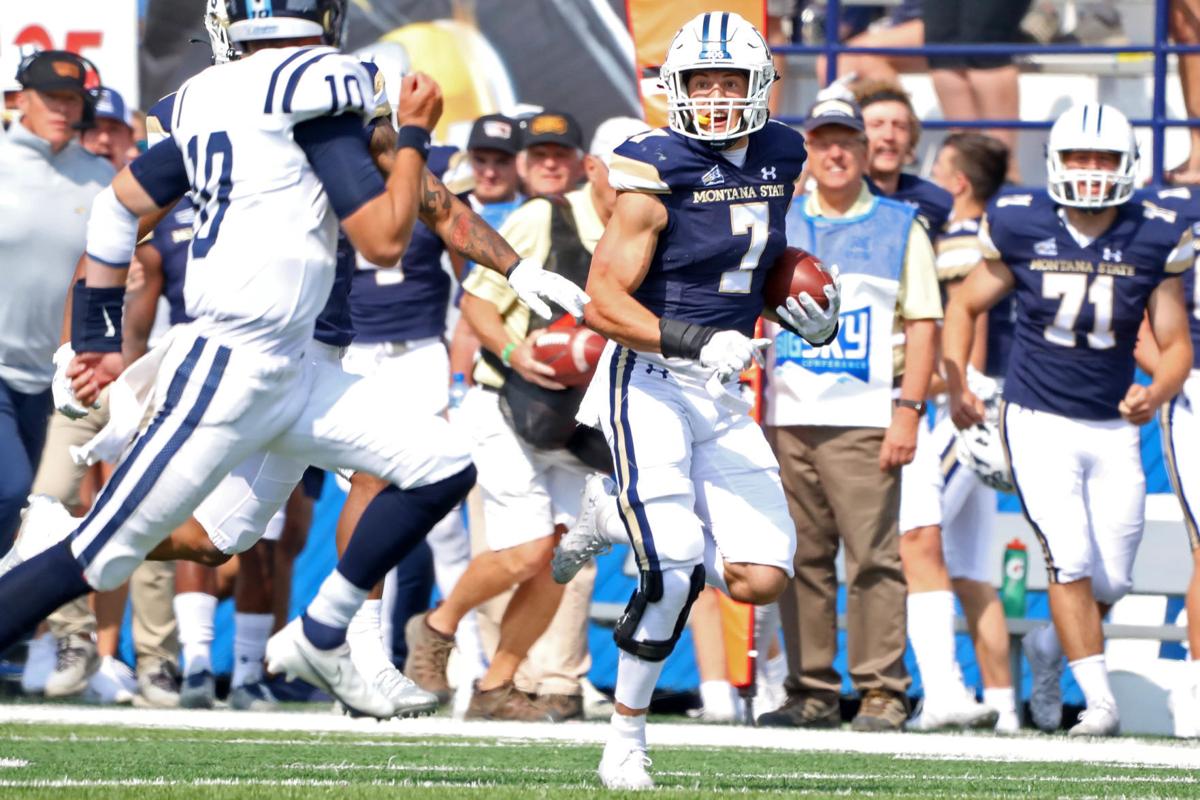 Montana State defensive back Ty Okada runs back an interception for a touchdown in the second quarter against San Diego on Saturday at Bobcat Stadium.

BOZEMAN — During Montana State’s 52-10 win over San Diego on Saturday, MSU defensive back Ty Okada decided to rub it in.

The redshirt senior went up to USD quarterback Mason Randall and provided one of the reasons why MSU’s defense was dominating.

Okada brought that up to illustrate how well-prepared the No. 13-ranked Bobcats were for Saturday's game at Bobcat Stadium. MSU (2-1) didn’t need to anticipate plays to handle the Toreros (0-3), who were 31½-point underdogs. Through their three-game nonconference slate, the Bobcats showed a high level of preparation no matter the stage or opponent.

“Still a lot of things we need to work on, but I love the discipline that we came into practice with this week. We were really focused on our task at hand,” said Okada, who is MSU’s starting nickelback. “When you prepare like that, it allows you to communicate and be one step ahead of the offense.”

Discipline is hard to measure, but one stat that reflects it is penalties. Three flags were thrown against the Bobcats on Saturday, mostly in garbage time, and one was a questionable pass interference call on strong safety Tre Webb. MSU committed five penalties (a couple of which were also questionable) in the season opener at Wyoming and drew three flags in last week’s 45-10 win over Drake.

One of those flags last week was on wide receiver Willie Patterson for celebrating his first career touchdown with a backflip, which MSU head coach Brent Vigen heavily criticized.

Vigen and defensive coordinator Freddie Banks are each in their first season at MSU, and they’ve made their values clear.

The Bobcats held USD to 204 total yards with 12 tackles for loss, three sacks and two turnovers, both interceptions that Andersen and Okada returned for touchdowns. MSU had a similar performance against Drake (228 yards allowed, eight TFL, three sacks, one turnover), and the defense was arguably the main reason MSU almost beat FBS Wyoming; the Bobcats allowed 347 total yards with five TFL, two sacks and one turnover in the 19-16 loss.

“Pleased with the defense at this point, for sure,” Vigen said. “We understand the scheme. I think our guys are playing within it.”

The Bobcats didn’t play last season because of the coronavirus pandemic, but neither the layoff nor the new coaching staff have seemed to hinder the defense, perhaps in part because so many of MSU’s defensive starters are veterans.

“Everybody’s got a job and they trust it and they trust each other and we’re doing it at 100 miles an hour,” Vigen said. “Our coaches are really preparing them each week.”

For all Andersen has accomplished, he had never returned an interception for a touchdown in his MSU career before his 40-yard pick-6 in the second quarter of Saturday’s game.

That’s largely because Andersen is in his first year as a full-time defensive player after starring at running back and quarterback in his first two seasons with the Bobcats, and he still had an offensive role in 2019. Against Drake, the middle linebacker from Dillon dropped an interception that he likely would’ve taken to the house had he caught it.

“I kind of wanted to make up for it,” Andersen said. “It’s always fun to run into the student section.”

Troy Andersen to the HOUSE with an interception return for a TD!

Bobcats up big over San Diego.

Andersen’s play happened less than 12 minutes after Okada’s 72-yard interception return for a TD, MSU’s first since Drummond’s Mac Bignell did it against Idaho State in 2017. It was not only Okada’s first pick-6 but the first interception of his Bobcats career.

Okada joked that Andersen stole his thunder a bit, but the Minnesota native was happy to share the pick-6 spotlight with his “great teammate.”

“I told Troy, ‘My pick was different.’ I got the ball and I did not know whether or not I was going to score. It took a few really good blocks to make that happen,” Okada said. “As soon as Troy picked it, I kind of just was jogging back to the sideline because I already knew, ‘It’s Troy Andersen. He’ll get it in the end zone.’”

PICK 6! Ty Okada to the HOUSE!#GoCatsGO

“They flipped the field a little bit, and then to completely kind of squash that and turn that around into a touchdown was huge,” Vigen said of Okada’s return. “Troy’s was a little shorter field, but he certainly showed that he’s pretty good with the ball in his hands.”

Those highlights took attention away from another big first-time play. Freshman running back Elijah Elliott scored his first-ever touchdown as a Bobcat on a 65-yard pass from Matthew McKay in the first quarter. Elliott showed off his speed on the play by outrunning two defensive backs.

“It was pretty wide open. Matt threw a good ball, I just caught it and was thinking, ‘Don’t get caught,’” Elliott said. “It was amazing. I’m just thankful to be on this team. They push me every day. It was just a great moment, just to share that moment with them.”

Drawn up to perfection 📝

The Bobcats didn’t suffer any injuries Saturday like the one to starting fullback RJ Fitzgerald, who suffered a painful-looking left arm against Drake and is likely to miss multiple weeks, according to Vigen. But MSU was far from full strength against USD, and it remains to be seen how many key contributors will play in their Big Sky Conference opener next week at Portland State.

One of MSU’s players out for the USD game was Tyrel Thomas, who was the first-string nickel before suffering a fall camp knee injury that required surgery. Vigen said Thomas had a chance to be activated last week, but the senior was once again in street clothes on Saturday.

So was redshirt senior offensive lineman Cole Sain, who also got injured in fall camp. He was active for the Wyoming game and got some playing time, but he went down on the final drive and hasn’t suited up since, even though he’s been listed as the backup center on each of the last three depth charts.

MSU captain and starting defensive end Amandre Williams was limited to third-down reps against USD because “he was a little dinged up,” said Vigen, who added that the injury is “nothing long term.” Sophomore Ben Seymour filled in for Williams at right D-end.

“He didn’t practice much this week,” Vigen said of Williams. “I think it was a good, sound plan to utilize him in those third-down situations, and preserve him moving forward was the biggest thing behind that.”

Second-string free safety Kendric Bailey wore a walking boot on his left foot and used a walking scooter to move around on Saturday. Bailey’s name didn’t come up in Vigen’s postgame press conference.

Wide receiver Nate Stewart and kicker Luke Pawlak have missed the first three games, and defensive tackle Kyle Rygg has missed the last two after suffering an injury in the season opener. Those three players, all slated to be first- or second-stringers before fall camp, will miss extended periods of time, per Vigen.

Tyrel Thomas and Tommy Mellott were two of several players to lead the Bobcats to Saturday's Big Sky win.

The 19th-ranked Wildcats will host the No. 9 Bobcats on Friday night.

McCutcheon has been MSU's top target, but other receivers have proven their worth in ways that don't show up on the stat sheet.

Montana State, Brent Vigen hopes, has maintained a high level of urgency for its past five games.

Recently activated Tyrel Thomas became one of many Bobcats to record a turnover this season.

Montana State defensive back Ty Okada runs back an interception for a touchdown in the second quarter against San Diego on Saturday at Bobcat Stadium.