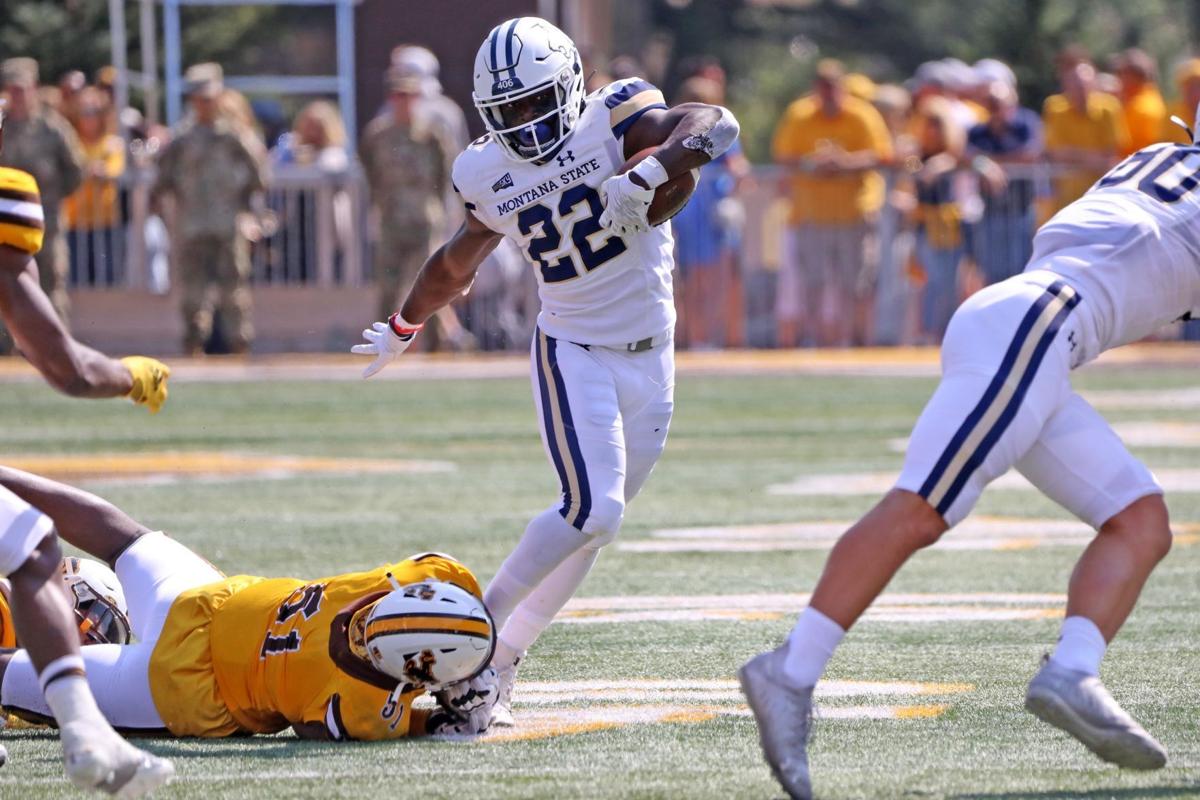 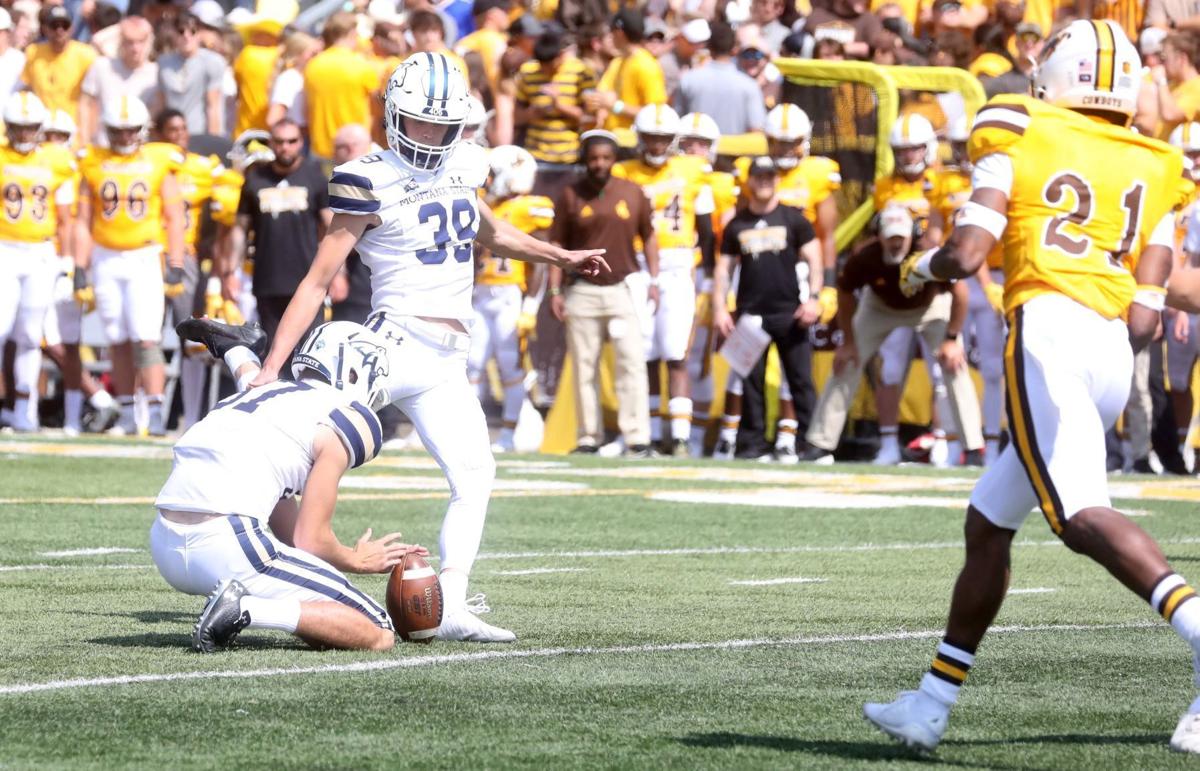 BOZEMAN — Last Saturday, the Montana State football team ended a long layoff with an encouraging but tough loss at Wyoming. The Bobcats will end a couple even longer droughts this Saturday.

MSU will host Drake in the Gold Rush game at 6 p.m. Saturday at Bobcat Stadium. It will be the Bobcats’ first home game in 638 days, a fact that excites the players and coaches. But they care more about ending a different 638-day break; that’s how long MSU has gone since its last win.

The Bobcats are ranked No. 11 in the latest Stats Perform FCS poll, while Drake is unranked. A win would be MSU’s first since Dec. 13, 2019 (24-10 over Austin Peay at home in the FCS quarterfinals), and it would be the Bobcats’ first Gold Rush victory since Sep. 7 of that year (38-17 over Southeast Missouri State).

“It’ll be a good test,” MSU first-year head coach Brent Vigen said Monday. “It’s easy to get up for your first game in a long time. It’s easy to get up for a game where you’re playing an FBS opponent. None of that can creep in. I know it’s Gold Rush, which I think will be exciting for our guys, our first home game in a long time, but we can’t look at it and say, ‘It’s not this bigger opponent.’ We need to have the mindset of getting better because we need to get better.”

Here are five things to watch when the Bobcats host the Bulldogs on Saturday night.

MSU entered last Saturday in need of game experience and left with loads of confidence. It’s hard to imagine the team that lost 19-16 to a well-regarded FBS squad feeling flustered against Drake, but the context is obviously much different.

The Bobcats were 19-point underdogs to the Cowboys, playing with low expectations in front of a road crowd. All of that will be flipped on Saturday.

A slow start against Drake shouldn’t be cause for concern. It could simply reflect some poor execution, which every team goes through. It could mean that MSU’s players are feeling some nerves, which would make them human and could easily fade away after a drive or two.

A strong start, on the other hand, would be another piece of evidence that the Bobcats deserve to be considered among the Big Sky Conference’s best. It also would reflect well on the ability of Vigen and his coaching staff to keep their players prepared and focused.

The Bobcats’ big d-line rotation is designed, in part, to keep the big guys as fresh as possible, ideally resulting in consistently solid, energetic line play throughout the game. That plan is only as good as the quality of the backups, and MSU’s coaches clearly trust many of them.

That depth took a big hit, however, when starting defensive tackle Kyle Rygg went out early in the second quarter. The redshirt junior from Oregon suffered a “lower-body injury that’s probably going to keep him out for a while,” Vigen said Monday. Tarleton State transfer Blake Hehl was bumped up to the starting role, and Missoula Sentinel graduate Byron Rollins will be the backup.

MSU junior running back Isaiah Ifanse was hardly invisible against the Cowboys (16 rushes for 103 yards, four catches for 33 yards), but Vigen wished he’d given his star tailback the ball more. Ifanse had two catches and no carries in the first quarter, and he got the ball eight times (all rushes) in the second.

Vigen’s second-guessing doesn’t mean Ifanse will receive significantly more touches against Drake, especially since Matthew McKay will be making his second appearance as MSU’s starting quarterback. But there’s a good chance Ifanse will at least be utilized differently this Saturday.

Any decent workload should get Ifanse past the 2,000 career rushing yards mark. He’s currently at 1,941 yards, good for 13th in MSU history.

There’s nothing necessarily wrong with that. McCutcheon, a Bozeman grad, proved he could get open and could make tough catches, so McKay had good reason to keep passing to him. The North Carolina State transfer also completed four passes to Ifanse and six to tight ends/fullbacks, including the go-ahead touchdown to Sunburst grad Treyton Pickering with 2:17 left, so the Bobcats weren’t overly reliant on McCutcheon.

MSU might try to feed McCutcheon even more against Drake. But that could lead to tighter coverage on McCutcheon, forcing McKay to find other options. He might keep throwing to running backs and tight ends in that case, but he’d likely target other receivers like veteran slots Willie Patterson and Coy Steel and/or starting “X” receiver Jaden Smith, who didn’t catch a pass and was rarely targeted at Wyoming.

MSU freshman kicker Blake Glessner attempted two field goals against Wyoming. The first, from 47 yards out, was blocked. Glessner drilled the second one from 53 yards, the longest field goal by a freshman in MSU history (sixth-longest among all MSU kickers).

Glessner wasn’t even listed as MSU’s starter until fellow freshman Luke Pawlak suffered an injury during fall camp. The Bobcats’ decisions to attempt those long field goals reflects their faith in Glessner, at least situationally.

Perhaps Glessner will get even more long attempts going forward, but the Bobcats won’t face many defenses as tough as Wyoming’s, so they might opt to keep the offense on the field more often in fourth down and short scenarios against Drake, even if they trust Glessner with 50-yarders.

The Montana State Bobcats are hosting Drake in their home opener as they play their traditional Gold Rush game.