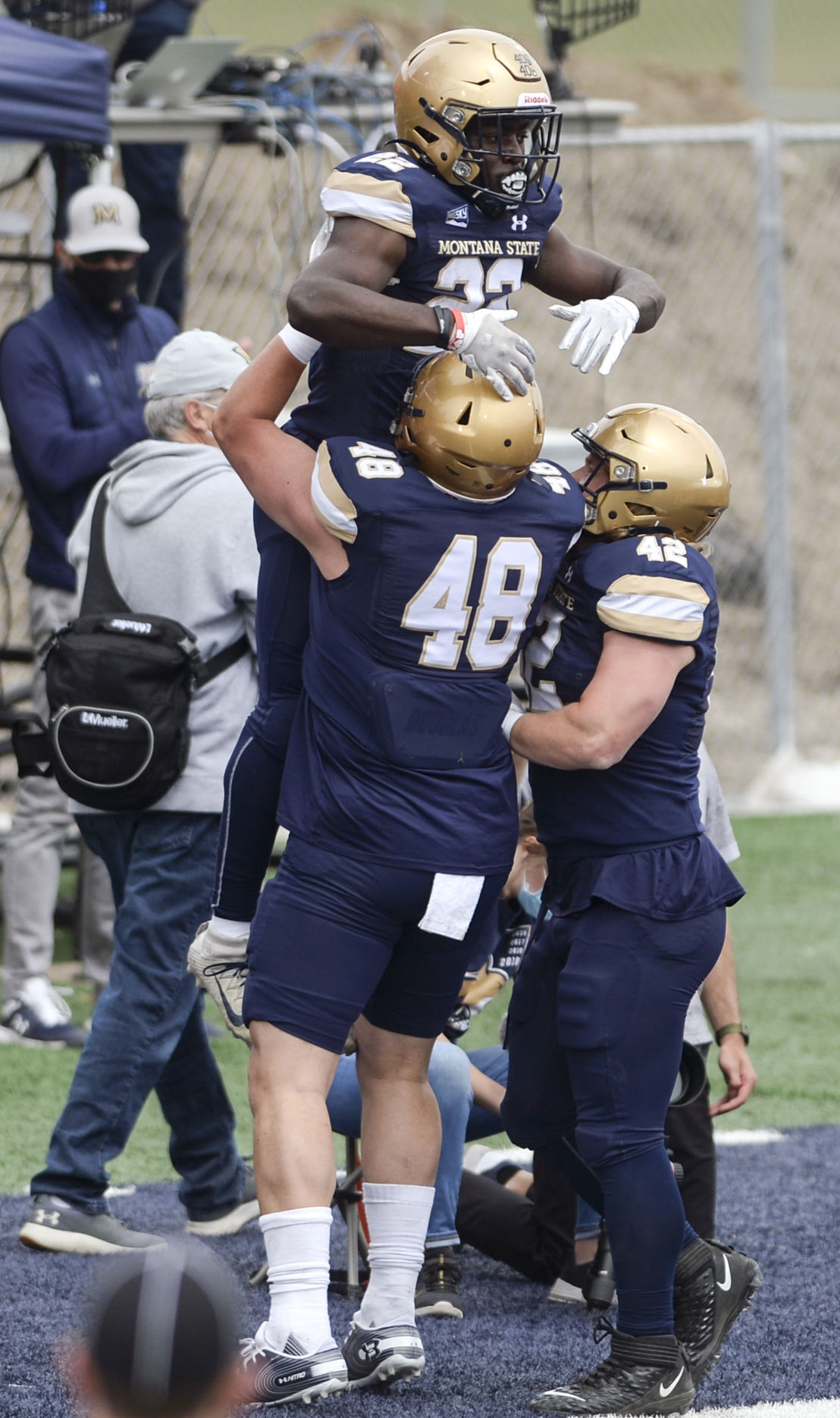 The Bobcats celebrate a touchdown by running back Isaiah Ifanse during the Sonny Holland Classic on April 24 at Bobcat Stadium. 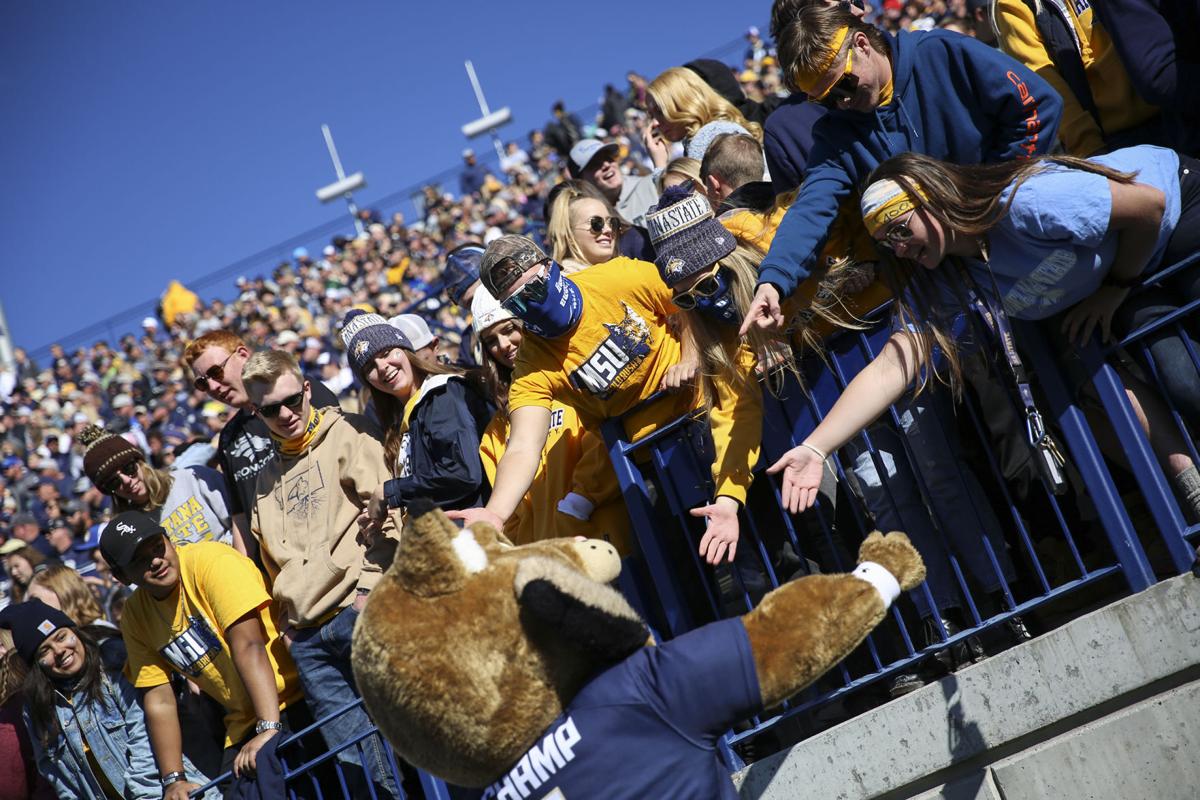 BOZEMAN — Montana State football will have one game televised on ESPNU and two others on ROOT Sports this fall, the Big Sky Conference announced Monday.

As part of the league’s new media rights deal signed over the summer with ESPN, two Big Sky games per year would be shown on linear television on ESPNU as opposed to the subscription service ESPN+ like the rest of the conference’s games.

Montana State’s Week 7 game against Weber State will be one of those two conference games selected. In announcing the game, the league also said the game would now be played on Friday, Oct. 15 instead of the next day as originally planned. Kickoff is scheduled for 8 p.m. in Ogden, Utah.

Montana’s Oct. 2 matchup at Eastern Washington will also be shown on ESPNU.

Weber State will be coming off a bye week heading into the Montana State contest. MSU’s Homecoming game against Cal Poly is the week prior and will be one of two Bobcats games to be shown on ROOT Sports.

ROOT Sports, which has just one more year of a media partnership with the Big Sky, will show four conference games in all, starting with MSU and Cal Poly on Oct. 9. The annual Brawl of the Wild contest featuring Montana State at Montana on Nov. 20 will round out the slate of games.

In between, Idaho at Eastern Washington on Oct. 16 and Southern Utah at Montana on Oct. 30 will also be shown.

Also over the weekend, the Big Sky released the future conference football schedules for 2022-24 to mark the beginning of the league’s 2021 Kickoff event in Spokane, Washington.

The Big Sky will have 12 football teams following Southern Utah’s departure to the Western Athletic Conference following this upcoming season. That movement sparked a restructuring of conference schedules.

For Montana State, that means yearly matchups with Eastern Washington and Montana while the other six conference opponents rotate each year.

The Bobcats will start conference play on the road in each of the three seasons: at Eastern Washington in 2022, at Weber State in 2023 and at Idaho State in 2024. Keeping with tradition, the contest against Montana remains the last week of the season.

After the Eastern Washington game to start the 2022 conference schedule, Montana State returns home for matchups against UC Davis and Idaho State on consecutive weekends. A road game at Northern Colorado follows, and Weber State visits Bobcat Stadium the next week. Week 9 of the season will be MSU’s bye and precedes away games at Northern Arizona and Cal Poly. The team then wraps up at home against Montana.

In 2023, MSU starts at Weber State and then comes home to face Portland State the next week. After a Week 6 bye, Montana State plays Cal Poly at home and then faces Sacramento State and Idaho on the road in consecutive weeks. Home contests against Northern Arizona and Eastern Washington follow before the season finale at Montana.

MSU faces Idaho State on the road to start the 2024 Big Sky slate, and the Bobcats take on Northern Colorado and Idaho at home in the next two weeks. A date at Portland State comes before MSU’s Week 9 bye. Montana State then alternates away and home games over the final four weeks: at Eastern Washington, against Sacramento State, at UC Davis and against Montana.

The last time Montana State played a full season of football was in 2019, when the team went 11-4 overall and 6-2 in Big Sky play. The only two conference losses that year came in consecutive weeks at home against Sacramento State and at former Big Sky member North Dakota.

The Bobcats celebrate a touchdown by running back Isaiah Ifanse during the Sonny Holland Classic on April 24 at Bobcat Stadium.