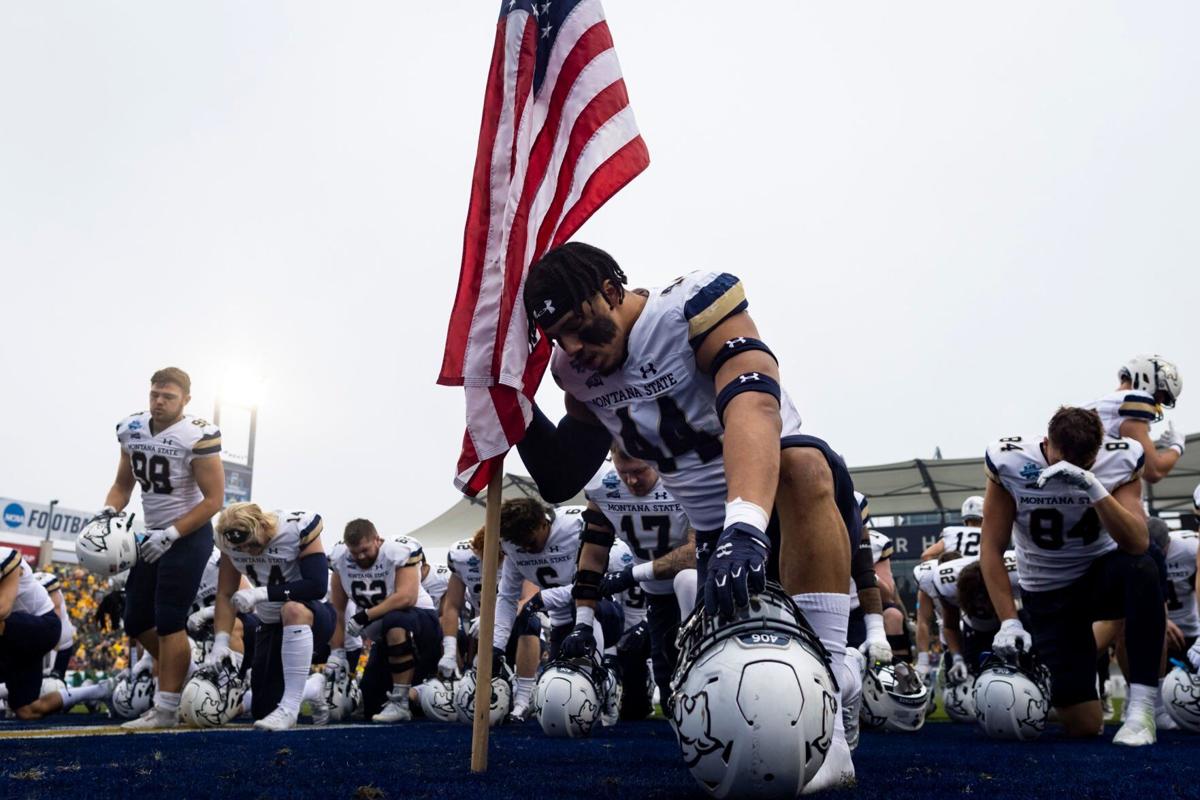 Montana State's Daniel Hardy kneels with the American flag before the Bobcats face North Dakota State in the FCS championship game at Toyota Stadium in Frisco, Texas, on Saturday. 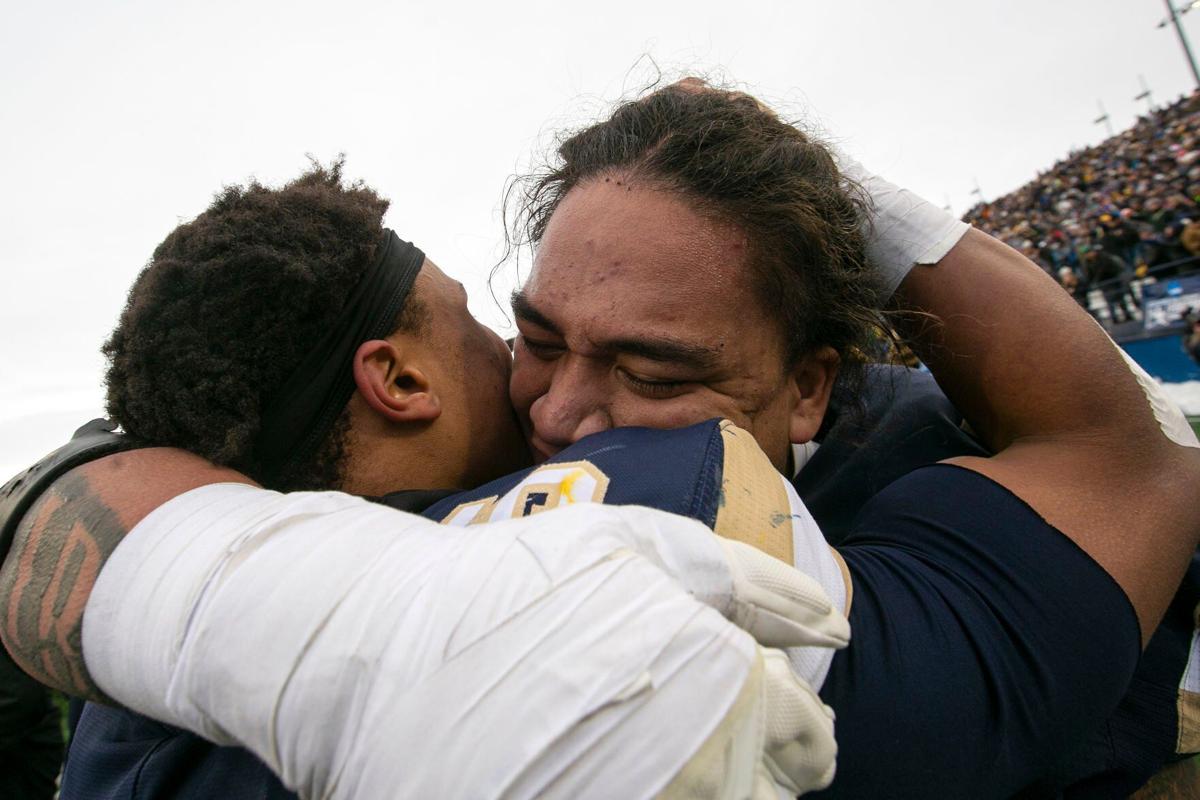 BOZEMAN — Daniel Hardy points to the sky after every sack. Fellow Montana State senior Taylor Tuiasosopo makes the same gesture throughout the course of a game day: during the Bobcat Prowl, during the runout, after big plays, after big wins.

MSU’s 38-10 Football Championship Subdivision title loss to North Dakota State on Saturday marked the end of Hardy’s and Tuiasosopo’s MSU careers. Their years as Bobcats were filled with team and individual success, as well as grief. Hardy lost his father in 2018, and Tuiasosopo's father passed away in 2020.

Now Hardy, a defensive end, and Tuiasosopo, an offensive lineman, are onto the next stages of their lives. They’ve talked often about the joy they had playing at MSU, and how their years in Bozeman helped them get through the aftermath of their fathers’ deaths.

“The biggest deciding factor of me coming here was the culture that we had,” Hardy said Jan. 3. “It’s a very strong culture, and I think that's what's carried us through everything that's gone on in recent history.”

Hardy’s father, Wilbert, died of cancer in February 2018, a few months before Daniel transferred from College of the Siskiyous to MSU. Tears flowed before his first game as a Bobcat, a 26-23 Gold Rush win over Western Illinois.

“I was there with my mom and had to hold back tears a little bit because she was telling me my dad was proud, he was watching and he was here,” Hardy said after the game. “I just started thinking about not having him here. I would’ve loved for him to see everything that I’m doing. I know he’s watching from above, but I’d love to give him a hug right about now.”

Hardy sure had a season to be proud of. His 24 tackles for loss are third in program history for a single season, six behind the record set by Mark Fellows in 1984. Hardy also finished with 16 sacks, good for fourth on the MSU single-season list. The Beaverton, Oregon, native tallied 77 total tackles, forced two fumbles and earned multiple All-America honors. He led the Cats to their first national title game since 1984.

“My dad was my best friend,” he said. “I’ll love him forever, and I’m living every day to make sure his legacy lives on.”

Tuiasosopo also played a key role in MSU’s playoff run, all while nursing the wounds of his father’s passing.

Titus Tuiasosopo died in October 2020. His son would normally be in the middle of a season, but it was postponed (and ultimately canceled) because of COVID-19. Titus’ death on top of the pandemic made Tuiasosopo think seriously about quitting football.

He stuck with it and earned an All-Big Sky second-team honor in the final season of his MSU career. The right guard helped the Cats finish seventh in the FCS with 220.9 rushing yards per game.

“Being part of a team and a family out here is a big help for me,” Tuiasosopo told 406mtsports.com in October. “Football is kind of helping me get through.”

Titus is “always on my mind,” Tuiasosopo said, as evidenced by all those upward-pointed fingers. Moments after MSU beat South Dakota State in the FCS semifinals, Tuiasosopo fell to his knees on the sideline. He buried his face in his hands, then once again pointed them to the sky.

In an Instagram post Sunday, Tuiasosopo thanked his families: the one formed at MSU and the one that saw him grow up in Southern California.

“After Pops passed I didn’t think I could keep going with all this,” he wrote. “But my family has been my rock. The strength I needed when I couldn’t do it alone.”

After the FCS championship game, MSU junior nickelback Ty Okada talked about the adversity his team went through this season.

“Our seniors were a great example of how to face that head on,” he said.

Minutes earlier, Okada was consoling Hardy, who was crouched on the sideline as NDSU celebrated. Hardy and his teammates talked all season about their national title goals, and they nearly reached the summit.

Coming up just short was difficult for the Cats to reckon with, especially for the seniors who won’t get another championship chance.

Hardy didn’t stay crouched for long. As he’s done his whole career, he stood up and flipped to a new chapter.

Montana State's Daniel Hardy kneels with the American flag before the Bobcats face North Dakota State in the FCS championship game at Toyota Stadium in Frisco, Texas, on Saturday. 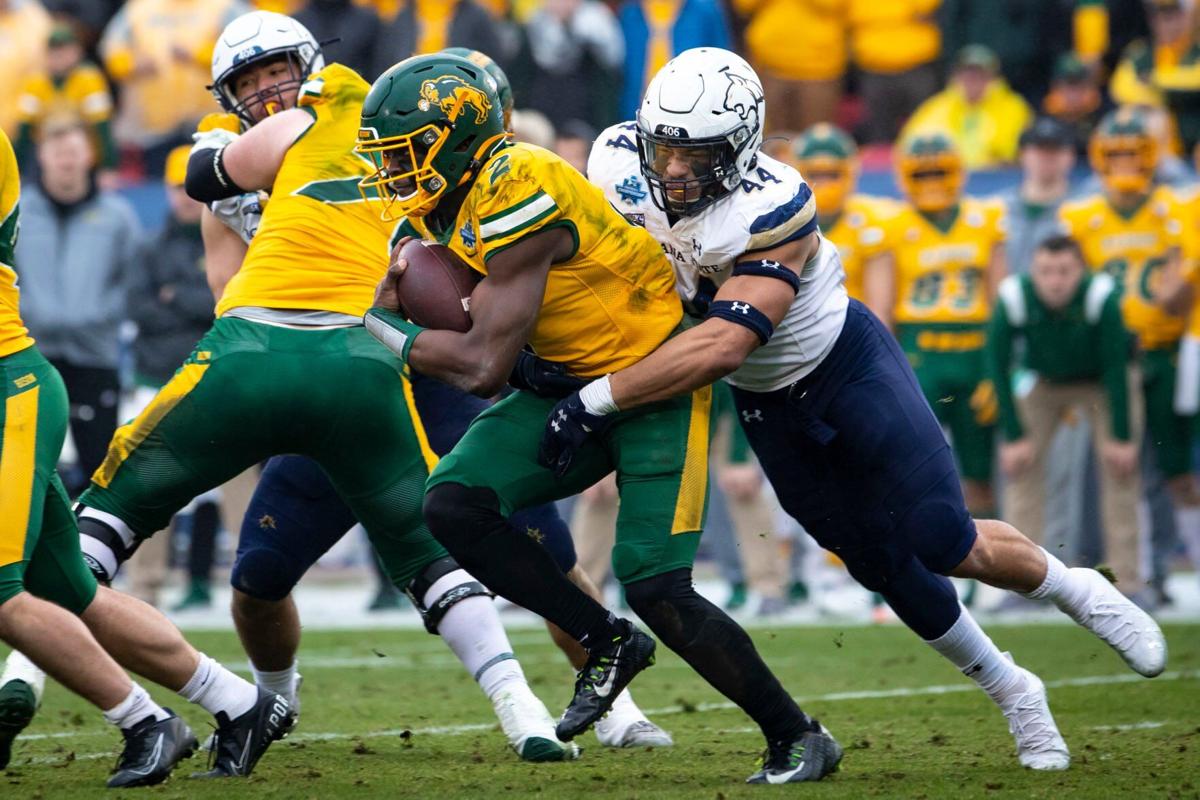 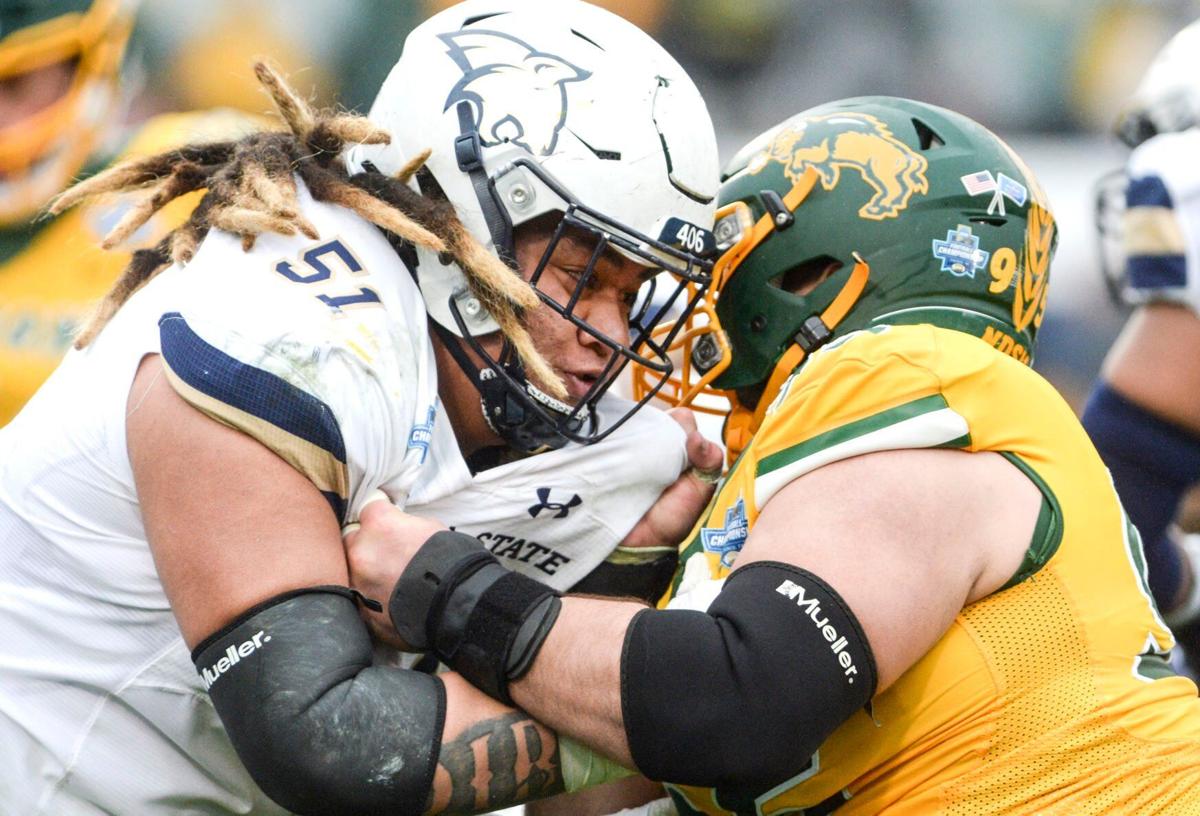