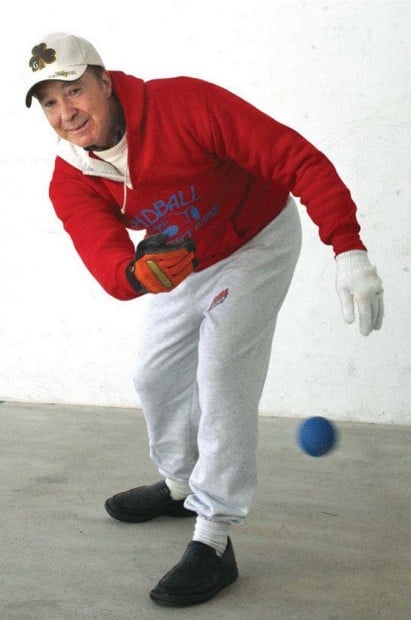 Butte handball great Bill Peoples makes a serve during a photo shoot in April of 2009. - Walter Hinick / The Montana Standard 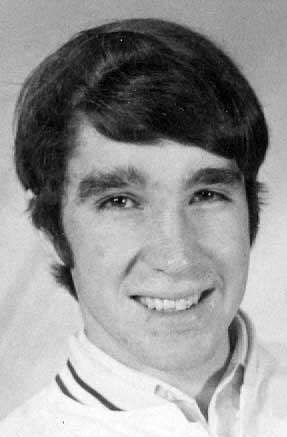 By Sean Eamon of The Montana Standard

Ask anyone that knew the 15-time Montana state men’s singles champion from Butte and they will tell you about Peoples’ passion on the court.

He passed away at 60 Friday after being run over by a delivery truck on the University of Montana campus. On Satuday, the news of the Grizzly great’s death came to friends as they were within sight of where the collision happened at a football tailgate party.

The loss was devastating to those that knew him, but also brought back memories of everything he achieved.

For the most part, handball was Peoples’ life.

“Early on, he kind of lived for handball,” former University of Montana coach Jud Heathcote said. “He was a dedicated player. He loved the game, he loved to practice and he loved to play.”

During his playing career, Peoples ended up winning titles at just about every major handball tournament in the United States and Canada.

A fellow Butte UM teammate from the NCAA 1973 championship team, Tom Zderick, believes that Peoples was among the top athletes the state has ever seen.

“He was definitely in the top half dozen in the state,” Zderick said. “Handball didn’t give him enough acknowledgement. If he was that good in golf he would have gotten ink all over the place.”

Peoples won the singles title at the 1973 intercollegiate tournament. He, his brother Bob, Zderick and former Great Falls player Tim Boland helped lead the Grizzlies to the school’s first national championship in a collegiate sport that year.

His beginnings in athletics were as a cross country runner.

Zderick’s father Joe helped get Peoples involved in the Butte handball scene in his early playing days. He also competed against one of his high school teachers, Tom Pomroy Sr.

“He started playing in high school,” Pomroy said. “He’d come knocking at my door once a week, the same day for a couple years.”

Tom Zderick held the advantage in the early matches between the two future Grizzlies. Eventually handball became a sort of obsession for Bill.

“The first year or two I was beating Billy,” Zderick said. “I went to Europe for three or four months and my dad sent me a letter telling me how much he was playing. I came back and he wiped the court with me.”

The squeaking of tennis shoes and the smacking of the handball became Peoples’ thing. His opponents in his early days reminisced of stories where Peoples would play three hours at the Butte Elks, take a break and then return to the court as late as 11 p.m. to keep playing, even if he was alone.

“Put it this way, he ate, slept, talked, breathed handball his whole life,” Starin said. “It was his whole life. He was nocturnal in some ways. He used to play handball late at night and sleep during the day.”

At that time in Butte, Zderick said, there were a couple hundred of people playing handball in Butte so you could get a game at almost any time. He remembered one time when the two snuck into the Butte Elks to play on Christmas day.

“He spent staggering amounts of time on the court, that’s what made him as good as he was,” Zderick said. “It was just sheer perseverence. I’ve never seen anybody with such intestinal fortitude.”

From the time he was in high school until he was through with college at the University of Montana, Peoples’ schoolmate Starin saw a staggering change.

“He was a pimple-faced skinny little kid,” Starin said. “Lo and behold five years later Billy graduates from UM, he’s won two titles for the NCAA and got the Little Sullivan Award. I wind up being a teacher and I used to use Billy Peoples as an example: ‘This is what you can do if you’re an average person and you want to do something.’”

Peoples also dedicated himself off the court.

During the Grizzlies’ early handball days, the members of the team had to raise money so they could travel to play other schools. Coach Heathcote was splitting his time between the men’s basketball team and the handball squad.

“It’s not like now, they were a bit anti-athletic after the Vietnam War,” Zderick said. “Billy and I came into Butte and started soliciting everybody we knew. From the bar owners we knew to beer distributors. Anybody we knew. Everybody chipped in 25 or 50 bucks and that’s how we raised enough money to get us to nationals.”

Once there, the Griz were able to edge out Texas 19-17 in team points to get the national title.

Peoples’ playing style proved an obstacle for almost all, not just opponents.

“I used to run tournaments and I used to tell him ‘I don’t want you to enter any more tournaments because you always throw us off schedule,’” Heathcote said. “You’d schedule matches for an hour and 15 minutes and his would go over two hours.”

If Peoples was in a tight match he would rely on his defense to carry him through. That meant there would be excruciatingly long volleys between the two players.

“I remember him playing Steve Stanisich for a state title,” Tom Pomroy Jr. said. “They would play volleys for 10 minutes before anyone could get a point.”

When he was up against a more athletic and maybe even more talented player, Peoples would win on sheer will.

Two players recounted a story where he had a Texas opponent that had him outgunned, but Peoples did whatever he had to do to win.

“He came up in a quarterfinals against Gene Craft from Texas,” Zderick said. “He could hit the ball so much harder and run faster, but he was up against Billy.”

Craft routed Peoples in the first game in front of a fairly large handball crowd. The match had been going two-and-a-half hours when it looked like Peoples had reached his breaking point.

“He was hanging in there, finally he barfed on the court,” Zderick said. “The referee called time out and they cleaned it up. Craft came over and said he was sorry because he thougth Billy was going to have to forfeit. Billy said he was just fine, let’s keep going. He just psyched the guy out. He was amazed at how bad Billy wanted to win and Billy won.”

He was named the University of Montana’s Most Outstanding Athlete in 1975. He was inducted into the Butte Sports Hall of Fame in 1996. He took up a No. 76 ranking in the Missoulian’s top 100 Montana athletes of the 20th Century.

Peoples fame on the handball court was notorious in Butte and around the state.

“People used to say ‘You Peoples the handball player?’” he said. “I used ot have to resist saying ‘Yeah, that is me.’ I used to laugh about that because he was a lot more popular than I was, that’s for sure.”

Don Peoples was on the selection comittee for the Butte Sports Hall of Fame, where Bill was inducted as one of the early members.

Looking back, some handball players thought they were pretty fortunate to claim matches against Bill Peoples, even if it was towards the end of his playing days.

Tom Pomroy Jr. recalled getting a win against Peoples.

Peoples knees and body had become weak from the years of playing handball. It took a toll on him, but he still believed the sport was important.

Two years ago Peoples returned to Butte with hopes of seeing handball thrive again. He and Pomroy were organizing handball tournaments for youth players in Butte.

“He came back and me and him both started it,” Pomroy said. “I got all the kids going and he wanted to give back to the game. We introduced probably 60 kids to handball.”

Even with all he accomplished, some wondered what Peoples could have done if he had focused on a more popular sport.

“We both often wondered if we put that sort of effort toward a sport that was more lucrative, tennis or bowling or whatever,” Zderick said. “We chose a sport that was very demanding and one of the most difficult sports I can think of because you use both sides of your body.”

Recent years had seen Peoples suffer from health issues until his death Friday.

In the end, he will not only be remembered as one of Butte’s great champions, but for the effort he put into every match.

In a newspaper interview, John Stockton claimed without evidence that more than 100 professional athletes have died after receiving the COVID-19 vaccine.

There is a new first-place men’s team atop the Frontier Conference standings. Montana Tech handled Carroll 73-58 on Saturday afternoon.

Check out the final scores.

Check out the latest rankings.

Butte handball great Bill Peoples makes a serve during a photo shoot in April of 2009. - Walter Hinick / The Montana Standard