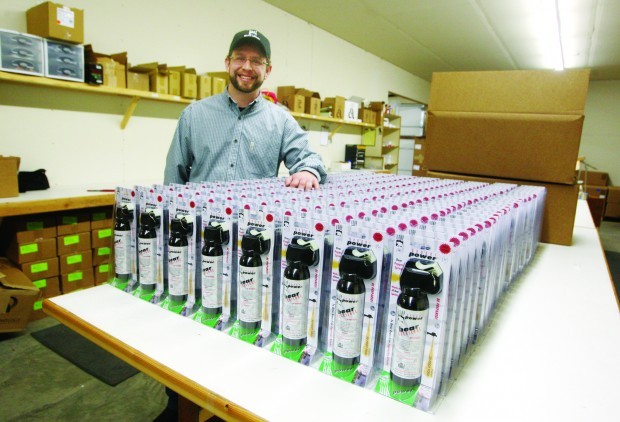 Tim Lynch, general manager the Butte branch of Universal defense Alternative Products Inc., poses, above, with a shipment of his bear spray product. 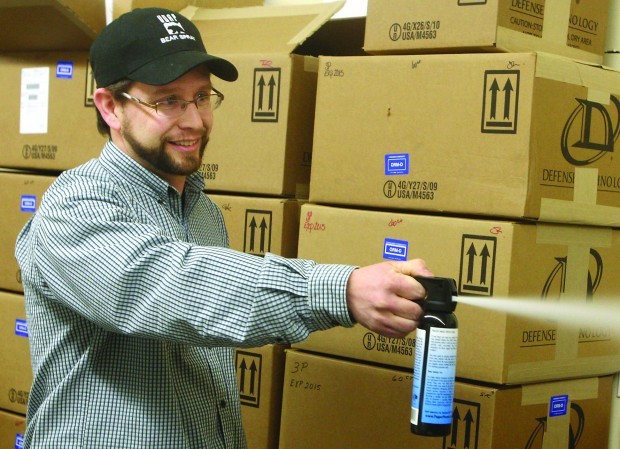 Lynch demonstrates the use of the pepper spray, which can be used to ward off a bear attack.
By Justin Post of The Montana Standard

Shortly after Tim Lynch told his Bozeman boss about his interest in moving home to Butte, the company and Lynch's family soon had a new mailing address.

Since late in 2008, Universal Defense Alternative Products Inc. has operated from a new facility just off Harrison Avenue.

"We are doing very well and we are growing at a very fast pace," Lynch said. "We had a great year."

The company formed in 1994, two years after a grizzly bear attacked owner Mark Matheny while bow hunting in Gallatin County.

A hunting companion carrying a small, 4-ounce pepper spray canister intervened in the attack, shooting the spray into the bear's face.

"Gasping and choking, the bear veered off into the woods," Matheny recounts.

Matheny says he survived the attack, "thanks to God, a friend and pepper spray."

Working as a general contractor at the time, Matheny started the bear spray company in an effort to help educate others about the causes and prevention of attacks.

The company made a video and produced bear safety pamphlets, and now offers roughly 50 self-defense products.

Lynch attributes the company's success to its dedication to offering a quality product coupled with an increase in human-bear confrontations.

The company, long known for its bear deterrent pepper spray, has expanded its product line to include personal self-defense models such as the "Jogger Fogger" and "Mugger Fogger."

All those products, whether sold at the company's online site, www.pepperpower.com, or packaged for shipment to a retail store, are all processed through the Butte facility.

On-site customer sales are not made from the Butte shipping facility, however.

The company's corporate offices are in Bozeman, but all products are processed through the Butte site, Lynch said.

Located in a nondescript beige building with a green, metal roof located on a dead-end dirt road just northwest of Lydia's Restaurant, three employees at the Butte site package and ship the orders.

Employees started working from the Butte location in September of 2008, after the council of commissioners approved a 10-year tax abatement on the nearly $200,000 investment.

Matheny constructed the Butte shipping and light packaging facility, and the building has potential for expansion if the company's growth continues, Lynch said.

The company sells its products to sporting goods stores across the country, including outlets in Butte.

Tim Lynch, general manager the Butte branch of Universal defense Alternative Products Inc., poses, above, with a shipment of his bear spray product.

Lynch demonstrates the use of the pepper spray, which can be used to ward off a bear attack.
© Copyright 2021 The Montana Standard, 25 West Granite Street Butte,MT | Terms of Use | Privacy Policy | Do Not Sell My Info
Powered by BLOX Content Management System from TownNews.com.
You don't have any notifications.