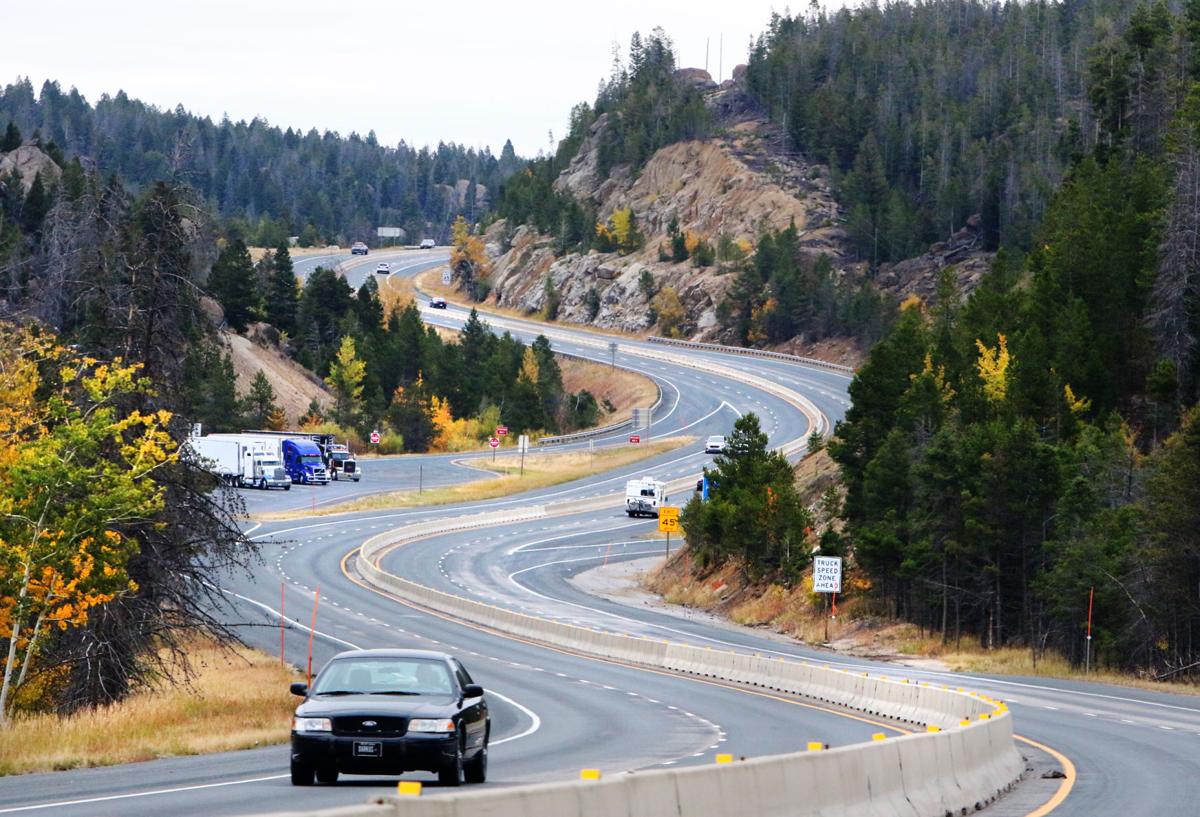 State transportation officials say crash and citation numbers are reasons to slow the speed limit for cars and light trucks — from 75 mph to 65 mph — along portions of Homestake Pass, including the stretch pictured here Wednesday. 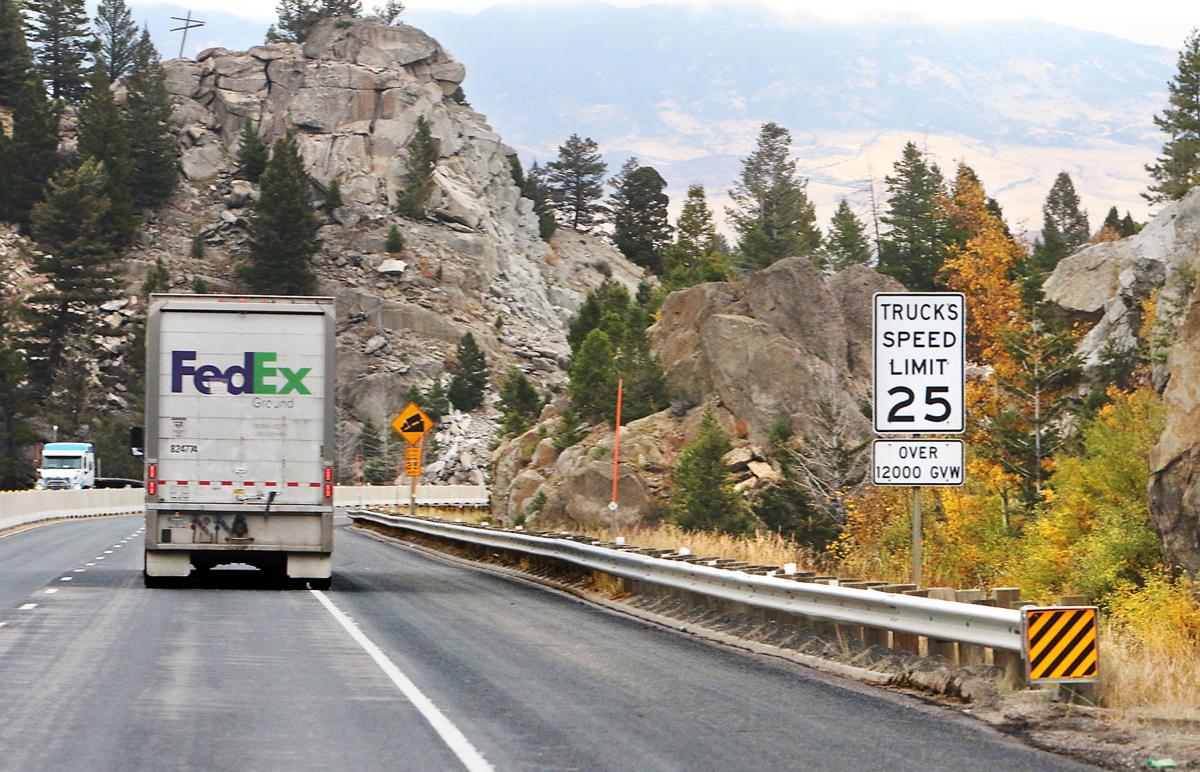 A truck creeps down the east side of Homestake Pass on Interstate 90 at 25 mph with its emergency flashers on Wednesday morning. State officials say the 25-mph speed limit for semis might be too low.

Not only will speed limits not be raised to 80 mph on Interstate 90 over Homestake Pass as they have been along many stretches in Montana, they might be lowered to 65 mph for most of it.

Then again, they eventually might be raised for truckers on an eastbound, downhill stretch that now limits semis to 25 mph. State traffic engineers say that’s probably too slow.

Recent analysis by the Montana Department of Transportation shows the speed limit for cars and light trucks should be lowered from 75 mph to 65 mph in eastbound and westbound lanes for 10 miles of the pass. If that change is made, safety engineers will re-examine the 4-mile-long, 25-mph zone for semis.

The findings and recommendations are included in an analysis and letter from Danielle Bolan, traffic operations engineer at the MDT, to agency officials in Butte. They were asked to pass it along to commissioners in Butte-Silver Bow and Jefferson counties for any input.

Homestake Pass is nearly 15 miles long, with the dividing line between the counties at the Homestake Exit where the pass — and Continental Divide —reaches 6,329 feet elevation.

If the MDT gets no comments, the recommendations will be sent to the Montana Transportation Commission for possible action in December. The study followed a state law enacted in 2015 raising the maximum interstate speed limit to 80 mph, but giving the MDT discretion on where that should not be done.

A review of travel speeds, Bolan said in her letter, showed that 80 mph was not suited for any segment of the pass.

A review of citations and crashes showed both have increased between mile-marker 231 — about a mile past the Homestake Exit at the top of the pass going east — and mile-post 233. The rest areas on both sides of the interstate are at marker 235.

The roughly 2-mile stretch between mile marker 236 and 238, which includes “S” curves and lower advisory speeds marked by yellow signs and yellow flashing lights, “logged the greatest number of crashes and citations,” the analysis said.

That area also has the greatest speed differential between cars and semis heading east. Shortly after the rest area going east, the speed limit for trucks weighing 12,000 pounds or more drops to 45 mph then 35 mph then to 25 mph — all within a short distance. The 25-mph zone lasts for about 4 miles.

It starts where the highway begins a steep decline that reaches a 6-percent grade, and at the end of that long stretch, there is a ramp for run-away trucks. The speed limit reverts back to 75 mph for cars and 65 mph for trucks when the highway flattens on the east side of the pass.

The speed limit on Interstates 15-90 through urban Butte has been 65 mph for many years and officials decided last year to leave it that way.

Bolan said to make limits consistent given the other recommendations, it makes sense to keep it 65 mph from mile marker 228 near the Continental Drive exit through most of the pass. The speed limit now jumps to 75 mph near that exit.

“We think it’s better to keep all that uniform,” she said.

It’s likely the advisory signs for slower speeds — including 65 mph, 55 mph and 50 mph — through the curvy sections will remain regardless of any changes, Bolan said.

“It’s better to err on the side of caution,” she said, adding that the overall objective for any changes “is to reduce crashes” and save lives.

Bolan said the agency is seeking comments from county officials because it considers communities as partners.

Cindi Shaw, chairwoman of the Butte-Silver Bow Council of Commissioners, said Homestake Pass “can be a pretty hairy drive” and there have been numerous speed-related crashes on it, some fatal. But speed limits through the pass are a matter best left to the MDT, she said.

“I would defer to the experts because they have all the statistics and they do the traffic surveys,” she said.

“It’s better to err on the side of caution.''

It may be 80 mph elsewhere, but it stays 65 mph on interstate through Butte

Higher speed limits through Butte? Not so fast

Motorists will be allowed to drive 80 mph along most sections of Montana interstate highways starting this fall, but speed limits will stay at…

State transportation officials say crash and citation numbers are reasons to slow the speed limit for cars and light trucks — from 75 mph to 65 mph — along portions of Homestake Pass, including the stretch pictured here Wednesday.

A truck creeps down the east side of Homestake Pass on Interstate 90 at 25 mph with its emergency flashers on Wednesday morning. State officials say the 25-mph speed limit for semis might be too low.