There is plenty of beach at reservoirs like Canyon Ferry as lake levels drop. 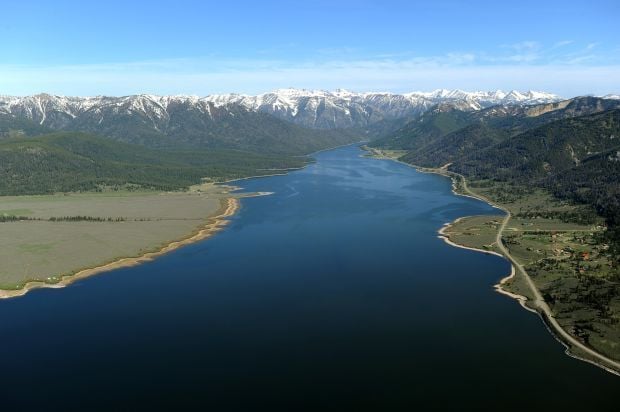 Hebgen Lake, shown in this 2015 photo, is dropping quickly as demands for cool water are being met in the Madison River below the lake's dam.

Boaters and other recreationists using Hebgen Lake were alerted by NorthWestern Energy on Monday that the reservoir will continue to drop as more water is being required to cool the Madison River as hot weather persists.

The Madison River is one of the most popular trout fishing streams in Montana.

“These low water years are especially challenging to meet all the needs of the various stakeholders on the Madison River system,” Jeremy Clotfelter, NorthWestern Energy director of Hydro Operations, said in a news release. “There simply is not enough water to go around.”

The news comes about a week after the U.S. Army Corps of Engineers noted that Crooked Creek Campground on the west end of Fort Peck Reservoir will remain open although the water level in the bay has dropped to only a foot deep. The bay is where the Musselshell and Missouri rivers meet.

“Boaters should use extreme caution when launching or entering the bay,” the Corps warned in a news release.

The marina at Crooked Creek closed on July 11 due to the low water. The bottom of the boat ramp at the site ends at an elevation of 2,225 feet. The lake’s elevation has dropped to 2,232 feet.

Canyon Ferry Reservoir, one of the most popular on the Missouri, is 10 feet below full pool and quickly dropping as inflows are only 1,336 cubic feet per second while releases from the dam are 3,222 cfs.

At Wyoming’s Jackson Lake, the National Park Service warned boaters last week that the Colter Bay boat ramp was closing due to low water with impacts to Signal Mountain and Leek’s marinas by the end of August or early September.

“Park visitors with motorized boats should note that recreation opportunities will be increasingly limited in the park,” the Park Service announced.

The lake is being drawn down to meet downstream irrigation demands, meaning the Snake River is seeing higher than normal flows until September when significant declines are predicted.

The Montana reservoirs are low due to June runoff in the Upper Missouri River Basin, which includes the Madison River drainage, ending at only 52% of average this year — the 10th-driest year in the basin since 1898.

“At this time it’s day to day and definitely not looking good,” he said.

Yvonne Douglas, manager at Kirkwood Marina at Hebgen’s northwest end, said water levels are 6.5 feet low. The water has dropped about three feet in the past month.

“We’re down to the lowest level I’ve seen since I’ve been here,” she said of the five years she has worked at the marina.

The lower water means the loss of some docks in a busy summer season that typically extends into September, she said. Luckily, the marina has a long boat launch.

“The biggest impact right now is to property owners and recreationists that use Hebgen,” said Jo Dee Black, of NorthWestern Energy. “Some of the concerns are that it may be more difficult to put your boat in. And some of the shallow areas you need to be cautious around.”

Whether the lower water levels in Hebgen could result in fewer pulsed releases into the Madison River, Black said that is unlikely, although she said this summer’s weather is similar to conditions in 2007 when the lake dropped 8.5 feet by Oct. 1. Luckily, the lake is a bit higher this year than in 2007. Cool water pulse releases typically end in mid-August, Black noted.

Temperatures of 70 degrees and higher are harmful to trout, sometimes lethal or causing stress that can lead to other infections or disease outbreaks. The Madison River near West Yellowstone, at the head of Hebgen Lake, was almost 70 degrees on Monday.

Thanks to the pulses of cold water from Hebgen, the Madison River downstream of the dam is seeing water temperatures ranging from 64 near Cameron to 71 degrees below Ennis Lake.

On July 21 fishing restrictions were extended to cover the entire Madison River, from the mouth to the boundary with Yellowstone National Park, prohibiting fishing from 2 p.m. until midnight. Last week Yellowstone Park also enacted similar restrictions on its trout streams. The regulations do not apply to lakes.

More information on fishing restrictions enacted on 16 Montana waterways can be found online at https://fwp.mt.gov/news/current-closures-restrictions/waterbody-closures.

Weaver birds in Rwanda tie knots to build their nests, one example of bird behavior that has long fascinated Tom Murphy.

A suspected explosive device was safely detonated by bomb disposal experts at Williams’ Bridge fishing access site along the Jefferson River on Sunday, according to a Montana Fish, Wildlife & Parks press release.

Just south of Mammoth Hot Springs, near the north entrance of Yellowstone National Park, lies a jumble of white/gray rock known as the Hoodoos or, more formally, Silver Gate. The origin of this deposit is a quintessential tale of the dynamic nature of Yellowstone.

I have archery hunted for five years, only to be saved by rifle season in my quest to fill the freezer with an elk annually.

Much is known about how the chemical compositions of gases vary across the Yellowstone volcanic system, but how they vary in time has remained largely a mystery. Our understanding should greatly improve with a recent installation of a station that continuously monitors gases and communicates those data in real time.

Asian giant hornets, also known as murder hornets, have captured some attention after showing up in the United States about two years ago.

At the City of Rocks National Reserve, scientists studying middens have carbon-dated the contents of some middens to be 45,000 years old — particularly near the Twin Sisters rock formations.

There is plenty of beach at reservoirs like Canyon Ferry as lake levels drop.

Hebgen Lake, shown in this 2015 photo, is dropping quickly as demands for cool water are being met in the Madison River below the lake's dam.