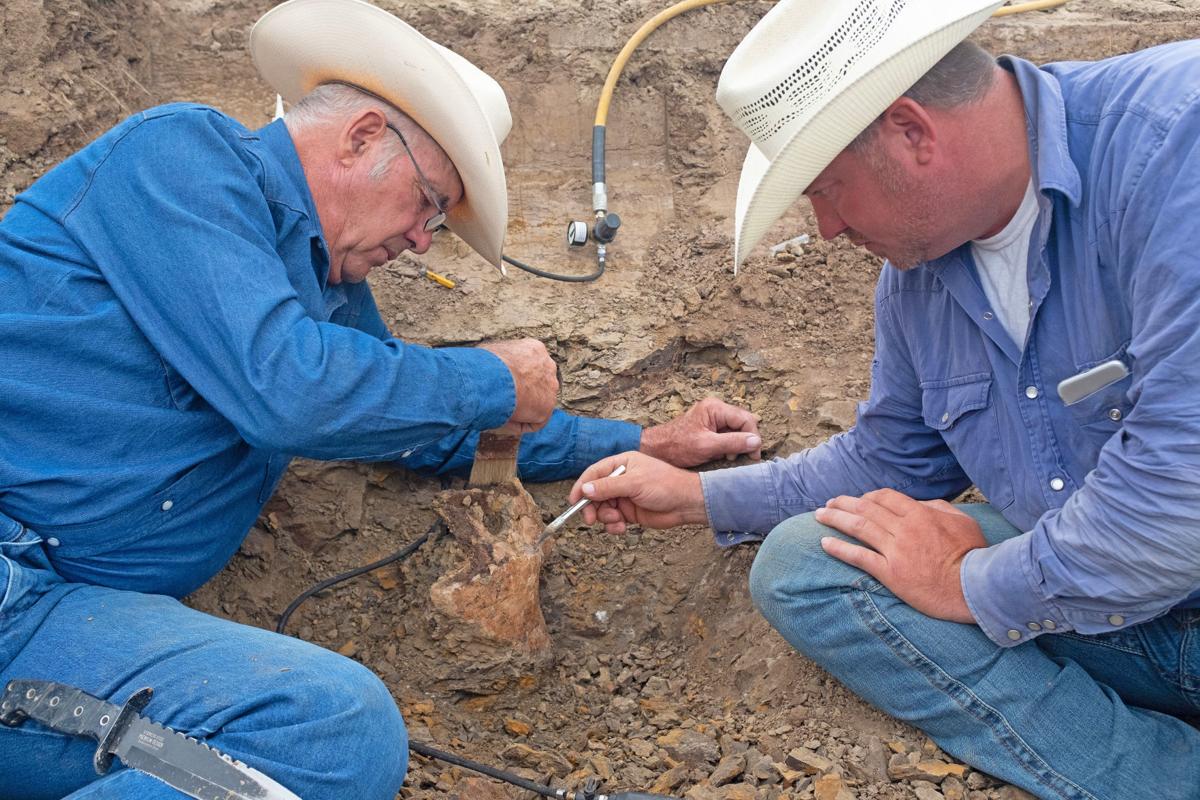 Jake and Mike Harris, who ranch near Newcastle, Wyoming, work to reveal a dinosaur bone found on their ranch during an episode of the Discovery Channel's show "Dino Hunters." 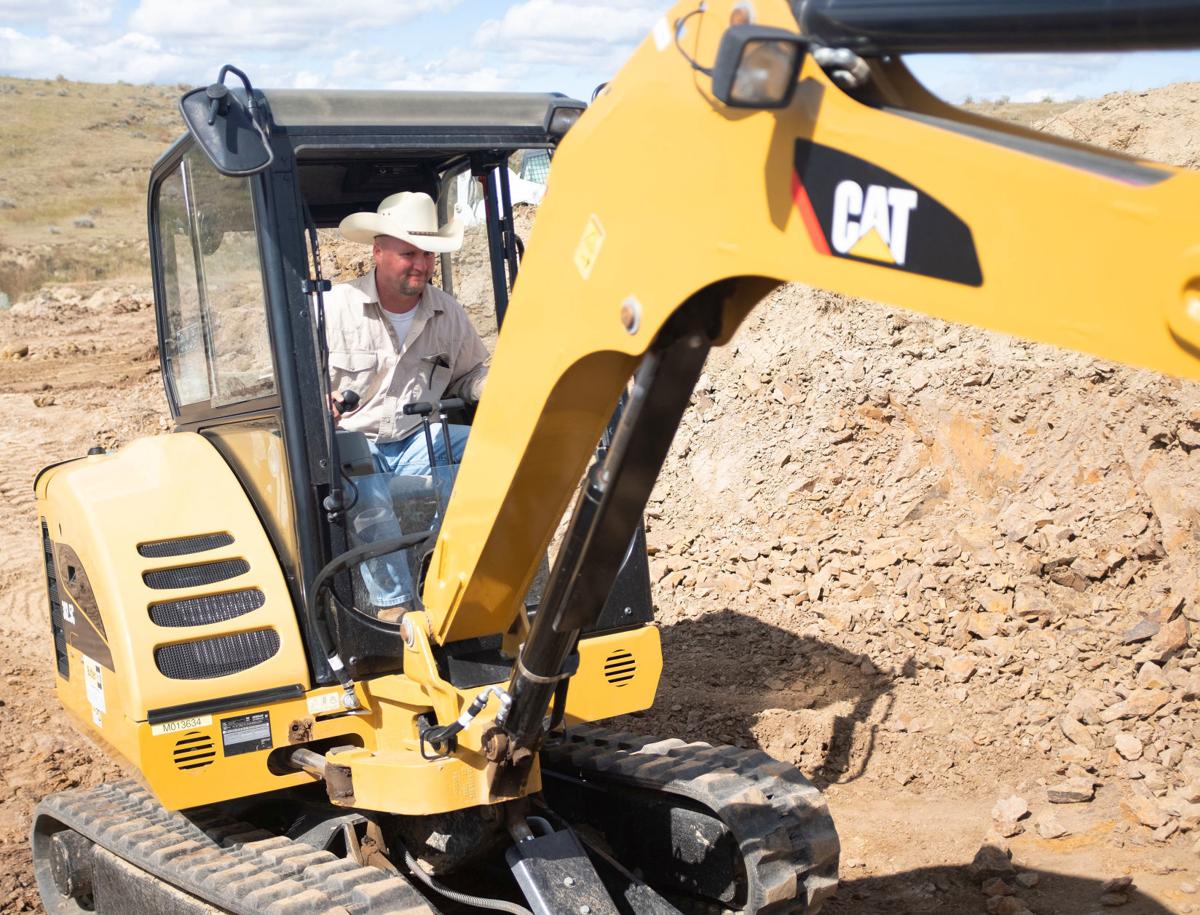 Wyoming rancher Aaron Bolan uses a small excavator to remove dirt from a fossil during an episode of "Dino Hunters."

When John Jones and his crew at Half Yard Productions conceived a new television series on fossil hunting in the West, the hook turned out to be another iconic figure — cowboys.

“It just clicked for everyone,” he said.

With its third episode airing this week on the Discovery Channel, “Dino Hunters” is capturing the imagination of a world wrestling with confinement during the coronavirus pandemic.

“It’s great to provide people an escape,” Jones said, and “get people dreaming about visiting the West.”

In addition to filming the ranchers’ fossil discoveries, the show details some of the chores involved in running a working cattle ranch. The crew also adds animation of the dinosaurs found to bring the long-extinct animals to life for viewers, as well as showing how bones are situated in the ground.

Mike Harris said he was skeptical of the show’s premise when Jones first pitched it last summer.

“I didn’t know if we wanted the publicity or not,” said the 67-year-old rancher.

He changed his mind after considering the lack of family-friendly television shows now available.

Harris got bit by the dinosaur bug after his neighbor, John Bolan, showed him a fossil he’d found and suggested Harris could find similar ones on his ranch, just west of South Dakota’s Black Hills. If the excitement of such a find can be genetic, he passed it on to his son Jake.

“I dug my first bone up 22 years ago,” Jake said. “You catch a fever. You can’t describe it to anybody.”

“If you find things on your own place it makes it extra cool,” his father said. “When you’re digging it out of the ground you’re the first human eyes to see it. That’s cool in itself.”

In 2011 a fossil discovery on the Harrises’ ranch led to the unearthing of a Tyrannosaurus rex skeleton — the giant two-legged carnivore with tiny forelimbs that roamed the region about 66 to 68 million years ago.

“He wound up being one of the most complete T. rexes ever found,” Mike said, more than 150 bones and more than 50% complete.

Although dinosaur bones can be sold, the market is mostly for smaller items like teeth, claws and limb bones, Mike said. Finding a buyer for a larger specimen, which might fetch millions of dollars, is difficult.

Selling fossils to help pay for their work, as well as ranch expenses, seems even more important these days as cattle prices have plummeted by as much as $1,000 a head, Mike said.

“We need to do something to put more money in the pocket of ranchers, or we’ll be extinct.”

Perhaps no one knows that better than Clayton Phipps, who ranches west of Jordan near the small Montana community of Brusett. A unique fossil assemblage he discovered on his neighbor’s land, dubbed the Montana Dueling Dinosaurs, features a beaked plant eater and a smaller meat eater that were buried while locked in battle.

“The Dueling Dinosaurs is one of the most remarkable fossil discoveries ever made,” Scott Sampson, a paleontologist and president of Science World in Vancouver, British Columbia, told Smithsonian magazine in 2017 story. “It is the closest thing I have ever seen to large-scale fighting dinosaurs. If it is what we think it is, it's ancient behavior caught in the fossil record. We’ve been digging for over 100 years in the Americas, and no one’s found a specimen quite like this one.”

An attempt to sell the fossils landed Phipps and the landowner in court. Previous owners of the land claimed the fossils were minerals and therefore theirs, since they retained mineral rights to the property. The 9th U.S. Circuit Court of Appeals recently upheld a lower court ruling that the fossils were not minerals. So sale of the dinosaurs has finally been cleared.

“It was seven years of frustration, for sure,” Phipps said, but the troubles didn’t discourage him from continuing to search for fossils. “Cowboys usually tend to stick with something, see it through to the end.”

Further settling the issue, in 2019 the Montana Legislature passed a bill that makes fossils a part of a property’s surface estate.

With that law newly minted, Phipps’ cousin, Jodi Pierson, made a big discovery last summer. Phipps believes this to be a Nanotyrannus, a smaller relative to the T. rex, although some scientists believe such fossils are simply juvenile T. rexes.

“It turned out way better than we could hope,” Phipps said, and provided the film crew with a great opportunity. “Hopefully it will settle some of the scientific debates.”

The excavation of dinosaur fossils has been criticized by some academics who see the removal of the bones as a loss of scientific context that would enable a greater understanding of the environment the animals lived in.

“We don’t wear white coats or have Ph.D. behind our names,” Jake Harris said, but the ranchers take pains to perform the excavations like the pros.

Mike Harris said he even hired an academic to give him a crash course in fossil extraction and preparation, but they also say some of the disapproval is misplaced.

“I just believe the landowners deserve something for their fossils,” Phipps said.

Mike said he’s “had it hard” in the past, working as a trucker and building fence to provide enough money to make his ranch payments.

“I’ll tell you, dinosaurs are a lot more fun,” he said and chuckled.

Mike also noted ranchers are preserving fossils that otherwise might be destroyed by the extreme weather conditions that continually batter the badlands country where they live. The old-timers, according to Phipps, used to say the country was hard on women and horses because of the remoteness and isolation.

“If we don’t get (the fossils) out of the ground they’ll be gone,” Jake said. “They deserve to be seen by the world.”

In 1854, near Judith Landing, Ferdinand Hayden found the first remains of a dinosaur in North America.

It would be another 68 years before Barnum Brown, of the American Museum of Natural History, was pointed to what would be the first Tyrannosaurus rex fossil. According to a 1924 Billings Gazette story, Brown was dispatched to the Hell Creek area north of Jordan by William T. Hornady, director of the New York Zoo. Hornady was attracted to the area after local wolf hunter Max Sieber had gifted Hornady a triceratops horn he’d found.

The discoveries put Eastern Montana on the map for great fossils from the dinosaur era. In 1997 the most complete T. rex fossil every found was unearthed near Fort Peck Reservoir.

“It’s definitely one of the better spots in the world” for dinosaur fossils, said local dinosaur hunter Clayton Phipps.

Although Phipps said he’s not a big risk taker – “I’m just a cowpoke” – he does take a chance every time he commits resources and time to a dig. “I don’t gamble, except on dinosaurs,” he said. “It might be a bust.”

One time after finding bones on a hillside Phipps moved dirt with a bulldozer for five hours and never uncovered another fossil. Then, 50 feet up the hill, his son Luke found what turned out to be both jaws and much of the rib cage of a triceratops.

“Nothing ventured, nothing gained,” Phipps said and laughed. “At least Luke came through.”

Growing up in Eastern Montana, Phipps said he had no idea that he could find a “truckload” of dinosaur fragments laying around the badlands countryside. But once someone showed him what to look for, he got hooked and began doing research at museums and on the internet. Now he’s committed to the hunt.

“I plan on finding and saving as many dinosaurs as I can while I’m on this rock,” he said.

While working in the wide-open country he can’t help but think about what his prairie homeland looked like millions of years ago when an inland sea split North America and Montana’s climate was more like Florida’s is now.

“It does make you wonder what all happened,” he said.

A motorcyclist has survived a violent attack by a bison in the Black Hills of South Dakota, sheriff's officials said.

The Montana Fish and Wildlife Commission advanced a pair of petitions Thursday that could shape the future of the Madison River.

Not all varieties of blue-green algae are harmful, but some can produce dangerous toxins particularly for pets or livestock or children.

There are 14 different types of cutthroat trout found in waters across the West.

Hayden Valley is a gorgeous expanse of grassland and meadows located right in the center of Yellowstone National Park.  It is a haven for wildlife and a popular spot for viewing some of Yellowstone’s most iconic animals.  But why does this meadow exist in the midst of what is otherwise a high-altitude forest of lodgepole pine trees?  The area’s geology holds the key.

With fire danger rated high, Yellowstone National Park had its first two wildland fires of the season this week.

Jake and Mike Harris, who ranch near Newcastle, Wyoming, work to reveal a dinosaur bone found on their ranch during an episode of the Discovery Channel's show "Dino Hunters." 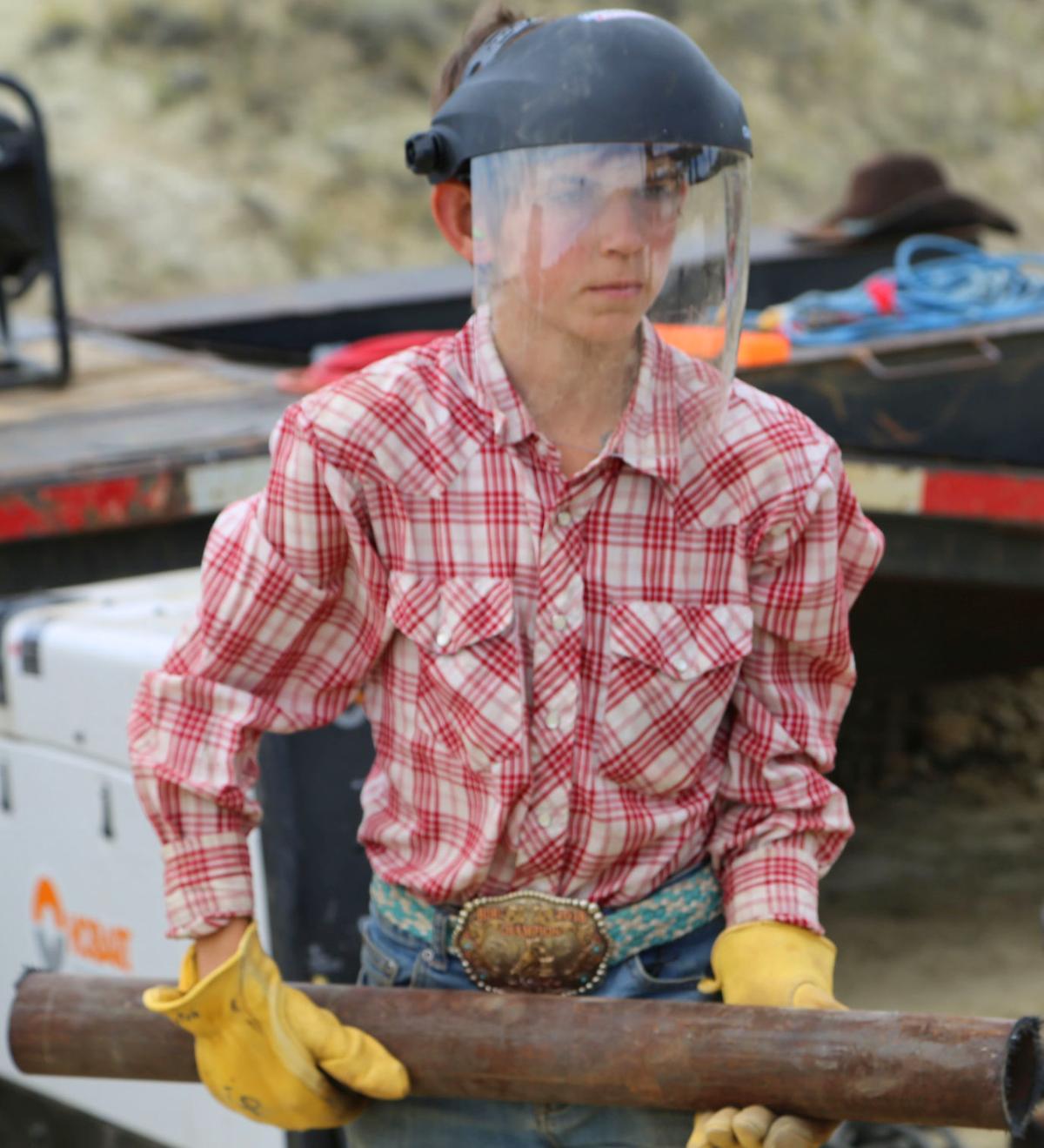 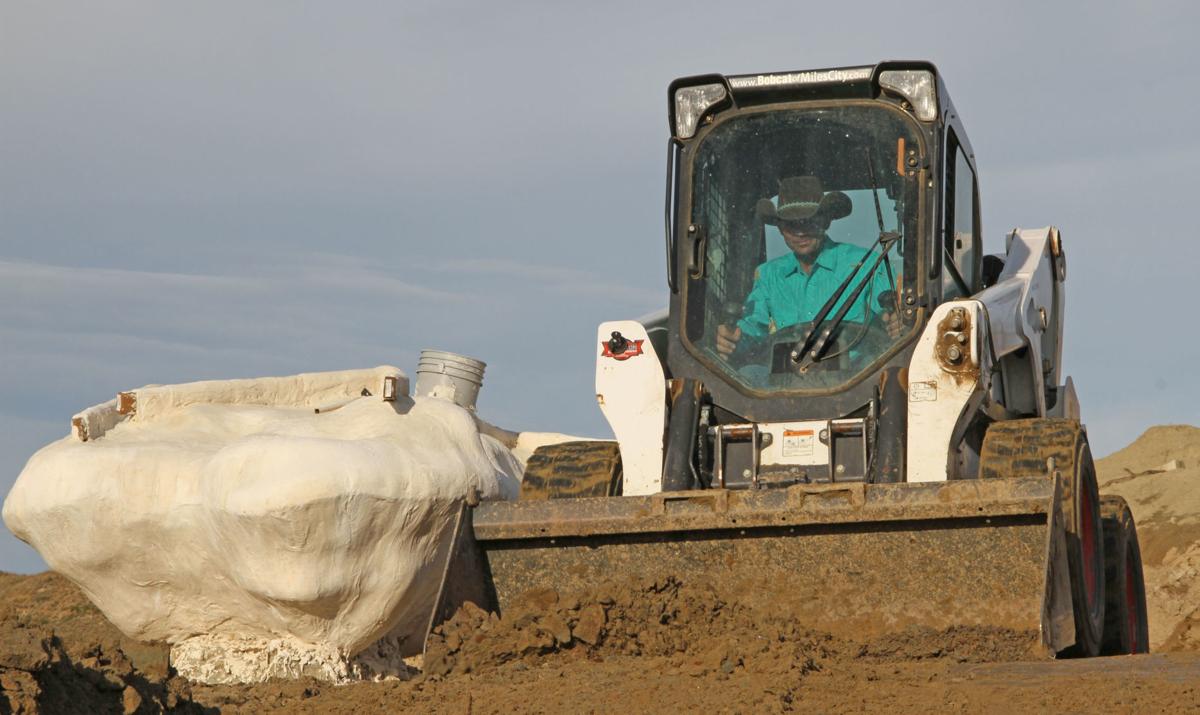 Wyoming rancher Aaron Bolan uses a small excavator to remove dirt from a fossil during an episode of "Dino Hunters." 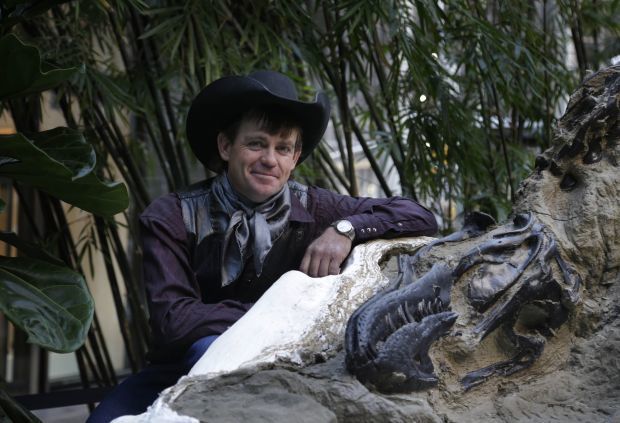 Brusett-area rancher Clayton Phipps poses for a picture with one of the two "dueling dinosaurs" he discovered in a 2013 photo.