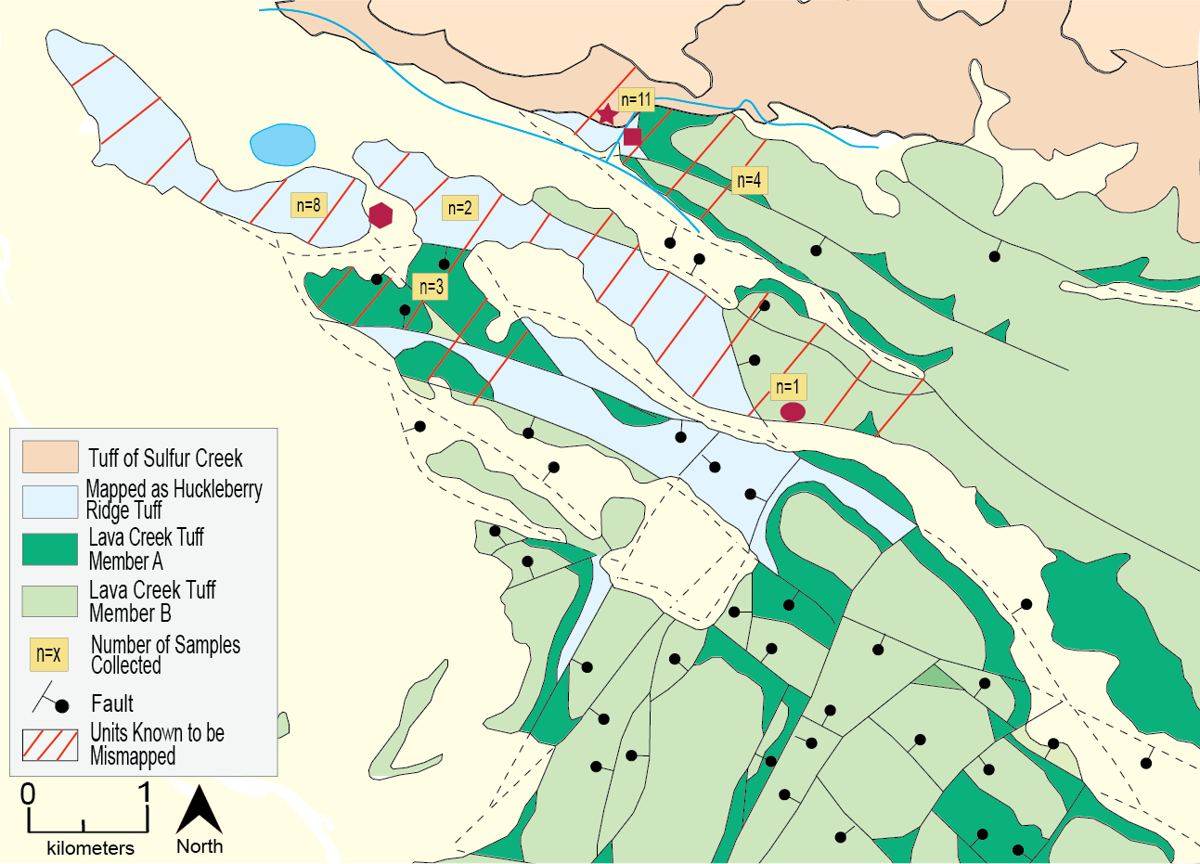 This map shows the northwestern corner of the Sour Creek Dome. The red lines mark the area where the map will be changing to become more accurate. 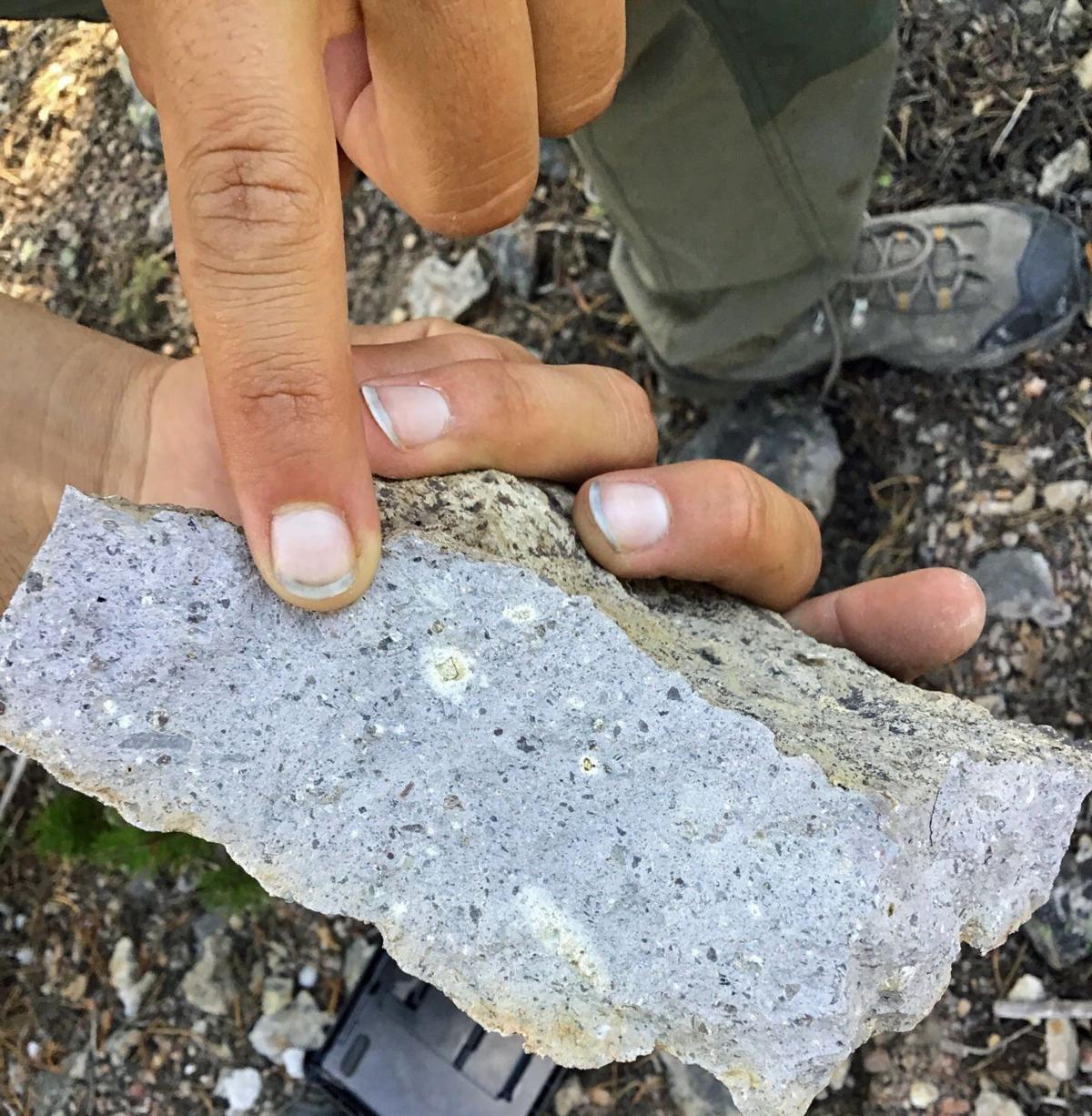 A hand-sample photo shows what is known to be Lava Creek Tuff “unit 2.” Small black scoria pieces are distinctive of this unit compared to the previously recognized Member A and Member B of the Lava Creek Tuff.

Yellowstone Caldera Chronicles is a weekly column written by scientists and collaborators of the Yellowstone Volcano Observatory. This week's contribution is from Raymond Salazar, graduate student at Montana State University, Madison Myers, assistant professor of Igneous Processes at Montana State University, and Colin Wilson, professor in the School of Geography, Environment and Earth Sciences at Victoria University of Wellington in New Zealand.

Although the Yellowstone Volcano is very unlikely to have another major explosive eruption in our lifetimes, understanding the timing of past eruptions and what triggered them can give volcanologists insight as to what the beginning of any future eruption might look like. Currently, the best way to determine the timing and causes of past eruptions is through a combination of thorough field mapping and geochemical analyses. Today, we dive into why this is important, and how volcanologists are trying to tackle the question of the Lava Creek Tuff eruption.

About 631,000 years ago, the Yellowstone Volcano returned to life after a hiatus that lasted tens of thousands of years. It was the beginning of the Lava Creek eruption. This eruption deposited 1000 cubic kilometers (km­3) of rock and spread ashy material across the western United States, southern Canada and northern Mexico.

Despite being the most recent of Yellowstone’s two supereruptions (the other being the 2.1-million-year-old Huckleberry Ridge eruption; the 1.3-million-year-old formation of Henrys Fork Caldera was too small to be considered a supereruption), we know surprisingly little about it. For instance, scientists recently found two new units of this eruption that were previously unrecognized, with profound implications for the duration of this eruption.

Many people might think of a supereruption as a singular, large event where a shallow magma chamber, located a few miles beneath the surface, is effectively emptied, causing the overlying ground to collapse into the vacated space. One might envision this eruption to be a vast outpouring of gas mixed with molten material that creates a hot, dense ash-flow deposit (called an ignimbrite), which cools as one cohesive unit. However, this is not always an accurate view.

Studies of the Huckleberry Ridge Tuff from the 2.1-million-year-old caldera-forming eruption have highlighted that these events can have time breaks of hours to decades, shown by layering in the deposits and by evidence for cooling as well as movement of material by wind and water. Work on the Huckleberry Ridge Tuff also showed that the eruption was fed from multiple magma bodies.

But what about the Lava Creek Tuff? Work in the Sour Creek Dome region, on the east side of Yellowstone National Park, has revealed that the Lava Creek eruption is more complicated than previously thought.

In this area, two ignimbrite units (temporarily named by the geologists studying the area as units 1 and 2) that were mapped in the 1960s and 1970s as Huckleberry Ridge Tuff have been shown by age dating to be parts of the Lava Creek Tuff. So, what’s the big deal?

The older unit 1 is found as boulders in a coarse, near-vent deposit, showing that it must have been erupted, completely cooled, and then broken up and transported in the next event. The other newly recognized ignimbrite (unit 2) was then deposited on top of the deposit containing boulders of unit 1. Since large ignimbrites take a long time to completely cool, these deposits suggest that there was a break between the two events of years to decades. And all this happened before any of the material mapped previously as the Lava Creek Tuff was erupted.

The picture that emerges is of a complex sequence that started with multiple explosive events that might have been separated by years to decades before the better-mapped explosive eruptions ensued.

To further understand the geological history of the eruption, Montana State University graduate student Raymond Salazar will be re-mapping the entire Sour Creek Dome area and collecting samples (under a permit issued by Yellowstone National Park). Geochemical analyses of these rock samples will identify the pre-eruptive magma compositions and can be used to estimate the temperature and depth of the magma chamber.

The importance of this information lies in determining whether these two new units were “leaks” of a single large “Lava Creek magma body,” or were separate pools of magma, as well as trying to understand what triggered these earlier outbreaks.

Even in a place like Yellowstone, where the geology has been studied for decades, there are always new stories to tell, and new mysteries to solve.

Montana elk hunters still have an opportunity to fill their tags in many hunting districts around the state during late antlerless seasons.

The heritage muzzleloader hunt is the product of legislation earlier this year and the recent adoption of regulations by the Montana Fish and Wildlife Commission.

Due to lack of snow, Showdown Montana ski area in the Little Belt Mountains is postponing its opening day to Friday, Dec. 17.

Threatened by a blinding snowstorm in the Bob Marshall Wilderness, a young trapper relies on the hooting of an owl to rescue him.

Bridger Bowl became the second ski area this week to announce that lack of snow will delay its opening day.

This map shows the northwestern corner of the Sour Creek Dome. The red lines mark the area where the map will be changing to become more accurate.

A hand-sample photo shows what is known to be Lava Creek Tuff “unit 2.” Small black scoria pieces are distinctive of this unit compared to the previously recognized Member A and Member B of the Lava Creek Tuff.