Hallie Zolynski is a believer in hands-on training, maybe to the extreme.

This past calm, sunny Saturday the Butte wilderness survival expert was snowshoeing near the jagged Pintler Mountains south of Anaconda. At about 3:30 p.m. she was purposely buried beneath the snow as part of her avalanche awareness clinic.

“If you ever want to not get caught in an avalanche, try getting buried sometime,” she said, since even the drill of being covered in snow can frighten someone into being more cautious.

Whether to escape ski resort crowds and restrictions, or just to get outside, more people are turning to Montana’s backcountry this pandemic winter. Zolynski and her partner Rod Alne use the urgent burial drill to prepare their students for the worst in the field. The training makes the clinic unique, intense and memorable.

Alne alerted the class of eight people that Zolynski was buried, activating the avalanche victim search protocol they had just learned.

“Everyone turn your beacons to search!” student Jeremy Champion commanded, taking charge. The snowboarder from Bozeman and other class members spread out to find her.

“Twenty!” Katie Bjornen yelled to the group. The Anaconda skier’s beacon had a signal, 20 meters away.

“Eleven!” yelled Kendra Kallevig, a skier from Bozeman. “I see a jacket!”

They heaved Zolynski above the surface.

After assessing her for injuries, and telling her everything would be OK, the students moved Zolynski from the snow — lowering the risk of hypothermia — and laid her down on a snowmobile.

Suddenly, Zolynski sprang up and took the handlebars, a big smile on her face.

The students in her course shared a laugh, knowing all along it was just a drill. Alne praised the class. They had found and “stabilized” Zolynski in just eight-and-a-half minutes.

Zolynski emphasized the importance of the human factor — knowing the personalities and experience of the people you ski or ride with, and also being aware of the other groups in the area you don’t know. On the wrong terrain on the wrong day, they could trigger an avalanche above you.

Backcountry humans are more of a factor than ever this winter across the state.

After 25 years playing in Missoula’s popular backcountry ski terrain on Lolo Pass, Doug Hutcheon visited a couple weeks ago to set up a park for people to fine-tune their beacon search skills.

“I was shocked,” he said. “A lot of the parking lots are filling up very quickly.”

Hutcheon is on the board of the West Central Montana Avalanche Foundation, which provides avalanche forecasts for the Missoula area. Using field and weather observations, forecasters estimate how dangerous avalanche conditions are on area terrain — a vital resource for those traveling outdoors to play.

Lolo Pass has become so popular with recreationists that Forest Service personnel have turned into parking attendants, he said.

In Bozeman, Uphill Pursuits specializes in alpine touring gear — the boots, bindings and skis that let a skier climb a mountain before they ski down it — along with the avalanche safety gear that goes with the activity.

Sales for much of that equipment have doubled this year, owner Riley Siddoway said.

That’s because for COVID safety, some Montana ski resorts are limiting attendance by requiring reservations, and the lodge experience has changed because of social distancing.

"The reservation systems have definitely had an impact," Siddoway said. “People are wanting to go into the backcountry because either they couldn't get a reservation or they're not sure how it's going to work — or the lack of the lodges. And so I would say that's all COVID impact this year.”

There has also been a major uptick in customers without prior backcountry experience, Siddoway said, estimating that 30% of his alpine touring setups go to families getting into the sport for the first time. This year he’s also commonly selling to customers in their 50s and 60s who are new to the sport.

Hutcheon wonders what will happen when all those fresh faces take to the backcountry in greater numbers.

“There's a lot of folks kind of standing at the starting gate itching to really get out,” he said. “As soon as there's more snow, I think that starting gate will drop, whether for better or for worse."

Anyone new to the backcountry is by default inexperienced with the complexities of avalanche danger: reading the weather, analyzing the snowpack for weak layers, and how to use the essential gear — beacons to track a buried partner, a long probe to detect the squish of a body beneath the snow, the proper way to shovel out an avalanche victim.

That’s why clinics like Zolynski’s are essential to safe backcountry use. And those clinics are filling up as fast as backcountry parking lots.

Online courses are also being offered, both to deal with increased demand and because in-person courses are operating at limited capacity due to the pandemic.

In Missoula, it’s hard to find enough instructors with the experience to teach the courses, and avalanche education events and community fundraisers to support the effort have had to be canceled for the pandemic, Hutcheon said.

"I think by all means there are more people this year that were interested and potentially willing to take a class that may not have had the opportunity because of just how large the demand was,” Hutcheon said.

Zolynski keeps her courses small to offer more personal instruction. In that regard she was ready for the pandemic. She now keeps students distanced and masked while indoors and surfaces clean. She chose to maintain in-person classes because avalanches present a life-or-death risk.

“If someone was to go with me into the backcountry and told me, 'Oh, I just took an avalanche clinic online,' I don't think I'd feel comfortable going into the backcountry with that person. Because they never got any hands-on time. I feel like these are the type of clinics that really you need to be hands-on," she said.

The burial scenario is her trademark, but Zolynski also teaches students the basics of digging a snow pit to judge how reactive the snow is. Using a beacon and probe takes practice, and her students train.

Students also learn what kind of backcountry partner they are in a group.

Does someone have a tendency to follow a group leader or decide for themselves? Will someone else usually stick to a plan despite the dangers? These are factors that make as big a difference in safety as the avalanche risk level, Zolynski teaches.

Champion, the Bozeman snowboarder who took Zolynski’s course, certainly derived a lesson from the burial scenario.

“Finding someone is half the work,” he said. “You find someone and the work has just started.”

That’s why a backcountry partner should also be trained in first-aid, Alne said, adding that Gallatin Search and Rescue is overwhelmed with rescues from backcountry users this winter, most of them unrelated to avalanches.

Zolynski’s courses are serious, but they are also a place to celebrate shared enthusiasm for the snow with backcountry peers, and are therefore heavy on smiles, laughter and humor. Where else will someone tell you to “play with other people’s probes?”

Hosted at the Sugar Loaf Lodge on the scenic Mill Creek Road south of Anaconda, Zolynski’s courses provide another unique service: many of her clients come from Butte, Anaconda, Philipsburg and Deer Lodge — the no-man’s land between the Gallatin and Missoula avalanche forecast areas.

Without a local forecast, avalanche information for the area has long been limited to what’s communicated between backcountry users. Even during the pandemic, that use is scarce compared to Bozeman or Missoula.

Following the Saturday clinic, Zolynski and Alne said plans are in the works to provide field and community observations for avalanche conditions in the Pintlers and the Highland Mountains, located south of Butte. Several people have been killed in avalanches in those areas in recent years. The goal is to post the information to the Friends of the Gallatin National Forest Avalanche Center website at MTAvalanche.com.

Not everyone who takes Zolynski’s course is new to the backcountry. John Chor, Michael Moreni and Branten Moreni, three snowmobilers from Anaconda, have been at it a long time. They’ve seen avalanches, and they’ve had close calls.

“I’ve been extremely blessed, because I’ve gone out with complete reckless abandon,” Chor said during Saturday’s course. “That’s why we’re at this training. We’ve pushed it a long time. We need to be here.”

The pandemic has changed many aspects of life in Montana, including its backcountry. But nature’s fury — a great white monster lurking quietly above until released with a roar — that hasn’t changed.

Discovery Ski Area is open for skiing and riding seven days a week. First chair’s at 9:30 a.m. and the last chair up the mountain is at 4 p.m.

For as long as he can remember, Alex Bruce has made a live show happen on New Year’s Eve. This year the co-owner of Montana Pro Audio wasn’t r… 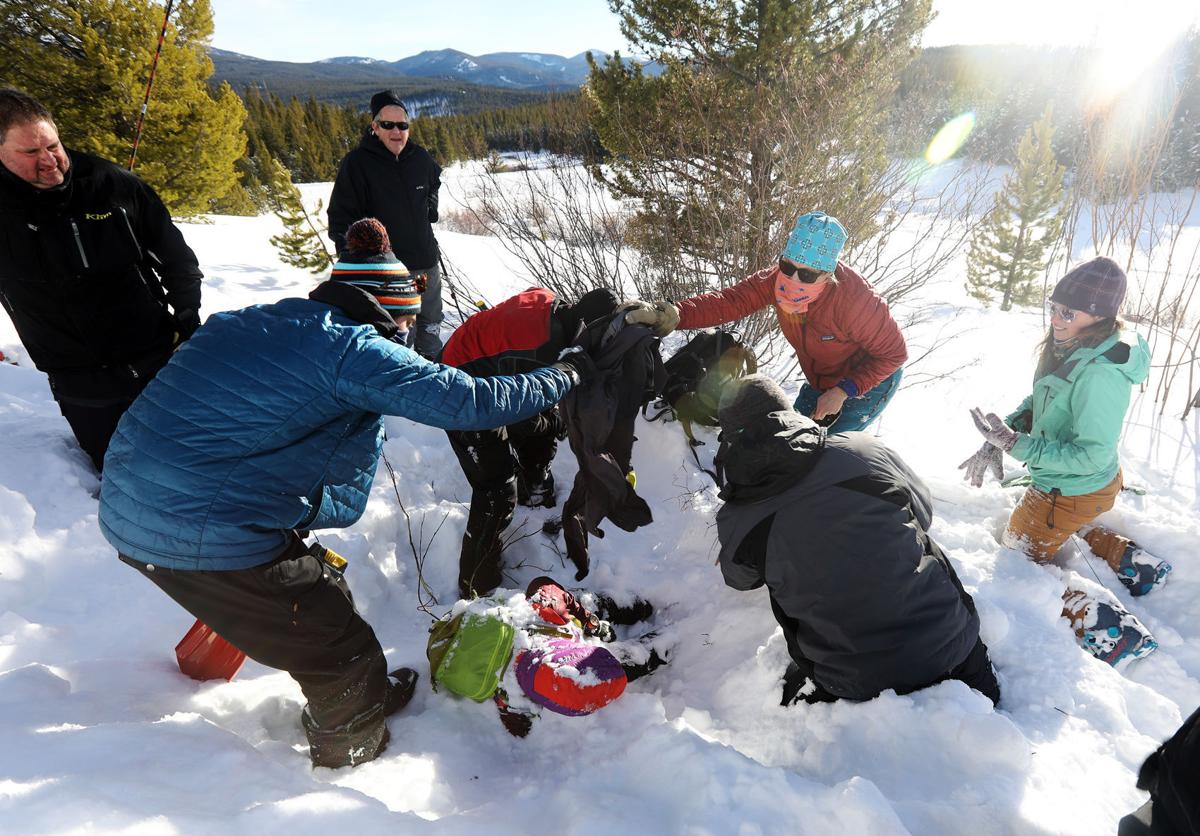 A group of skiers and snowmobilers taking an avalanche awareness clinic works to dig their instructor, Hallie Zolynski, out of the snow in a simulation drill on Saturday near Sugar Loaf Lodge outside of Anaconda. 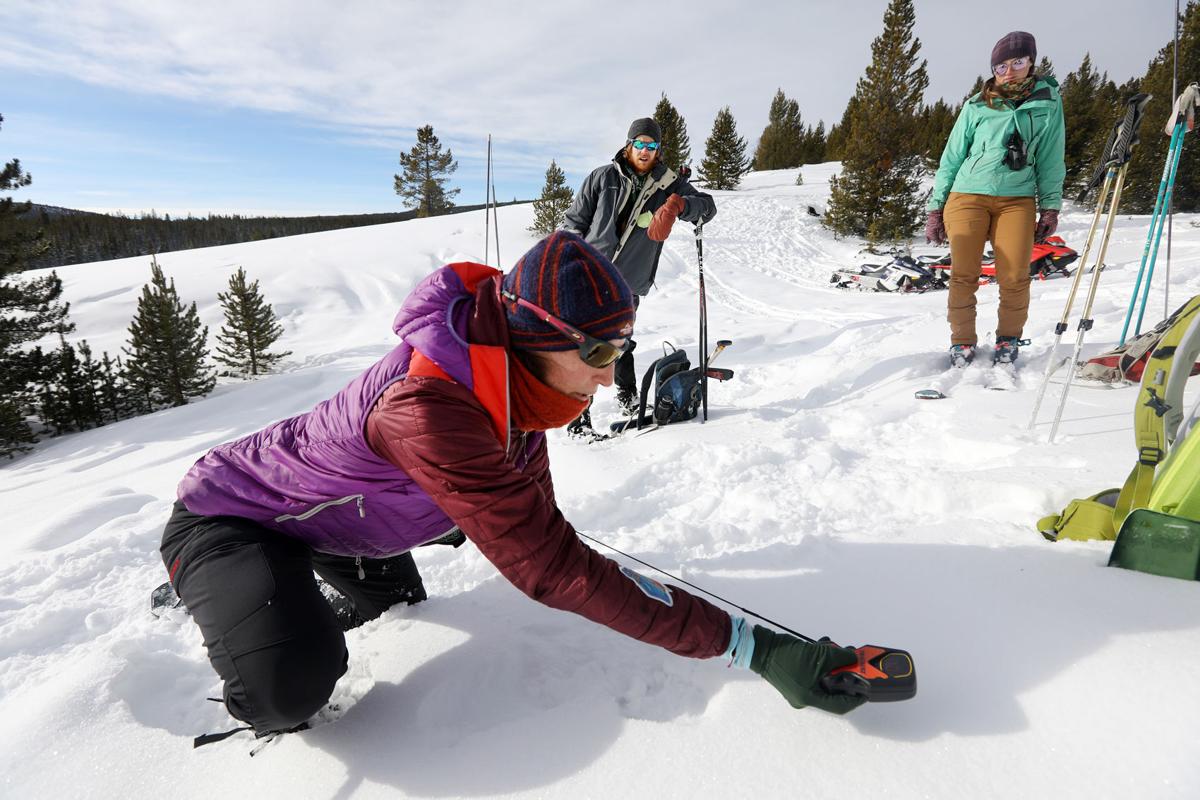 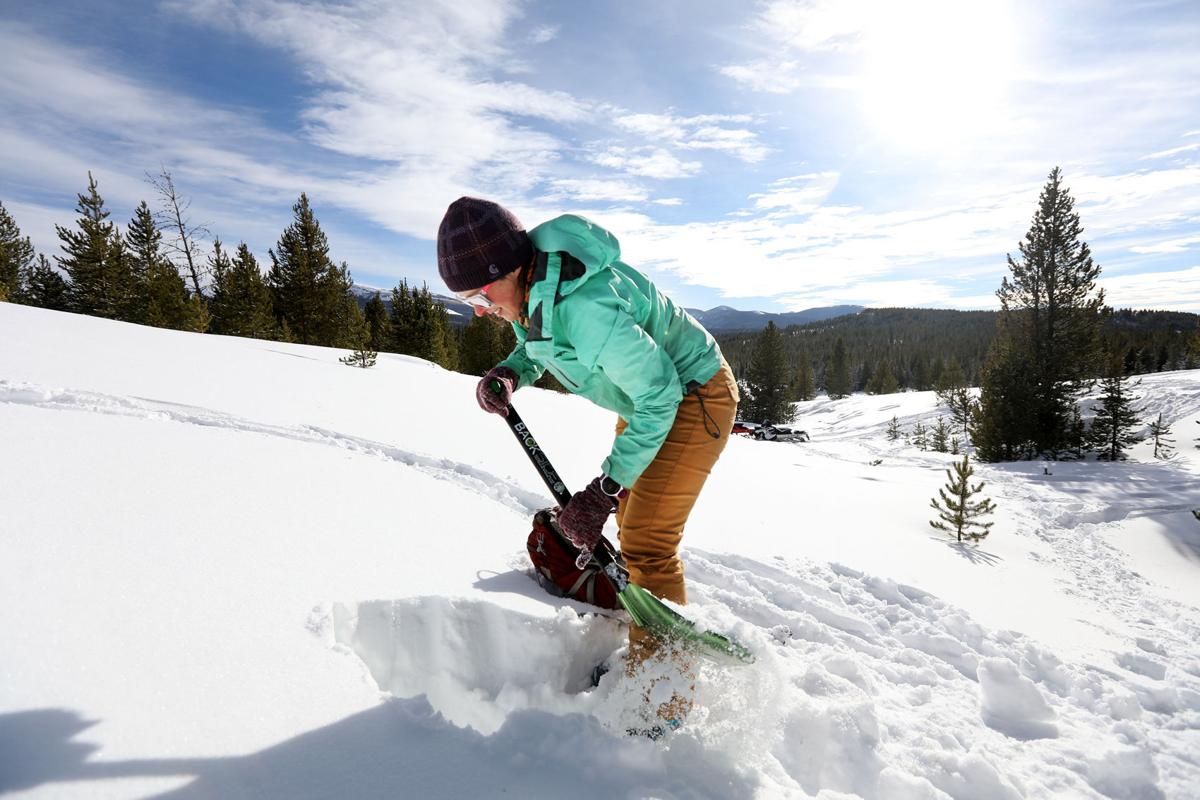 Katie Bjornen, an avalanche clinic participant, digs her first snow pit to look at the layers of snow below the surface on Saturday outside of Anaconda. Bjornen took the clinic with her husband and said they are hoping to do more backcountry skiing. 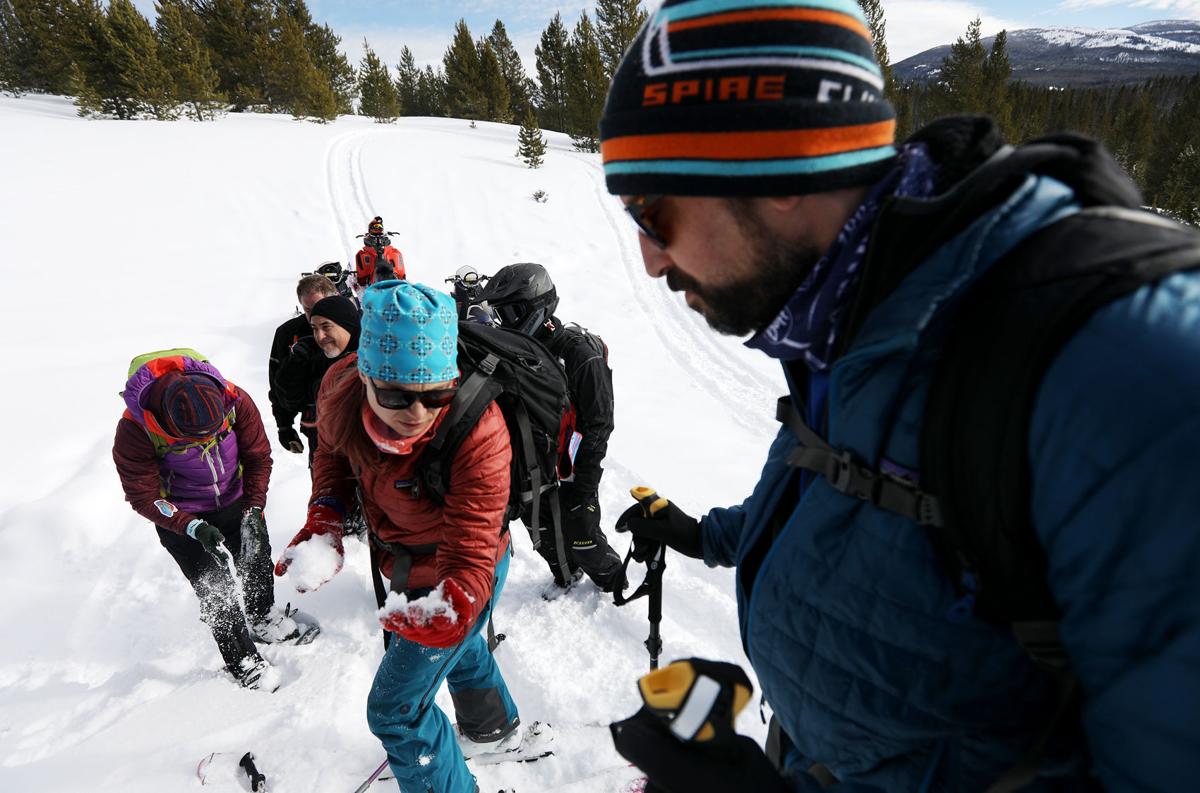 Kendra Kallevig and Jeremy Champion of Bozeman examine snow with their group. 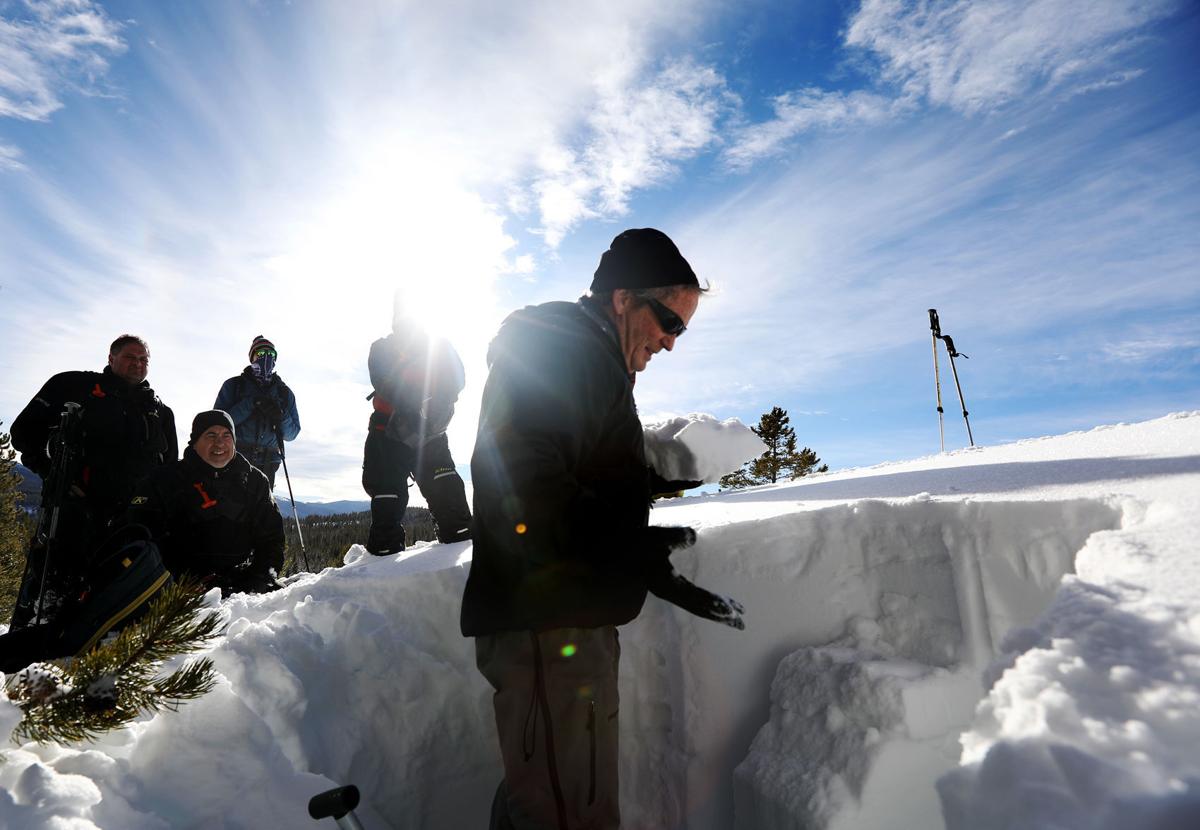 Rod Alne, avalanche clinic instructor, demonstrates how to dig a snow pit to check the various snow layers on the slope for avalanche danger as the group looks on. 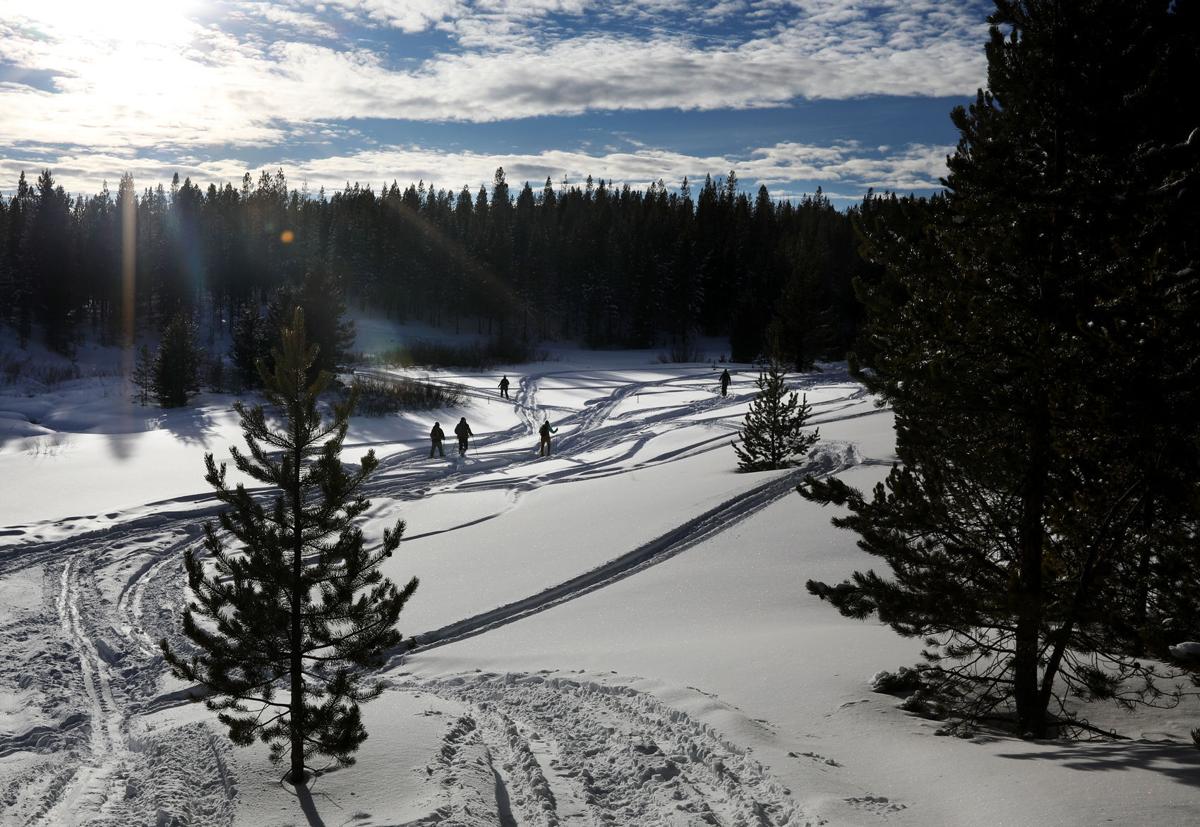 Participants in an avalanche clinic ski back to Sugar Loaf Lodge after the hands-on portion of instruction. 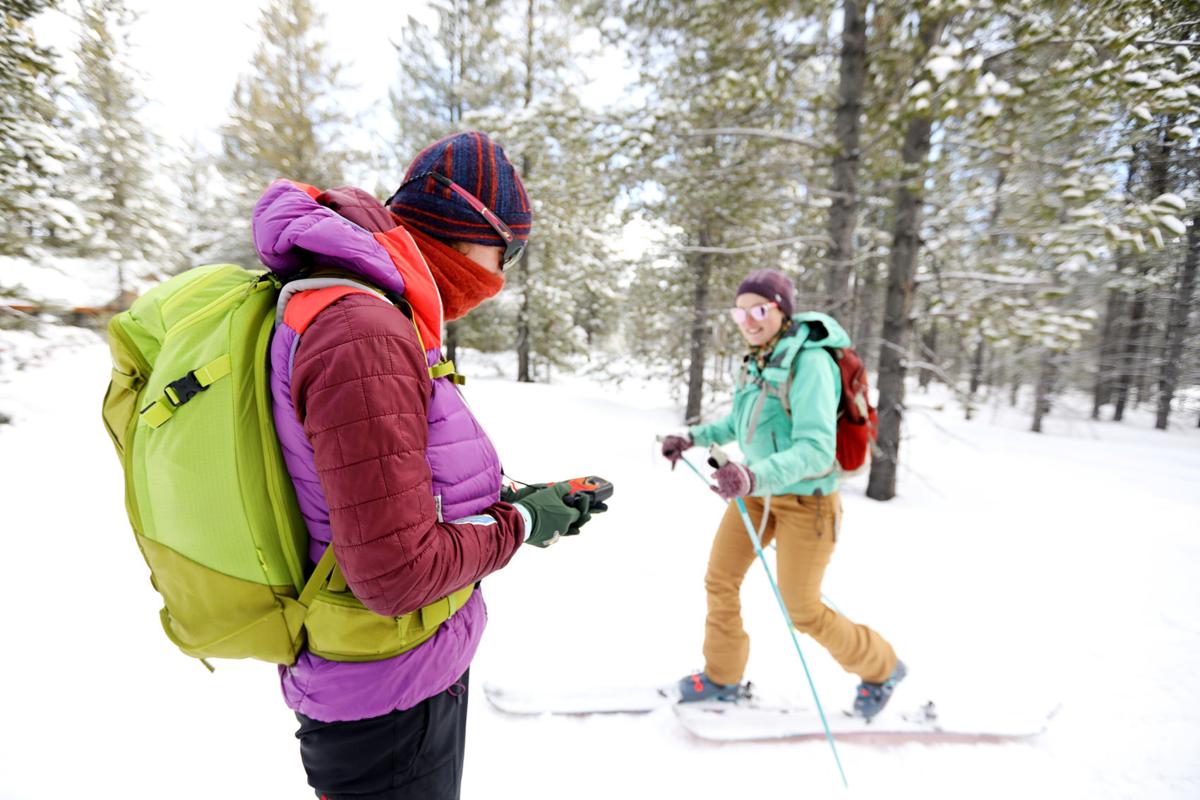 Hallie Zolynski, instructor of an avalanche clinic, checks a participant's beacon before she and her group travel into the backcountry for the hands-on section of the clinic. 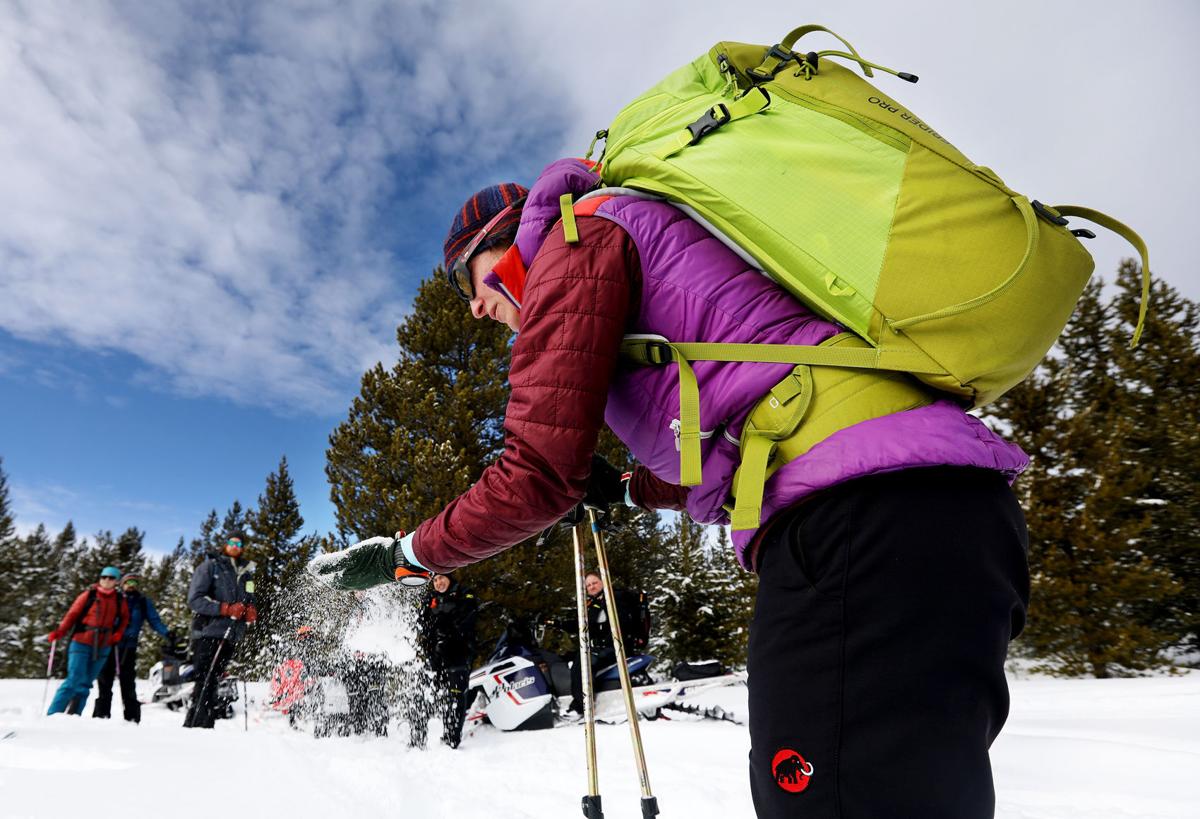 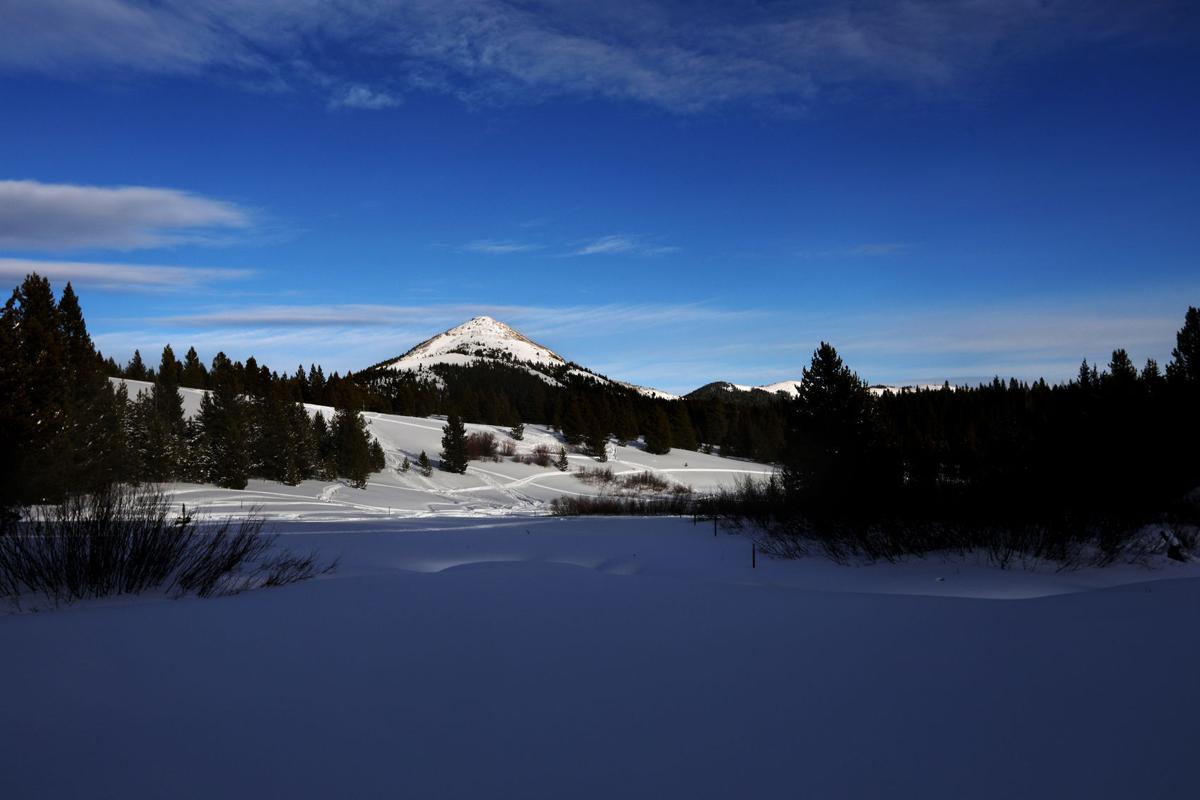 Evening shadows stretch across a section of land near the Sugar Loaf Lodge near Anaconda.