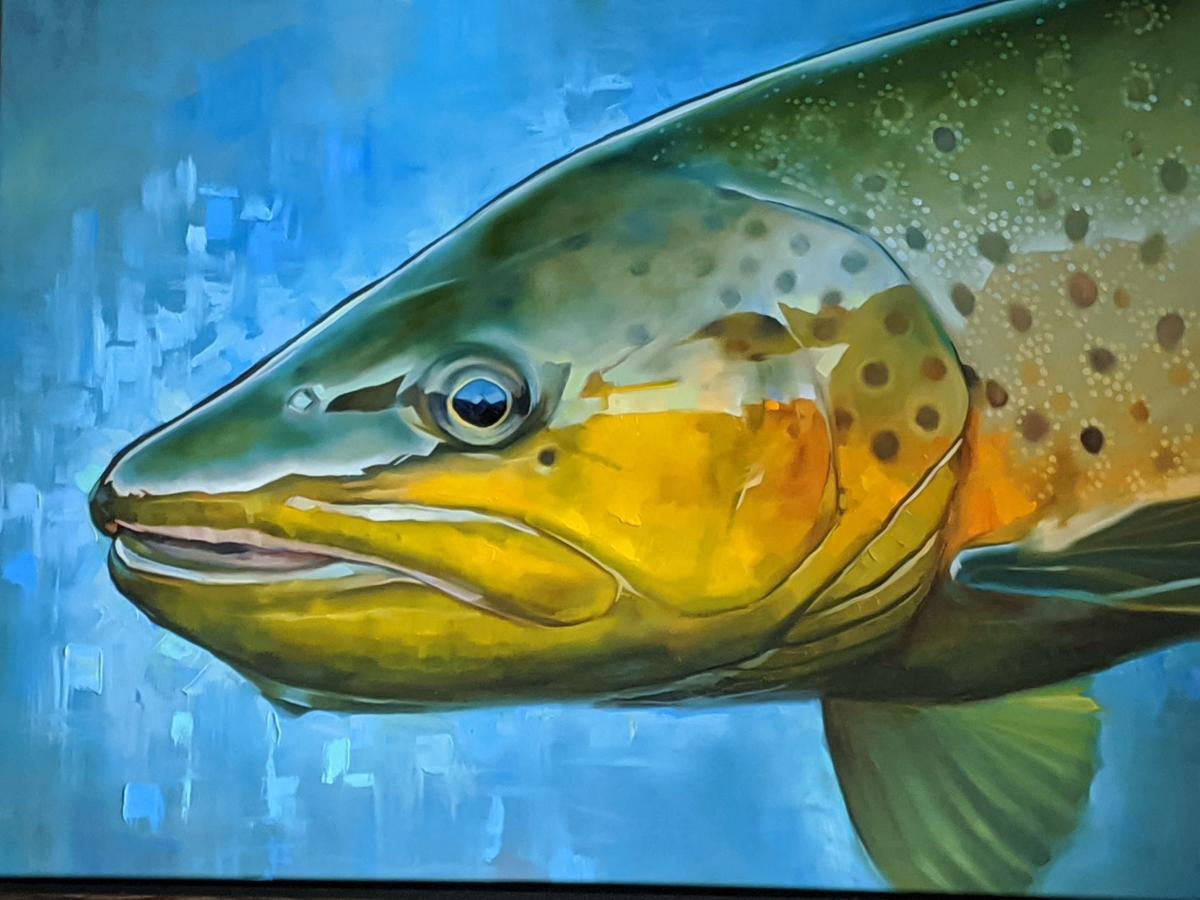 In the early 1930s, a large Brown trout was displayed in the window of a Butte sporting goods store, with a sign stating that it had been caught at Melrose on the Big Hole River. The reason for the display was due to the rarity of the species. Few anglers had ever caught a brown trout of any size out of the Big Hole.

It was predominantly a Rainbow trout stream and was regularly stocked with eggs stripped from native Shasta Range stock and planted as fry or fingerlings. They were initially maintained in outdoor rearing ponds at the Maiden Rock hatchery and raised until six or seven inch lengths before being released in the river. Unlike later hatchery plants, these were true wild trout and helped establish the Big Hole as one of the destination rivers for Rainbow trout.

Eventually the golden age of the Big Hole Rainbow, which extended over a period of some thirty-odd years, was over. During these years, it was the thinking of nearly all fisheries officials and angling groups that the preservation of sport fishing hinged on an extensive and continual fish planting program, a view which subsequently has proven to be false.

Within ten years from the time the first Brown trout was taken in the lower Big Hole, it was apparent that the species was there to stay and was now the predominant fish. This is a true wild Brown Trout population that entered the Big Hole about 1925, being part of the original plant in the upper Madison about 1889, eventually working their way up through the Jefferson River into the Big Hole. This pure strain has never been diluted with hatchery plantings and to this date has been able to hold its own without artificial support.

It has survived fishing pressure, streambed destruction, water deprivation, and rising water temperatures. Fishing is now permitted year around, which includes the spawning season, many spawning beds are targeted or even destroyed by uneducated anglers, and possession limits are still in place and few areas set aside for catch and release only.

This wonderful fish has survived only by its remarkable adaptability and the grace of God. Most recently (2014-2015), a large percentage of Brown trout in the Big Hole died due to a fungus infection. The cause of this fungus infection was never truly defined and certainly low water conditions and spawning stress played a significant role.

Five years later and the Brown trout populations from Jerry Creek to Melrose have not recovered. Clearly the trout that have survived to this present time, are representative of the best wild trout strain in the river. They should be allowed to reproduce, without human interference. How long this wonderful wild trout will be able to sustain itself without increased protection during their fall spawning period is questionable, but I firmly believe that the brown trout populations on the Big Hole are slowly but surely losing ground.

Trout are under the protective custody of the Montana Department of Fish, Wildlife and Parks and in many cases FWP is an effective ally of trout. But FWP seems to be more and more motivated by a philosophy that tends to make them act primarily in the interest of human society rather than doing what is best for trout.

FWP has repeatedly stated that there is no data to support closures during spawning times. I have a simple idea, Let's close some sections of the river during spawning times over the course of a few years and see if this helps the current declining population rebound to previous levels. Certainly, doing nothing is not an acceptable option, since no rebound has occurred since the fungus die-off 5 years ago.

The late and wise George Grant, who probably logged more hours on the Big Hole wade-fishing than any other human being, always felt that October 10th should be the beginning of a spawning closure, extending from Divide to Notch Bottom. Let's give this remarkable species of fish a chance to continue to flourish in our beloved and divine Big Hole River before it is too late. First the cutthroat, then the rainbow, and next the brown. Wild trout are finite resources, and the only way they can be preserved is through protection and conservation.

The Big Hole has been below 250cfs at Melrose for the past several weeks and we have already been through hoot owl closures since way back in early August. It remains clear that a long term solution to low late summer flows and high temperatures needs to be pursued. The logical solution is off-stream storage, both structural and non-structural, allowing us to hold onto some of the millions of gallons of water that leaves the drainage every spring and early summer.

There are some wonderful small projects being completed by the Big Hole Watershed Committee to restore and increase natural water storage. These admirable efforts are still not enough to counter the devastating effects of persistent drought in such a large watershed area. I believe we still need at least one large off-stream storage project, and the Pattengail Creek site near Wise River has previously been documented (1983 legislative effort) to be a safe site for a new dam, however the cost was not considered to balance out with the perceived need.

Well, here we are in 2020, the overall demand has increased and the tourism industry continues to skyrocket to levels never heard of before. It is time to champion a project that will benefit all of southwest Montana. It would be so gratifying to see one of our political candidates make an effort to help support such a project.

We are currently entering the fall spawning time for Big Hole Brown trout and the current water flows are without a doubt, suboptimal conditions for spawning. It would be great if Montana FWP would make some quick decisions to start some river section closures during spawning, a decision that would clarify they are truly an effective ally of trout.

In the meantime anglers should not pursue fish that are sitting on their spawning beds, avoid walking on spawning beds, play fish quickly and release gently, and avoid fishing on stretches of river where flows are suboptimal (less than 300cfs). It may be legal to fish during the spawn, but is it ethical? I guess that depends on the angler and where you fish. Honor should transcend the law. This is about treating the wild trout fishery with respect and I'm sure the trout will greatly appreciate less pressure during spawning time. We all need to be diligent in our efforts to protect and preserve this irreplaceable and precious trout population.

We just saw Sen. Steve Daines’s campaign ad taking credit for the hard work of Montana business owners. For the benefit of his re-election, ou…

Guest view: No matter what happens in election, we must focus on reconciliation

For the first time since the violent decade preceding the American Civil War, the November election is fueling fears of trouble. Is the Americ…

Guest view: 'It's the corruption, stupid'

“The economy, stupid.” That’s how Bill Clinton adviser James Carville summed up the overriding issues in the 1992 election. This year it shoul…

Guest view: Arntzen faulted for handling of funding after DeVos directive struck down

With announcements by Senators Romney, Grassley and Gardner, the outcome of the confirmation process for Donald Trump’s third nominee to the U…

In a recent guest opinion of Mr. Mike Black, I was saddened to read the lies and misrepresentations he has made about me in his campaign for t…

As the summer comes to a close and the weather begins to cool off, our weekends usually are filled with trips to the stadium or the gymnasium.…

Guest opinion: Consent decree a long time coming, but is good news on many levels

It has been a long time coming but the approval of the Butte Hill Consent Decree is great news for Butte on so many levels: