Become a Member
Read Today's E-edition
Share This
Western cartoonist saddling up, heading to South America
0 Comments
Share this
1 of 2 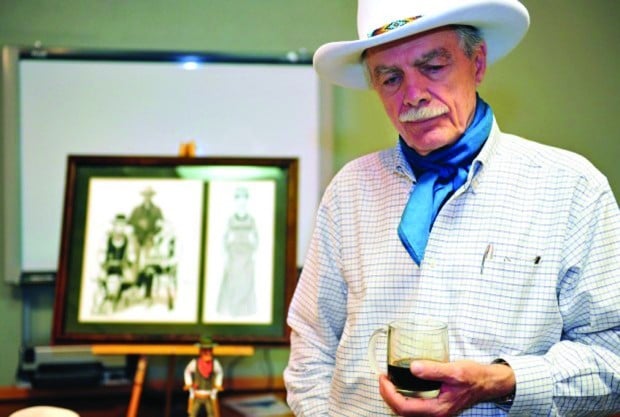 Stan Lynde, the creator of the Western comic strips ‘Rick O’Shay’ and ‘Latigo,’ reflects on his journey as a well known cartoonist this month at the Montana Historical Society. He and his wife, Lynda, have divided and donated all of the memorabilia associated with their past life between their children and the MHS and plan to pack what’s left into four suitcases and move to Ecuador. 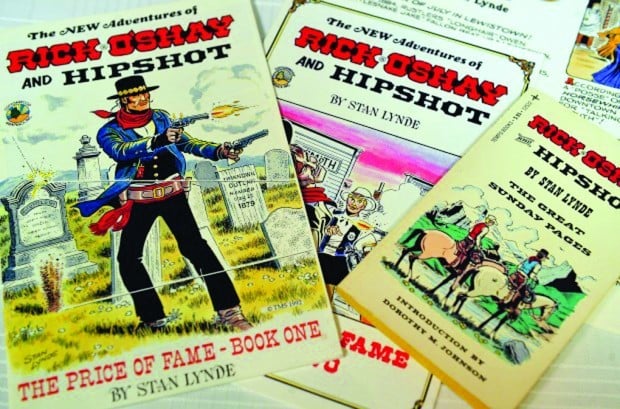 ‘Rick O’Shay’ was a popular Western comic strip created by Lynde in the late 1950s. The strip was inspired by the cowboys of his youth.

By Marga Lincoln Of the Helena Independent Record

Along the Divide feature:

In Hollywood movies, cowboys ride off into the sunset when they retire from gun slingin’ and chasin’ desperadoes.

But Western artist, author, and acclaimed cartoonist Stan Lynde and his wife Lynda have a more novel idea.

They’re flying south as snow birds New Year’s Eve, migrating to Ecuador, with plans to return each fall to Montana.

“We’re off to adventure,” said Lynde.

Lynde, 81, is known not only across Montana, but also nationally for his two popular syndicated Western cartoon strips, “Rick O’Shay” and “Latigo” that appeared in major newspapers reaching some 15 million readers.

The Montana-based cowboy cartoons also had an international following and were printed in Australia, Canada and the Philippinesas well as in French, Italian and Spanish newspapers.

Earlier this month, Lynde donated some of his original art, memorabilia and possessions to the Montana Historical Society. Among the items were his saddle, an 1851 Navy Colt revolver, his trademark hat, as well as chaps, spurs, registered brand and mementos from the September 1989 Great Montana Centennial Cattle Drive, which he helped organize and head up.

The gifts, and a recent estate sale, were the final wrapping up of loose ends of theirHelenalives from the past 15 years.

A storyteller from the start

He had been calling the Ecuador trip his epilogue, but, of late, Lynde’s referring to it as the first chapter of his brand new book.

A born storyteller, he’s descended from a family of storytellers, according to his sister Lorretta Lynde, a journalist and author in Helena.

“We all have a lot of stories in us,” she said of her family.

Stan, Lorretta and another sister, Chris, grew up on a ranch near Lodge Grass on the Crow Indian Reservation, hearing the rich story traditions of the Crow Indians, the cowboys and of their own family’s Irish heritage.

“Our father was a great oral storyteller,” she said. “Mom wrote a lot of stories as well.” She also instilled in them a love for literature and reading.

And then there were the cowboys.

“He was around cowboys a lot — a lot of them old cowboys,” said Lorretta. “They were the real thing. They were great storytellers.”

“Cowboys were my heroes,” Lynde said, and sometimes his only playmates. “I followed them around and they played games with me,” giving him important missions as an Indian scout.

They, and the people of Lodge Grass, were the models for his characters — Rick O’Shay, Hipshot, Gaye Abandon and the other folks in his imaginary town of Conniption. “Most were composites,” he said, “of the old time cowboys and the people I knew growing up.”

Some would also appear in his eight Merlin Fanshaw western novels.

“It was a wonderful way to grow up,” he said of his childhood. “Lodge Grass was a Norman Rockwell town.”

Born in 1931, in the heart of the Depression, Lynde grew up on a sheep ranch that also ran cattle.

It was in the isolated sheep camps that he took up drawing. His mother gave him crayons and paper to keep him occupied, recalled Lorretta.

“Mom had artistic talent,” said Lynde. When they were living in a sheep wagon, she taught him how to draw and would read to him because she didn’t want him wandering loose in rattlesnake country.

Every Sunday at the ranch the Billings Gazette and Denver Post arrived with their full-pages of comic strips that his parents would read out loud to him.

It never occurred to Lynde where these magical stories came from, until one day he was told that someone was paid to write and draw them.

All through high school he drew daily comics that he handed around in a spiral notebook to the delight of fellow students and the consternation of some of his teachers. He also published cartoons in the Lodge Grass high school newspaper.

After stints at the University of Montana studying journalism and art, joining the Navy for four years during the Korean War, a short detour to the family sheep ranch and a journalism job in Colorado, he took his courage in hand.

He said he didn’t want to be 60 someday without ever trying to make it as a cartoonist.

He bought a one-way bus ticket to the Big Apple, arriving with $300 in his pocket.

Surviving on a diet primarily of popcorn, automat food and the generosity of a friend’s big, boisterous Irish family, he scraped by till he landed a job as a typist at the Wall Street Journal.

He worked his way up to be a commodities reporter and attended the School of Visual Arts at night.

By 1956-’57 Lynde developed his comic strip Rick O’Shay, inspired by the cowboys of his youth. Each horse, gun and saddle were careful replicas of the real thing.

Lynde was turned down by 12 of the big cartoon syndicates, but number 13 was his big break.

He met Maurice “Moe” Reilly, vice president of the Chicago Tribune/New York News syndicate, who’d spent summers in Montana, where his uncle was foreman at the Matador Ranch.

“He recognized what I was trying to do,” said Lynde. “He was a very creative editor and mentor and he brought me along.”

Over the years, 1958 to 1977, Rick O’ Shay grew from a circulation in 30 papers to 100, including some of the biggest newspapers in the country — The New York News, Chicago Tribune, L.A. Times, Philadelphia Inquirer — and of course, a number of Montana newspapers including the Independent Record.

“Revenue of a strip depended on circulation of the paper,” he said. “Ultimately, I could make a pretty decent living on it.”

In 1962 Lynde returned to Montana, setting up an art studio in his basement in his Billings home. He also purchased a 160-acre ranch near his father’s land with his own herd of cattle, branded RIK in honor of his famous cartoon hero.

He got a hero’s homecoming. The 1963 Hardin parade had a Rick O’Shay theme.

Hailed as Montana’s only syndicated cartoonist, “his friends and neighbors plan to let him know how proud they are of his success when he is guest of honor at Hardin’s annual celebration,” wrote the Hardin Tribune Herald.

It was unusual, news articles noted, for cartoonists to find such success as Lynde had in his 20s. Most of the cartoonists weren’t picked up by syndicates until they were in their 40s or older.

Rick O’Shay dress-up parties, parades and events abounded in Montana during that time. He was the star and theme of the University of Montana homecoming parade in 1971, with Lynde leading the parade, despite his less-than-sterling academic career there.

One of Lynde’s characters, the gunslinger Hipshot, was even granted a gubernatorial pardon by Gov. Tim Babcock.

After a 1977 contract dispute ended Lynde’s involvement in “Rick O’Shay,” Lynde launched a new strip, “Latigo” in 1979 with Field Syndicate, which ran until 1983. He also wrote a Western comic strip Rovar Bob and other comics for Swedish publications.

In 1977, Lynde received the Inkpot Award for achievement in the comic arts and the Montana Governor’s Award for the Arts in 1983.

“He was very well loved,” said MHS senior curator Jennifer Bottomly-O’looney. “His legacy is really unique — to capture a story in a cartoon is a pretty amazing talent.”

In a 1967 retrospective exhibit of his prints, posters and cartoons at the Montana Historical Society, Lynde wrote: “My goal is connection with those who view my work in whatever form. Most of all, I am interested in communicating, sharing emotion and experience on a deeper level, telling a story.”

And it was from this desire, that the characters of his comics inspired the stories and personalities in the eight Merlin Fanshaw novels.

Lynde earned a 1962 Spur Award for this audio book, “Vendetta Canyon,” and was inducted into the Montana Cowboy Hall of Fame in 2012.

“I feel very blessed,” said Lynde. “I’ve been able to do the work I love for an appreciative audience. I love this state and people of this state. If my tombstone said something about Montana, I’d be really happy. I’ve never met any state with people who have such character.”

In addition to the Lyndes’ gifts to MHS, they set up a trust that will gift future royalties to the Montana Historical Society and the Friendship Center.

“It’s giving back to Montana that gave so much to me,” Lynde said.

Billings Police Department officers continue to hunt for suspects in the shooting death of a 15-year-old boy early Sunday morning.

Costs incurred while fighting the COVID-19 pandemic have pushed nursing homes to operate at a loss across the country, and Montana is no exception.

A survey of Montana grizzly attitudes show residents value having grizzlies around, but think hunting is necessary and useful - something bear biologists haven’t found much evidence to support.

Stan Lynde, the creator of the Western comic strips ‘Rick O’Shay’ and ‘Latigo,’ reflects on his journey as a well known cartoonist this month at the Montana Historical Society. He and his wife, Lynda, have divided and donated all of the memorabilia associated with their past life between their children and the MHS and plan to pack what’s left into four suitcases and move to Ecuador.

‘Rick O’Shay’ was a popular Western comic strip created by Lynde in the late 1950s. The strip was inspired by the cowboys of his youth.