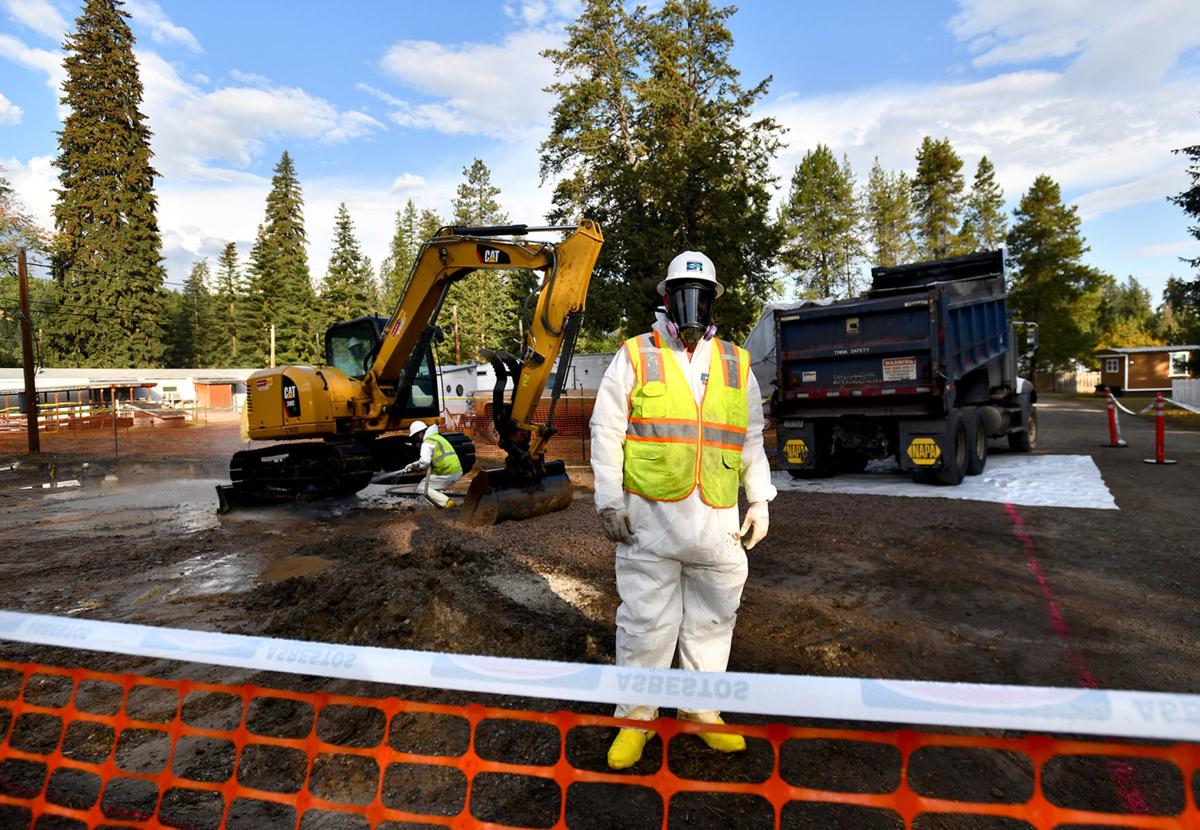 Environmental cleanup specialists work at one of the last remaining residential asbestos cleanup sites in Libby in mid-September 2018. Asbestos contamination has been removed from some 2,600 properties in Libby since the danger to residents was exposed in 1999, but health experts say the health effects of exposure to the deadly mineral could last another generation or two. 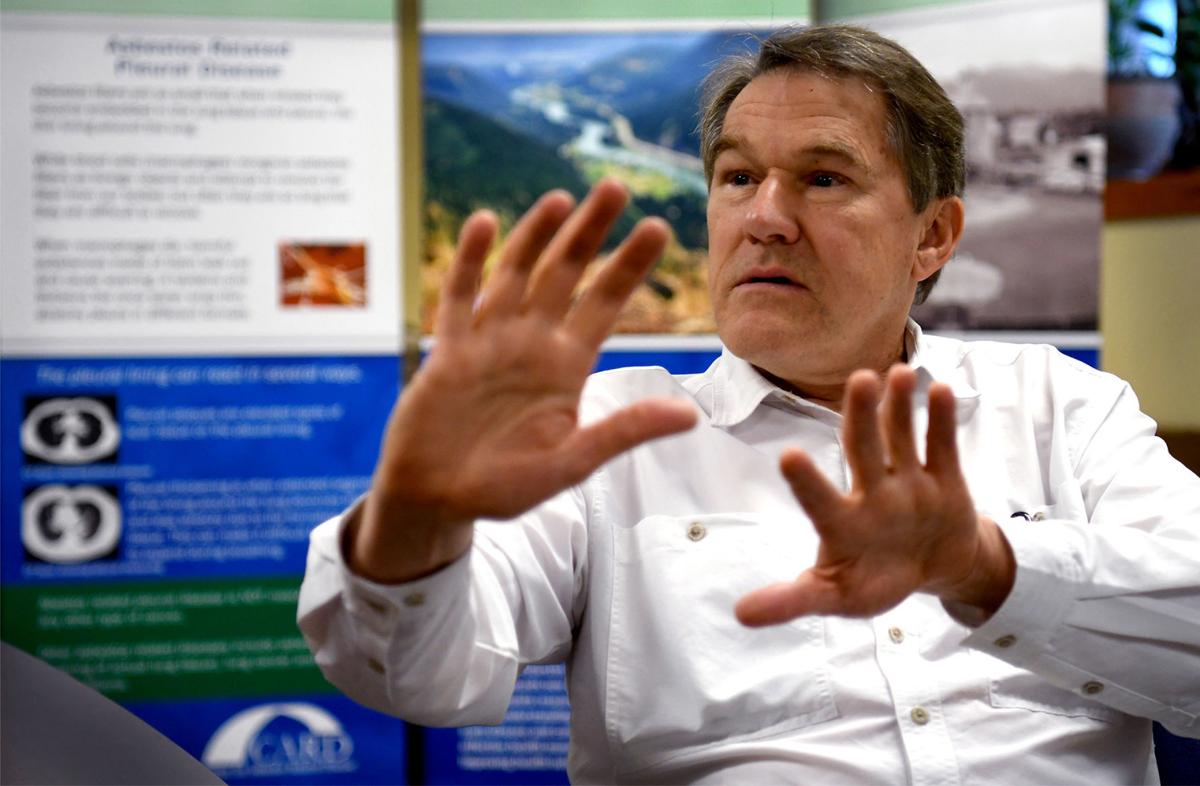 Dr. Brad Black, director of the Center for Asbestos-Related Disease in Libby, says the long latency period with Libby's variety of asbestos, sometimes as long as 40 years, means that the disease may not reach its peak in Libby for some 20 years.

A bill to ban mining, importation, use, and sale of asbestos was introduced in both the House and Senate Tuesday, and at first blush it seems to have far better prospects for passage than similar bills have had in previous years.

"It's outrageous that in the year 2019 asbestos is still allowed in the United States," said Sen. Jeff Merkley, D-Oregon, one of the bill's principal sponsors. "While the EPA fiddles, Americans are dying."

The substance, still legal in the United States, has been banned in more than 60 countries worldwide.

Sen. Jon Tester, D-Montana, and eight other senators joined in sponsoring the bill, and some 21 House members also have signed on as sponsors.

“Montanans know all too well the lasting damage of asbestos exposure — just ask folks in Libby and Troy," Tester said Thursday. "Banning this harmful substance will protect our families and prevent future suffering and loss of life."

Staffers for Sen. Steve Daines, R-Montana, said he was reading the bill's text Thursday and considering next steps.

"His number-one priority is the safety of all Montanans, preventing tragedies like Libby and Troy from happening in the first place and finalizing cleanup of those sites," a Daines spokesperson said.

More than 200 deaths in the Troy and Libby area have been ascribed to exposure to asbestos from a former vermiculite mine near Libby that pushed out thousands of tons of contaminated dust. A health screening has shown more than a thousand residents with signs of asbestos-related lung disorders, and more area residents are being diagnosed with the deadly disease every week.

Dr. Brad Black, director of the Center for Asbestos-Related Disease clinic in Libby, said, "The introduction of an asbestos-ban bill provides our Congress with an opportunity to prevent needless suffering and death from asbestos-related disease. I commend those who are forwarding it."

In 1994, the EPA attempted to ban use of the mineral administratively, but an industry-led court challenge was successful in overturning that action.

After the Libby story broke in 1999, Sen. Patty Murray, D-Washington, worked for many years to get a ban bill through Congress.

Since then, other ban efforts have been introduced but have not gained significant traction.

Before his election, President Donald Trump was vocal in defense of asbestos, calling it "perfectly safe when properly applied" and theorizing that the opposition to its use was inspired by the Mafia, which he said may control the asbestos abatement industry.

Many health experts voiced support for the bill Thursday.

Dr. Richard Lemen, a former assistant surgeon general of the United States and deputy director of the National Institute for Occupational Safety and Health, said he was "very pleased."

"There seems to be more enthusiasm for a ban on asbestos in the United States," he added. "It's certainly high time the United States follows the pattern of many other countries and bans this carcinogen. We now know that the number of deaths due to asbestos has been severely under-reported in the past. Latest figures show some 39,000 Americans die from asbestos-related disease each and every year."

Barry Castleman, who holds a doctorate from the Johns Hopkins University School of Public Health and has been a longtime consultant to the U.S. and other governments on asbestos and other issues, said Thursday, "I like to call the ban bill the Catch Up to Croatia Act — because the United States is so woefully behind countries all over the world who have seen the light and decided to do away with this deadly material.

"Every asbestos death is preventable," he added.

Dr. Raja Flores, one of the nation's experts on mesothelioma and chief of thoracic surgery at Mt. Sinai Hospital in New York, said, "This bill will save more lives than I ever could with my scalpel."

Frank Pallone, D-New Jersey, who chairs the House Energy and Commerce Committee, said that "it's been 40 years since EPA began the process of banning asbestos, yet this dangerous chemical is still being imported and used all over the country. American communities and American workers can't wait any longer for EPA to act."

For Linda Reinstein, director of the Asbestos Disease Awareness Organization and a leader in the fight for a ban, the cause is deeply personal.

The bill is named the Alan Reinstein Ban Asbestos Now Act after her husband, who died in 2006 from mesothelioma, an asbestos-caused cancer.

When he was diagnosed, she said, "Our world turned upside down. His death was a seismic shock. A ban on asbestos means no family needs to experience the heartbreaking loss of a loved one from asbestos-related disease ever again."

Speak up: Walkerville residents asked to weigh in on no-shooting zone

Walkerville residents can still weigh in on a proposal to include the town in a no-shooting zone that now covers urban Butte and some outlying areas.

Butte man accused of having sex with minor, planning her runaway

Leggings and boots, a hunting camouflage hoodie sweatshirt, basketball shorts and team shirts, and painted fingernails stuck out from behind d…

Environmental cleanup specialists work at one of the last remaining residential asbestos cleanup sites in Libby in mid-September 2018. Asbestos contamination has been removed from some 2,600 properties in Libby since the danger to residents was exposed in 1999, but health experts say the health effects of exposure to the deadly mineral could last another generation or two.

Dr. Brad Black, director of the Center for Asbestos-Related Disease in Libby, says the long latency period with Libby's variety of asbestos, sometimes as long as 40 years, means that the disease may not reach its peak in Libby for some 20 years.