Become a Member
Read Today's E-edition
Share This
Quacks, trills and peeps could help save migratory habitat
0 Comments
Share this
1 of 2 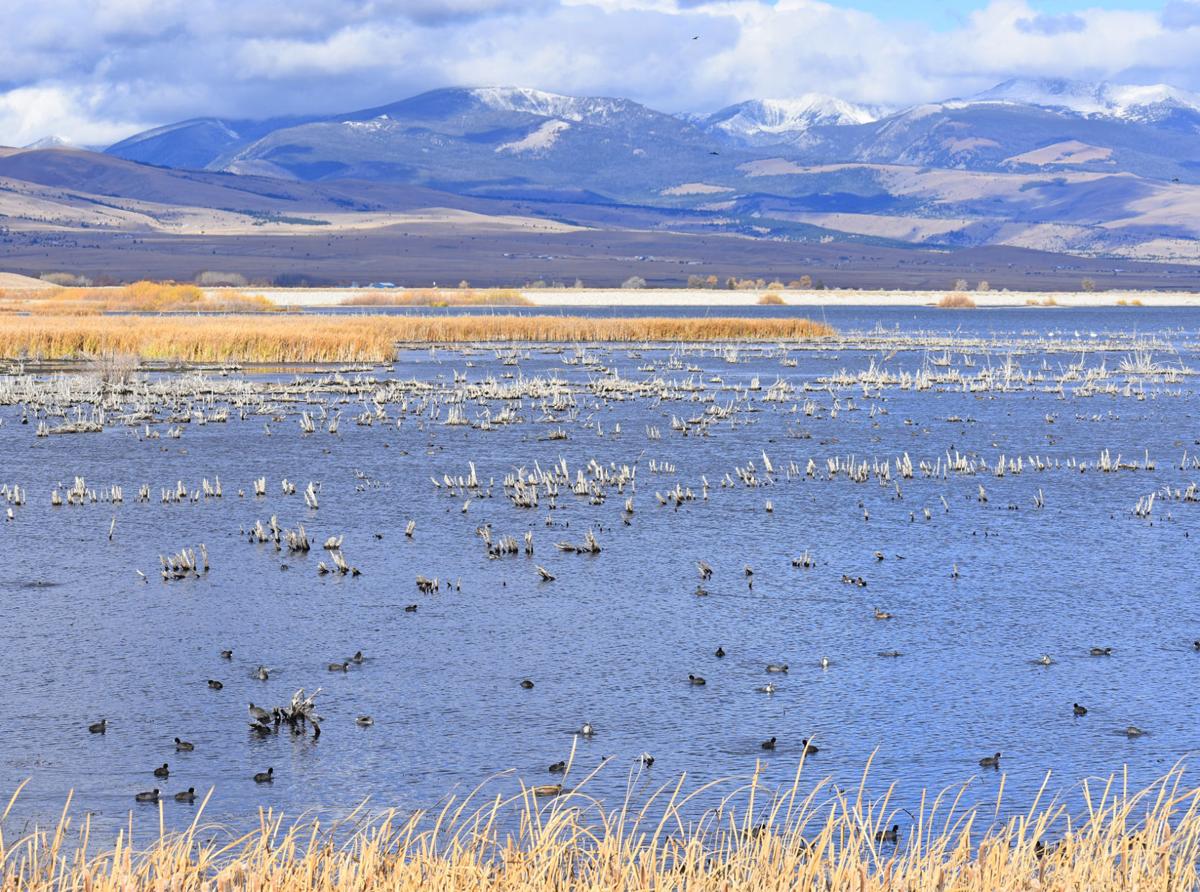 Migratory waterfowl, including American coots, favor the Warm Springs Ponds. The settling ponds, owned by the Atlantic Richfield Co., are part of a federal Superfund site. The company recently collaborated with the Cornell Lab of Ornithology and deployed recording units and game cameras to try to get a sense of bird biodiversity and density at the Ponds. 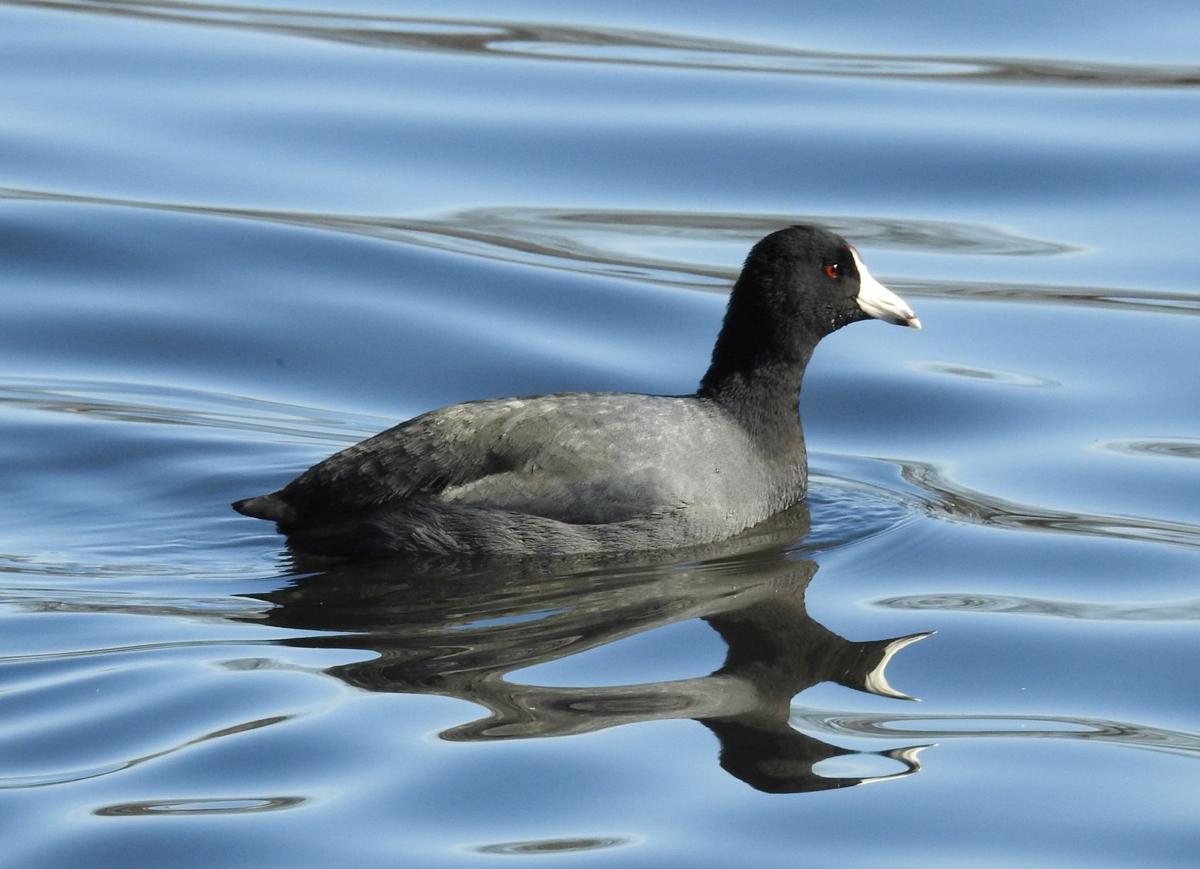 The American coot can appear in great numbers at the Warm Springs Ponds during migrations.

At first blush the pond network, designed to settle out metals from upstream sources before the pollutants reach the Clark Fork River, seems like an unlikely migratory magnet. It is, after all, a unit of a federal Superfund site.

But the settling ponds certainly offer a better choice for a flyway respite than the toxic and acidic Berkeley Pit to the east, where thousands of snow geese have perished in years past.

The Atlantic Richfield Co. and the Cornell Lab of Ornithology teamed up this fall to try to get a better sense of the biodiversity and density of birds at the Warm Springs Ponds.

Gary Swant, citizen scientist, birder and founder of GoBird Montana, was hired in 1999 by Montana Fish, Wildlife & Parks to do field bird surveys at the Warm Springs Ponds. He and his grandson, Caleb Lashway, have continued the counts.

“The ponds are a significant staging area for migratory birds,” Swant said. “We have days when we have 80,000 birds out there.”

They can make quite a racket. Through squawks and croaks, through songs and calls.

Atlantic Richfield, which owns the settling ponds network, and the Cornell Lab of Ornithology, entered a partnership to record, photograph and count the birds.

The National Audubon Society once described bird songs as works of art. Not all bird song is melodious, of course. The notes hit by some species veer toward harsh, sounding like the blare of a mangled trumpet in the midst of a Mozart symphony. The cries of some raptors pierce the ear and jangle the amygdala too.

Sophisticated analysis of bird sounds can help yield habitat information useful for protecting critical environments for migratory birds. These birds tend to “play a game of hemispheric hopscotch, skipping from one migratory stopover to the next, like a family minivan hitting rest stops on a cross-country road trip,” observed Marc Devokaitis, an associate editor for the Cornell Lab.

In early September, the Cornell Lab and a contractor working for Atlantic Richfield deployed 15 autonomous recording units and three game cameras at the Warm Springs Ponds network between Butte and Deer Lodge off Interstate 90.

Atlantic Richfield paid for the deployment.

Connor Wood, a research associate with the K. Lisa Yang Center for Conservation Bioacoustics at the Cornell Lab of Ornithology, said colleague Stefan Kahl’s work with BirdNET has provided a powerful tool.

“It has really transformed the work I do (in bioacoustics),” Wood said.

The field of bioacoustics has been described as a game changer for researchers tracking the health of ecosystems.

The Cornell Lab, affiliated with Cornell University in Ithaca, New York, hopes the combination of autonomous recording units, game cameras and bird counts completed by a trained observer will also provide a sense of bird density.

“The exciting new challenge for me and for bioacoustics is measuring the density of birds because that is much more difficult than measuring biodiversity,” Wood said.

In an email Tuesday, Cameron Nazminia, a spokesman for Atlantic Richfield, said the company works with academic institutions, governments and local advocates, among others, to pursue innovative methods – such as bioacoustics – to better understand ecosystems.

“If the tests are successful, the techniques might be useful at various sites where there is a need to monitor species populations and visits,” Nazminia said.

“We are working with Cornell to see if we can collect data in order to estimate the numbers and species of birds at different times of year, and to improve our understanding of the dynamics of ecosystems that support migratory birds,” he said.

At first blush, the Warm Springs Ponds would not seem like a great stopover for migrating birds. The settling ponds network is a Superfund site because of contaminated sediments from historic mining and smelting upstream.

The ponds trap copper, arsenic, cadmium, lead and zinc to limit the amount of these metals reaching the Clark Fork River. Because of their high degree of toxicity, arsenic, cadmium and lead are among the priority metals of public health significance.

Yet birds and birdwatchers flock to the Warm Springs Ponds.

“It’s one of the major hot spots for birding in southwest Montana,” Swant said.

He has identified 242 bird species at the Warm Springs Wildlife Management Area. There are roughly 442 species of birds in Montana, though there is some squawking about the accuracy of that tally.

Wood said the research at Warm Springs Ponds, and research like it around the world, can inform work meant to save or enhance bird habitat.

And birds haven’t been doing well.

The magazine Science published a study in October 2019 that received widespread publicity. The research reported that there had been a net loss of nearly 3 billion birds since 1970 among North American “avifauna.” It attributed the decline to habitat loss, climate change, unregulated harvest, pesticides and other forms of human-caused mortality. Other likely contributors included cats.

More than 80% of the losses described in the study were among migratory birds.

Andrew Farnsworth, a senior research associate at the Cornell Lab, observed, “Finding out what happens to these birds during these migrations has to be a focus if conservation measures are going to be effective.”

There is general agreement that the Anaconda Co. built the first settling pond in 1911 after a catastrophic 1908 flood washed contaminated tailings and other pollutants downstream along the Clark Fork River all the way to the Milltown Dam. A second pond was constructed around 1916, followed by a third in the 1950s.

Atlantic Richfield purchased the Anaconda Co. in 1977 and ended up becoming the “potentially responsible party” under Superfund law for massive contamination in Butte, Anaconda and along Silver Bow Creek and the Clark Fork River.

Because Superfund cleanup of upstream sources of contamination isn’t complete, the ponds continue to play a role in precipitating out metals from the waters that flow in.

Part of the EPA’s mission since a 1992 Record of Decision for the ponds has been to reduce the potential for direct contact, inhalation and ingestion of exposed tailings and contaminated soils. A Record of Decision is a public document that describes a plan for cleaning up a Superfund site.

“Since the 1992 Record of Decision, the increase of waterfowl and associated birding and hunting at the site is considered a new pathway and will be evaluated prior to a final remedy,” Archer said.

The EPA has not yet announced a final plan for remediation of the ponds, which are said to harbor about 19 million cubic yards of contaminated sediments and mining wastes from historic mining and smelting upstream.

The final remedy could range from a strategic cleanup of the ponds that would not render radical changes, to something much more comprehensive.

A survey conducted this summer by students at the University of Montana Western found that many residents of the region value the recreational opportunities at the ponds. Those opportunities include catch-and-release fishing, mountain biking, walking, birding, hunting and more.

Yet others favor removal of sediments because of the potential for the contaminants to wash downstream in the wake of a catastrophic event like an earthquake.

Swant said a radical makeover of the ponds could mean a significant loss of bird safety and critical habitat.

“When EPA selects a final remedy for the site, wildlife population data is likely to be considered as part of their analysis,” he said.

Archer identified the relevant criteria for choosing a cleanup plan.

“EPA considers nine criteria when selecting a remedial alternative and one of the modifying criteria is: Community Acceptance,” she said.

She acknowledged that “many birders enjoy the Warms Springs Ponds and the large variety and quantity of birds the habitat attracts. The community will be able to provide public comment on the preferred alternative and this will be considered in the selection of a final remedy.”

Christie Holmgren, a resident of Deer Lodge, has been an avid birder and bird photographer for about 30 years. Her birding outings have taken her to several U.S. states, Cuba, Costa Rica and elsewhere.

And they all might have been recorded for posterity – quacking, trilling, peeping and squawking their way into science history.

One theme swam through the Warm Springs Ponds survey responses like a brown trout finning up a narrow tributary.

Zep, a blue heeler, whined and lifted his paws after standing at the fringe of a slickens along the Clark Fork River. Acidic mining and smelti…

Migratory waterfowl, including American coots, favor the Warm Springs Ponds. The settling ponds, owned by the Atlantic Richfield Co., are part of a federal Superfund site. The company recently collaborated with the Cornell Lab of Ornithology and deployed recording units and game cameras to try to get a sense of bird biodiversity and density at the Ponds. 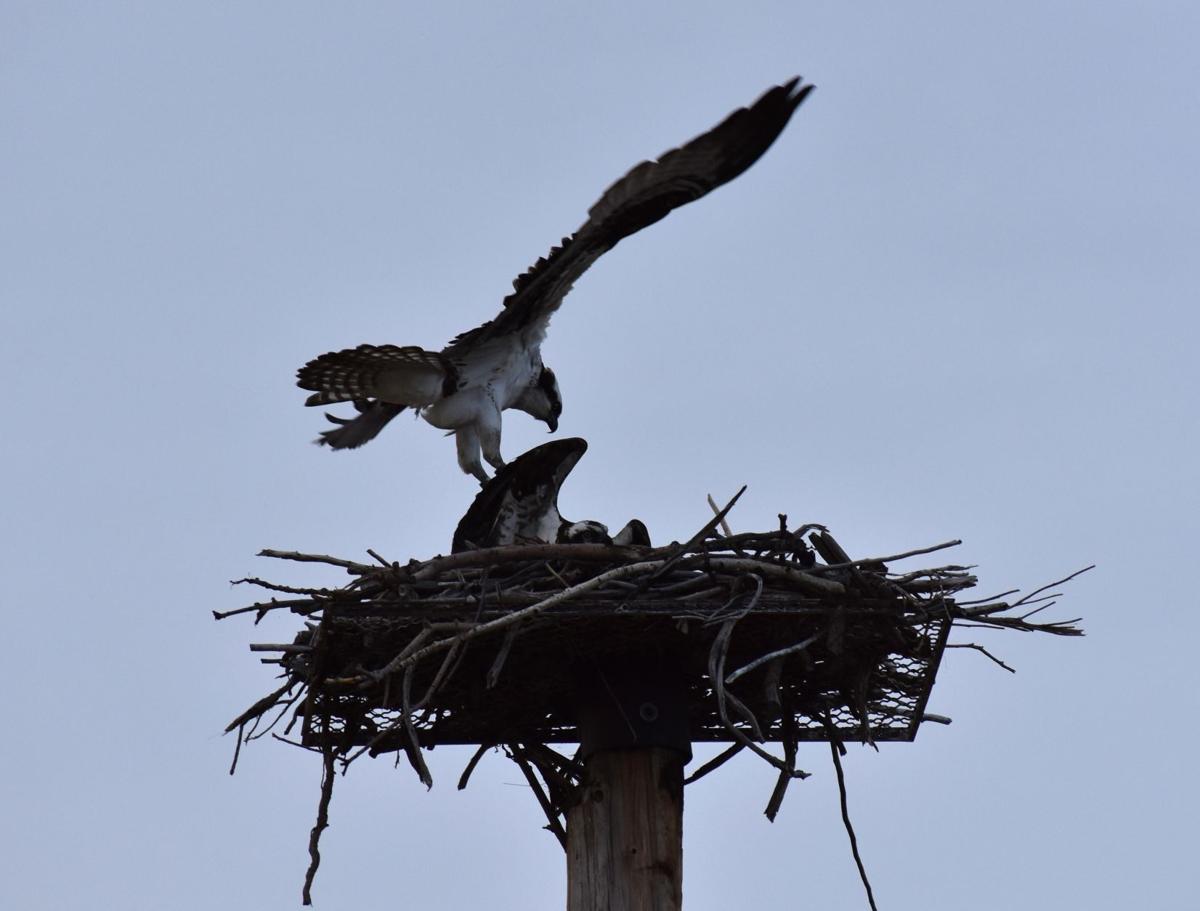 On osprey lands on a nest this spring at the Warm Springs Ponds, a favorite spot for many regional birdwatchers and the site of recent research by the Cornell Lab of Ornithology in partnership with the Atlantic Richfield Co., which owns the settling ponds. 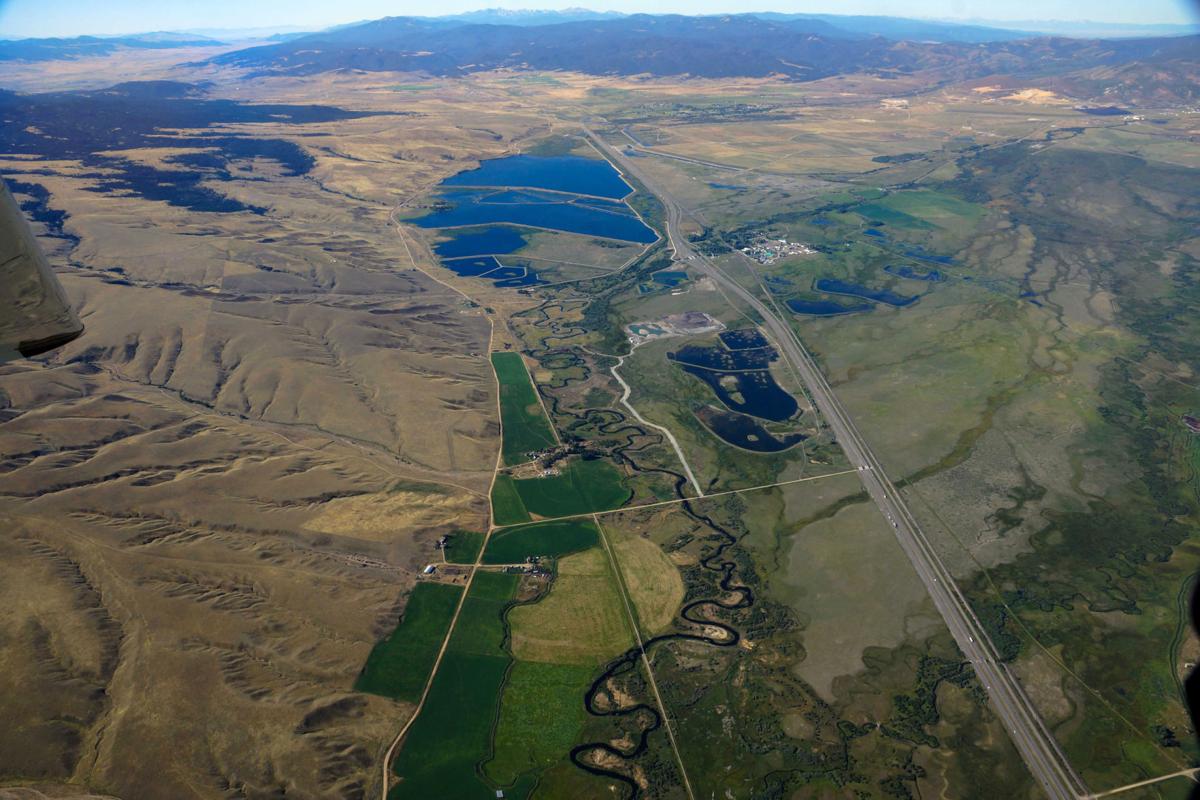 An aerial view of the Warm Springs Ponds. What will happen to the settling ponds, which contain about 19 million cubic yards of sediments contaminated by historic mining and smelting upstream, is still undecided. The EPA has said it is waiting for the completion of Superfund cleanup upstream before deciding on a final remedy for the ponds. 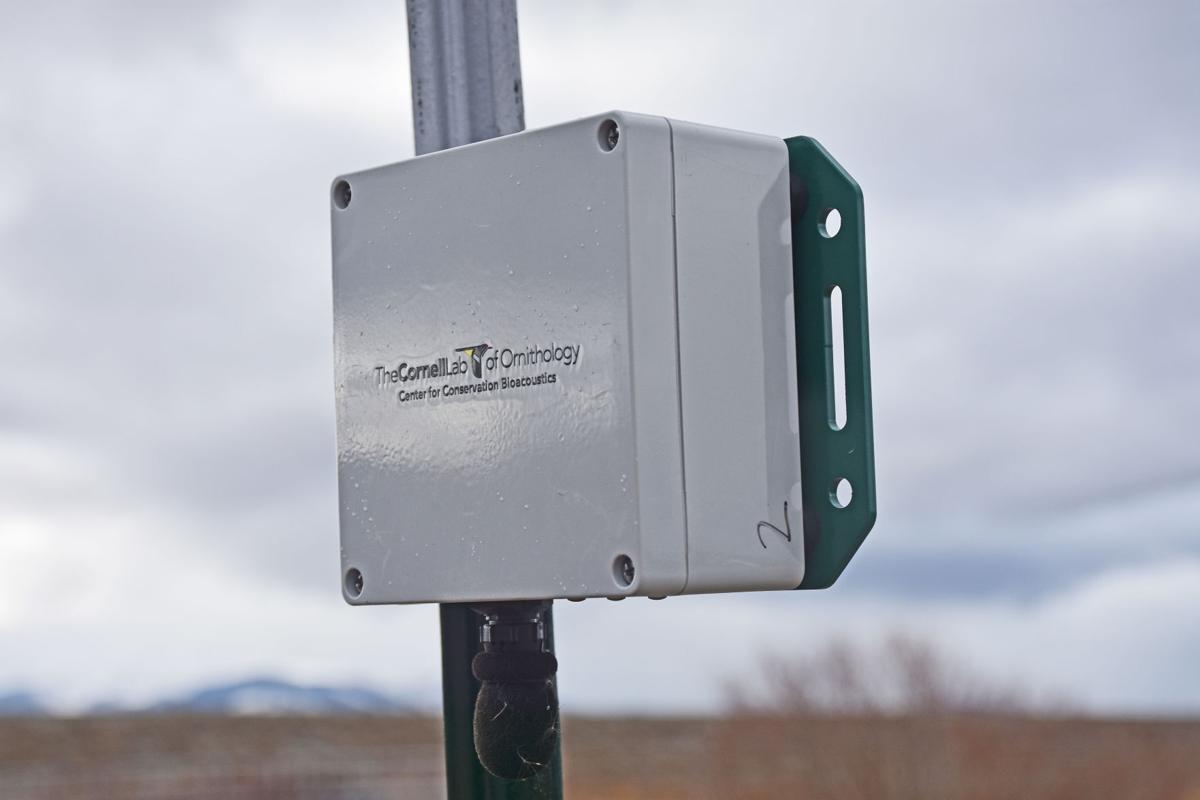 The Cornell Lab of Ornithology and Atlantic Richfield deployed 15 autonomous recording devices in September at the Warm Springs Ponds network between Butte and Deer Lodge off Interstate 90. Recording of bird sounds will be analyzed to help get a sense of the species diversity and density of birds at the ponds. 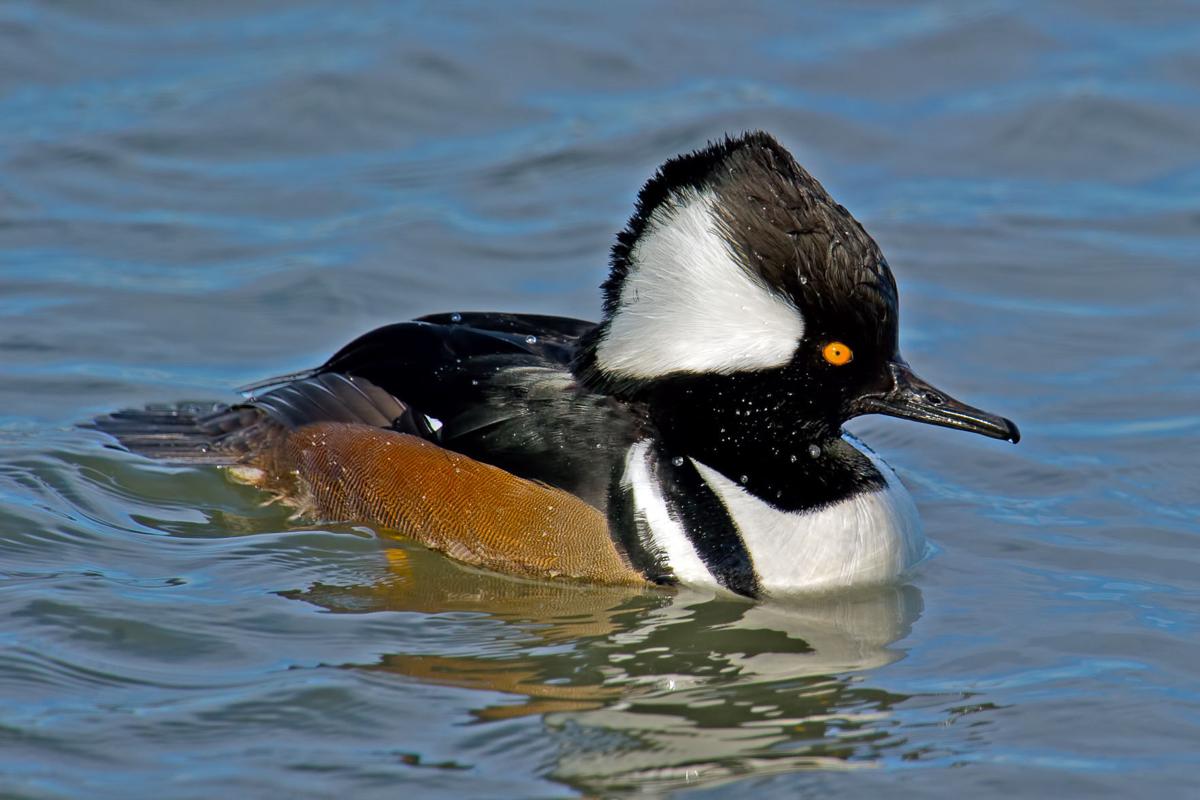 The hooded merganser is among the many bird species that can be spotted at the Warm Springs Ponds during certain times of year.

The American coot can appear in great numbers at the Warm Springs Ponds during migrations.