Entomologists exult when the buzz is good.

And so it was on the crisp morning of July 12.

Wildflowers galore graced the subalpine meadows along the Gravelly Range Road. Pollinators flitted or rocketed from flower to flower. A steady breeze discouraged all but the most determined mosquitoes.

If a person had felt compelled to twirl like Julie Andrews in the Alps, as was Maria’s cinematic habit, they would have witnessed mountain vistas in all directions.

“I feel like I’m in ‘The Sound of Music,’” said a smiling Casey Delphia, an entomologist and research scientist with Montana State University.

Yet the only music along this high-elevation plateau issued from birds and bees and the rustle of wind. Entomologists, botanists and support staff bailed from pickups and cars. They toted bowl traps, kill tubes, Blue Vane traps and aerial nets.

Entomology is the scientific study of insects.

Their mission was to collect wild bees, ideally of varied species. It was part of an effort to establish a more comprehensive inventory of the insects in Montana. How many species of bees native to the state are buzzing around, nesting in social colonies like bumble bees, or in small openings in the ground like metallic green bees?

In other words, the bee surveys that happened in the Gravelly Range and elsewhere during the week of July 11 to July 15 were not specifically examining the size or health of native bee populations. The goal was to continue making progress toward knowing what species are out there and where.

“What we are doing now is the beginnings of creating baseline data,” said Michael Ivie, an associate professor and Curator of Entomology at Montana State University.

Other states are far ahead of Montana in establishing a baseline of native bee species, he said.

About five years ago, Montana State University launched Wild Bees Montana, a 15-year campaign to identify and catalog species of the insects statewide.

Delphia, chief taxonomist for the project, has traveled the state to collect as many species of wild bees as possible and also has processed the collected samples.

Ivie described the results to date as mind blowing, with the count of known native bee species jumping dramatically.

“We started with 250 recorded,” Ivie said. “We are adding a lot, but at this point we do not know just how many we have. Our data indicate we might reach 750.”

The July 12 collaboration between staff from the Beaverhead-Deerlodge National Forest and entomologists from MSU served another purpose.

Jessie Salix, a Forest Service botanist, said collection training from MSU staff will help the Beaverhead-Deerlodge National Forest respond if the western bumble bee is listed for protection under the Endangered Species Act.

According to the U.S. Fish and Wildlife Service, the western bumble bee used to be one of the most abundant bumble bees in North America. “However, its population has experienced severe declines since the mid-twentieth century,” the agency reports.

And the collaborative work by MSU and the Forest Service will help the latter have a better understanding of what bees are on the Beaverhead-Deerlodge National Forest.

The survey teams assembled on the morning of July 12 at the Vigilante Station near the Ruby River. They gathered the gear they needed for collections, discussed survey locations and then piled in vehicles to wind up the dusty Warm Springs Creek Road to the Gravelly Range Road.

Delphia and Salix teamed up, accompanied by Abi Saeed, an MSU Extension Horticultural Specialist and a Ph.D. student in entomology.

Also assisting Delphia and Salix were three people from the Youth Employment Program in Dillon: Benny Bevil, a crew lead, Bella Glossa, from Dillon, and Kaitlyn Bragg, a crew lead.

The Gravelly Range often ranks high on lists of places in Montana that offer prime wildflower viewing from late June through July. The gravel road that follows the high-elevation crest of the range led the Delphia/Salix team to three collection sites that Salix and a Forest Service colleague had scouted the week before.

Salix noted also that Madison County has been “under-sampled” for native bees.

At the first site, Glossa and Bevil placed more than a dozen blue or yellow bowls in the midst of wildflowers and filled the bowls with water that included a few drops of dish soap. The colors attract bees and the soapy water quickly drowns them for later study. Bragg and Delphia hung a Blue Vane bee trap from a tree. It displayed the same blue and yellow colors.

At the second site, more bowls filled with slightly soapy water were distributed amidst a field of wildflowers of numerous species.

Finally, the team drove to a site that offered spectacular views and an abundance of flowering native plants. The bowls went out and a new type of collection tool came into play: the aerial net.

Team members stalked the wily bees. At first, there was a flurry of whiffs. That was especially true when trying to net a bee in mid-flight. But then the captures began. Bumble bees were among the species first netted. They vigorously protested with a buzz that sounded irate. Each catch was then gingerly deposited into a kill tube inserted into the net. Chemical vapors within the tube ended the buzz.

“Flowers attract and reward bees for their pollination service with sugar-rich nectar to fuel their flight and protein rich pollen, or bee bread, to feed their young brood,” according to the Forest Service.

Bumble bees can “buzz pollinate,” shaking loose pollen by landing on a flower and vibrating their flight muscles.

To date, 28 species of bumble bees have been documented in Montana.

Delphia said bee species cannot be reliably identified without a microscope. The goal for Wild Bees Montana is to carefully collect specimens for identification and study and add them to the Montana Entomology Collection, known as MTEC.

MTEC has some specimens going back more than 100 years.

The orchard mason bee has a robust, metallic blue body. It’s a solitary nester, using existing tunnels in dead wood and crevices in between stones.

The polyester bee lines its brood cells with a polyester-like material that allows the bees to nest along creeks and in moist soils.

The indiscriminate cuckoo bumble bee is reminiscent of a relative who comes for a weekend and doesn’t leave. Queens invade the nests of other bumble bees, kill the resident queen and force the workers to raise young parasitic bees along with the brood of the host colony.

Meanwhile, the field work last week in the Gravelly Range collected about 1,000 specimens of more than 50 species.

Delphia said the work amidst wildflowers and mountain vistas will be followed by many hours in the lab at MSU.

“We want these bees to be properly curated for study in 100 years,” she said.

Weed pullers not ready to surrender

Volunteers from the Calypso Chapter of the Montana Native Plant Society and allies turned out Thursday to pull noxious weeds from a trailhead at Pipestone Pass. The endeavor was part of the Adopt A Trailhead Montana program.

Theoretically, Powell County’s contractor can now resume construction of Old Yellowstone Trail. But Judge Ray Dayton cautioned that if the dispute about the road goes to trial and the county loses, it could be held responsible for restoring any disturbed lands.

Native plants are blooming in abundance in southwest Montana

A wet spring on the heels of a dry year seems to have fostered an abundance of blooming native plants in southwest Montana. 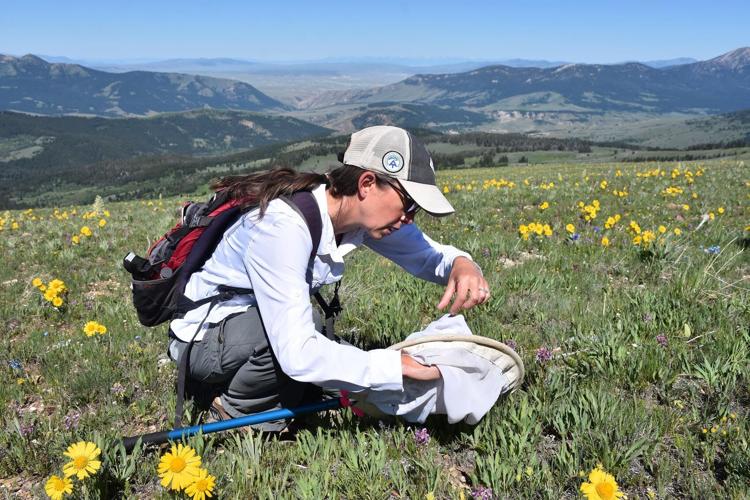 Casey Delphia, an entomologist from Montana State University, examines a bee she has collected with an aerial net during a bee survey July 12 in the Gravelly Range. She is surrounded by old-man-of-the-mountain wildflowers and other native plants. 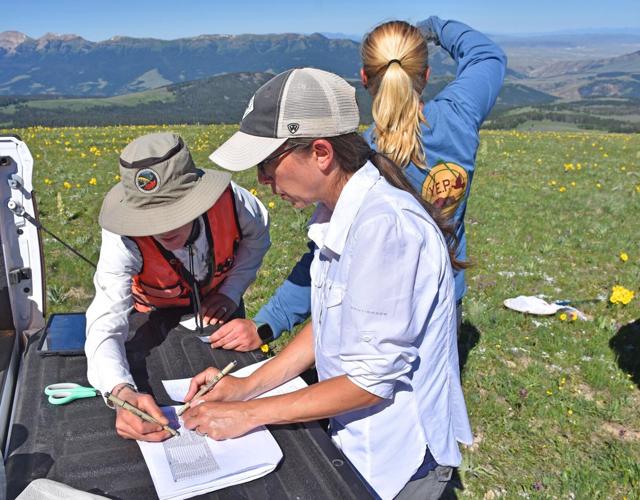 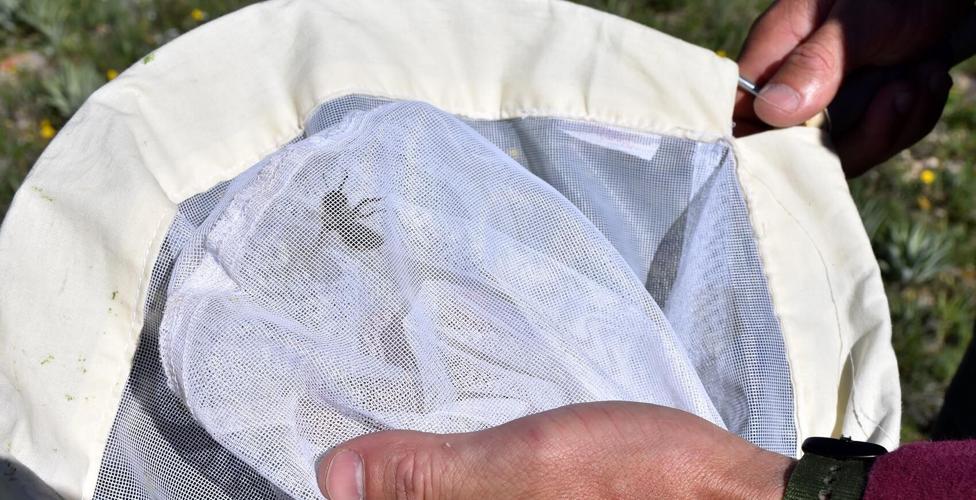 A bee specimen collected July 12 in the Gravelly Range will help inform the Wild Bees Montana effort to establish a baseline of wild bee species in the state. 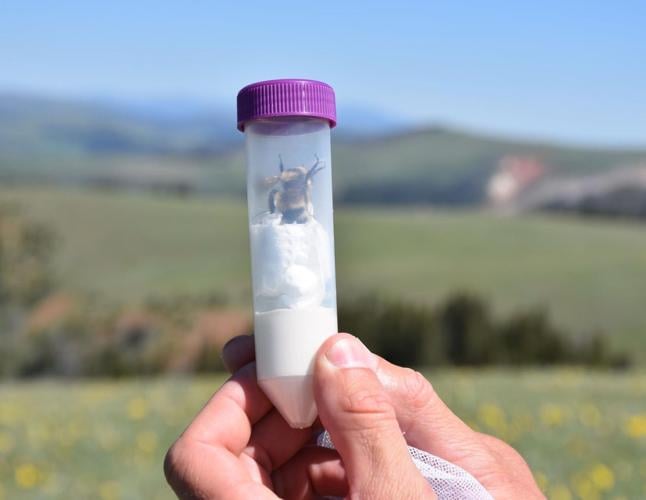 A bee captured with an aerial net July 12 in the Gravelly Range is collected in a 'kill tube' that contains ethyl acetate. Its vapors quickly kills the bee for later study. 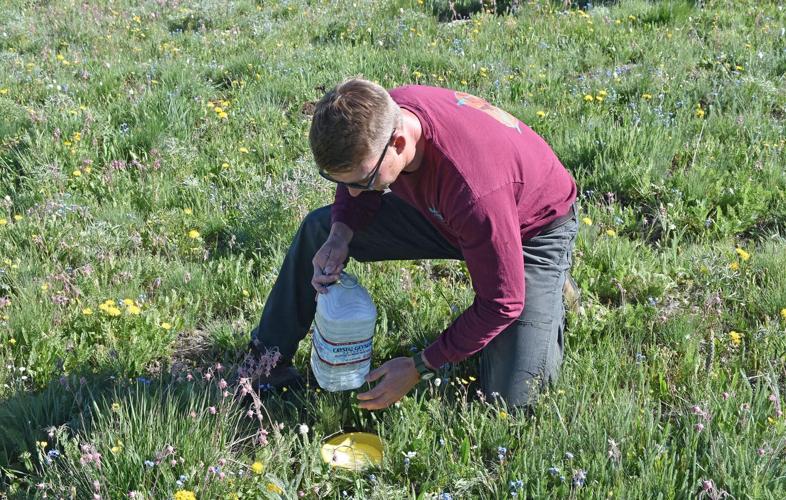 Benny Bevil adds water with a hint of dish soap to a yellow bowl in a field of wildflowers in the Gravelly Range during a bee survey on July 12. The yellow color attracts bees and the soapy water quickly drowns them for later study.