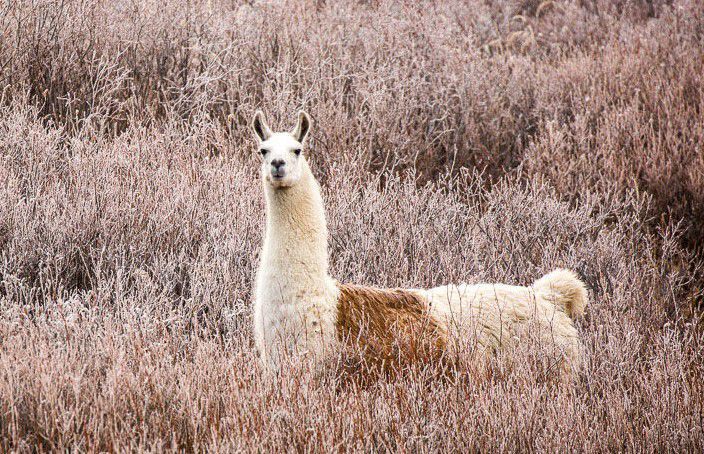 Ike, the 350-pound llama was used on packing expeditions pictured here in 2018, suffered an abscess in his mouth. Ike’s halter, at times, irritated the abscess, and guides would loosen the constraint to ease his discomfort. 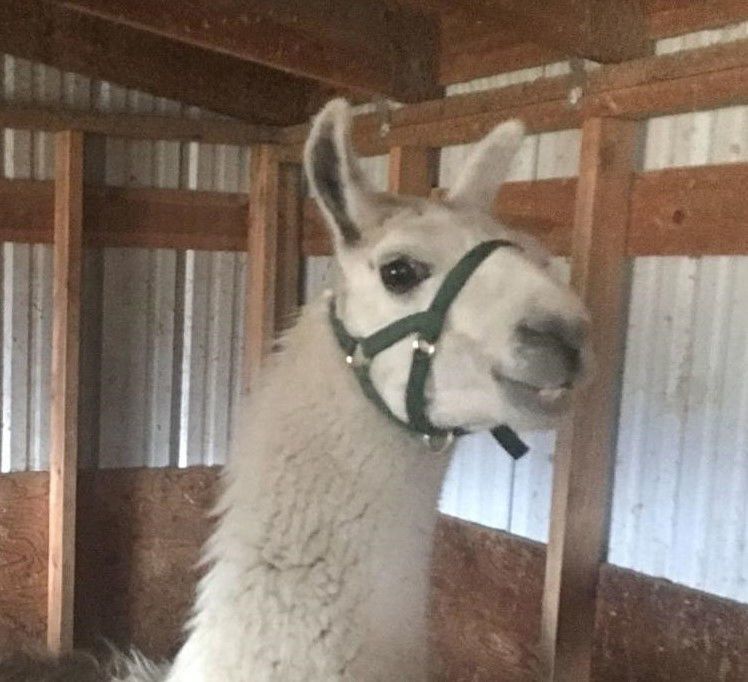 Ike, previously dubbed the 'runaway llama,' was captured in this 2018 photo by Susi Hüelsmayer, a self-described “llama person” who’s spent a quarter-century living with them.

DENVER, Colo. — Remember Ike the runaway llama who was on the lam in Yellowstone National Park for three months last year?

He made his way out by following a strategically placed herd of llamas owned by Yellowstone Llamas, which rents out the pack animals to tourists. But he wasn't in the clear. On Tuesday, nearly 11 months after leaving the park, he was brought by his owner to Fort Collins to take care of the cause of his escapades: A major toothache.

"He wanted to get out of a situation that was painful," said Susi Hülsmeyer-Sinay, Yellowstone Llamas owner, who renamed him Lewis. "When I rescued him, it was with a promise that I would also take care of him."

Lewis and crew schlepped to Colorado from their home in Bozeman, Montana, this week because of the reputation of Colorado State University's James L. Voss Veterinary Teaching Hospital. It's where famous, and non-famous, animals get treated. Country music singer Tanya Tucker took her dog Kona there when a tumor in his heart was discovered. The hospital treated the bucket-list puppy with a heart condition (though he died during open heart surgery). And it helped Marley the grizzly bear from Georgia who suffered from two broken elbows.

Lewis — named for Lewis Lake, where he was found — is right up there, at least when it comes to notoriety, the Colorado Sun reported.

An abscess in his mouth likely had bothered Lewis for years before he checked in for a midmorning surgery at CSU. Just like in humans, an abscess is a buildup of pus that forms inside the teeth or gums. It usually comes from a bacterial infection. No one knows when Lewis got it, but Hülsmeyer-Sinay said he may have been kicked in the mouth by another pack llama.

His original owner, Kirstin Baty, told the Jackson Hole News & Guide last October that her trail guides would loosen his harness to ease the discomfort. But in the summer of 2018, he "slipped out of the halter completely because he's sneaky and he knows he can," Baty told the News & Guide. His owners were unsuccessful at capturing him and Lewis became a mild internet sensation after his image was shared on Instagram.

Last October, with winter approaching, Hülsmeyer-Sinay couldn't stand it anymore. She got permission to get Lewis out of the park. Putting three of her own llamas on the trail, Lewis cozied up to her animals and followed them into the trailer.

"He actually followed our little group of llamas on his own free will. We never put a line on him," she said. "He wanted to get out of a situation that was painful."

After rescuing Lewis, Hülsmeyer-Sinay took him to the vet and Lewis was put on antibiotics. But when the infection didn't clear it up, doctors realized there was something more serious, even if Lewis didn't show that he was in pain.

"They are so stoic. They are animals that hide their injuries from potential predators," Hülsmeyer-Sinay said while in the operating room. "It looks like the adjoining teeth are also affected, so the infection has spread and they are going to take out the other two teeth as well."

As a member of the Rocky Mountain Llama and Alpaca Association, Hülsmeyer-Sinay was already familiar with CSU and its reputation for treating animals.

"Because of my association with a lot of llama people in Colorado, I know a lot of them bring them here," she said. "The vet-teaching hospital is very well known. The other alternative was UC Davis (in California) but that was much further. Colorado is the best place for Lewis and me."

The university's program and teaching hospital is well known nationwide. The school ranked third in the nation for best veterinary schools this year and has been among the top three for two decades, as ranked by U.S. News & World Report.

"I've used them for 30 years from time to time. No complaints. Everything that comes out of there is good," said Ron Hinds, who lives in Elizabeth and is treasurer for the alpaca association. "I know Cody, the teeny tiny alpaca, she was just up there not too long ago. She's well known around the country."

Last fiscal year, which ended June 30, the university program treated 46,984 patients. The majority were dogs (31,677) and then horses (6,637). There were also 181 llamas and alpacas, said Tim Hackett, a CSU professor of emergency and critical care medicine and a past medical director of the teaching hospital.

"Every day of the week we have interesting cases. There were days when we had three private jets at the Fort Collins airport for people who brought in their animals for treatment of heart disease or cancer," Hackett said. "You name it and we've probably done it with animals, with the exception of heart transplants."

Because it's a training hospital, the CSU facility takes in all sorts of creatures, though it specializes in "naturally occurring diseases," like cancer or heart disease in companion animals, he said. The work also can have an impact on treating humans for such as ailments like osteosarcoma, a bone cancer commonly found in large-breed dogs. It's less common in humans but behaves the same way, he said.

"The treatment used to be amputation, but by being able to save the leg by transplanting bone, we're able to provide some level of control over the disease and they get to keep the leg," he said. "When we see this issue so frequently, we can do a study because of the number of animals we treat."

But what is common in llamas and alpacas are tooth abscesses, said Signe Balch, a Larkspur veterinarian who treats the infection in camelids weekly.

"It happens because it's not an inexpensive surgery. You're going to have the llama anesthetized and in operating room for a decent amount of time. It costs money to do that," Balch said. "Owners have to make a choice, do they buy hay or take it in for surgery? This isn't a surgery done at the drop of a hat."

Sometimes the tooth falls out, which can solve the problem. Most of the time, the llama doesn't end up in surgery, partly because the llama handles the pain well.

"These guys, llamas and alpacas, for whatever reason function well enough with jaw abscess that they can often go undiagnosed," Balch said. "We have a lot of questions and few answers."

Hüelsmeyer-Sinay said she was nervous before his surgery. Wearing a pair of llama earrings for luck, she said she knew he was in good hands but, "It's always scary putting somebody under."

She said she also rarely spends this much on an animal — she has 14 other llamas back in Montana. And when she learned that the bill would be in the $4,000 range, her friends encouraged her to ask the public for help. As of 9:30 p.m. on Tuesday, the Go Fund Me campaign to raise money for Lewis' surgery hit $$3,813.

The tooth operation sounded dreadful. Because a llama's mouth is long, much like a horse's, it's difficult to do dental work. Doctors can't tell Lewis, "Open your mouth and say ahhh."

Instead, they drilled a hole into his right jaw from the outside to scoop out the infection and then started pulling teeth. Two of his back molars on the right jaw were pulled. A third tooth on the upper left also was yanked. All were severely affected by periodontal disease, according to the doctors who worked on Lewis.

After the four-hour operation, Lewis is expected to recover and go back to biting grass with his incisors, regurgitating the food and continue chewing it again with his remaining back molars.

Hülsmeyer-Sinay is astounded by the generosity of strangers who are helping fund Lewis' surgery. But costs will likely be greater now that more teeth are involved. She doesn't mind the extra cost, but said she can't afford llama dentures.

"It's funny you should ask (about dentures). I just got two implants in my own mouth," she said. "No, he'll be OK."

Genetic testing revealed that the young bull is of an exotic sub-species, and that it came from a herd more than 600 miles from where it was shot.

Woman pleads not guilty to threatening police, prosecutors and others

The Yellowstone County Coroner's Office has identified the man found dead in a city garbage truck earlier this week.

Woman who drove at officer gets deferred sentence

A Butte woman apologized for driving her car at a police officer and another person last August, telling a judge Thursday she made a big mista…

A Florida man who was pulled over on Interstate 90 near Columbus for driving 6 miles above the speed limit was arrested on Tuesday after a Montana Highway Patrol trooper found 78 pounds of meth in his rental car.

Authorities have arrested a fourth person accused of being involved in the fatal beating of a 12-year-old boy at his home in West Yellowstone.

Man pleads not guilty to assaulting a minor

A Butte man accused of dragging a girl down the street by the hood of her coat pleaded not guilty Thursday to felony assault on a minor and misdemeanor partner-family member assault.

Ike, the 350-pound llama was used on packing expeditions pictured here in 2018, suffered an abscess in his mouth. Ike’s halter, at times, irritated the abscess, and guides would loosen the constraint to ease his discomfort.

Ike, previously dubbed the 'runaway llama,' was captured in this 2018 photo by Susi Hüelsmayer, a self-described “llama person” who’s spent a quarter-century living with them.