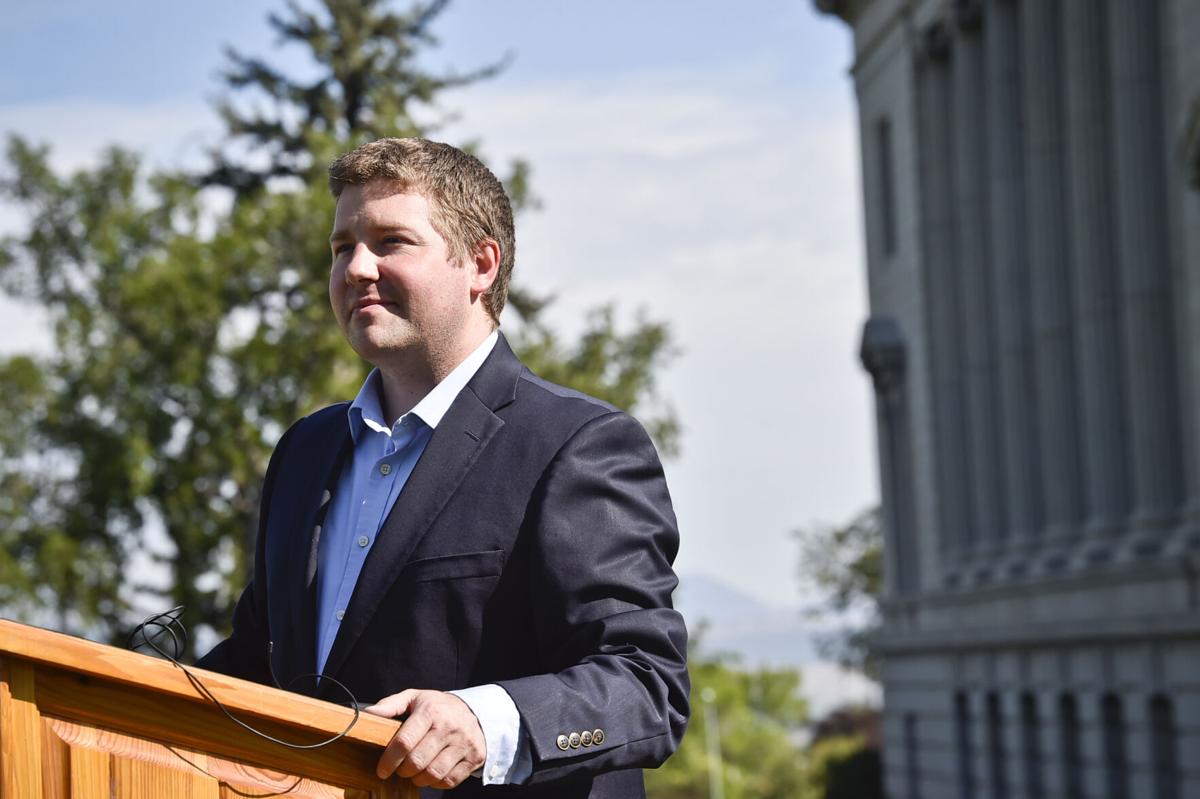 Democrat Secretary of State Candidate Bryce Bennett holds a press conference outside the State Capitol in Helena on August 12, 2020. 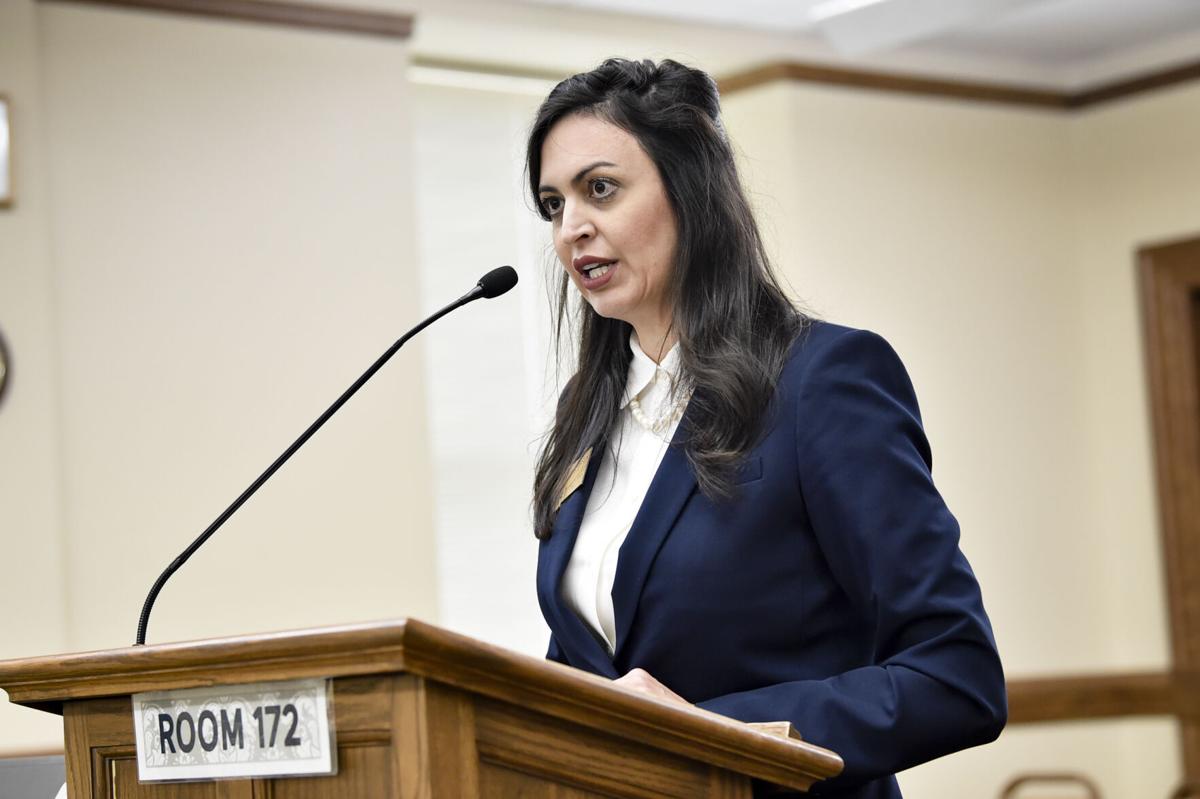 The candidates for Montana Secretary of State traded barbs of corruption and anti-Americanism on Sunday in a debate over who will fill the office overseeing elections and business registrations.

Jacobsen worked for U.S. West in the telecommunications industry before joining the Secretary of State’s office in 2017. Bennett has served in the Legislature for 10 years and worked for seven years at MontPIRG before that. MTN News political reporter Mike Dennison moderated the debate.

Both candidates came out swinging, with Bennett using his opening question to accuse Jacobsen and incumbent Stapleton of “corruption and incompetence” involving government contracts to political donors, misuse of state-owned vehicles and nepotism. Jacobsen countered that Bennett was “anti-gun, anti-life and anti-business.”

Asked what they’d done to warrant the job, Jacobsen touted the reduction of office staff from 60 to 40 employees while reducing customer wait times and expanding automated business registry services to 24 hours a day, seven days a week. Bennett rebutted that those actions had “gutted the office” and made it harder for businesses to get their paperwork completed.

Bennett said he supported automated voter registration as a way of making it easier for Montanans to vote, and that he would push back on any attempts to suppress voting. Jacbosen said the only voter suppression she saw was from Bennett, “who’s pushing for all-mail ballots on reservations, trying to take away the right for people to vote in person.”

Dennison then asked Jacobsen what evidence she had Bennett would allow people to cheat in elections. She pointed to Bennett’s support of automated online registration, which would allow fraud. Bennett countered that the current Republican administration had been “asleep at the wheel” and slow to request help from a National Guard cyber-security unit or experts from the private sector to keep hackers out of the state election system.

In her direct question to Bennett, Jacobsen accused him of being “anti-American and an advocate of defunding the police.”

Bennett called that a lie and something he’d never said. He also linked her to the office’s publication of an error-riddled voters guide, which costs hundreds of thousands of dollars to redo.

Jacobsen appeared to misunderstand a question from Dennison about whether she supported a lawsuit brought by the Trump presidential campaign and the Republican national and state campaign committees challenging Democratic Gov. Steve Bullock’s order allowing Montana counties to choose all-mail ballot formats.

“We continue to operate with lawsuit after lawsuit in our office, and my only goal is to do exactly what the law requires the Secretary of State to do,” Jacobsen said. Asked a second time if she supported or opposed the Trump Campaign lawsuit, she replied the office had faced 12 different lawsuits in the past three years. Stapleton is named as a plaintiff in the Trump lawsuit in his position as Secretary of State.

Bennett called the lawsuit “partisan politics at its worst,” adding that no Montanan should have to choose between their health and their right to vote.

The Secretary of State sits on the five-member Montana Land Board. Bennett said he looked forward to fighting special interests who’ve called for selling those state trust lands to the highest bidder. Jacobsen said she believed state trust lands existed to generate revenue for schools, and she supported natural resource development along with public access to those lands.

Dennison asked why, in a time of deep partisan politics, someone should consider voting for an opposing party for the office. Bennett said he’d been endorsed by both Democratic and Republican former secretaries of state and had a record of bipartisan compromise in the Legislature. Jacobsen said she stood for the values of “life, pro-gun, pro-business and free enterprise.”

Another 217 COVID-19 cases and the COVID-19-related deaths of two more people were reported Thursday morning in Montana.

RAPID CITY, S.D. — The South Dakota Attorney General reported hitting a deer Saturday night but had actually hit and killed a pedestrian whose body was found the next morning, according to the Department of Public Safety.

Another 190 COVID-19 cases in Montana were reported Wednesday morning on the state's mapping and information website.

About 60 Montana schools have had COVID-19 positives. Have they been contained?

Positive cases in schools appear "inevitable." Stopping them from spreading widely is possible, but not guaranteed. It requires careful planning and a swift response, officials said. Continuing in-person classes depends on it.

Another 139 COVID-19 cases in Montana were reported Tuesday morning on the state's case mapping and information website.

“I’m glad we didn’t do this 30 years ago because there were a lot of things different back in those days. The regulations were not as stringent, people’s mindsets were different and I think we’re doing a far far better job of it now than we probably could’ve conceived of 30 years ago and I’m very glad for that.”

Vice President Mike Pence promised more tax cuts and continued crackdowns on violent protests occurring elsewhere in the U.S. as he urged Montana voters on Monday to expand the Republican party's rising dominance in the state.

A split Montana Supreme Court decision on Wednesday reversed the two negligent homicide convictions of a former Bitterroot pharmacist convicted in 2018, but upheld other convictions stemming from over-prescribing of opioids to his patients.

Democrat Secretary of State Candidate Bryce Bennett holds a press conference outside the State Capitol in Helena on August 12, 2020.