A group of roughly 100 health professionals has sent an open letter to Republican gubernatorial candidate Greg Gianforte chiding him over various actions regarding COVID-19 precautions.

In response, Gianforte’s campaign said the letter was an attempt to politicize public health.

The letter was sent Friday to Lee Montana Newspapers and included 111 names of nurses, doctors, caregivers and public health professionals.

First, he appeared at a Lewis and Clark County event Oct. 3 that the health department said violated COVID-19 restrictions. Citations were expected.

Second, he arrived at an Oct. 6 gubernatorial event without a face mask. The letter cited a Twitter video from Caroline Harding, who posted beneath the video a request for donations to Democratic gubernatorial candidate Mike Cooney. Cooney is the current lieutenant governor.

Third, at a recent campaign event in Helena he quipped that, when asked at a separate event if he was shaking hands, he said he’d hug the man if he wanted.

“Mr. Gianforte — this isn’t a joke — it is nothing less than a matter of life or death,” the letter stated.

The letter effort was led by Jacquie Helt, a public health advocate in Missoula, and Cora Neumann, a Bozeman consultant with a Ph.D. in public health. Neumann, who runs public health advocacy organization We Are Montana, also announced a bid as a Democrat for U.S. Senate in 2019 but dropped out when Gov. Steve Bullock joined the race.

Neumann penned an op-ed in August supporting the Bullock administration's response to the pandemic, urging support for Cooney as the better public health candidate in November, and criticizing Gianforte's comments on the pandemic, saying he "downplayed" it.

"Greg stands with them now, as he stood with them when he secured more funding for them in the CARES Act. Greg takes necessary precautions, including social distancing and wearing a mask. Overcoming this virus and its economic fallout is serious, and it’s a shame a failed, liberal Democrat candidate for U.S. Senate is politicizing public health for partisan gain."

At a campaign stop in Billings on Thursday, Gianforte wore a mask except while speaking to the crowd and opted for an elbow bump instead of handshakes. 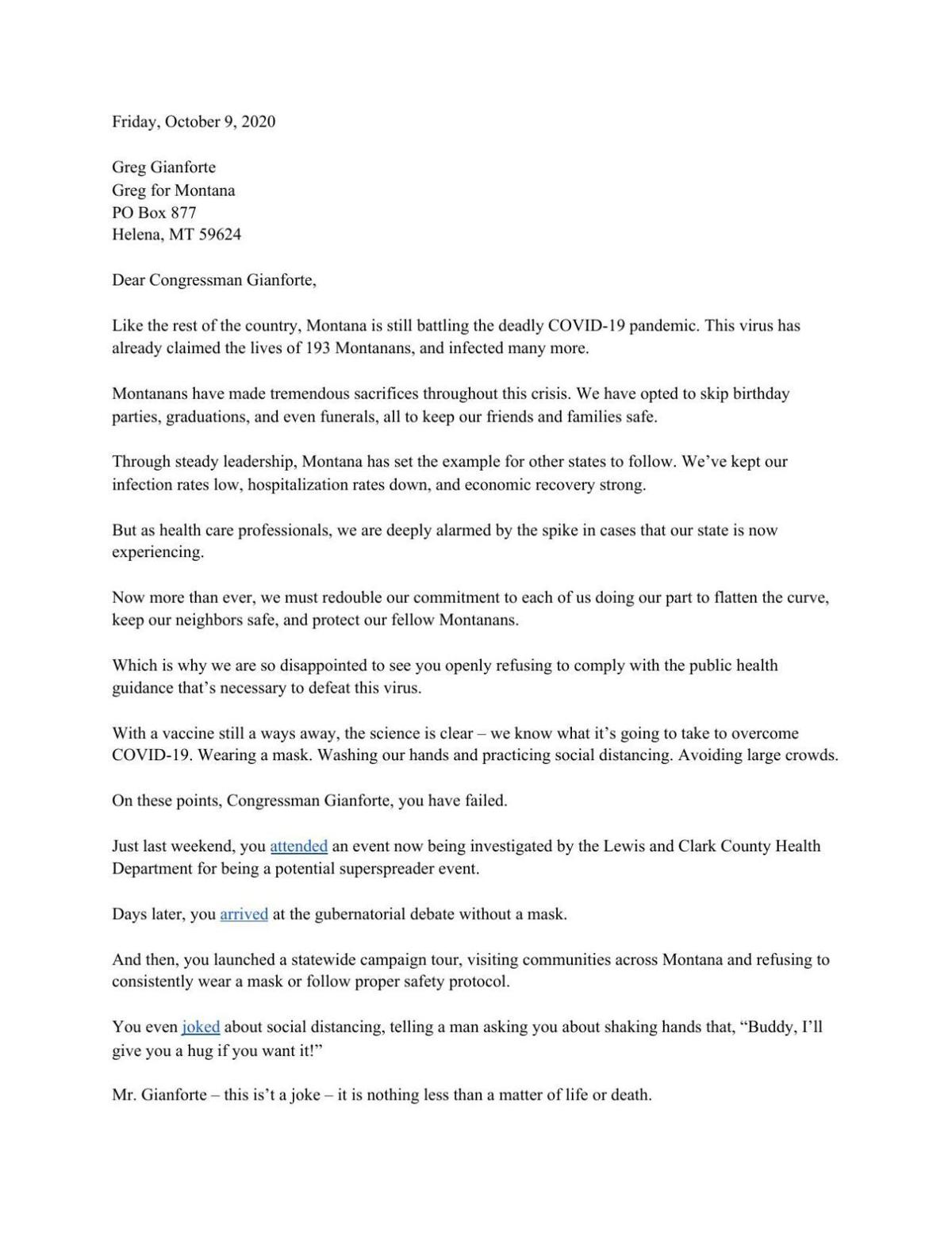 Another 530 COVID-19 cases were reported Tuesday, bringing the number of active cases in the state to 7,774, according to the latest update provided by the state's Joint Information Center.