Republican congressional candidate Ryan Zinke remains a consultant for a gold exploration company but dropped his work for several other private firms, according to a disclosure report filed Tuesday.

The former congressman’s latest financial disclosure included few other changes from his prior report, filed in November. He reported income between $370,000 and $486,000 so far for 2022, most of which came from consulting work and rental income. Congressional candidates report their incomes, assets and liabilities in broad ranges.

Zinke faces Democrat Monica Tranel, a Missoula attorney, in his bid to represent Montana’s new western congressional district. Tranel filed her 2022 disclosure on the May 16 deadline. Zinke’s campaign previously said it lost track of the deadline to file this year.

Zinke has continued to work for U.S. Gold Corp. this year, according to the report. The firm describes itself as a “U.S.-focused gold exploration and development company” active in Wyoming, Nevada and Idaho. He is being paid $68,000 per year for that work.

Campaign spokesperson Heather Swift said via text message Wednesday that Zinke ended his consulting work for several other companies, including oil giant ConocoPhillips, at the end of 2021. He continues to earn a $100,000 salary through his consulting company.

Zinke previously served as the Secretary of the Interior under the Trump administration. In that position he earned praise from the natural resources industry for pursuing rollbacks of restrictions on oil and gas drilling and loosening rules meant to curb greenhouse gas emissions.

The value of Zinke’s assets increased slightly from his prior report, and amount to between $8.7 million and $35.6 million. Most of that is in the form of rental properties in Santa Barbara and Whitefish. Zinke’s opponents have honed in on his family’s out-of-state property holdings to suggest he isn’t actually a Montana resident. The Whitefish native has maintained that his primary residence remains in the Flathead despite his wife claiming California residency for tax purposes.

The range of his liabilities also grew slightly, with his total debts reported at between $1.8 million and $6.6 million.

The letter to FEMA said that a preliminary evaluation shows there were 23 majorly damaged or destroyed residences in Carbon County, 53 in Park and 39 in Stillwater.

Up to $5 million in grant funding from Montana’s bed tax fund is being made available to businesses impacted by the destructive flooding in southern Montana, Gov. Greg Gianforte’s office announced Friday.

Convention of States Political Fund, a conservative political group that advocates for amending the U.S. Constitution, was found to not have disclosed more than $125,000 in primary spending.

With an eye on the U.S. Supreme Court, Montana abortion clinics prep for out-of-state patient surge

Abortion is constitutionally protected in Montana. An expected reversal of federal abortion protections could increase pressure on local abortion providers.

"This is going to do nothing but make things worse," the correctional officers' union president said Monday. "We're all barely holding on as it is."

The biggest star in our galaxy is about to die, here's what that means for Earth 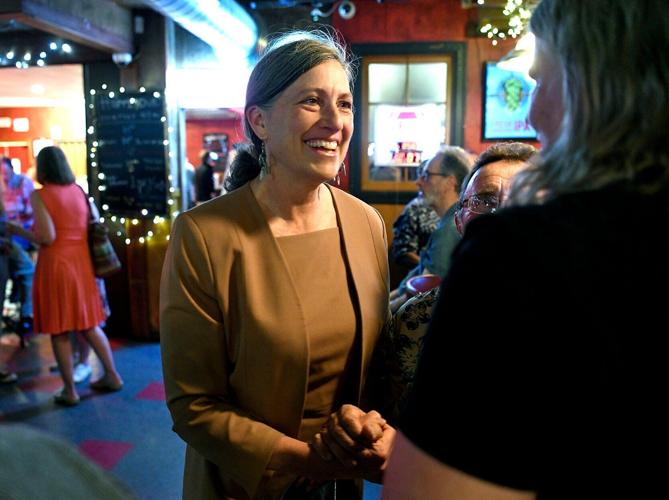 Monica Tranel celebrates her primary victory win at the Union Club in Missoula on June 7.