WASHINGTON — A single House race in Montana could determine the presidential election.

Or it could be one in Minnesota. Or Pennsylvania, Florida, Michigan or even Alaska - all districts where Speaker Nancy Pelosi has set out to not only expand the House majority but to tip party control of the states' congressional delegations in case a disputed presidential election needs to be decided by the House.

It's a stunning campaign strategy to match the extraordinary times. Under election law the House would intervene if the Electoral College gave no presidential candidate the majority Jan. 6. Preparing for that unthinkable reality, Pelosi is openly working to block President Donald Trump's advantage if, as he has suggested, he ties up the results of the Nov. 3 election.

Pelosi has been issuing stark public warnings to the president not to go down down this path.

"There ain't no light at the end of the tunnel in the House of Representatives," Pelosi said at a recent press conference.

"Just skip it," she said again Tuesday in New York. "It is a train coming right down at him."

Not since the 1800s has a presidential election ended up being decided by the House. But in the visceral political climate of 2020, there's a growing concern about various chaotic scenarios in the race between Trump and Democratic nominee Joe Biden.

Ahead of the election, Trump has refused to say whether he would uphold the nation's tradition of a peaceful transfer of power in the event he loses to Biden - prompting some in his own party to vow that voters' wishes will be followed.

At a campaign rally in Pennsylvania, Trump suggested he might lean on his "advantage" in the House to help deliver him a second term.

"We are going to be counting ballots for the next two years," Trump said at the Sept. 26 rally following a Rose Garden event at the White House days before he was diagnosed with COVID-19.

The House is already controlled by Democrats, and not expected to switch this fall, but Republicans actually control of the majority of 50 state delegations to the House. That's what Pelosi is out to flip.

Pelosi said she had been working "sub-rosa" on her plan for some time but decided to go public once Trump did, too.

"It's sad we have to have to plan this way," she wrote in a letter to colleagues the day after his rally remarks, "but it's what we must do to ensure the election is not stolen."

Under the 12th amendment to the Constitution, each of the nation's 50 states gets one vote for president for their House delegation. The president can be selected by a House majority - 26 states - if the Electoral College deadlocks or is unable to agree on the winner. Jan. 6 is set by federal law as the date for the tabulation of the electors' votes.

As it stands, 26 of the state congressional delegations in the House are controlled by Republicans, 22 by Democrats. Two - Pennsylvania and Michigan - are essentially tied.

Since it's the new Congress seated Jan. 3 that would be called on to resolve an Electoral College dispute, Democrats are eyeing states that are tied or where Republicans hold a slim majority to deny Trump's hold on the delegations. Under Pelosi's strategy, Democrats don't need to reach 26 states, they just need to knock Republicans down by one - to 25 - to prevent Trump from having the majority.

Their map includes about a dozen races that dovetail with candidates in the Democrats' "Red-to-Blue" program that's trying to flip Republican-held seats, according to a Democratic strategist granted anonymity to discuss the planning.

The most likely options are in Pennsylvania, where Republican Rep. Scott Perry faces a tough reelection against Democrat Eugene DePasquale, the state's auditor general, in the Harrisburg-area district. There's also Michigan, where Democrats are trying to tilt the delegation by seizing the Grand Rapids-area district where Rep. Justin Amash, the independent aligned with Republicans, is retiring.

There are opportunities in Florida, where Republicans have a one-seat majority, and in Texas, where Democrats would need to sweep five seats to tip the state. And in states with a single at-large House representative.

Another is Montana, where Democratic state Rep. Kathleen Williams and Republican state Auditor Matt Rosendale are vying for the state's lone at-large seat.

Jacob Rubashkin, an analyst at the nonpartisan Inside Elections, said the at-large races could be Democrats' two "best targets" in what otherwise is an "uphill climb."

One new uncertainty emerged in Minnesota, where Rep. Angie Craig, a Democratic freshman seeking reelection, is suing to prevent her race from being postponed to February after the death of the Legal Marijuana Now Party candidate. Under state law, if a candidate with major party status dies within 79 days of Election Day, the contest shifts to February. That could cost Democrats control of the Minnesota delegation.

Pelosi's strategy is one of many scenarios playing out as the parties brace for an election like none other, punctuated by the coronavirus pandemic, grave economic stress and president's refusal to adhere to governing traditions and norms.

Rather than calm the nation before a heated election, the president is fueling doubts about the legitimacy of the vote. He repeatedly says the election is "rigged" as election officials brace for an onslaught of mail-in ballots, even though one study showed voter fraud is so rare there's a greater chance of being struck by lightning.

"History is that you do know on election day," he said. He says there's a less than 50-50 chance the election drags on for week and gives the "chaos theories" a less than 1% probability.

"It's a low number," he said. But, "it's much higher than people have ever contemplated."

There have been no commanding Montana rallies this time, no President Donald Trump swooping down in Air Force One on four separate occasions, breathing hot MAGA fire to ignite Republicans on Matt Rosendale’s behalf.

If Montana’s campaign for the state’s lone seat in the U.S. House of Representatives seems familiar, it’s because both candidates have been he… 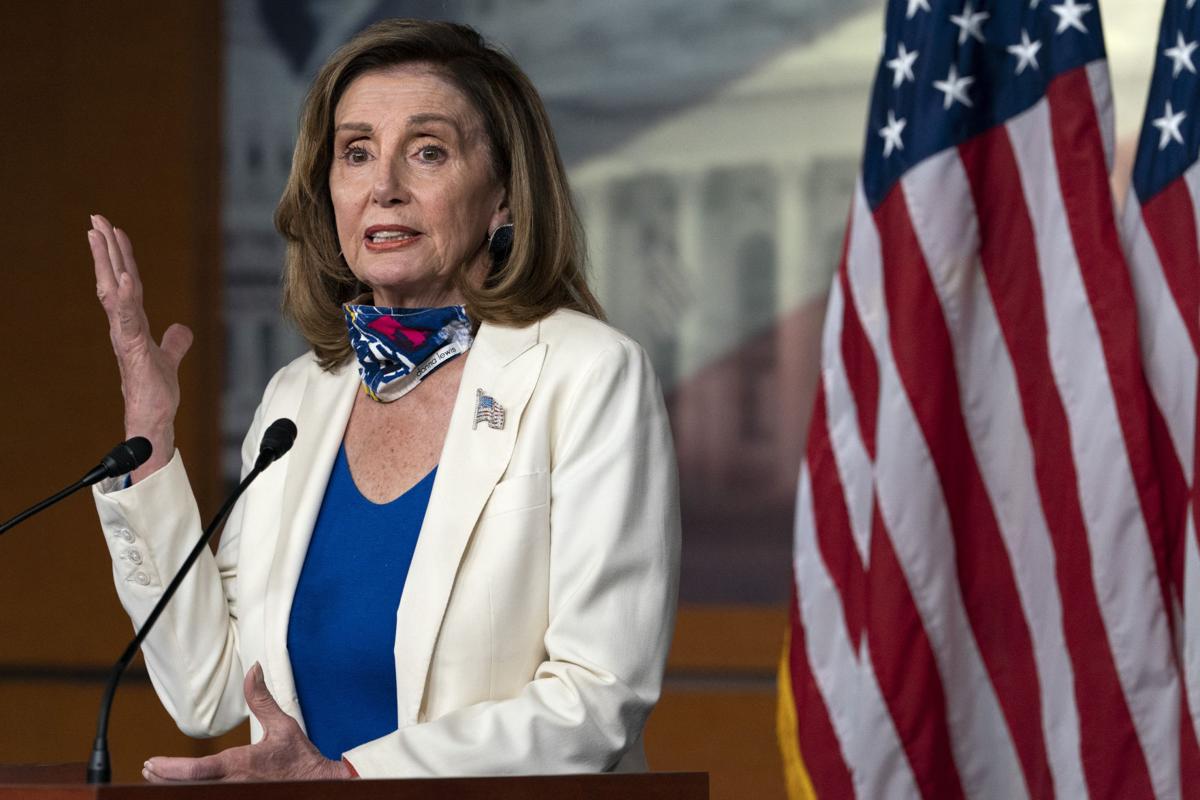 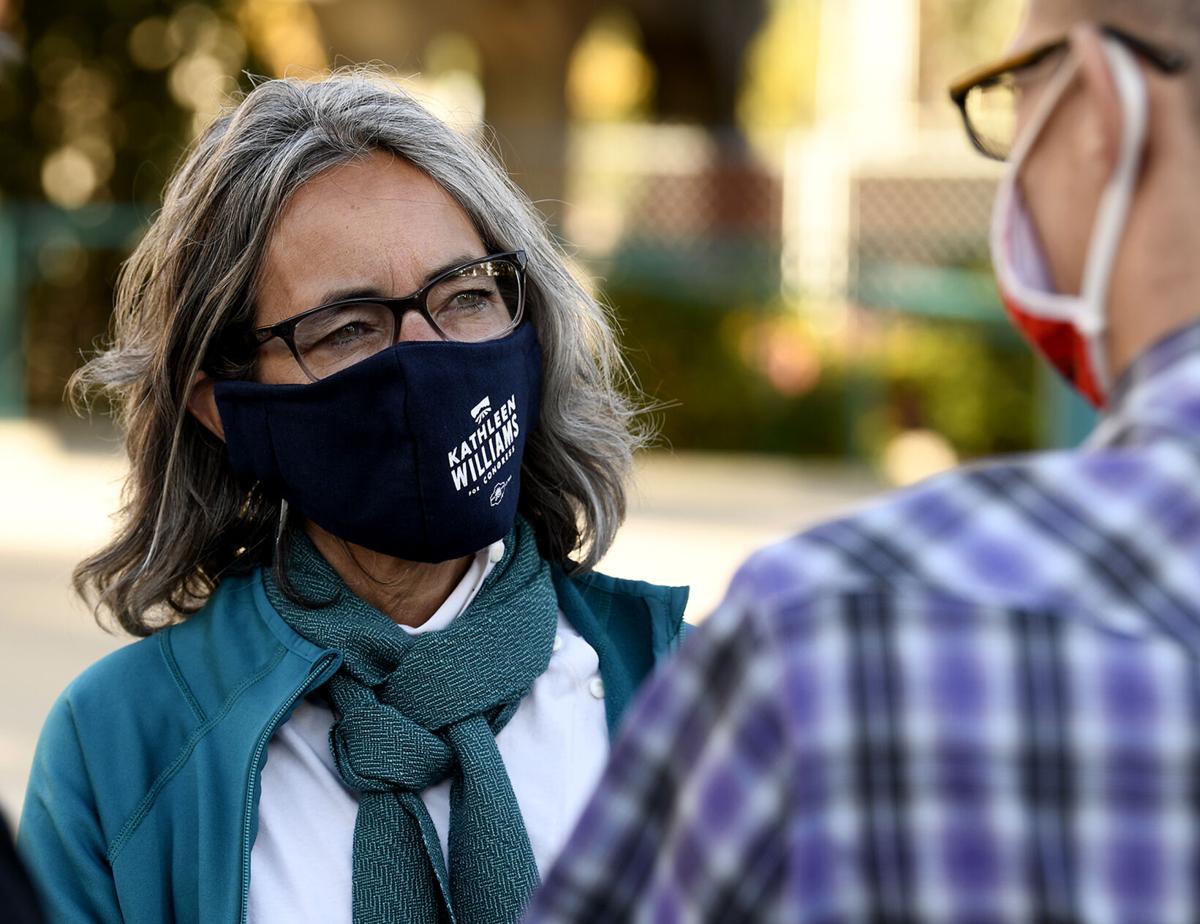 Williams talks with a supporter after her speech in Caras Park in Missoula on Monday.